I received my Crown 3 today! Nanchaku Mod is next. Anyone else here winner of the 2 year giveaway?

I got mine in the mail today, beautiful blue

I’m excited to try it! 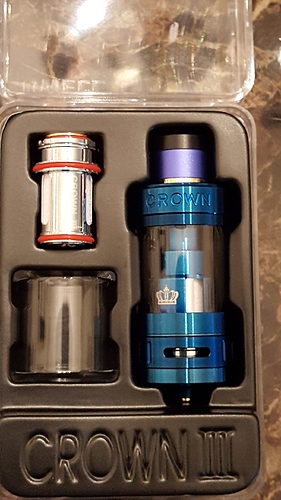 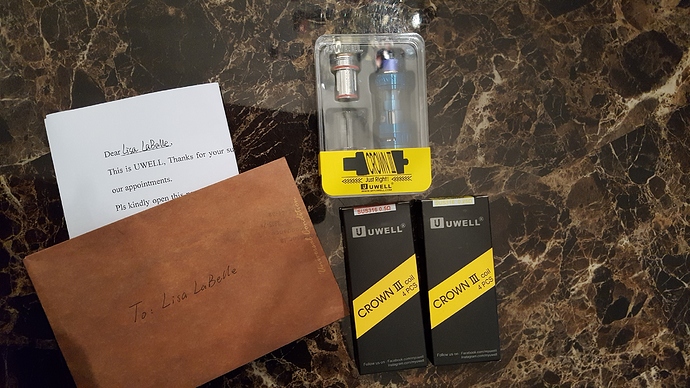 did you have the original ? id lovebto know how the 3rd version compares the 2nd imo was a flop im hoping this one is as good if not better please let us know tu

Yes, I have all 3. I hated V2 at first too. After about 4 months they finally got the coils right and I’ve been enjoying it since. I also love the mini, which uses the OG coil.

I will let you know when I try it. The coils are much larger, about twice the size of the OG’s, and they drop in like the Estoc tank. I will trying it later tonight.

Ohhh! Nice! I’m jelly! I’ve been rocking my D1 for the last month and really loving the flavor I’m getting from this! I’ve always been a crown v1 fan as well! The D1 is great and the coils last forever! I’m so shocked at how great this is and I feel like I got a great deal on the coils from vaporworld when they had they’re sale last week $3 for a 4pack

can’t wait to hear your review on this one! I was looking at they’re website last week wanting to pre-order it!

They have the Crown 2 on sale at 101vapes for $9.99 right now also. The flavor is outstanding also but the coils only last about 2 weeks.

That’s not bad…2 weeks is great! The baby beast seems to only last about 8-10 days depending on how much I vape and what I’m vaping. I always keep my sweetener around 0.75%. I just ordered 2 crown 2’s. I grabbed the new color!

I liked that irridescent black also. But, I don’t use sweetener, so they may not last 2 weeks with it. I have had some that last 4 weeks. Rarely though.

What did you have to do to win? Hell, free stuff for 2 years! That dont even sound real!

It was back before xmas. We had to answer a survey on their products with suggestions on improvements, and 50 winners were chosen. Not sure if it was random or how it was judged. I have found 4 or 5 others on another forum that also won, so far a black one with red and blak drip tip and SS with a green drip tip.

I have both the v1 and v2 Crown tanks. Actually I have 2 v1 and a v2 love them, the v2 was at first not quite as good as the v1. Maybe I was expecting too much I don’t know, however the v2 kinda grew on me and found myself using it more and more. Now a day doesn’t go by that I am not using either one or both Crown tanks with one of my many mods. I heard about the version 3 Crown tank, just that no real specks, what kind of coils it has how much juice it holds, I’m anxious to hear how well it preforms over the first 2 versions of this tank, what are the major differences other than coil size as you stated. I know beyond a shadow of a doubt good or bad I’ll get one, unless its really really bad then I’ll think about it.
I like that blue that is sharp as hell, it would look great on my iPV5 if it wasn’t so scratched up and a lot of the paint is coming off. I may sand it down and repaint it.with what kind of paint not sure rustoleum lol. Seriously though no I wouldn’t use a cheap paint, maybe have it painted. Any way I am curious as to how well the new Crown III stacks up to the first 2 versions, especially the 1st as that is the measure by which I judge my best sub tanks. Are there better ones…mmmmmm…maybe, only if you;re using and RDA or an RDTA, Just my thoughts on that subject.

So far it’s got great flavor, very comparable to the V1. And I love the looks and design.

But overall, I have to admit I’m disappointed. Not because it’s a bad product. Great flavor, quality build, coils seem to be lasting quite a while. But it doesn’t match my vaping style. This is built for higher wattage vaping, and I like 30-40W depending on which tank and juice I’m vaping.

I will be taking it up to 65-70W once just to test. Also, I had some leaking issues with the first coil, but it was resolved quickly with a little fiddling. Removed the coil and made sure all the o-rings were seated well, then made sure to twist the coil slightly after seating it even though it’s not threaded. Just to make sure it was seated thoroughly. Haven’t had a leak since.

I am really really hoping they come out with some new coils for us lower wattage vapors for it!

that sucks i like a .4 or .5 coils so i could vape between 45 and 60 hardly ever 60 but its an option , companies need to start thinking about the 50watts range more than the 100

Ohhh, and it guzzles juice…even at 55W.

I’ve been waiting for uwell to come out with a decent single coil rda for they’re tanks. You know kind of like the crown 1. I dont do vertical coils either

this just convinced me to go ahead and get 2 more crown 2’s from 101 vape! Thanks for your review!

As have I, although my usual is around 3 weeks plus a couple days at times. It depends on what I’m vaping at the time, I try and vape the same thing an have a plentiful supply of hazelcakes from ohmsvapes.com. That said I usually run the .5 ohm coil in V2 and don’t generally go much above 42-43 watts. The juice starts to taste burnt the voltage is high up around 4.9 - 5.0 volts which I REALLY dislike. But…if I drop the voltage down then the wattage is around 35 - 37 watts which is a tad low for me. So it just depends on what I’m feeling like what mod I use with the V2 on and on we go.

Absolutely! I’ve been thinking this myself for some time now.

Yea, all too often now these companies will make their sub tanks and coils for 70-200 watts but forget about the new or those of us who like low to medium wattage up to maybe 65 watts. I rarely go over 55 watts once i a great while I might hit 60 watts but that is rare. I think that if a company could come up with a great tank that would give you flavor and/or clouds up to maybe 65 watts and held somewhere around 5 -6 mls. of juice it would be pretty decent me thinks.
True the Crown and Crown II are great tanks but don’t hold near enough juice. I like my Crown tanks I like my Tobeco Super Tank and my SMOK TFV8 Big Baby Beast both of em. I have a handful of other tanks I like but there again only a couple out of all my 30-40 different tanks hold 5 ml or more, or they might hold a goodly amount but you stick a .2 or .3 ohm coil and a lot of my juices are good up to 40-45 watts or 3.7-3.8 volts after which it just starts to taste burnt or just tastes nasty. One of these days though there will come a sub tank that will meet all my requirements, at least I can dream can’t I?

It’s been vaping like a champ at 60w. Doesn’t get to hot for me, and it has perfect vapor production for my tastes. It’s a nice smooth warm vape at 60W, seems to be my sweet spot. I am actually enjoying it now. With these coils, the warmth and draw, flavor production is very similar to what I get from the other tanks at 35w. Just changed first coil tonight, so it lasted approximately 5 weeks? Nice go, will have to see if this next one also lasts a long time. Very well built and machined tank, quality all the way.

EDIT: @fidalgo_vapes, have you gotten the new Cleito in yet?