I want a cigarette!

Oh yeah, you read that right. I want a cigarette! Well I did want one the other day. It was a very strong urge. But like I’ve been doing for a good long while now I resisted the urge and instead enjoyed a nice tobacco vape.

It got me thinking. I can’t possibly be the only one who deals with at least some level of cravings, even after months or who knows, years of smoking cessation. My mother quit cold turkey about 6 years ago and she still mentions cravings hit her from time to time. That really speaks to the power of the addiction!

I’ll admit, I was a dual user for a good while. But when I first started vaping I had no support. So looking back on my path and seeing the twists and turns, I felt it would be good if we could share our experiences with being overcomers.

For me, the biggest road block was always poor equipment. I think @OpenlyVapor can relate to this, and that’s a good example of what happens when one doesn’t have the equipment that will perform at a level to achieve satisfaction.

Once I got decent equipment, managing the cravings became easier and easier. And for periods of time…weeks, months even…I wouldn’t even think about a cigarette. But every so often that monster sticks his ugly head up and tries to hypnotize me again. When that happens and it’s a really strong craving I typically resort to some tobacco vape I have that’s higher nic concentration, and I use my Nautilus Mini tank so that everything I’m doing…the taste, the nic, the draw, the amount of vapor…most closely resembles smoking a cigarette. So far this has worked every time. And not once have I had to puff on the Nautilus an entire tankful. Usually it’s just for a little while and the craving subsides.

How about you? Do you still get those monster cravings? How do you cope with them? What piece of advice would you find most helpful for someone who is having a bad craving day?

Absolutely. Maybe not monster cravings, but I definitely have the thought on a relatively regular basis of “I want a cigarette…” It’s been about 3 years since I last smoked one. I can smell anytime someone in the neighborhood lights up. LOL. It’s not like I really WANT a cigarette—I know how awful it will taste and how terrible they make me smell and how I’d feel afterwards. But, the thought is still there. Like you said, the power of addiction. And how I cope is pretty much reminding myself of everything I just said and then taking some good lungfuls of a juice I really love…like your strawberry cheesecake shake.

Definitely. I finally quit 1/10/15 after struggling with vapor products and juices for almost 5 years, trying very hard to quit with no success. Finally got a mech mod, a sub-ohm tank and an rda and that did it. 3 days after that purchase, I was smoke free and have been ever since.

But yes, I still get that ‘craving’, even that ‘monster’ craving now and then. It gets more rare for me over time, but I deal with it the same as you. I grab my Nautilus on my Provari with 12mg of Tribeca tobacco flavored ejuice (I’m normally @3mg nic) and take a few pulls. Take a few deep breaths, and I’m good to go again.

My father, who smoked for about 40 years too and quit cold turkey 10 years ago, told me to expect it. He still has cravings too now and then. He shells and eats raw peanuts to get thru it.

In 17 months the last major urge I caved and got sick half way through the “stinkie” cigarette. No urges since. Smoked 2 packs of menthol a day for 30yrs so there is hope and tried everything to quit and vaping has alowed me to live longer and given me many more benefits. Hang in there…urge will pass.

100% agree!! 3 times already. First time when my equipment went down I INSTANTLY returned to cigs. On the 2nd try I thought it was ejuice… went out and bought flavors and VG mixes… again returned was faulty junk to blame ( 510 ego batteries, and CE4 atomizers ) 3rd try at this and Ive been off for about a week, but I got a craving the other day ( due to stress) I think if we have good equipment- ejuice. That should tackle most of the cravings. I think what could make us want a cig is stress… Sometime I want a cig due to work or life’s complications.
Anyway I cant write too much about this cause Ive been barely smoke free for a week.
Has buying and getting the good equipment more less nailed smoking in the bud for you?

Has buying and getting the good equipment more less nailed smoking in the bud for you?

They say you can never quit quitting. I think this is so true.

That is very encouraging to hear. I don’t want to smoke again, I got better equipment and what you sent should give me a huge boost. I know 1.5+ packs a day is just killing me. Hell at this point even if I smoke 5 cigs a day is much better than 1.5 packs… I did smoke 1 cig when I woke up today. My main problem is that "just awoke cigarette’ That is when I really want a cig. I’m doing my best to kick the habit completely and I am determined this time, and so far I’m 95% off of cigs.
Do you have major cravings when you just wake up? Thats where I suffer… After the morning cig I go all day without one.

One little tidbit and something I didn’t know early on that would’ve helped… Stay Hydrated!!! It really does help with the cravings. I made it a new habit to put a glass of water next to the bed so when I awake, first thing I do is drink that water. I know it seems like such a basic, silly thing, but it really helped me tremendously.

I see. Good advise I’ll do that. Water… That’s the key…so simple. What do you do about the ‘just awake craving Alisa’? You just drink water, and then vape?

Have the urge to smoke also. Then remember how bad the last one tasted. My last flavor order got a tobacco flavor. Think you are on the right track. A tobacco juice that’s has a higher nic than normal.

I still get that now and then. Like I said earlier, I grab my Nautilus and vape that 12mg tobacco flavored ejuice. It only takes 3 or 4 pulls and I’m good to go.

I smoke 1-5 cigs a day still. And they taste so bad compared to my ejuice, yet I still freaking smoke em. Maybe I need a tobacco flavor? I bought so many DIY flavors yet have no tobacco flavors. OK, water, and tobacco flavor… This may nip my smoking completely in the bud!

The other thing I did, that you may HAVE to do if you really want to beat Big Tobacco, is just get stubborn. Don’t buy that next pack of smokes!! Just decide you are DONE.

Water is the easy part. To get a tobacco juice you’ll like I urge you to seek help. This forum is a great place too and there are some very knowledgeable people here when it comes to tobacco flavors. I’m NOT one of them.

Set a date… tell yourself over and over that you are not going to be a SLAVE anymore. No more money to Big Tobacco from this date (whatever it is), forward.

Set a date… tell yourself over and over that you are not going to be a SLAVE anymore.

Excellent! I have an app on my phone called Since I Qut. You punch in how many cigs you smoked per day, the cost for those cigs and your quit date. It will track it and give you a count of how many you avoided and the money you didn’t spend on them. May be motivational. I know for myself when I looked at it after 3 months it was hard to decide which I was most impressed with, the savings or how many I avoided. Of course now I don’t track this at all because I’m spending more than when I smoked, but early on things like this are helpful.

Set a date… tell yourself over and over that you are not going to be a SLAVE anymore.

Excellent time of year to make a New Years resolution. And I think you hit it on the head Alisa, nothing will make you stop other than you. Everything else is just an assist.

For several months vaped and smoked. Then one day did not enjoy a cig…it tasted nasty. Made the decision to lay them down. In the next month had several… all were nasty. Haven’t had any since. That was a yr ago. Keep working at it. I am thankful that the equipment has improved since I started. 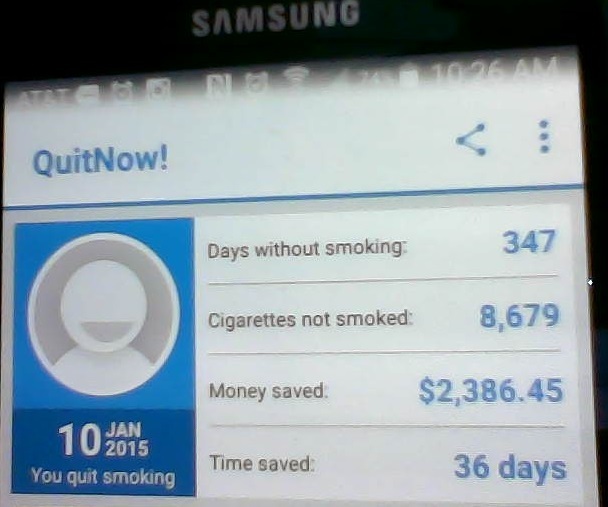