IDK about this Billow

Been using the billow v2 for the last couple of weeks and it leaks like a son of a bitch. Everything is as tight as it can get. Not sure what else to try.

Sorry to hear about your woes… I know it doesn’t help, but I’ve only just started using mine - wrapped a dual titanium coil, wicked it like I thought looked good (didn’t watch any videos), and it’s just performing beautifully… No leaks at all… Maybe you have a faulty unit? Do you know anyone nearby that has one that doesn’t leak?

I’ve never had a leaking issue with my Billow V2. Is it leaking from the air intake holes? If so, it could be a simple wicking issue.

I say simple, ha, sometimes getting the wicking correct on some attys is quite a challenge. Been there…no fun, when 5 ml of juice is all over the mod and table when you come back from checking the mailbox for vape mail!

Another thing is I don’t tighten my tank completely down flush onto the base.

I friend who has the same billow v2 as me, has been trying to wick his for the last few weeks and keeps coming back to me to do it for him. It either dry hits, spits back or leaks because he’s using either too much or too little wick.

When his was leaking like a SOB I noticed his chimney section over the coil build was loose.

I use around a 4-5mm cut strip of MUJI when I wick mine.

It could be that when you’re sliding your chimney on you are moving the wick positioned in the channel lip causing a straight shot for juice to travel up.

…and make sure there is a black O-ring still at the top of the chimney shroud around the wicked coils. That O-ring seals off juice from back flowing to the deck.

Thanks guys… I’m thinking its probably a wicking problem after reading your replies. I’m still a noob at it, so it would make the most sense. It seems like it’s coming out of the air intake holes, but i still notice a leak when they are closed. It’s so slow it’s hard to tell where its coming from.

Make sure your copper centre pin is tight too.

Like @Jimk has mentioned make sure all the o-rings are in place too.

Other than that it will most likely be a wicking issue.

If your wick isn’t situated quite right it can allow too much juice up the channel bi passing your cotton and feeding straight into the airflow for the coil.

With my wick I push a small amount of cotton against the lip on the airflow for the coil making sure not to hang any into the airflow.

Can you further explain where you put the cotton against the lip, or maybe put a pic up? I’m having trouble understanding exactly where it goes. thanks!

Here’s a couple of pics. 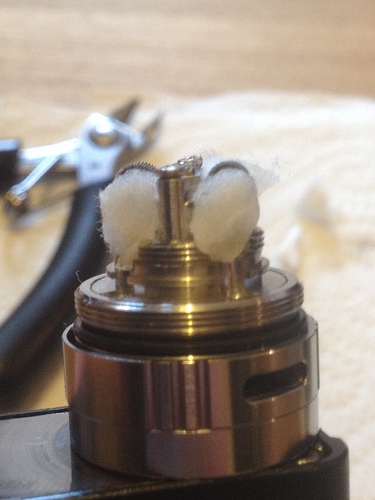 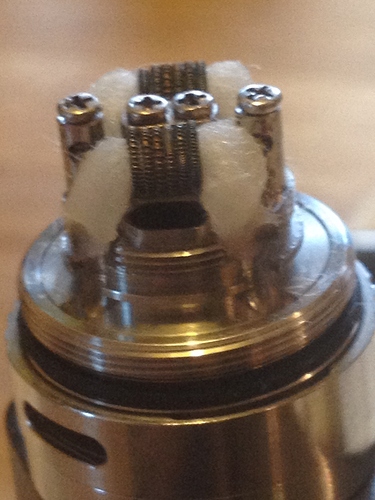 There’s a lip at the top of the juice channel at the start of the deck and there is also the raised lip of the airflow to the coil.

I push some cotton against the airflow lip and then the rest into the channel lip.

It does… thanks. I’m having a hell of a time with this thing. Either dry hits, leaking, or both. I’m gonna get something else that’s easier to work with if I cant get it wicked right in the next couple of days… Then come back to it once I have more experience I guess.

I understand your frustration.

My friend can’t wick his properly even if his life depended on it.

I’ve even cut cotton the right size for him ready to twist the end and feed it through and he still can’t get it.

Luckily for him I change builds roughly every 7 days in my billow so he has a new build that matches mine each time lol.

Next time I strip mine down and clean it I’ll try and do a full wicking tutorial with pics and post it on ELR showing how I push extra cotton against the airflow lip etc and how I cut/where I cut my cotton and how much etc.

are you stripping the papery coating off both sides of your cotton if you’re using sheets?

Are you per rolling your wick at all? Not just the end for feeding but the whole wick? I don’t. I leave it fluffy.

I’m just rolling the end of the wick, and I do remove the coating off the cotton. I’ve tried so little wicking to the point where it dry hits most of the time… just to see if it still leaks out of the intake holes and it does. I realize it’s my fault and it’s not a shitty tank,… It’s just starting to get on my nerves.

If anyone else is having trouble wicking the billow v2, here’s a pretty in depth how-to video:

Good call using the extra cotton… Just rewicked again with your method, and so far so good.

So it’s been 4 hours or so of pretty much straight vaping and not a drop has leaked. It feels strange holding this tank and it not being all wet. Also it’s nice not having to change my shirt. Yesterday I had to change my shirt 3 times because juice kept getting all over them.

It’s been about 24hours now how’s it going?

Going great actually. Had a little leak yesterday, but that was because the piece that goes right over the rba section got loose. I’ve been reading about other tanks with rba over the last few days and it looks like leaking is pretty common if they’re not wicked properly. Makes sense though if the cotton is hanging on to too much juice… it’s gotta go somewhere.