I have one of these and really like it so far. In fact it is the first mod that I have been able to use temp control successfully. My question is this. You can only use the IMC decks on this and I am enjoying the velocity style IMC-3 that it came with but I want to know is there an adapter to make the connection 510 so that I can put any tank or dripper I want on it? the connection is bigger than a 510… does anyone know?

dont think so thats the all in one type where u have seperate fill tank not convention, but perhaps theres a connector out there but then the atty would sit atop the whole mod ,not inside like it does now unless u cut the crap outta the top

Yea I know it wouldn’t be pretty, I don’t intend to destroy the mod I like it the way it is just was thinking if I could use other tanks on it at home lol no worries I have a couple other mods to play with and a sqonker on the way

Thanks for the reply

There is no adapter to use a regular rda or rta on the rdta box. Is the rdta box your only mod?

No sir. I still have an old itaste MVP pro I also have the sigelei fuchai… Ordered my first squonker which should should be arriving Saturday… Kanger dripbox 160 and a IPV 8 since I still had store credit to use with VAPENW… So I am pretty set on mods for a couple months lol Still want a few more though lol

No cutting needed, you can disassemble the tank and screw a 510 connector to their 510 “tube”

I should be clearer in my answers…

510 connectors have a M7x0.5mm thread and were adopted as the standard threading for battery and atomizer connectors from 2010 onwards.

Ah Ha!! There is an adapter lol thanks bro

You’ll need one with an adjustable / longer pin as the ones I have dont reach the contact, you could always tap it out to make it sit lower if you want… 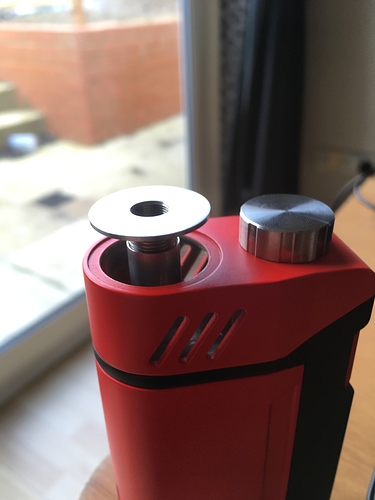 Failing that, if your feeling confident, remove their 510 and replace it with your own

Oh wow! I was told such a thing did not exist. I’m gonna have to pick that up.