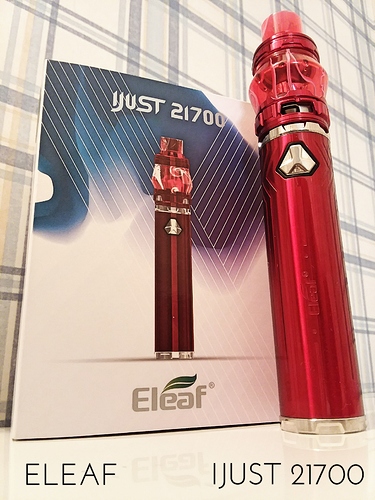 The iJust 21700 is the newest tube-style mod from Eleaf that boasts an 80W max output, as well as the ability to use an 18650 or 21700 battery. This mod is a really nice addition to the iJust line, as well the newest coil types for the Ello Duro. The iJust 21700 and Ello Duro were provided to me for the purpose of this review by Eleaf.

[TPD Version available with 2ml Glass, as well as locking top for atomizer ] 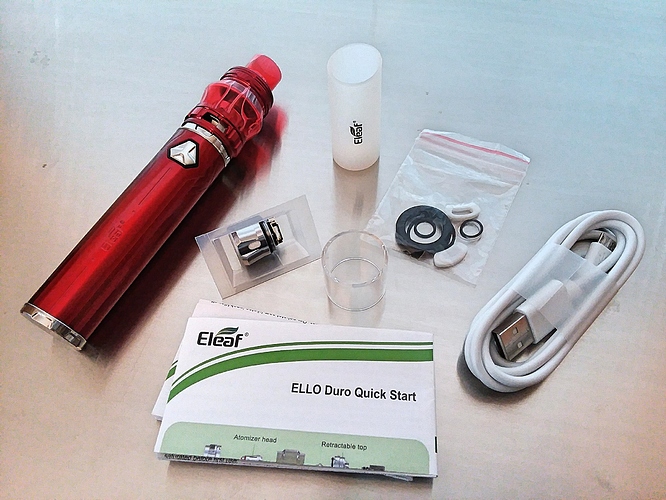 I want to jump straight into my favorite part about this mod first. It has to be the newest coils for the ELLO Duro, which are the HW-M2 and the HW-N2. They are close to the HW-M and HW-N, which stand for Multihole and Net Coils. The HW-M2 is a larger, multihole style coil with a bit more surface area than the N2. Both coils are Kanthal, and the M2 has a slightly slower ramp up, although both coils are really made for flavor. The main difference in these newer coils is the cylindrical airflow in the middle of each of the coil types. This cylinder has airflow holes that encompass the sides, and pull in flavor from the coils from all sides. While the newest coils have LPSC, which stands for Leakage Proof Self Cleaning, Leakage Proof being the most apparent. Where the cylinder sits, it simply cannot absorb and amass e-liquid to leak through the base and out of the inlets. I haven’t actually had an instance of leaking using the ELLO Duro, and as for Self Cleaning, the tiny holes on the underside of the coils do seem to help minimize any condensation that would normally happen near the airflow inlets. The coils are fantastic, and have to be the absolute best part of this kit so far. The flavor is immense, on both coil types. While the M2 has a sort of steady ramp up, the N2 has a very consistent hit, both being intensely flavorful. The cotton wicking in the new coils has a sort of honeycomb look to it, and sucks in e-liquid as fast as you can fill it. Priming the coils really didn’t require any wait time as they absorbed quickly. 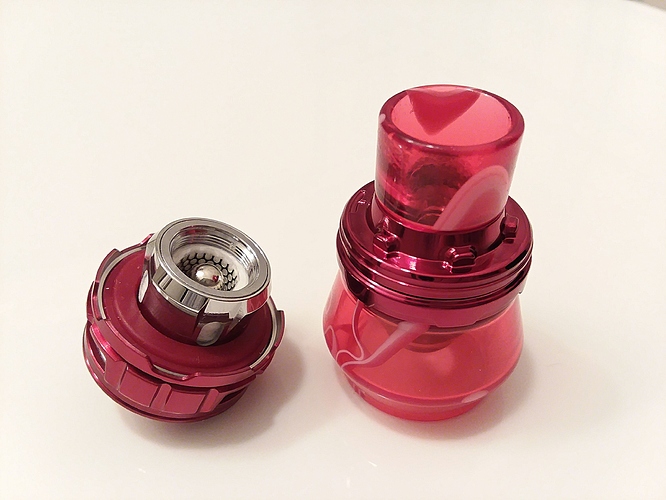 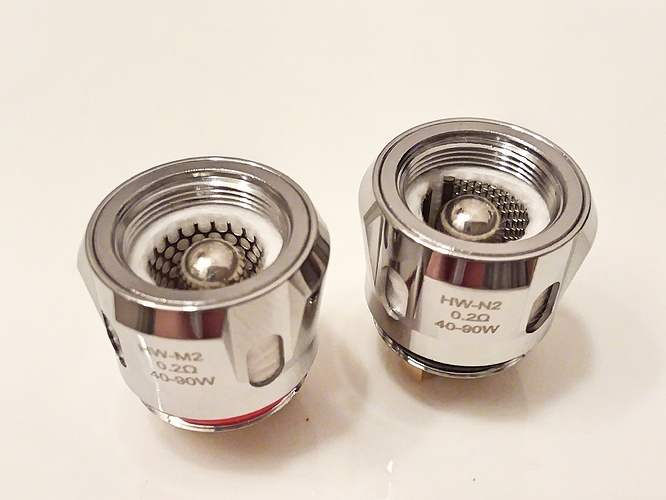 The ELLO Duro tank itself has a metallic finish with a 5.5ml Acrylic Tube, as well as a 4ml Standard Glass Tube. It is a simple slide-to-fill retractable top, while the child-lock version has a locking top that is opened with a 180 degree turn. The Duro has three kind of oddly shaped airflow inlets at the base. I say oddly because, well they are trapezoids. The tops are slightly shorter, while the bottom of the inlet is wider. The tank body itself is really well machined, no obvious flaws on the paint. The seals are sturdy, and both the slide-to-fill top as well as the airflow are both fluid to open and shut. The Duro has a standard (well, nowadays) 810 Drip tip, Acrylic to match the Tapered Tube. 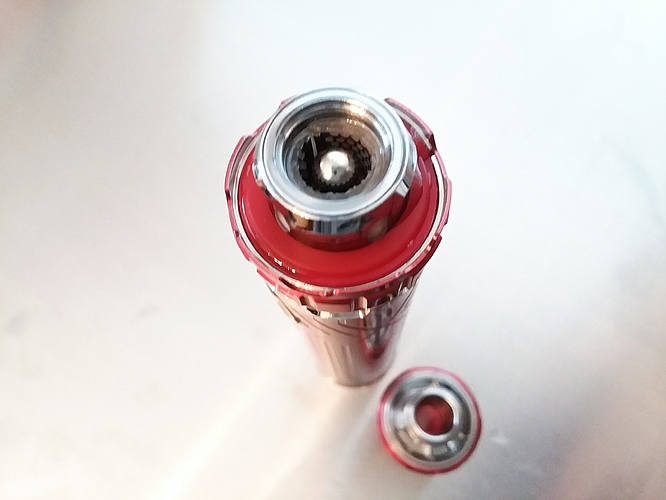 The body of the mod is a Zinc Alloy with a metallic style finish, and some simple engraved contrasting lines that encompass the body of the mod. This is where the trapezoid thing comes in. In keeping with the oddly shaped airflow inlets of the tank, both the top and base of the mod use these shapes as well in a pattern. It looks nice, although the corners on the top of mod (trapezoid corners) are a little jaggedly sharp. Granted they are tiny, and not likely to do any sort of substantial damage, just don’t go rubbing it up and down your legs (well that would be weird anyway, just don’t do it). Being Eleaf, I sort of expect those shiny metallic firing buttons, my first 30w Istick had one, still clicky as ever years later. I kind if wish I was feeling this button, especially with the LED that surrounds it, but the pentagonal shape is a little odd feeling. It does fit a finger really well, and it is an ergonomic shape, maybe I just don’t like pentagons. Both the 510 connection as well as the battery cap have been relatively smooth to adjust or unscrew. 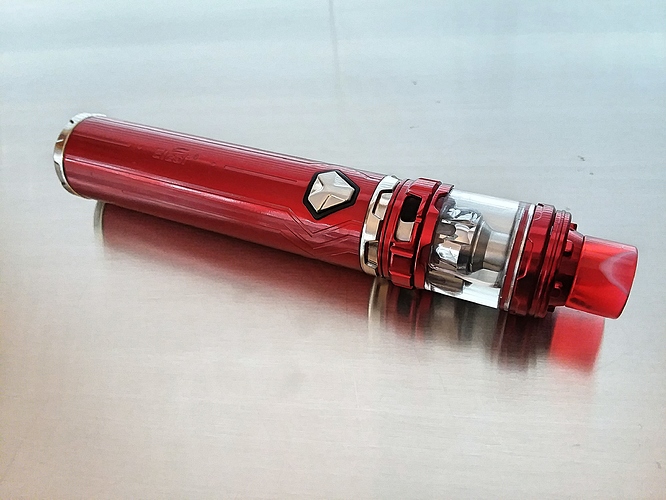 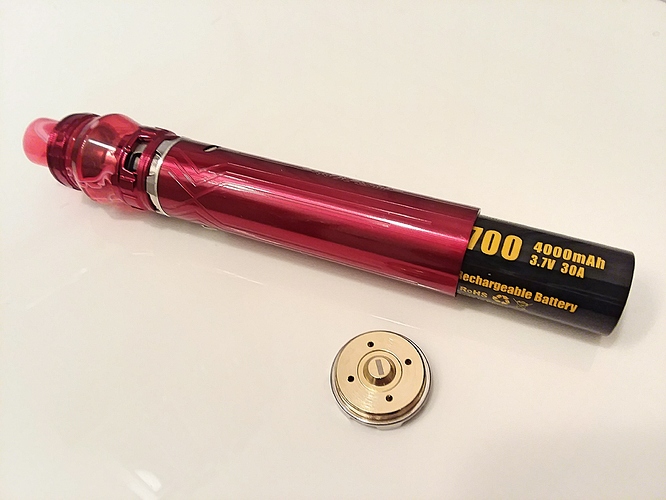 The mod itself is the standard (5) On/Off, and the indicator light can be seen around the firing button, as well as on the back of the mod into the charging port. Being that it can take a 21700 as well as an 18650 (using the included sleeve) your battery life can be greatly increased depending on the type used. Because the iJust 21700 is Direct Output, you will definitely notice the drop in performance as the battery dwindles. For some, that might be a con, but it all depends upon your usage. Even as the battery drops, the coils still perform well at 30-50 watts. 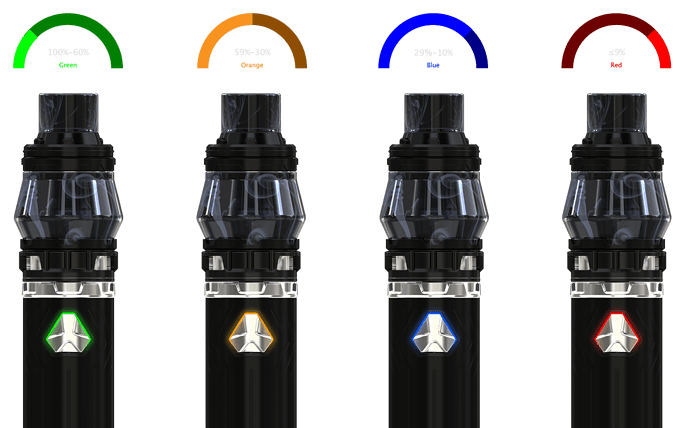 The battery indicator was somewhat hit and miss for me. On the charging port, the LED is pretty crisp and clear, but the placement of the LED in conjunction with the firing button is really very minute. In daylight, or outdoors it is scathingly hard to see, in fact you probably won’t see it. I say hit and miss because the battery level is supposed to go from Green>Orange>Blue>Red. Finally, one of the protections (Low Voltage) should kick in and flash, and no output is given. This did not really happen for me. I first noticed that after depleting the battery around, say halfway, the light remained Green. The battery was discharging perfectly fine, at a pretty constant and normal rate, only the indicator light wasn’t in line with the voltage of my battery. In fact, at around 3.3 Volts, the indicator changed from Green to Blue, but then to Green again. I had to keep taking my battery out to manually view the voltage of the battery. Eventually, I tried a separate battery that had been used for a while, and the Low Voltage protection did in fact work normally. The only real problem was simply the indicator light. In talking to other users, as well as reading others use of the mod, I’m convinced my issue was just a one-off, and a bad indicator light functionality as the rest of the mod functions worked perfectly.

I’ve had a ball using the iJust 21700 and ELLO Duro, the flavor is pretty monster in the newer HW-M2 and HW-N2 coils, and they certainly rate above average in terms of flavor output compared to other pre-made coils. The addition of a porous cotton and a well-made Kanthal coil are pretty nice considering other companies are trying to use different wicking types and materials. I don’t think I am a different materials kind of person. I stick to whatever I like, and tend to hold onto liking it as long as I can. I can honestly say that I am going to purchase more coils for this, probably the HW-M2 as the ramp up is slightly more what I am used to when using my own coils in my RDA’s. I wouldn’t quite compare this mod to a standard starter kit, not really. The option for a battery that can be swapped out for a 21700 in place of 18650 is something that really appeals because of the battery life. The ELLO Duro can be used atop another mod, and the coils both shine really well around 55-65 watts, for me this was the absolute prime wattage spot. 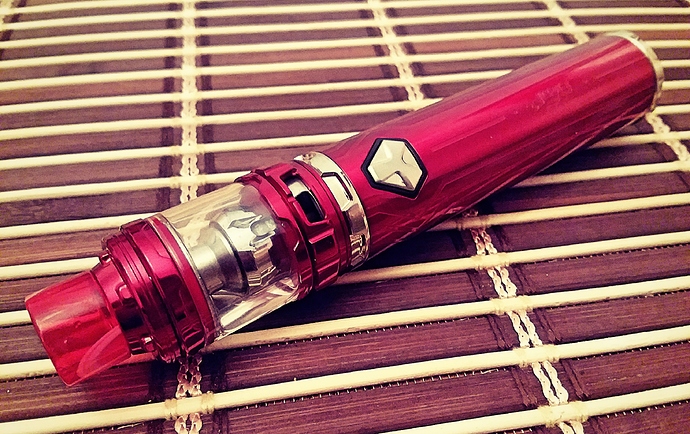 The colors available are:

That problem with battery protection is scary. Great review, @Silhouette . Not something I would buy though.

Such a great review as always. That’s a nice looking set up.

Thanks for the review. Nicely done.

Nice review @Silhouette thanks for going over it. I’ve always been a fan of tube style mods going all the way back to my ProVari and eVic Supreme. My wife has a V8 that she loves, humm, should I show her your review? I think I know what she’s gonna say.

Thank you for an excellent review. You covered all the bases! This looks like it could be a good replacement for my dying Smok Stick V8.

It’s a pretty decent tube-style mod and tank, and would easily replace a V8. I also wanted to add this, seeing as I’ve been using both coils for the past few weeks as well as using the tank for testing the new Flavorah flavors. This is the HW-N2 coil, still going strong and pretty darn clean (even used PUR Super Sweet in a few blends). This is what the N2 looks like today. 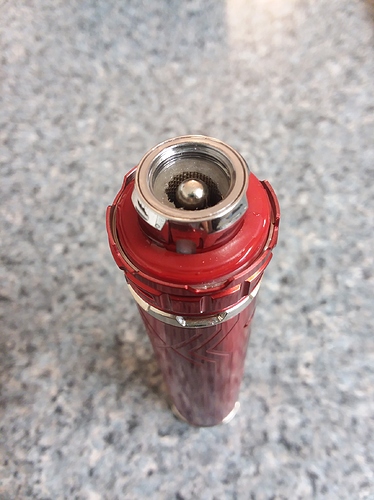 I really appreciate the feedback y’all.

Nice one @Silhouette, not for me but I’m sure it would please a lot of people.