I’m looking for a single coil RTA that doesn’t leak and has very good flavor. It must be top fill. It must hold at least 4 ml of juice. It must be single coil only. Thanks in advance for your suggestions.

iJoy EXO! Fantastic tank, comes with 2 decks, single and dual coil, 6ml and 2ml glass and extender, doesn’t leak if you wick it right but you might get some condensation dribble from the AFC every now and again.

Thank you so much!! I’ll look into that one.

Ammit 25 RTA should be a great single coil flavor RTA too.

Serpent Mini 25 is a great little single coil tank that also comes with a dual deck.

Yeah, or the Serpent SMM RTA is also a nice choice.

I tried the SMM and for me the air flow is a tad tight. Good tank if that is your style of vaping.

I already have the Ammit 25 and it leaks but it does have great flavor.

Do you fluff out your cotton and make sure you dont stuff too much cotton in there?

With quite a few RTAs too much cotton stuffed in can make it leak, i know it is a paradox.

Of the list you gave I already have several of them.

OBA engine Nano is fine. Use this for the work tank. Will never ever leak or have condensation

Never heard that before but will look into it.

It must hold at least 4 ml of juice.

I feel like I sound like a broken record here, but, have you tried the Theorem? Granted, it’s only 2.5ml, but I’ve had zero issues on any front. Great flavor (my most important), doesn’t leak (my second factor), easy to wick, easy to fill (I use glass droppers), easy to clean… And handles up to about 50w with no problem.

If you vape higher wattage, that’s about the only reason I wouldn’t recommend it. Well, that and you almost guaranteed need to buy a drip tip for it, because the one that comes with it sucks.

Good luck in your search though… Following with interest!

Have you tried wicking with hemp? My Merlin mini leaked like a sieve when I screwed the cap on after a fill using cotton wick. After I switched to hemp it has never leaked again. I think the reason why is that it is easier to pack more hemp into the juice wells than it is for cotton. Since hemp wicks faster than cotton, dry hits aren’t an issue with packing hemp either. 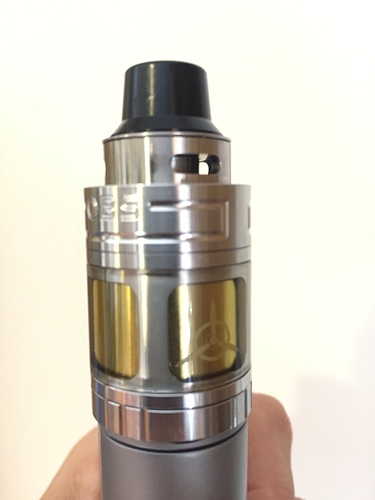 My on the go tank. I have never had a problem with it. Only other slight thing is to have enough cotton to fill the wicking holes snug. If it is to loose I have had the deck slightly flood when filling. Easy fix.

I wick with Rayon and I think I may have solved the leaking issue with my
Ammit 25. I’ll let you know if it works.

I have found wicking to be fickle. Everything has it own little trick. It took me a while to get my baby beast RBA section wicked correctly so it didn’t leak. I haven’t had it leak but once in months. I still don’t trust it enough to carry around on a busy day though.

How high do u run ur .18 coils I’m running the same thing but I get alot of spitback

well… this is a very generic question
though NONE tank leaks juice if you build it correctly… every single RTA has the potential to leak or give dryburns if you wick it with less or more cotton than it needs… the list in these products also is awesomely big… so giving some more info for what you need/want would be much better (what wires you want to use, if you are interested on DL or MTL Vaping etc)

for MTL i would strongly suggest Vandy Vapes Bersersker (2ml and goes up to 4.5ml),

Kangertech Toptank/Kangertech Subtank (they’re not RTA, they have an RBA that it’s single coil, though Kangertech protank 4 comes with a velocity rba but can fit also the rba of Subtank/Toptank (the Velocity can’t fit these two) so you can use it with the single RBA)

Now when it comes to DL…
Digiflavor Pharaoh RTA (goes like 7+ ml with the extension, without it it’s a lil more than 4)
Vandy Vapes Govad RTA (4ml)
GeekVape Ammit RTA (22mm) as far i remember it can hold 4ml, if not someone correct me please
Wotofo Serpent RTA (4ml, Single coil Deck)
OBS Engine Nano (the nano is single deck though i am not sure for it’s capacity)