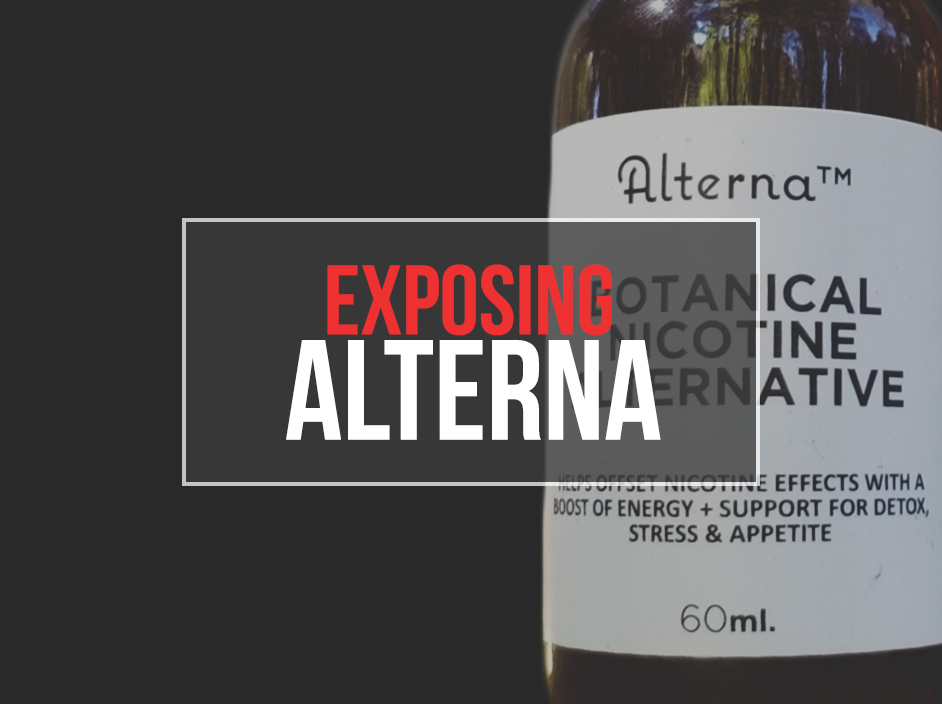 https://www.youtube.com/watch?v=E3XGAodqtOM&feature=youtu.beAlterna - tiveSo Clayton was so kind to review a product that was recently sent

St. John’s Wort interacts with a whole host of medications, some effects are not even known or documented seeing as its an herbal remedy and not an FDA product. I didn’t need to read any further than the ingredient list. Mixing St John’s Wort (messes with serotonin levels and interacts with medicines, including decreasing effects of narcotics) with a stimulant like Yerba Mate and inhaling it… well I sure as hell wouldn’t do it. There are also too many herbal extracts with different functions going on here, SSRI-like mood enhancer, stimulant, sedative (Kava and Valerian).

Maybe it could work for some people, but not this people. Not knocking a product, just too many uncertainties when it comes to a product like that (for me at least).

My wife and I take vitamin and mineral supplements daily and are firm believers in their benefits. We also drink distilled water exclusively and eat as clean and healthy non GMO foods as we are able. But our advice comes from a doctor and certified nutritionist and not some snake oil salesperson.
I watched the video in astonishment that anyone would even consider vaping a product with wholly unknown effects when vaped directly into one’s bloodstream. As pointed out in the video and articulated by @Silhouette even orally ingesting some of the substances can be very harmful.
There has been a ton of "recipes’ posted lately while 'hawking this product. Its not my call to say what is permitted and what is not. However, I think this thread and linked video are must see here on ELR. All we need is for someone to die from this absurd junk to put the screws on all of us.

I don’t want to bring in my past career paths, but one of them happened to be pharmacology, and I can tell you that for someone to use this, and not fully understand how it would interact with any medications they were taking would be a disaster.
Ever used an SSRI type drug long term? You would hate the brain zaps that occur after stopping. They start at the base of skull, and work their way upward.

You don’t have to be versed in Pharmacopeia to know that this, isn’t a great idea. I agree, we should have alternatives, but those alternatives need to come from people with a Doctorate, in a sterile environment. Or at least someone with lab time, and a chemistry background, and it needs to be tested by independent labs to ensure its efficacy and safety first. I agree @mrpipes. Not to mention it has eerily similar ingredients to an herbal sexual stamina blend, that would only serve to also make you drowsy at the same time with Kava and Valerian.

Thank you. While I don’t have a degree in any medical related field, mine comes from the University of Hard Knocks. For a very long time I have been a vocal opponent of the SSRI and all other psychotropic drugs. If there is any subject that will get me up on a soapbox, this is it. The percentage of our population that have had these drugs prescribed is astronomical…and climbing.

The “Hard Knock” came when I had to bury my 45 year old only son. I, along with the coroner, attribute his death to an SSRI. During our last conversation I urged him to use extreme caution and at least “read the label.” After a weekend outing with his daughters with no outward reason known or shown, he ended his life. There are incalculable numbers of people that have had the same experience yet this crap continues. And as you said, the side effects from withdrawal are monstrous. But enough and thank you for responding and stating what are surely unquestionable truths.

For anyone who might like to read about what is being discussed I highly recommend the followings books by Dr. Peter R. Breggin MD: Psychiatric Drug Withdrawal: A Guide for Prescribers, Therapists, Patients and their Families…Medication Madness: The Role of Psychiatric Drugs in Cases of Violence, Suicide, and Crime…Talking Back to Prozac: What Doctors Won’t Tell You About Prozac and the Newer Antidepressants…and there are many others.

Every 2 weeks for 3 years, a different one to try… Never felt so shit in my life, would rather just have all the paranoia and psychotic episodes than feel like that.

To name a few…

Just depends on the person and the disorder (and the doctor of course). I was on an antidepressant for about a year and it helped tremendously. I took a test called GeneSight first. It helps determine what drugs your system will metabolize the best.

Wait, wait. I don’t quite mean people shouldn’t take antidepressants, if it benefits someone, then all the more power to the person. I would never say don’t take medication prescribed by an MD as that would be considered medical advice, and we can’t go there. We shouldn’t go there. What I am saying is that St John’s Wort can cause the same withdrawal symptoms as a prescription SSRI, and who knows how inhaling could even serve to amplify its effect in the body. Using an alternative like this could cause those withdrawal symptoms if someone were to use this say beyond 30-40 days and decide to stop, or go back to nicotine.

Everything said is in the context of watching the video where Clayton aka Steamroom points to interactions and side effects of combining Alterna with whatever SSRI he is taking. The video covers other ground and also warnings of Flu like symptoms from combining nicotine with Alterna along with many other things. Wayne Walker has followed up on the video with one of his own and also a well written article. I won’t link to it here because some of it may be behind his members only paywall. (I am a DIY member)
I was not intending to hijack your thread. I am a firm believer in alternatives but don’t think that this even remotely resembles anything of the sort with promises of mood enhancement ,energy boost etc.

No worries. I don’t consider the thread hijacked. Everything posted so far has been related in my opinion.

What baffles me about Alterna is how the developers consider it safe when lots of people like me vape pretty much all day. Anything someone can take for their well being like st. john’s wort, kava, etc… needs to be metered. There’s no way to know how much you’re putting in your system, so at some point I would think the average person is going to see negative effects.

I admit that the older I get the more cynical I become and I’m pretty old LOL. So having said that ,when you want to find the truth about anything, follow the money. Clayton and Wayne both point to how defensive the company owner became when questioned. No rational basis IMHO.
And I believe you are correct, there appears to be no way to meter the “dosage” which should send up red flags all by itself. If it works why not orally ingest it and vape 0 nic?

Same here. Which is why I have so little faith in doctors and government agencies.

Right. This snake oil can MAYBE fly under the radar but we have constant nonsense about vaping minuscule amounts of nicotine which is the equivalent of eating an avocado or a few tomatoes.
Apparently Clayton called FDA to inquire about Alterna. I have to question the wisdom of this. We’re DIY and my opinion is that we can police ourselves by simply doing what we are doing here…spreading the word. If we don’t buy it it won’t last long.

If it works why not orally ingest it

I think you hit the nail on the head here. IF these are a true replacements for nicotine, or a way to curtail the addiction to it… why… in all this time, haven’t they used it for just that… nicotine replacement/therapy.

I think you hit the nail on the head here.

IF these are a true replacement for nicotine or a way to curtail the addiction to it, why in all this time, haven’t they used it for just that… nicotine replacement/therapy.

It’s also an indicator in my opinion, that they feel the need to “attach” their product to a popular (and in some views: trendy) “strategy” such as vaping.

Far easier to “ride the wave” of vaping, than try and get noticed on “merit” among the sea of trash that doesn’t work in health food/vitamin stores I bet!

I shall in the future refer to any vape with that ingredient in it as #snakeoilvape
There doing the same thing as a snake oil salesmen in the 1800’s.
Ill stick with my nic thank u very much.

Plus in that video it looks like a demogorgon is starting to grow in the juice he made… that can’t be good.

That could be intentional (depending on the marketing dept spin…), you know…built in tank/coil cleaning system!! Like a sucker-fish (algae eater) is to an aquarium. Yeah. That’s the ticket.