INW cactus as a main flavor

I was cruising through the recipe site for some new recipes to make and I found one that had cactus as the main flavor (3%…!) which intrigued me. But 3% scared me a little, too. So far I’ve used cactus to make my mixes juicier tasting, but never enough to where it stood out as it’its own flavor. Usually I’m using it around .25-.5%. What’s the highest you’ve ever used cactus successfully? Would it be insane to go all the way to 3%?

I was only thinking this yesterday! I was mixing up some Paradise Lost, which i do use Cactus in. And in that mix it really pops, at just 0.5%, but I love the flavor it adds, plus that juiciness. And thought about doing a mix with it as the main flavor. I already have it semi-created, and have Cactus at 2%, reckon that’ll be strong enough as I’m adding other complimentary notes into the mix, and it’ll probably end up a 9% total. But I think as a solo flavor, 3% would be fine.

Just to clarify, the cactus would be just one of several flavors in a mix, but would be the main flavor among them. Here’s what I have for reference. I adapted it a little bit from the original recipe that I found. 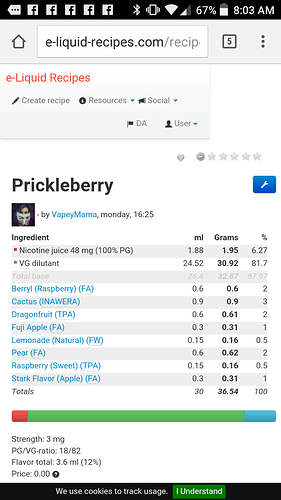 Mix up a small amount to test maybe. I’m lazy about doing that, when I feel a mix is looking good I hit 50ml right away, worst case, it’s not great

Yeah, I think I’ll do that. I have a couple empty 10ml bottles that I could whip a couple samples up in. I might try one with 2% and one with 3%.

Lol! Have you used cactus as a main flavor?

I have over-used cactus in recipes, yes. The flavor of drano and peroxide come to mind. Be careful, thats powerful stuff. I use a few drops in 120ml and it’s a nice little zing but anything beyond that…bleck!

In a mix 1% is probably plenty

there is a juice out there that uses Cactus as the main profile, can’t think of the name, not the G2 one as that has other fruits in the mix. But I wonder on the other one what % they use

Gross! I definitely want to experiment with using it as an actual flavor rather than just as an additive, but I have no desire to vape draino.

You will probably never do it again but I encourage you to try. It’s kind of like smoking weed, everyone has to try for themselves.

Let me know how it goes… lol. If you like it at that strength I’m going to have to consider the fact the Human Genome may be getting into the super human range.

I just mixed up my Rocket Pops V2. Its basically 10% Red white and blue pops… and 2% Kactus. Also 1% Super Sweet. And a little Koolada… ill release the recipe when its delicious. (if) lmao

2% Cactus may kill you. But again, like Marijuana, I think we all have to try it once.

Don’t worry, you will have a lot left over to put .20% in your fruity vapes to give them a zing. (provided you can ever vape Cactus again)

I never got brave enough to try it higher than .5%…

That’s because you are the VapeyMama who gives mixing wisdom to the new children.

Really? If thats the case, ill dump it. I read that 2% will make things juicy. lol oh well, down to .25 we go. Thanks man

Don’t dump it, Add a lot of VG and bring your other flavors up until you get that Cactus at .30%.

I dumped it. Thanks for the tips… fuck. I need VG now