Is it petty to be complaining to the local news about this?

This story didn’t just happen to appear; the couple called the news to try to get sympathy. What do you think about them and the owner of the venue?

I perform at wedding venues a LOT. A place like this, with 2 years of solid weekend bookings isn’t going to go bankrupt any time soon, unless the epedimic lasts a whole lot longer than predicted.
I think they’re ok for putting this out in local news. Their frustration being met with no compromise, other than the unbelievable options they’re giving, like a teenager who can find a logical way to be right, even when they’re wrong, would fall flat in a Yelp review.

I’ve been playing weddings going on 4 years steadily. You know how many I’ve played on a Mon-Thurs? Big fat zerO! It doesn’t happen. It should be partially refunded at worst, imho.

My niece had to cancel their wedding as well, and I get that it’s very upsetting to plan the wedding of your dreams and have to cancel, but it is what it is right now. I haven’t read the article but well, as much as this is the most special day of some people’s lives, it’s better to be alive and not infecting everyone around you.

Everyone in the world which is affected by the virus, will loose somthing. Some more then other, but in the last end if we survive… We win, and most things we can do or plan again.
So with all respect, take a biscuit.

There is mention of a contract in the article. If one was drawn up that alone should guarantee at least some, if not all of a refund. Groom states they waited 14 months. If payment was made at the beginning that means the venue’s owner was probably collecting 14 months worth of interest to boot! Neither side really is at fault, but this is one reason why contracts were invented. It’s not petty at all and I hope a favorable decision is made for the couple.

These are the enduring existential questions from the (national) news info-tainment industrial complex:

“Fox News Host Ainsley Earhardt: People Under Lockdown ‘Can’t Get Their Nails Done’ - As the coronavirus claims more lives, Earhardt says her friends are concerned about the state of their hair and their manicure”

So basically these women are afraid to be seen as they truly are. Unbelievable!
This easily takes the Petty Award.

Well, being males, we can perhaps (only partially) appreciate certain “womens’ blues” ? (IMO), the (personally oriented) statement (made in the context of alleged, or at least “faux”, “journalism”) shows how readily/totally “divorced” made-to-order info-tainment has become from substance - as well as the penchant of “consumers” to reward persons and advertisers who appeal dominantly to their comfort with pornographically-coiffured “reporters” (and “politicians”). Our collective attention-spans are short enough to require “eye candy” to keep us from dozing off, or seeking new novelties. All about hormones, money, power, privilege. Who are the brain police ? ~53 years following, our species of critter is none the wiser. 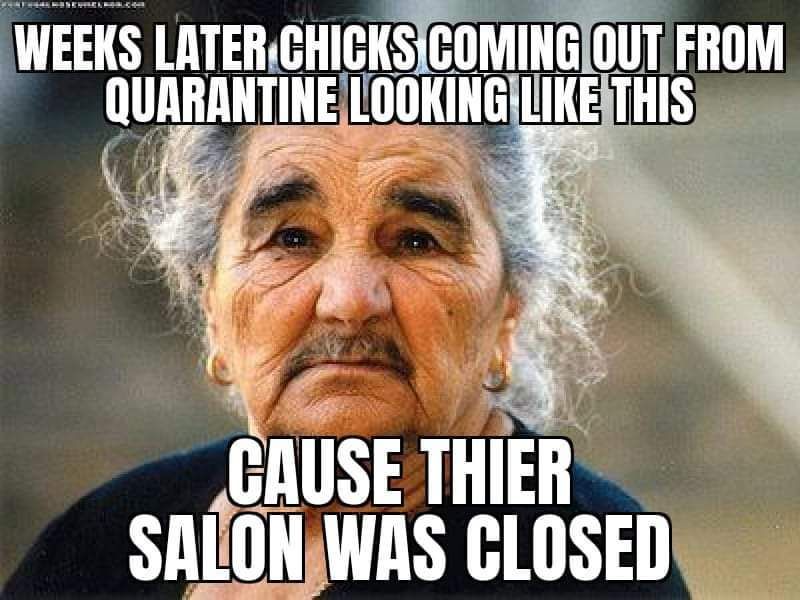 Perhaps women don’t really like our hairy legs, either ? …

I think I’m gonna complain to the local news about people with kids turning up in our dog park.
Yesterday there was a woman with a kid who was running around the field screaming and hiding, acting like a rabbit.
I told the woman to tell her kid to stop running.

She told me he was afraid of dogs

So I asked her what she was doing in the dog park when there’s a park not 5 minutes down the road where dogs are not allowed off the leash.

I was told that in this time we shouldn’t tell each other what to do or where to go.

I told her again that it is a dog field and she then told me that her son was a dog too.
With reasoning like that I can take my dog to the playground, any complaints from parents and I just tell them that she’s a kid.

People with kids are welcome in every park, dogs are not.
There are playgrounds everywhere that they can go to and still I was told by other dog owners that I was being inconsiderate telling this woman off.

My dog is young, enthusiastic and doesn’t know her own strength, any accident involving a child will most likely end up with her being punished (read put down) for it, not the stupid woman with her child.

Am I the petty one in this story?

I just snorted my coffee… thanks!

I just snorted my coffee

Are they all out of cocaine my dear?

You are doing it again haha!!

Stupid can be fixed, it’s the one’s you just can not reach that remains the biggest issue

You are doing it again haha!!

There you go, I even manage a silver lining when complaining

Stories like yours always remind me that idiocy knows no borders.

Two things are infinite, as far as we know – the universe and human stupidity.

We now know that this statement is not quite correct. Einstein proved that the universe is limited.

And for anyone that doubts this just go over to the recipe side!

Consider this. In every species on the planet, the members of a species that are stupid, relative to the rest of their species, will typically not make it to adulthood or mature. Normally, they end up being eaten. A zebra that is dumber than the rest of the herd will wander off by himself and end up being Sunday dinner for a nearby pride of lions.

The human race, on the other hand, is the only species on the planet that not only allows their stupid to reach adulthood but encourages them to reproduce. That’s some fucked up shit right there.