It's not Rocket Science

…but I like to drink Apple Juice or Cider everyday at work. I was running low on my Apple drink, so I filled up the rest of my bottle with a Capri Sun Berry. The two actually tasted good together. So I decided I will try making and Apple-Berry mix E-juice and see how it goes. I’m sure many of you have had similar experiences to influence your mixing.

That is precisely how I conjure recipes.
From drinks, pastries, desserts, foods, etc.

Today I’m vaping @VapeyMama’s … …after a two week steep, and its delicious! I was concerned it might be a bit too apple heavy (not a massive apple fan), but the balance of apple to berries is perfect (for my tastes)! It’s adapted from @mikelej14’s

I gotta second @Lolly. This mix has made it into my regular rotation. Give it sometime for the Fuji to calm down and it is very good!

VapeyMama’s version is listed as “Private”

From what I’m seeing in the “Preview” window, it looks as if she replaced the CAP creams with FA Whipped Cream, yes? Sounds really good right about now, seeing as the weather is warming up! Bring on the fruits!

Ever use this site? I got it from a member here…

Speaking of fruits…I’ve been looking for a peach nectar. I love Adore’s Peach Nectar and hoping I could make my own.

No, but I have the book by Kris (it was a gift some years back).
It is a computer program index format, but I have not done more than flip through it.

I think I can get a screen shot or snip-it for a sample, let me look… 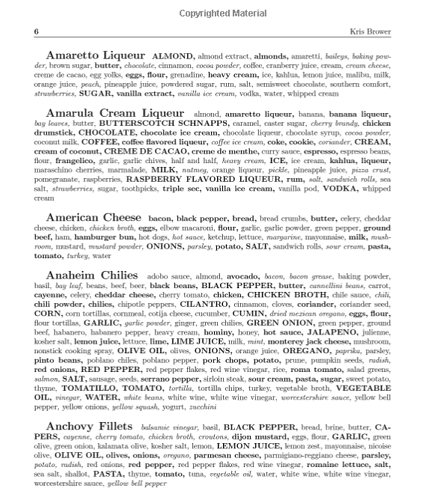 How do you use it?

Thanks @ozo,
Now I finally know what goes well with my “Anchovy Fillet” vape …

To conjure a recipe…
You say you want Peach Nectar something.
Think of peach drinks you like- Peach and Mango, maybe a little Grenadine, a splash of Orange,
and this is an excellent use for a little Pear, or Cactus, some stevia with ACV and lime juice.
Some Golden Eye…I keep it mixed as a stand-alone, in a Provari, and use it all the time, especially as a palate cleanser.

Maybe a Peach Colada- Peach, or two Peaches, Pineapple (some are nasty, like gasoline), Coconut
or Coconut Extra, Sweet Cream or Fresh Cream, some Meringue, a touch of Vanillin, some stevia stone, some Rum, a splash of Cherry, even Grenadine, or just a little Pomegranate…maybe a little Banana,
Golden Eye, Dragonfruit, Paradiso,…Honeydew Melon, Melon Canteloupe,…
Maybe a Peach Sangria ?

Or maybe a dessert like Peach Cobbler- Peach, or two different Peaches, some Brown Sugar, touch of Cinnamon, Pie Crust [maybe even Cookie, or Danish Swirl ?], Vanilla Bean Ice Cream-or Gelato- Vanilla Swirl or Vanillin, Meringue, Marshmallow, Golden Butter, Horchata Smooth, it just depends whether you like your cobbler with ice cream or cool whip or just plain. Some stevia stone of course. Danish Swirl if you are using Cinnamon.

And the beat goes on…

Gonna mix this up, soon as I get some Berryl! All I’ve got on hand is Raspberry(INW) currently…

I just want some peach nectar. But since you wrote a recipe manual for me I bookmarked it for future reference. You sure aren’t at a loss for ideas

This is a good peach base. Im sure there is stuff to sub (so you dont have to buy flavors)

If you make it, please rate it