More ramblings from me. @Vaptio_official sent me the N1 Pro Lite Spaceship Kit thing, this, a C-Flat, and the Turbo-L something or other. I’m working my way through the reviews in order of: “I like this a bunches” to “I love (and kind of sometimes hate) this” to “I used this for five minutes and then gave it to my mom” and finally “I haven’t even washed this yet…” No idea when that last one will happen.

Without further ado, the C-II, which you can look at here and read @mjag’s likely much more technical and thorough review here. (Sorry, mjag, I glanced through but haven’t actually read your review, yet. I will go back and read it now that I’ve had one; it looks like we had similar reactions.)

When I first got the box from Vaptio I was pretty sure this thing was gonna be a one and done kinda deal. It looked like another AIO device that would be novel for a minute and then get passed on to someone. To put it mildly, I did NOT have high hopes here.

I am a little shocked by how many times I have reached for it in lieu of one of my precious, beloved VTC Minis. I had every intention of giving this to my mother in hopes she’d trade me BACK the VTC Mini and Crown I gave her the last time I saw her. Alas, when I took it up with me for Thanksgiving I had to tell her, “I was gonna give you this, but I kinda love it and can’t now.” It’s okay, though. I gave her the JustFog thing, the Vaptio C-Flat (review to come, I’m sure you’re all thrilled), and the five mostly full bottles of VGod juice I had. And I let her keep the Mini. She was very happy, and those two devices are more her style anyway. That being said, I’m tempted to buy her one of these or find something along these lines for her for Christmas.

I have a love-hate relationship with this thing. I keep coming back to it because the truth is I love it more than I hate it, and I’ll miss it when it inevitably dies, as that’s what built-in battery things do. At least the tank is separate and I’ll only have to replace the battery. Which I might do anyway, since it’d be nice to have a spare. 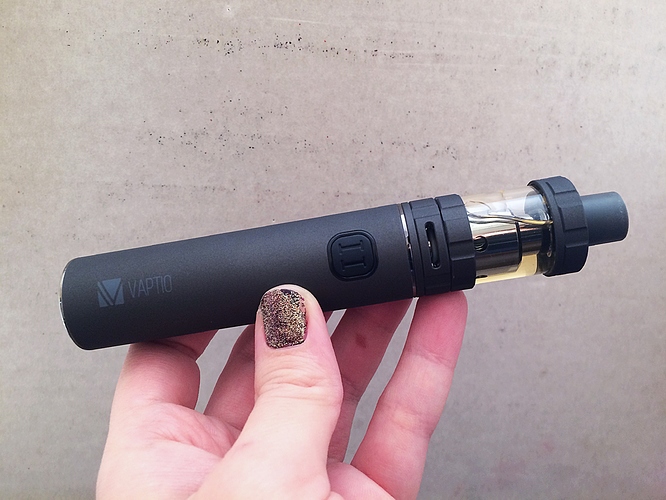 It’s really nice. I like the way it looks and I love the rubbery kind of finish it has. I’ve been taking it to school and, like I said, I took it with me out of town and used it almost exclusively for the three days I was gone. So far, it’s stood the test of time and the finish hasn’t started to come off anywhere. I think what I like most is the simplicity of it. Five clicks on, Five clicks off. I like the heft of it—it reminds me of pen mods but with more oomph. It produces surprisingly good flavor and vapor. I wasn’t expecting that at all.

The drip tip isn’t really replaceable. The rubbery-coated-feeling thing comes off, but there’s a metal protrusion that it fits over that is built in. I suppose you might be able to find something else that would fit over top of it. The knurling and the finish on the top edge means it’s easy to unscrew but doesn’t hurt my hand when I open it. I appreciate that. The air flow closes when you open the top to fill it up. Like the Frogman, it also had a stupid silicone dental dam piece of fluff that I removed. I’ve filled it with and without the AFC closed and the only time I had a problem was toward the end of my trip. The coil was starting to reach the end of its life and (as I’ve noticed with other prebuilt coils) it started to get a little drippy from the air flow holes when the battery power was low. The button is great with a lovely glow. I’m not sure what else to say about that so here’s a photo… 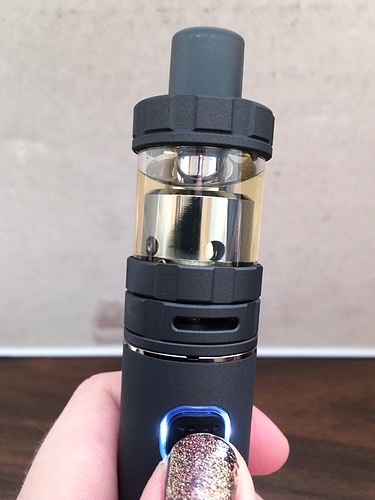 The first coil I tried was the one that screws in. I think it was the 129A, but they don’t put labels on the coils that I can find. It was great pretty much from the get go. A little metallic tasting at first, but that went away pretty quickly. It lasted at least a week, maybe two? I don’t know, things started to run together during the whole month of November for me.

The coil I have in there now is a press fit (is that the right term?)—the 180A, I think. While the flavor is okay, it gurgles like a teething 6 month old. It doesn’t spit or leak, it just feels like I’m trying to suck up the last little bit of a milkshake through a too-small straw. It’s gotten a little better after breaking in, but it’s still pretty annoying. I miss the other coil.

Speaking of, I have some coils coming from Fasttech that look like they might fit. If so, it’d put this thing in the “classic” category and would mean that it’d take things like the Aspire Atlantis or Triton coils. That’d be cool; choice is nice. I’ll report back if the box ever makes it here from China…

I definitely DON’T get a full day out of it. I usually wind up having to charge it by mid afternoon if I’ve used it exclusively for most of the day. It has passthrough mode, and I sometimes use it when I’m in bed. I’m not sure how I feel about that, though. I’ve never really trusted passthrough. I always kind of have this nagging in the back of my mind that the thing is gonna electrocute me or something. There doesn’t seem to be much drop off in performance when the battery dies as long as the coil is fresh. 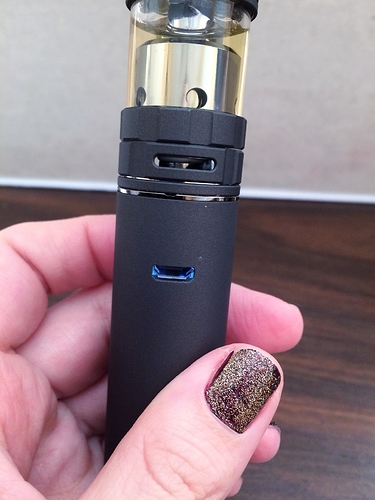 It’s definitely on the more restricted side, but not annoyingly so. I can still DTL it pretty easily. If you’re used to super open airflow, this isn’t the tank for you. If you don’t mind things on the “snug” side of open, then it will be right up your alley. The AFC was dang near impossible to turn at first, but when I took it apart to change the coil I figured out the AFC came off. I guess it got a little juice in there or something, cuz now it’s perfect—opens and closes easily, but still stays where you put it. And I like that the AFC comes off because it makes cleaning condensation off really easy. It does get some condensation around the AFC but not enough that I’ve ever seen it seep or drip, aside from when the coil was dying.

I have one big con, and it’s about the battery. I pick it up to vape, press the button, inhale, and nothing happens. This auto shut-off is the most annoying thing I have had to deal with in vape life since I graduated from an eGo spinner and Protank 2 to mods and sub-ohm tanks. It feels like the time till shut off is totally arbitrary or based on the remaining power or something. The marketing mumbo jumbo says it’s supposed to prevent auto-firing in your pocket, which is admirable I guess, but I wish there was some way to turn it off. I’ve been vaping for 8 years…I know to lock my stuff before I put it in my purse or pocket; I don’t need someone to do it for me. It irks me to NO END.

Pocketable and portable
Great feel - great finish and a good weight
Simple operation and easy filling
Good flavor and vapor
Passthrough charging (Is this a pro? I’m not sure.)
Not actually an AIO so you can swap out batteries

Battery life - while good for what it is, it still doesn’t last me all day
One coil was great, one sucks (or slurps I should say)
Airflow is a little restricted
Built in battery things are kinda meh for me now
STUPID AUTO SHUT OFF…I HATE YOU SO MUCH (but I still love this thing…)

Thanks for reading. Now, pat yourself on the back for going through this for me, cuz that makes you a nice person.

your reviews crack me up , they are informative and simple , i love that you dont come off as a " reviewer"
its refreshing to read and funny as hell id have to give you the funniest reviewer of the year award if it existed

funniest reviewer of the year award

I think that should go to a much more deserving reviewer. I’m not even sure I’d call what I do a review.

I am glad the haphazard stream of consciousness that is my thoughts put a smile on someone’s face! I have fulfilled my duty.

Another fine job mother! …I don’t think you hate doing these as much as you say you do

A friend ordered one of these for me, I wanted something small for on the go. Glad you liked it, but yes auto shut off will be a pain in the ass.

@JoJo I was wondering what wattage you used it at. I usually vape around 60w so I’m wondering if that will further decrease battery life compared to yours
Great review ty for this

Great review, thanks AT

Thanks @Steampugs. You’re right. I don’t hate writing these. It’s the posting/sharing thing I’m not crazy about. But, what’s the point in writing a review if I’m not gonna share it, right? LOL. I love writing, but other than for school and casual conversation, I don’t share what I write much.

@Lexie3 I haven’t found any way to change the wattage.

I think it does it for you “automatically” as the power left in the battery drains, which is part of their schtick—it’s “smart” vaping.

Almost like a mech mod, but not. Part of me kinda wants that so that I don’t have to worry about dead batteries, but the other part of me feels like that’d take away from the simplicity, which is something I love about it.

A final note about the auto shut-off. I put forward that this feature actually makes this thing MORE dangerous than if it didn’t have it. I have gotten kinda used to it and put the thing in the pocket of my hoodie with my phone and it was auto-firing because the auto shut-off hadn’t kicked in yet. Fortunately the gurgle was loud enough that I could hear it.

I think having this feature leads to complacency and it genuinely makes no sense to me why you would want it. Unless you’re picking it up after letting it sit for a long time, chances are you’ve vaped it recently enough that it’s still “active” when you put it in your pocket. This is the one thing that would make me hesitate to recommend it to a new vaper.

It’s the posting/sharing thing I’m not crazy about. But, what’s the point in writing a review if I’m not gonna share it,

You’re actually bang on there, I LOVE writing, but I got really disheartened early on when people gave me grief for my particular style albeit they were few and far between, but then I realised…well…I’m not telling people to read it…and if they don’t like it…then don’t read it?..and if you read it and then tell me you don’t like it…well…that just makes you a bit mean and the only person they are pleasing is themselves by putting you down…and normal…nice people don’t do that…so you post away Jojo, you’re a very talented writer and you should share your stuff for the people that will appreciate it

That’s what SHE said…