When healthcabin asked me if I wanted to review the Vapefly Pixie I said sure, why not.
Between saying yes and receiving the package something happened.

I don’t know if it is because winter is coming

Or if this thing is zapping all my energy 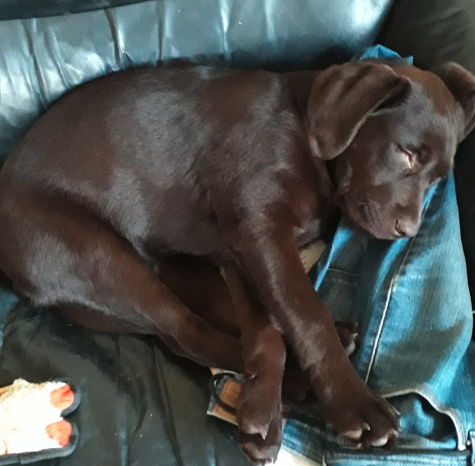 It could be the stomach bug I ended up with

Or it could be a combination of all of the above but I felt like shit.

I just couldn’t get a move on. It took me three days just to unwrap and open the box.

So let me not dally any longer than I already did and present you with the Vapefly Pixie.
My review will be my opinion only and will not be coloured by the fact that it was sent to me for review and as per usual I will start with the box. 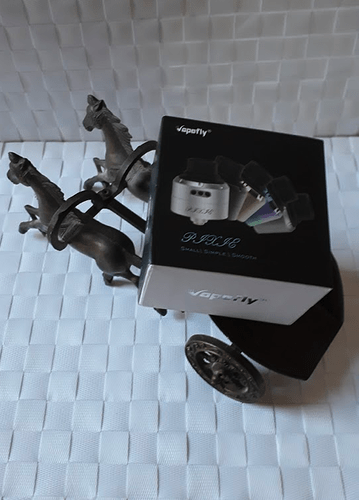 Under the sleeve you will find a white box with Vapefly in golden letters that I didn’t take a picture of because I couldn’t be arsed.

The most important thing about the box as far as I’m concerned is that it has cutouts, yeah.
The inside of the box is what always interests me the most and here it is 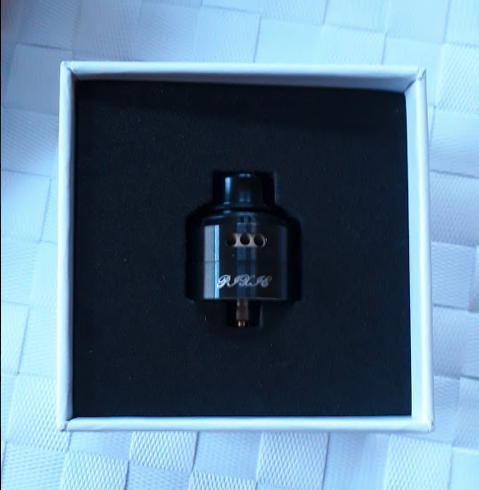 It is a tiny little thing and of course it comes with a goody bag, two goodies bags in fact. 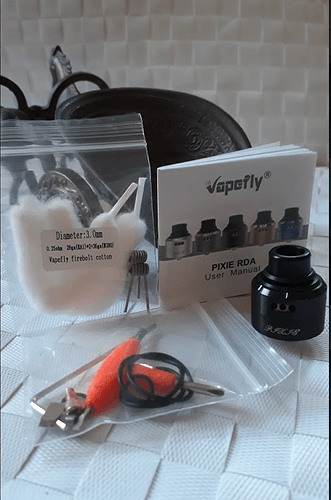 The Pixie comes in 5 different colours

Let me bore you with the specs

There, there, it wasn’t that bad

Oh, and by the way, the specs that I copied and pasted say that you get 1 pc of cotton when you can clearly see there are two.

When you disassemble the RDA you have this

For some reason I thought the bottom of the middle cap stayed on the base.
I don’t know where I got this ridiculous idea from, but I did.

I tried pulling and unscrewing but the thing wouldn’t move. I ended up sending an SOS to a fellow vaper who told me to screw it in a mod and pull.

Talking about dumbass, when you look at this picture…

you can see that you can use the slits to perfectly place the coil.
Naturally this dumbass overlooked that when building a coil.

Make sure to put in the 510 pin you want to use before building the coil since one of the posts is connected to the pin and will come loose when you change it and screw up your coil.

The notches in the middle cap will lock into the slits on the base to prevent it from moving out of position. 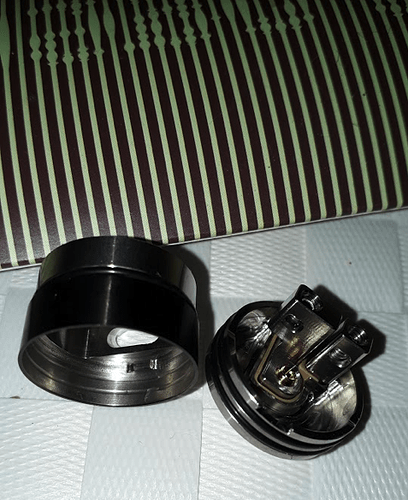 This will insure the airflow hits the coil head on. Unfortunately this is only true when you have the airflow wide open.

Wide open it is certainly not as airy as a lot of dual coil RDA’s but still too airy for me and when you close it off to get a more restricted vape, the airflow doesn’t really hit the coil head on but at a side angle.

Taking that into consideration, it would have been nice to be able to move the middle cap to get the airflow a bit more centered. 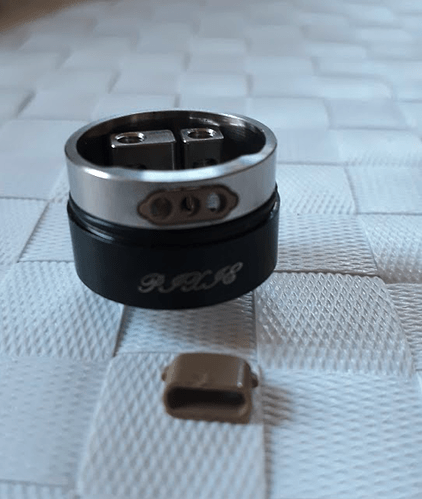 There are two inserts for the airflow, one with three holes and one with just one opening.

They are at an angle and make the airflow go down a bit. There is a little hole on the other side of the middle cap that you can position in front of the middle hole of the insert if you only want one hole open. That positions the airflow perfectly on the coil. 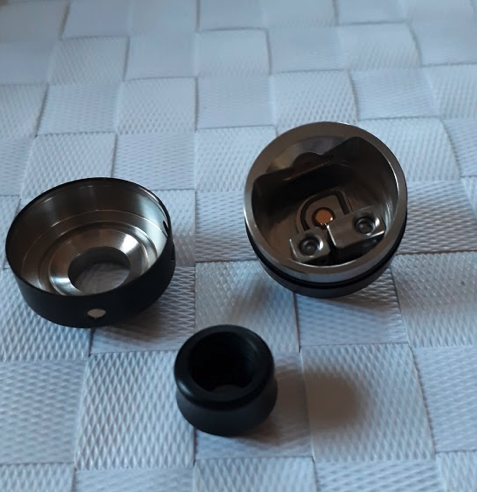 Personally I find that a little too restrictive so I settled for the one hole insert, hence the problem I have with the airflow not getting right on the coil when I close it down.

Problem is a big word though because even under those circumstances this little thing does deliver on flavour.

I’m sure the little bastard will beat me to it one day and I’m not going to poke through her stool to retrieve it.

Since she’s a retriever I will make her do it herself.

I have also used it without the inserts and that works too, so even when you lose both, you will still be able to use it.

I just made a simple coil instead of using the coils that came with it. I couldn’t get a decent picture of that though but I could get a reasonable one with the cotton inserted. 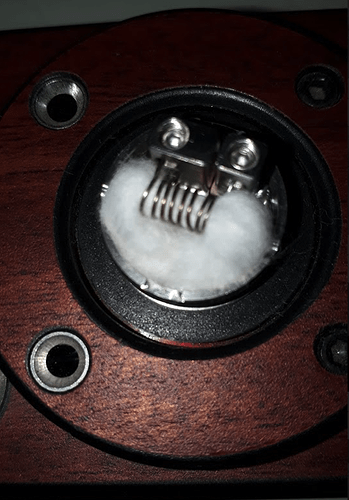 Building on the Pixie is a breeze, especially when you use the slits to place your coil. 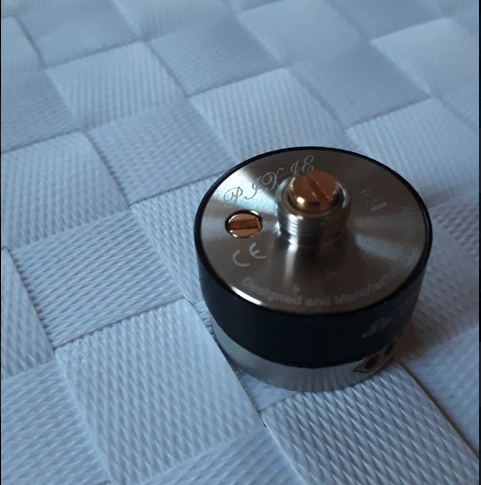 The juice well is deepish but it is tiny so I don’t know about dripping. I have only used it to squonk and have not run into any problems. No leaking or anything and true to what they state there has been no spit back.

So the big question is, can I recommend this and second, do you take recommendations from a scatterbrain seriously?

I can tell you that if you are in the market for a single coil RDA that has an airflow that is a bit restricted and could probably be restricted enough for a decent MTL and also delivers on flavour and is easy to build on, then yes, I certainly can.

Yes, James has replaced our dear Maggie and I only hope that she got a fat promotion and didn’t end up like this guy.

You can find the Vapefly Pixie here
Code JOSE15 will get you a 15% discount.

That’s all folks, thanks for reading and….

Get well soon @Josephine_van_Rijn. Not my kinda thing but great review thanks.

Since she’s a retriever I will make her do it herself.

I came. I read. I laughed.
I was informed.

You’ve done well with your reviews and this one was a good’un. Being a fan of sarcasm mixed with a little snark, I enjoyed every bit of it. I do hope you’re feeling better. Sounds like you got an ass-kicker of a bug.

Get well soon @Josephine_van_Rijn. Not my kinda thing but great review thanks.

OH YES, I know of what you speak @Josephine_van_Rijn try shake drying say, a Steam Crave Supreme for example, and you shake it apart, and the two MICROSCOPIC stop pins, go airborn, AND, you have at LEAST 4 cats READY and WILLING to steal them at the drop of a hat !!!

Not my kinda thing but great review thanks.

Thanks man, I know you are into the heavier material

Thank you too @Fishaddict420 I hope you enjoyed it

I’m not sure I had that in mind

at LEAST 4 cats READY and WILLING to steal them at the drop of a hat !!!

I have three, there’s no peace for the wicked

Sounds like you got an ass-kicker of a bug.

Thank you bro, it was a bastard. I hope it’s gone and stays gone A review with a Fawlty Towers references gets a like from me no matter what.

Thank you, I was actually looking for Manuel, ‘I know nothing’ but I couldn’t find it, so Basil it is.

Great review that made me smile,thank you very much. Hope you feel better soon!

Check it out there is a giveaway for this rda!