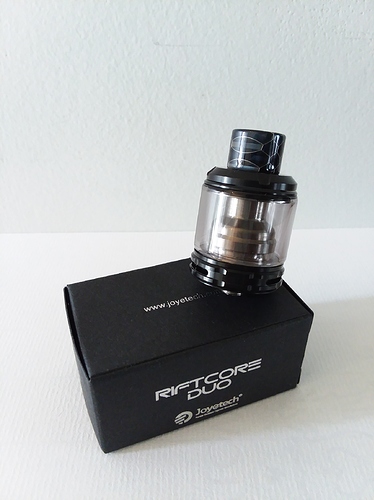 Many have tried, and it seems many have not succeeded in utilizing a coil-less atomizer that could give consistent performance and flavor. It didn’t help the fact that some of those atomizers were running upwards of $80-$100, not only making it expensive, but out of reach for vapers on a budget. That is where the RiftCore Duo comes in, with its Dual RFC Heating Element and sleek design, it pretty much begs attention. I think Joyetech finally saw the market for what it was in adopting a design that would not only work, but perform really well. The RiftCore Duo was provided to me by Joyetech, specifically for this review. 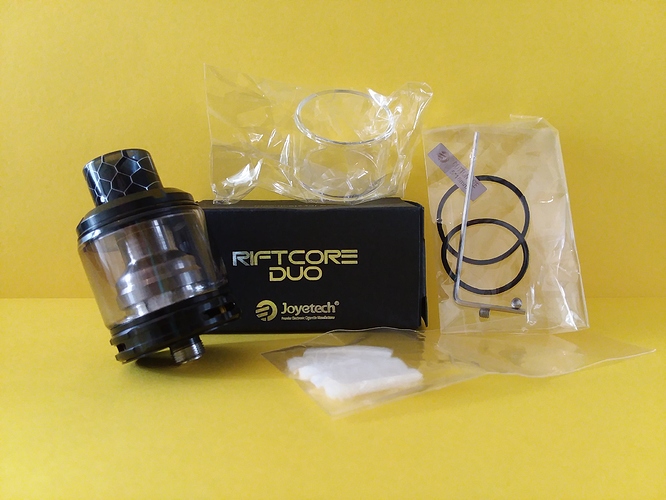 The Design
So, pretty much right away I knew exactly what the design reminded me of, right down to the pattern on the metal around the airflow as well as the top of the atomizer. The Goblin Mini RTA. Even the design on the metal is similar to the Goblin Mini v3. Maybe it’s the shape of the glass, or the body of it, but they look very similar (not counting the drip-tip of course). I really like the look of the RiftCore Duo, it has a nostalgic feel to it while being a new and innovative concept. The overall look isn’t really complex or flashy, in fact the design on the metal is probably the loudest design aspect on the tank itself.

The tank has 3 bottom airflow holes around the base of the tank, and they are much slimmer (vertically) than the other Joyetech tanks that have been coming out. This makes the airflow somewhat more restrictive, and was meant to really put a heavy emphasis on the flavor that the RiftCore provides. The wicking holes form two rectangular holes when the tank is assembled, allowing the wicking to fully absorb e-liquid easily and quickly.

The deck consists of two flat heating elements with 11 holes in each element. The holes for the airflow sit neatly behind the elements, reducing the risk for any leakage that might occur. The elements are held in place by two small legs that are held down by 4 Hex screws. 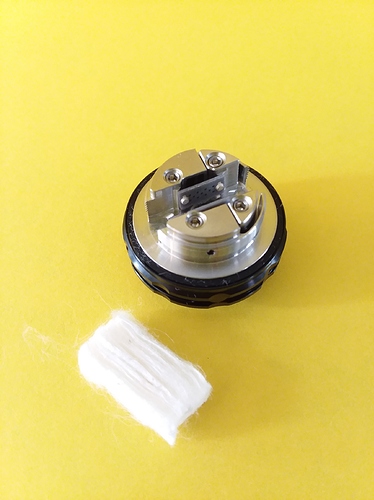 Wicking for the RiftCore Duo consists of sandwiching strips of cotton between the two heating elements. Joyetech provides the strips of cotton in the packaging, and the way this is done is by taking two of the strips and putting them together to set between the elements and trimming them to size flush with the edge of the deck. The drip-tip is a resin honeycomb design, and is a standard 510. 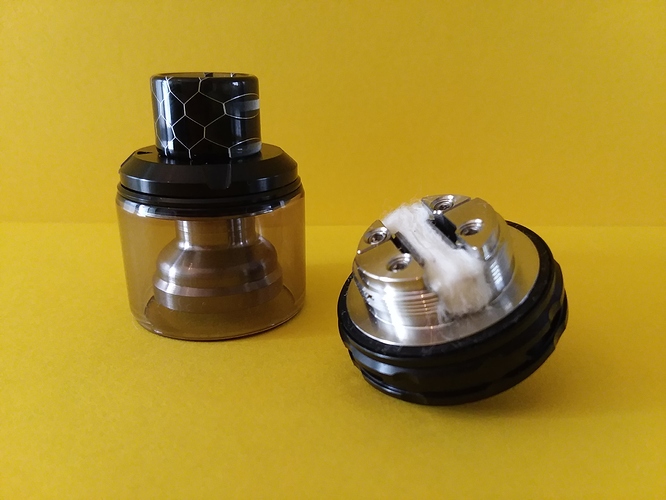 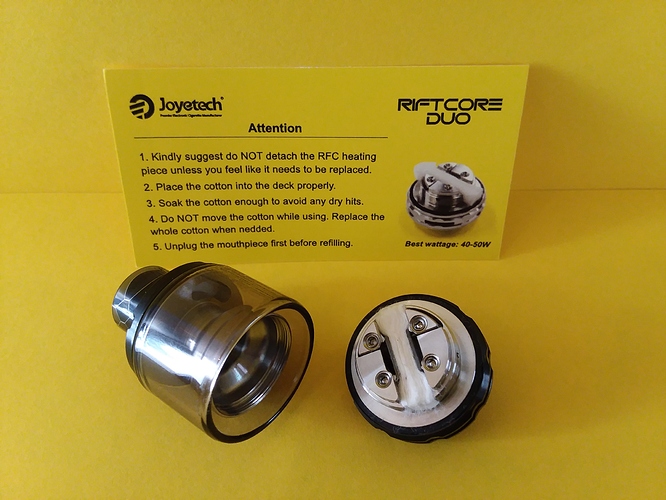 Usage & Performance
Pretty much right off the bat, I noticed something just wasn’t working properly. When I initially heated the element before inserting the cotton, I noticed that one side was heating up much faster than the other. Now, had this been a regular coil, the fix would have simply been some gentle inner diameter strumming. Well, not here. Now, before fixing the issue, I still wanted to see the performance so I wicked it up and used it, and sure enough it was really just browning the cotton, and I could tell it needed to be fixed before I could properly use it.

This is where @cosmictruth comes in. Thank goodness because I have to say I was getting frustrated. We talked about possible ways to fix the issue, and once I actually took the two heating elements off, I was able to see the issue. One of the legs on the back of the heating element was slightly bent close to the base of the element itself. It took a little bit of doing, but I finally fixed the bend without any damage to the element itself. Whew. Good golly.

I was instructed by Joyetech to use RiftCore Duo between 40-50 watts. I have tried fruit, menthol, dessert, and tobacco flavors on it and have re-wicked it several times over. I have to say, once I fixed the issue I have really enjoyed using it. The vape itself isn’t exactly as warm as I am used to, but it’s a nice, moist vape. I half expected a somewhat dry experience, like I get with single wire, but it is surprisingly moist and very flavorful. I found I enjoyed the flavor at anywhere from 36-50 watts. After several mixes, I found a blend of 60/40 VG PG to be the best for this tank.

The RiftCore performs quite well in terms of flavor. There is something definitely pure tasting about the RFC heaters as I have gotten no off tastes from it whatsoever. I have used several of my favorite blends, and the taste is exactly what I would expect from mixes I have used consistently. The heating element resistance is right around 0.25, although this number varied greatly before fixing the bent leg. 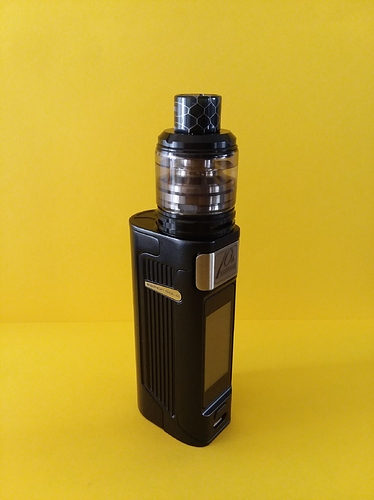 Amber’s Thoughts
Would I have purchased a coil-less atomizer before the RiftCore Duo? Probably not. None of the products that have blasted onto the market promising a whole new vaping experience have been truly worth it. The RiftCore Duo is somewhat different than those previous attempts though. It does boast a convenience and ease of use that some of the other complex or ceramic setups just could not offer the user.

The RiftCore Duo offers users the ability to set the cotton, juice up, and go. It is really simple to set up and use, and I think that coupled with the pure flavor and innovation will be its biggest selling points. I will continue using the RiftCore Duo as it offers a simplicity that some of my other atomizers just don’t, and the flavor is on point. It was a rough start for sure, but seeing as other users have not had this issue, it was probably just a hiccup when the element was being attached. Would I buy another? Heck yeah I would.

Joyetech will have more info on the RiftCore Duo on their site soon, and I will add a link to their product page as it becomes available.
VapeSourcing for Pre-Order

Thanks to @CosmicTruth for helping me retain my sanity.

This one looks interesting. As always, your reviews are outstanding Amber!

Thanks Laura, I appreciate it that

I’ve been interested to see how this one panned out, yours is the first review I’ve read on it, nice job by the way, looks like an interesting concept

thanks for sharing your thoughts

Wow, that is pretty interesting and a great review @Silhouette

I think I am in the doghouse with joyetech but thats ok. This one I might have to buy based on your review though

@Silhouette Great review. I like it when there are issues with devices, and reviewers are up front about it. Glad @CosmicTruth was able to restore some sanity. I hadn’t seen this particular type of setup before, and enjoyed the review very much.

Thank you for doing this review! Very interesting device!

It’s actually pretty neat for the fact that it isn’t a totally ‘dry’ vape. One of the reasons I tend to use claptons and coils with multiple cores is for the moist flavor I just can’t seem to achieve with single wire, nor do I get it with pre-made single wire coils for tanks, but the heating element here provides a pretty moist enjoyable experience. The only downfall for me is the amount of cotton needed to sandwich (its thick) makes it better for 60/40, and I’m more of a 70/30 gal.

Thanks for sharing, and thanks to @CosmicTruth for the assist in “debugging”!

We are still reviewing this device

I’ve rewicked this thing so many times i’ve ran out of the cotton that came with the tank and have to make my own pads with kendo cotton pads. Lucky for me it came with a 5X18mm cotton size template. This device should fit well with ELR for taste testing flavors. It can be completely cleaned and rewicked in almost no time, and the cost is almost free. We are on BabySitting detail so IDK when i’m going to have time to finish my review. I’m just glad I got to try one. it’s pretty cool.