I’ve made a juice that contains the following:

In natural light it’s purple. I presume it’s the grape? According to Reddit it’s Semen that’s causing it to turn that color… I can assure you it’s not 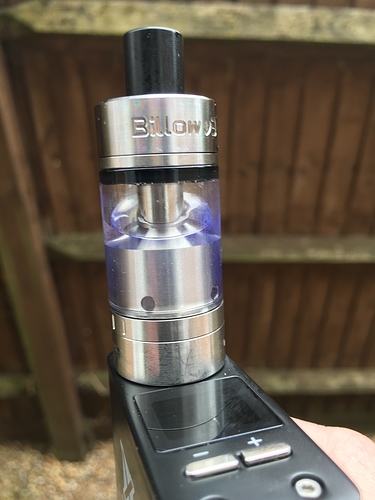 Anyone have any in-depth info on what causes it?

Mixes I’ve made with Grape Juice TPA have looked purplish in the right light. It’s kinda neat. Not like fake food coloring purple, but just a bit.

I used to vape this pink colored ejuice from a local shop. Sometimes if exposed to sunlight and I had been chain vaping the liquid would turn an almost florescent orange color. At that point it became harsh and progressively less vapable. Even adding more fresh juice did not help. The only thing I could do was dump the tank, clean, and refill. I read somewhere once that it was something that happens when the juice is exposed to heat and sunlight. But after a bit of searching I can’t seem to find it.

Is that a billow v3 I see there? How are you liking it?

Yeah it’s nice. Plenty of room on the build deck for Claptons and had no leaking issues. Vertical coils seem to give more flavor but can be a pain to wick. I like it

Also received the Steam Crave Aromamizer RDTA V2 6ml on Saturday which i’ve just put a vertical build in. Not a lot of room on the deck but still chucks clouds.

Just waiting on the Griffin 25 to be delivered to see how it compares.

Atleast it’s not just me!

When I make Mikes Melons recipe from this site, the juice goes a slight blue/purple tint.

I was about to say just that!

Add dye to your e-liquid? I don’t think so!

Awesome…Its the Tpa Grape , i heard this happened but never seen it

Omg this thread is Old Af

Waking up the good stuff @fidalgo_vapes !!!