Just an idea on creating my first "base"

I haven’t even started making juice(or dope, as I call it) just yet, but I had an idea and wanted to run it by some people…
I bought 32 oz of VG and 8 oz of pg and if I combine the two, then that gives me an 80/20 VG/pg solution…here’s my question: I have a 1 oz bottle of 100mg strength nicotine in 95% VG…couldn’t I add a certain amount of that nicotine liquid to my 80/20 solution to make it a 3mg solution? And then from there on out just use that solution in making all of my juice(dope) and my final product would still be a 3mg nic product?

The short answer is ‘No’

You won’t be able to make a fully accurate base of pg/vg/nic unless you are sticking to only ONE percentage of flavoring.
For instance… I might decide that no matter what, I will only use recipes that call for exactly 20% flavoring. If that is really true, THEN I could make an accurate ‘base’.

But, you will definitely need to use the ‘create recipe’ calculator to figure it out properly. 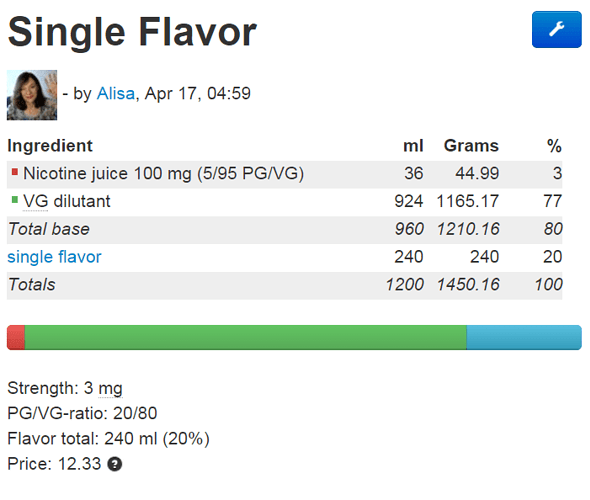 The above is a ‘for instance’ You could use that recipe to make your base by just leaving out that 20% of flavoring. You would end up with 1200ml of Base. You could then later take 80% base and 20% flavoring to make an accurate 3mg nic ejuice.

Like Alisa said, not really. You could do that, but you’d have to input your new “base” as your Nicotine juice and work from there. You’d wind up with less than 3 mg/ml of nicotine. If you are wanting to create a diluted base from 100mg/ml nicotine, you can, just stay well above what you want your final product so that you have some “wiggle room” for the addition of PG, VG, and flavors.

I’m in my first week of DIYing and knowing I’ll be doing small batch (10ml) single flavors for testing, I went with a similar shortcut.

So yes, shortcuts are fine… with simple recipes. But that will change soon enough, so pre-mixing up all of your PG & VG would probably not be a good idea.

ok…so i’m new, i’ve never done this(or anything, for that matter, lol) and i was just thinking to simplify…i guess it could be done, but with some margin of error…
so you guys are saying dont premix my pg, vg and nicotine all together in the beginning…and i’m kinda feeling you guys are saying that premixing my pg and vg all together isnt either?? couldnt i mix my pg and vg like i stated to get the 20/80 solution? and then whatever i add, like nicotine and flavors, may change the ratio a bit, but i dont think it would matter to me…
for the record: i will, of course, be starting with 10 mil batches only
also: thanks to everyone who responded

As I stated, it worked beautifully for me - made things super simple. As long as you can live with a little inaccurate nicotine level and PG/VG ratio you should be fine

As I wrote, I made my base with room for 10% flavoring - some recipes were under, some were over, so nic strength varied a tiny bit. It made my life so much easier though

and also: how did you leave room?

I’m not good at those archaic imperial measurements, but let me try:

You have 946 ml VG and 236 ml PG - Go to ELR and click “Create recipe”, adjust your target PG/VG ratio, nicotine strength and the PG/VG ratio of it. Then add one flavor, just call it “Flavoring” and input your average recipe flavor percentage. I used 10%. I fiddled with the numbers and found that if you enter 1225 ml in “Amount to make” you will end up with this: LOL I do wish America would switch to the metric system and make everyone’s lives easier. It’s too late for me, but I’d love for my daughter to grow up only using metric. Alas, I have a feeling we stubborn Muricans will forever cling to our outdated and arbitrary system.

OK, so according to your “fiddling” I should add about 36 ml of 100mg nicotine…cool, that’s what I came up with when I did the exact same thing…I just wanted someone to validate my “fiddling”…
And seeing how I bought a 30 mil bottle, I’ll need to buy more…thanks, brother…also, you pretty much confirmed my thoughts of working different recipe flavor percentages…I put a lot of thought into things at times, good to know I’m on the right track…thanks again

Yup…thanks, I was going to compute that, but you took care of that for me…
I’m still gathering supplies and more knowledge, but when the time is right, what would you recommend I mix all this stuff in? And do I store it in the same container I mix it in?
Without saying, I appreciate all the time you give me

I mixed mine in a thick plastic/HDPE/PET 1 liter drinking container with click off lid and a sprout. The sprout made it easy to just pour the base into the bottles I mixed in

I have been mixing for 2 months. There are numerous methods of mixing. My first juice mix was made by shaking. As I engulfed myself here reading, reading and more reading I am now using a magnetic stirrer hot plate. That’s just my preferance, (for now). If you read through these threads you will get a feel for what you will like. Lars uses 10 percent flavor. My taste buds are still dead from the many years of smoking, so I’m using 23 to 25 percent flavor. Over time as my taste buds come back I will certainly reduce that percentage. The people here are fabulous. I would not be in the position I am in without their advice and guidance. If your on a budget learn the different methods of mixing before investing your money and then deciding that you would rather use a different method. I hope this helps.

I just shake it and throw it in a drawer. Everyone finds their own way that works for them. A lot of people use a hot plate stirrer like @JohnZena said, or a milk frother. Those typically need to be mixed in a beaker which is why I don’t use them. I prefer mixing straight into a bottle. But, I’ve never made more than 30ml of a juice before…so there is that.

I use a Milk Frother and mix everything in the bottle for anything 30ml or bigger.
I also mix by weight, so I have no mess at all.