Just set up OBS Engine, but flavor not as good as SteamCrave RDTA?

Been hearing about this leakproof alternative to my all time fav the SteamCrave RDTA Supreme. Loving the flavor of it, but tired of some of the leaking (minor) issues with it. Finally picked up an OBS Engine, and loaded it up, careful to not pack the cotton, and vaping it now. Having used every version of the Steam Craves and growing very used to the great flavor they put out, the OBS doesn’t seem to produce the same flavor. It just seems off compared to what I’ve been used to for so long. NO LEAKING !!! which I love. Easy to build on, fill, and did I say NO LEAKING ??? !!! YES, I’ve TRIED to make it leak (guess I got the cotton right).

Sure would love, love, LOVE to have a non leaking tank solution here, but the flavor has me concerned I’ll go back to my SteamCrave ways, chasing the outstanding flavor I’ve grown accustomed to.

It doesn’t seem to be LACKING flavor, maybe a little, but it just seems off, and can’t describe better than that, other than to say, the flavor I get from the SteamCraves is just a better flavor.

Same coils, cotton, and juice, so they are all known quantities. Any OBS pro’s out there, have any thoughts ??

Very few tanks will ever equal the flavor of a well setup Aromamizer Imo. They just nailed it pretty well for flavor. Even the 30mm Plus has really good flavor compared to most of my other tanks and RTAs.

As far as the Engine try moving your coils up higher in the chamber. It’s sometimes hard to line up the coils with the airflow since you actually can’t see the slots. If your coils are too low the air coming into the chamber just swirls and goes back out the chimney without really picking up much flavor from the coils.

Apples to oranges, my friend. I did however get some decent flavor running dual 24g titanium coils on the Engine sitting on top of the Battlestar. Not the worlds greatest, but pretty damn good.

on my Engines (yes Engine S) have 3 (2 reg 5.2ml and a mini) I use SS claptons and alien claptons… but what I have found like Big_Benny_MI said you need to move those coils up. with it being a top airflow I normally have my coils about the height of my the top edge of my posts… looks a bit crazy but really helps the flavor… 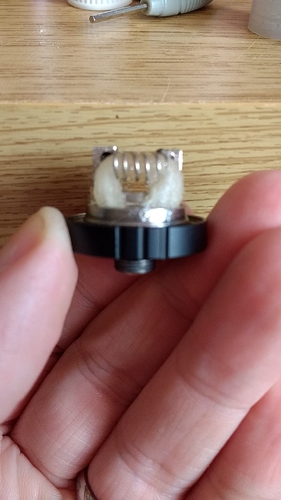 I’m a visual person myself and this is just to show you how much space I try to at least get under my coils with my Engine… this is my mini and this are 3.5mm diameter coils not my best work but AMAZING FLAVOR!! Hope this helps my explanation above and you enjoy your Engine more

I am not one to give up on a tank, but after 2+ months with the Engine I finally traded it with another member here for a RDTA.

Like you, I got an off flavor from it. Never got great flavor from it and it was the least flavorful tank I had. I tried dozens of coils, wicking techniques and nothing worked for me.

I am in the minority on this tank as far as it being a flavor tank. Most swear by it. It just wasn’t for me. I swore at it.

It never leaked though.

The best way to improve the flavor on the Engine is to do what I did, put a couple of 2.5MM @ .2 Ohm fused spaced staggertons in it. If you can’t make those then buy a couple, they will last a long time if you take care of them.

I am not one to give up on a tank, but after 2+ months with the Engine I finally traded it with another member here for a RDTA.

Like you, I got an off flavor from it. Never got great flavor from it and it was the least flavorful tank I had. I tried dozens of coils, wicking techniques and nothing worked for me.

I am in the minority on this tank as far as it being a flavor tank. Most swear by it. It just wasn’t for me. I swore at it.

It never leaked though.

@TheTinMan1 glad it’s not just me. For WHATEVER reason, the Supreme (which I LOOOOVE and tastes the best to me out of all the versions), goes through leaking fits and it drives me crazy. Been wicking all versions forever now, and have it down pat. Cotton is layered covering deck, not PACKED, all holes covered, and sometimes it just leaks a little. Makes it hard to pocket carry. Pisses me off, because I’ve tried a dozen different ways to wick it, and sometimes, it just feels like leaking. THAT was the only reason I picked up the OBS (which won’t leak no matter what I do). Funny thing is, I’ve NEVER had leaking from the RDTA v.1, or v.2, only the Super Supreme.

Everyone’s different, and I’m not banging on the OBS, but it’s hard when you vape on ONE type of tank for awhile, you get USED to it (assuming great flavor), and all it takes is one change (different tank) and it just seems “off”.

@Ninatoad TY very much for the visual. Only have one day on the OBS (did I mention is never leaks ??), and not throwing in the towel, and will try and raise up the coils and re-wick and see.

Thanks out to everyone who responded. Remember Just Say No to LEAKS !!!

I notice on my engine that flavors taste differently in it. I feel like it’s the airflow causing this. Don’t get me wrong though I get great flavor from the engine, it’s just different notes of the flavor. I like to pull my coils up high towards the airflow, even with the top of the posts or higher if I can. Then I cut the wicks just barely past the juice channels as loose as I can get them. It works great! Some flavors taste better in it I think, mainly due to flavors I can only get out of this tank. On the flip side, some flavors taste like shit in this tank too lol. I haven’t tried the steam crave but I imagine it’s amazing.

Here’s a perfect example of the juice thing cause it’s happening to me now! I get Zamplebox monthly and they sent some Tradional Juice “Indian Giver” which is a deep fried ice cream flavor. I requested it (yes you can pick your own juice after you’ve been a member for a while…its awesome!) in a box months later. I enjoy dripping this juice and the flavor goes well with

In the engine, another flavor pops up that I don’t like and I can hardly get through the tank. The vape I get off of top airflow is way different thing. Same thing happens with the Sapor v1. Sorry for rambling on so much

I’m getting the OBS engine tonight and all of your posts have been helpful. I currently have the Pharaoh, two Griffins 22 and 25 ml. as well as the Serpent. My Pharaoh leaks all the time and even though I like the flavor I’m tired of wiping the leaks off my Hcigar VT133 mod. I just want a Tank that doesn’t leak. I have tried everything including taking it apart and changing all the gaskets. I’ve tried wicking it tight, loose and everything in between and it still leaks so I’m going to try the OBS engine. The top air thing sounds like just the thing I need.

I’ll be honest. I’ve never had a leak from the aromamizer Supreme. Usually build dual ss316L Clapton. 2.5mm that springs out to almost 3mm. Horizontal build and just enough wick to cover the holes.

i like the engine a lot.
…not bc the flavor though. i only use a tank when im out, and not having to worry about a leak is an acceptable tradeoff for on the go for me. otherwise I’m a devout dripper.lol

@Chrispdx it’s not that it leaks often, it just gets in a mood at times lol. It does force me to keep my eye on it most times if I’m out and about though…

I’ll agree with “mood”. Lol. It’s not a forgiving tank. She likes to have the coils placed just righ…close to the edge and wicking…,well it needs to be short but just a micron too long. When you get it just right she’s a dream.

I must say I have been thinking about the obs nano. I’m still searching for a single coil rta that truly handles a 3-3.5mm 24g 316L build correctly with airflow that mimicked the crown v1. The geekvape Amit is not that tank.

I’ve been using the Engine Nano for a few weeks now. Been using 316L staggered fused Claptons in it and having no issues. Flavor is really good and no leaking. Really love the staggered posts holes for mounting the coils. I do believe I have 5 wraps at 3.5 ID in it now.

The airflow is more than what you got on an OG Crown tank though.

I keep getting gurgling no matter how I wick it. How do you wick it properly?

@juice_junkie_lover I built it like Mike showed @ about 5:35 in this video. I only get slight spitting RIGHT after a fresh fill, goes away in about 3 hits.

Fill it as fast as you can and take gentle vapes for the first 3 hits or so. Also don’t blow into the drip tip. Top air flow and hot vape juice are a bit of a pain in the lip.