This Kaees Solomon rta was sent to me free of charge from @AtouchMall for the purpose of this review. Thank you Lincoln Zhang!

I know people like to see the packaging and unboxing of products so I will include these photos! 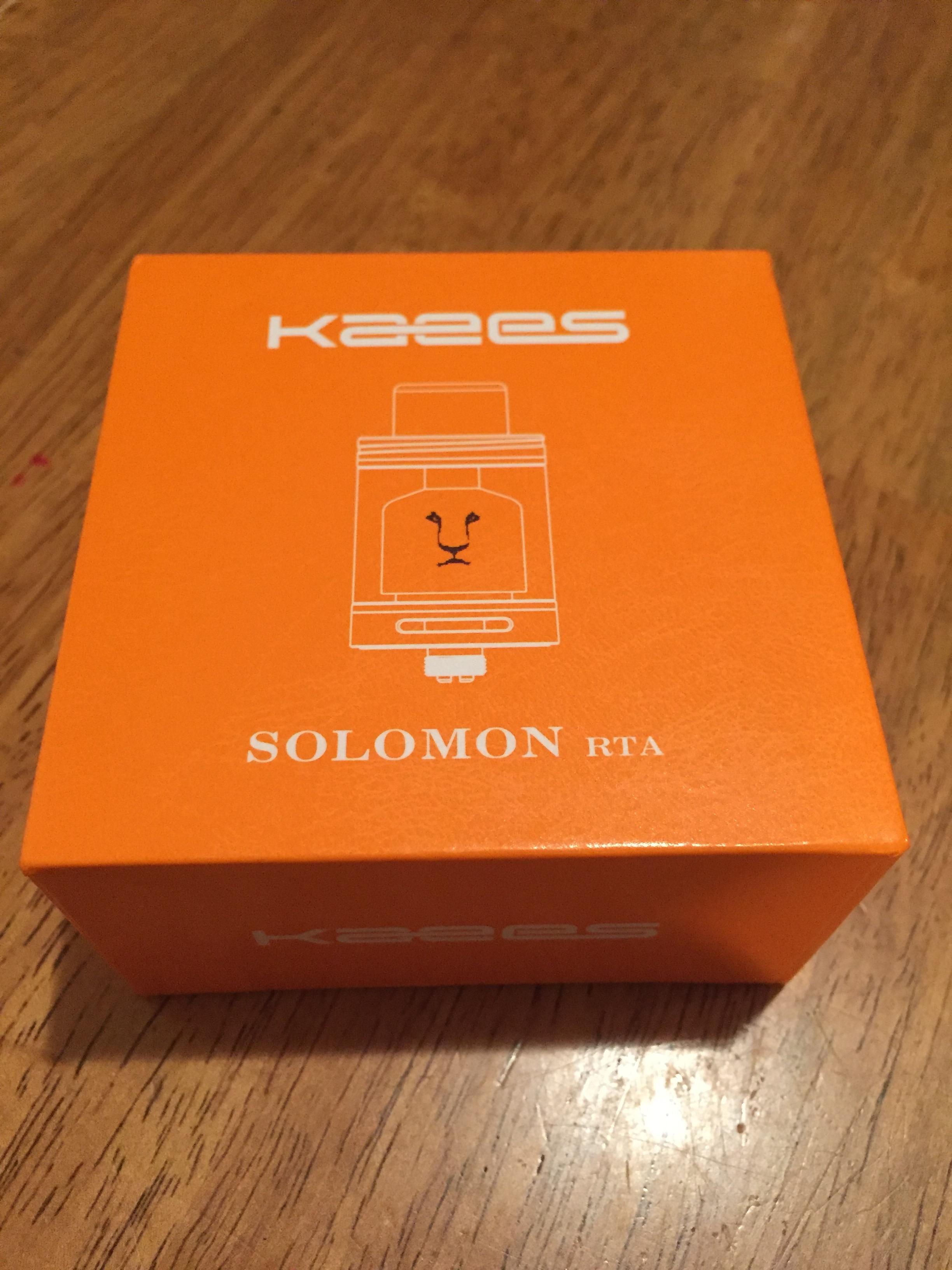 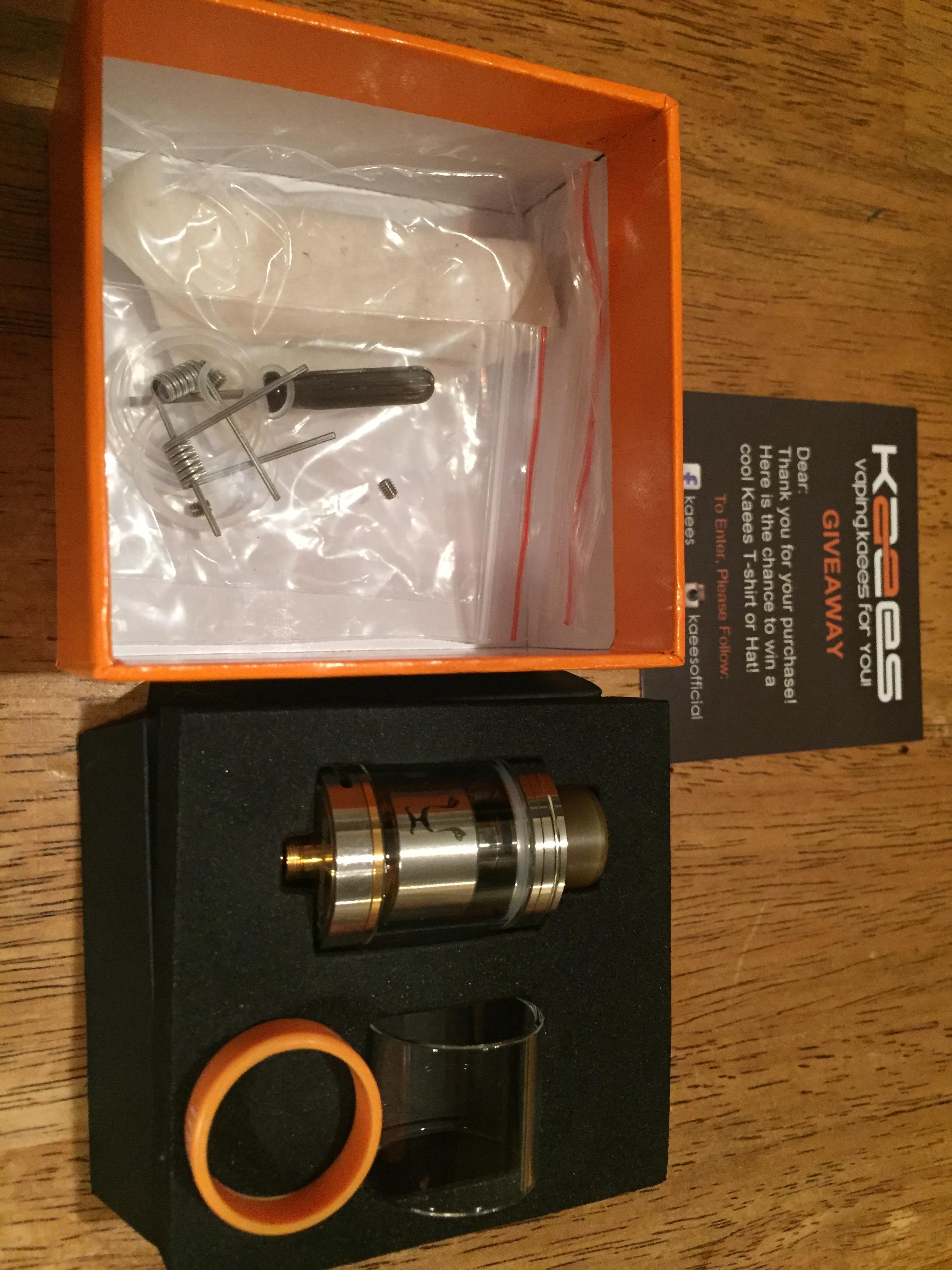 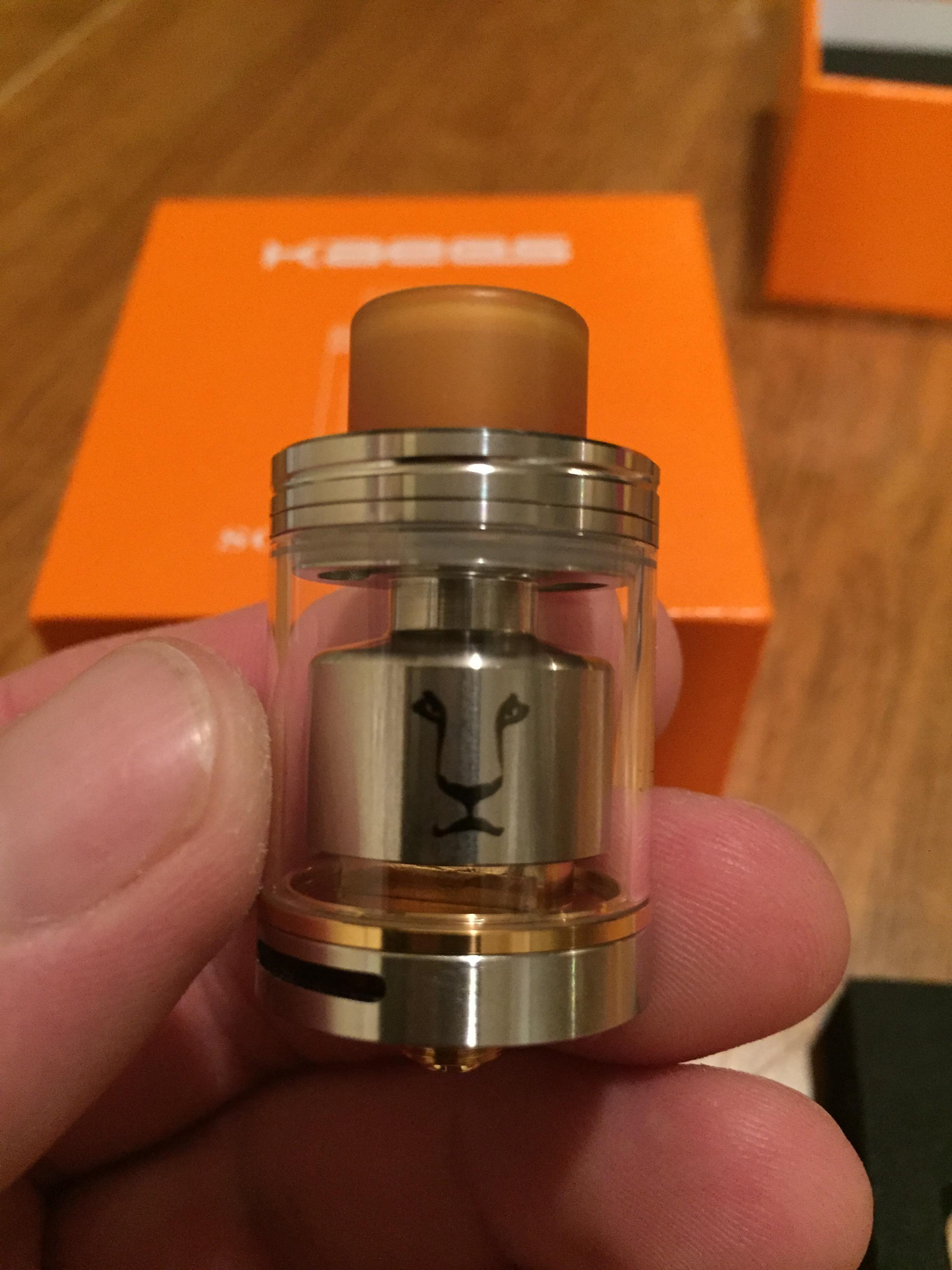 Upon opening you can see the Solomon rta sitting nice and snug in the box with spare glass which everyone will appreciate. Under the tank reveals some extra o rings, premade fused claptons, cotton, a vapeband and also an Allen tool. There’s also a giveaway card to win a free t-shirt! It’s 24mm with a 510 ultem drip tip that’s great for heat resistance! Also the 510 pin protrudes nicely from the threads. Making it nice for mech/hybrid users. It’s capacity is 4ml of liquid. 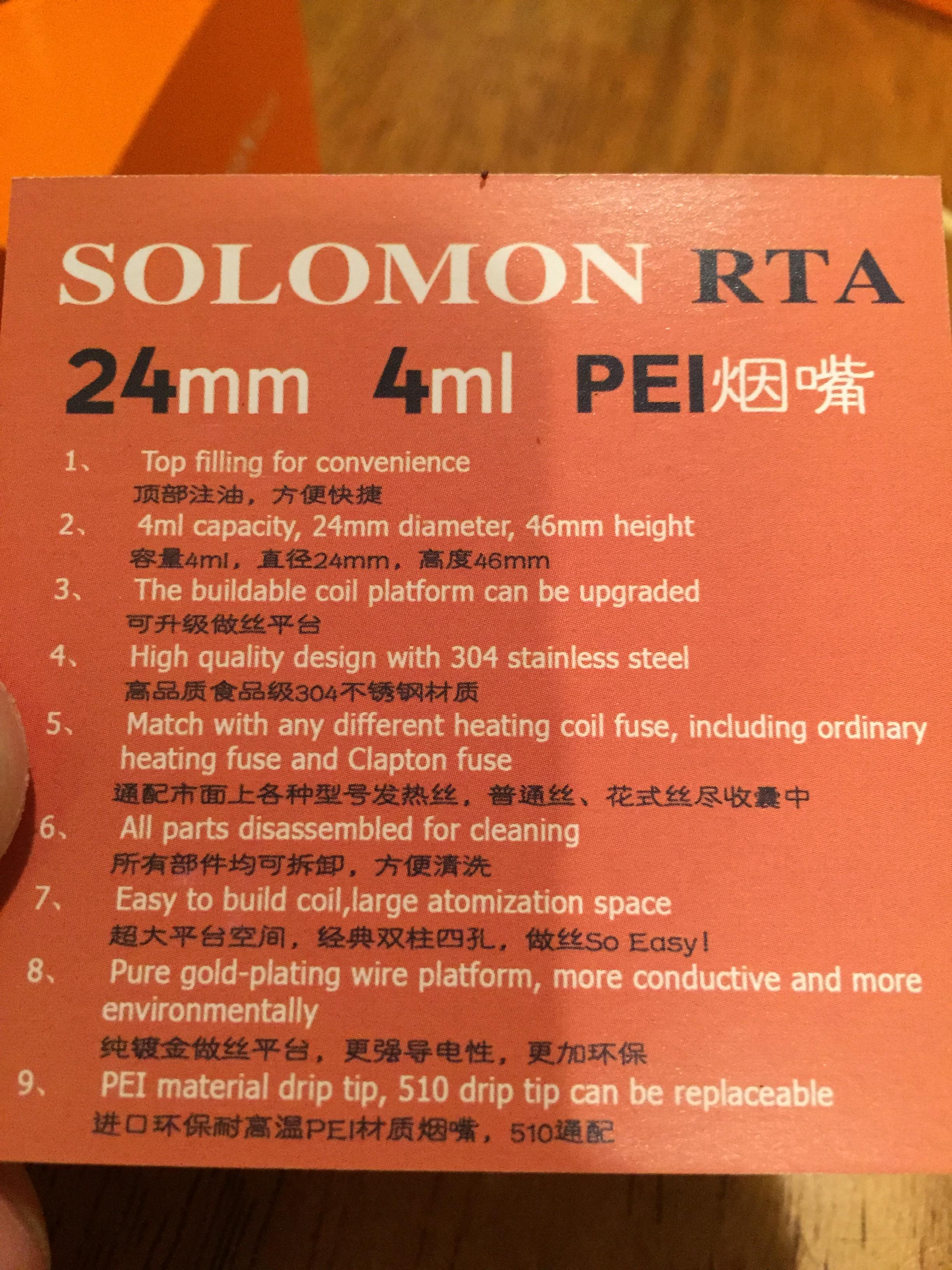 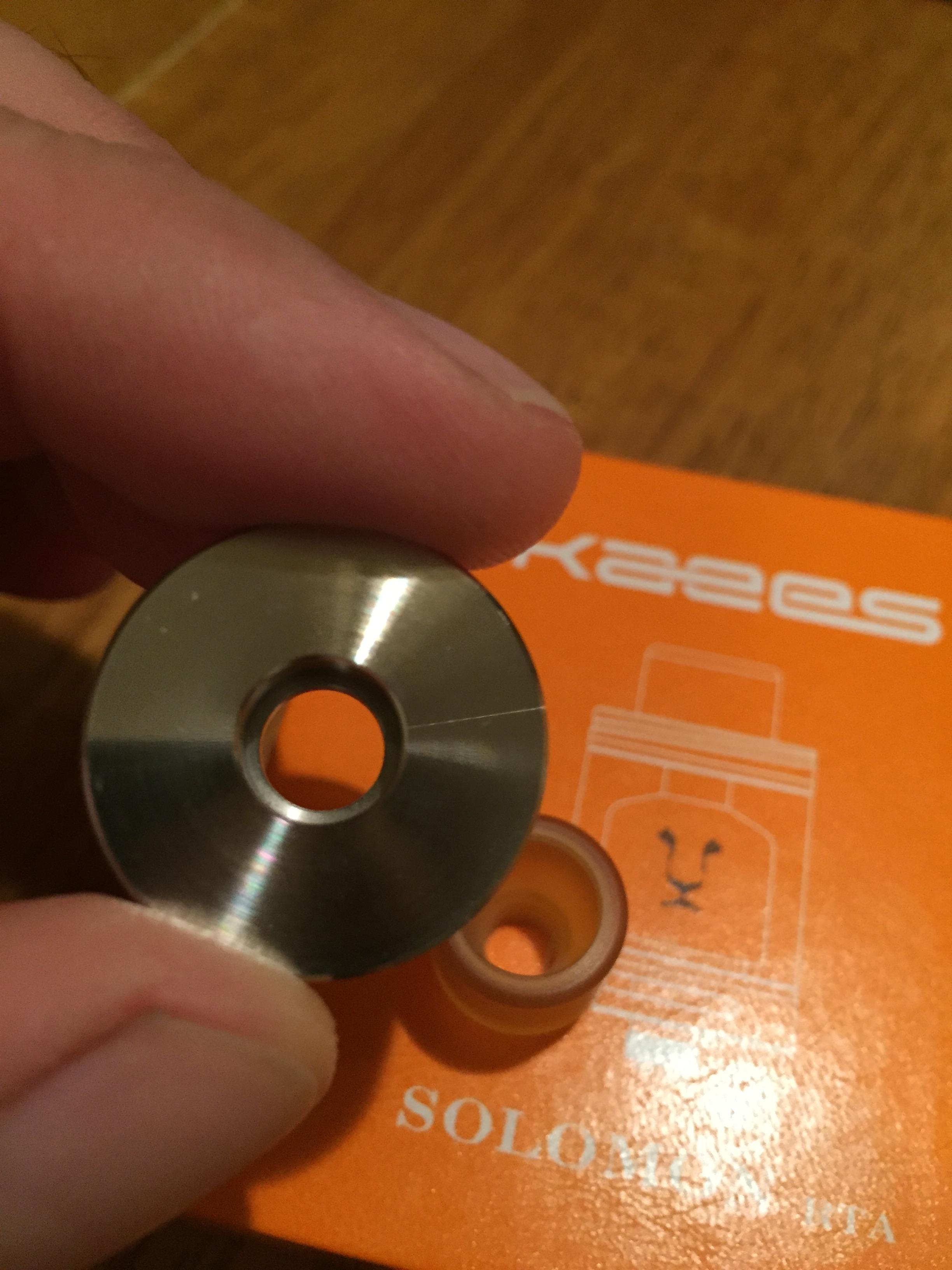 The build deck: a two post deck with Allen screws to secure coils and is plated with 24k gold. It’s very easy to build on I might add. I also am using the premade claptons that came with it for the review. Also there are interchangeable decks for this rta, but I really like the one it has already it’s just like the nalu by Vaporesso and many other dual post rtas. Everything threads together nicely as well. The threading was quality machined. It’s smooth without the nails on chalkboard sound I’ve had from other tanks. 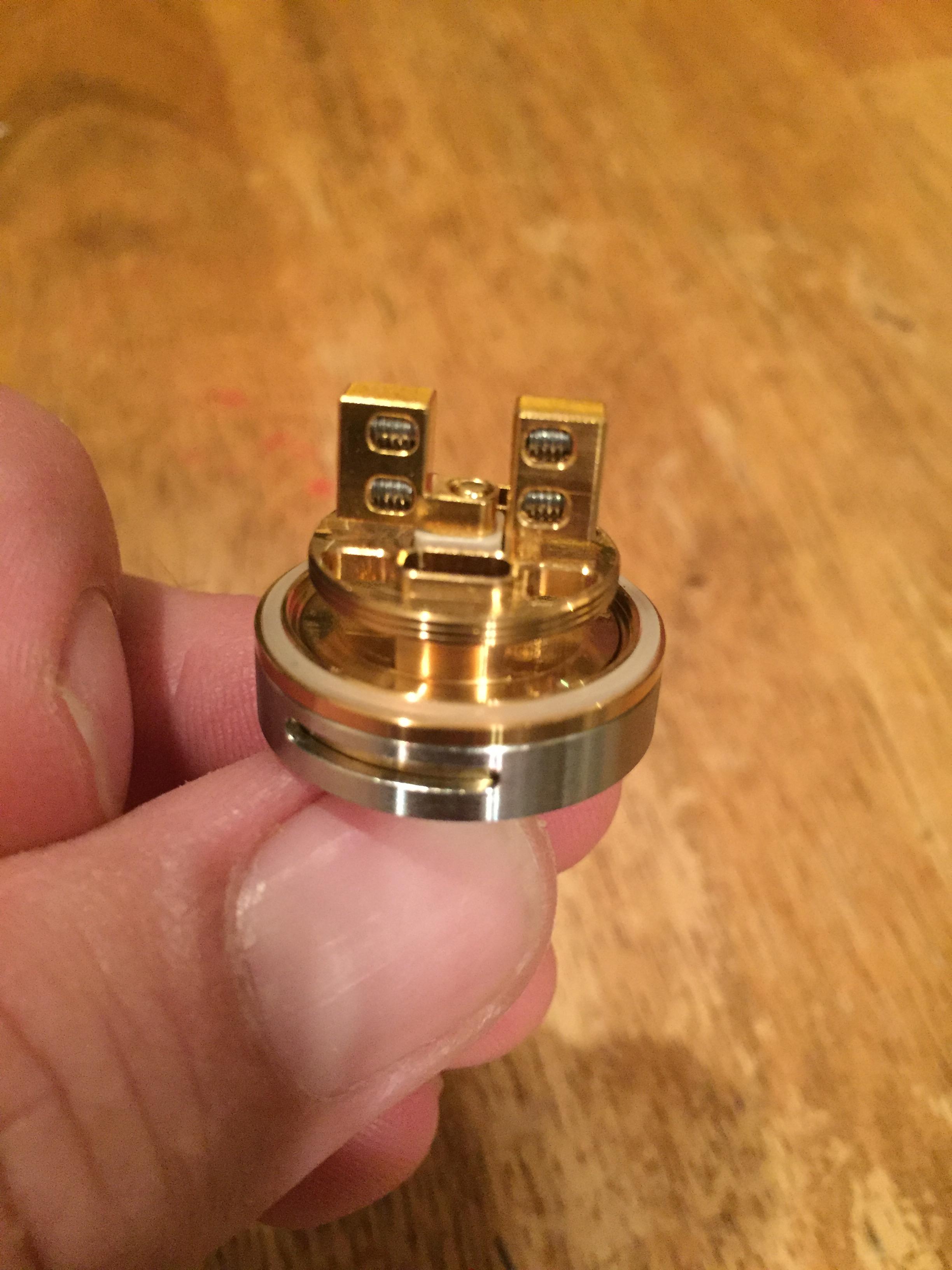 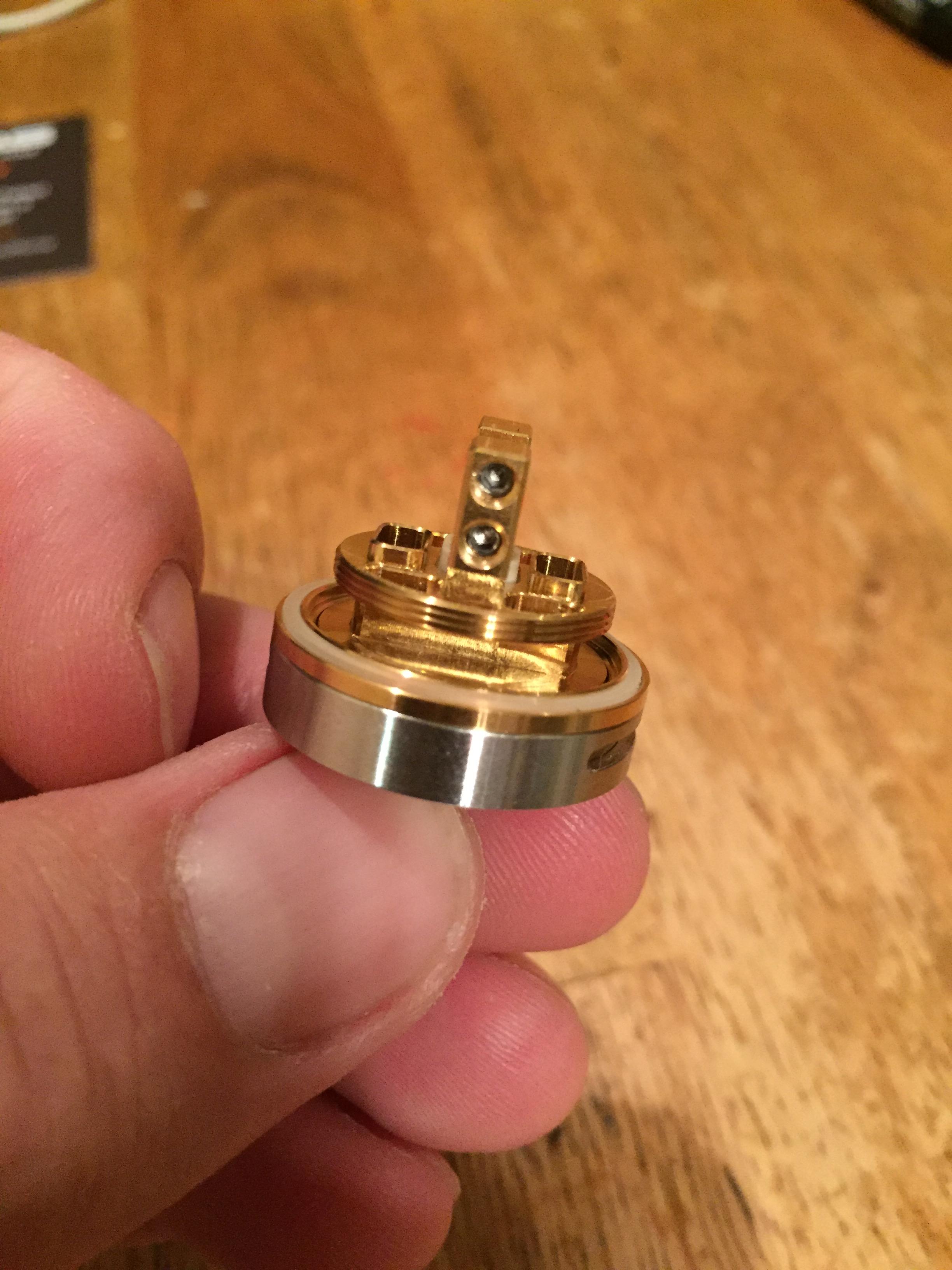 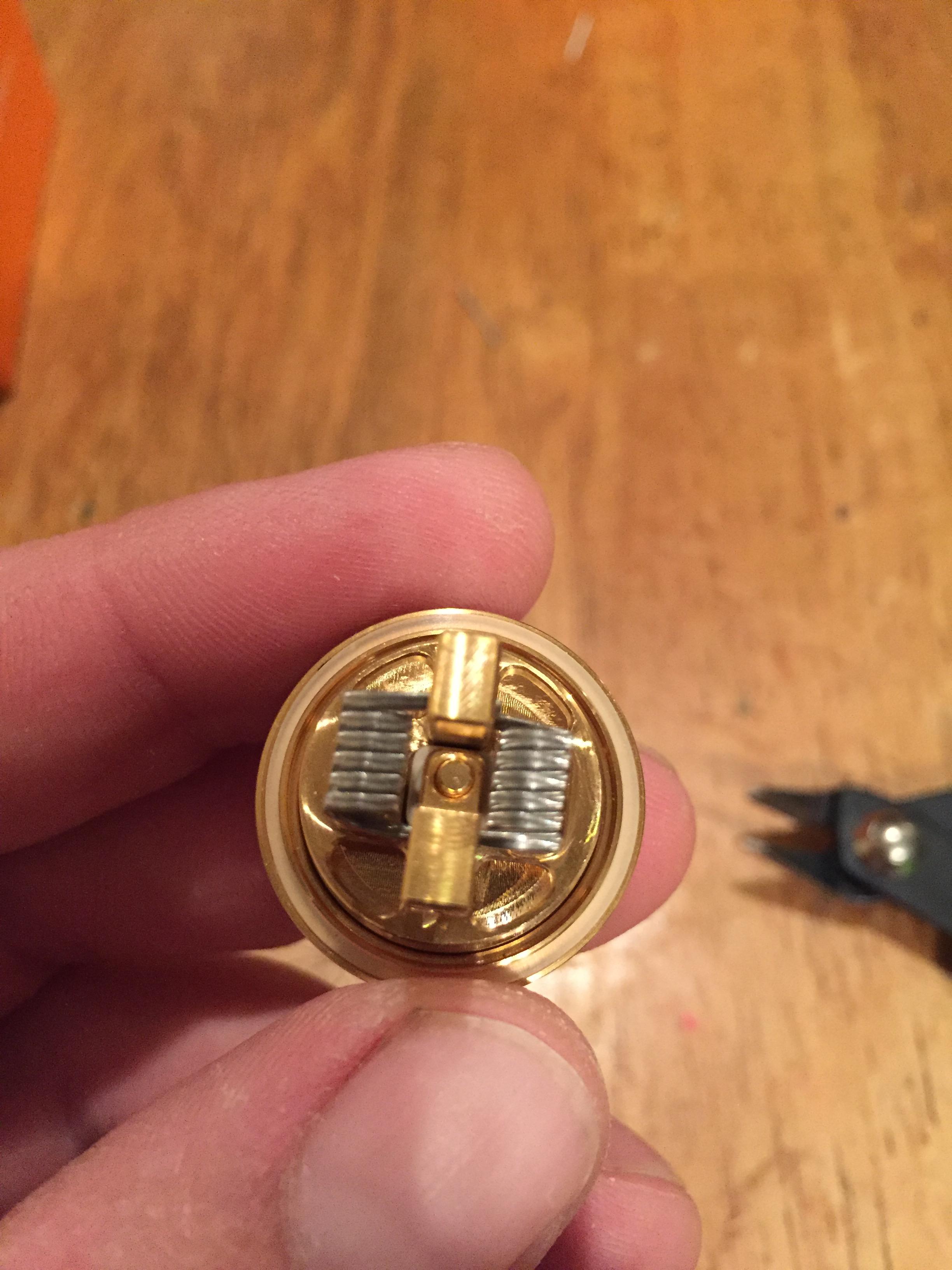 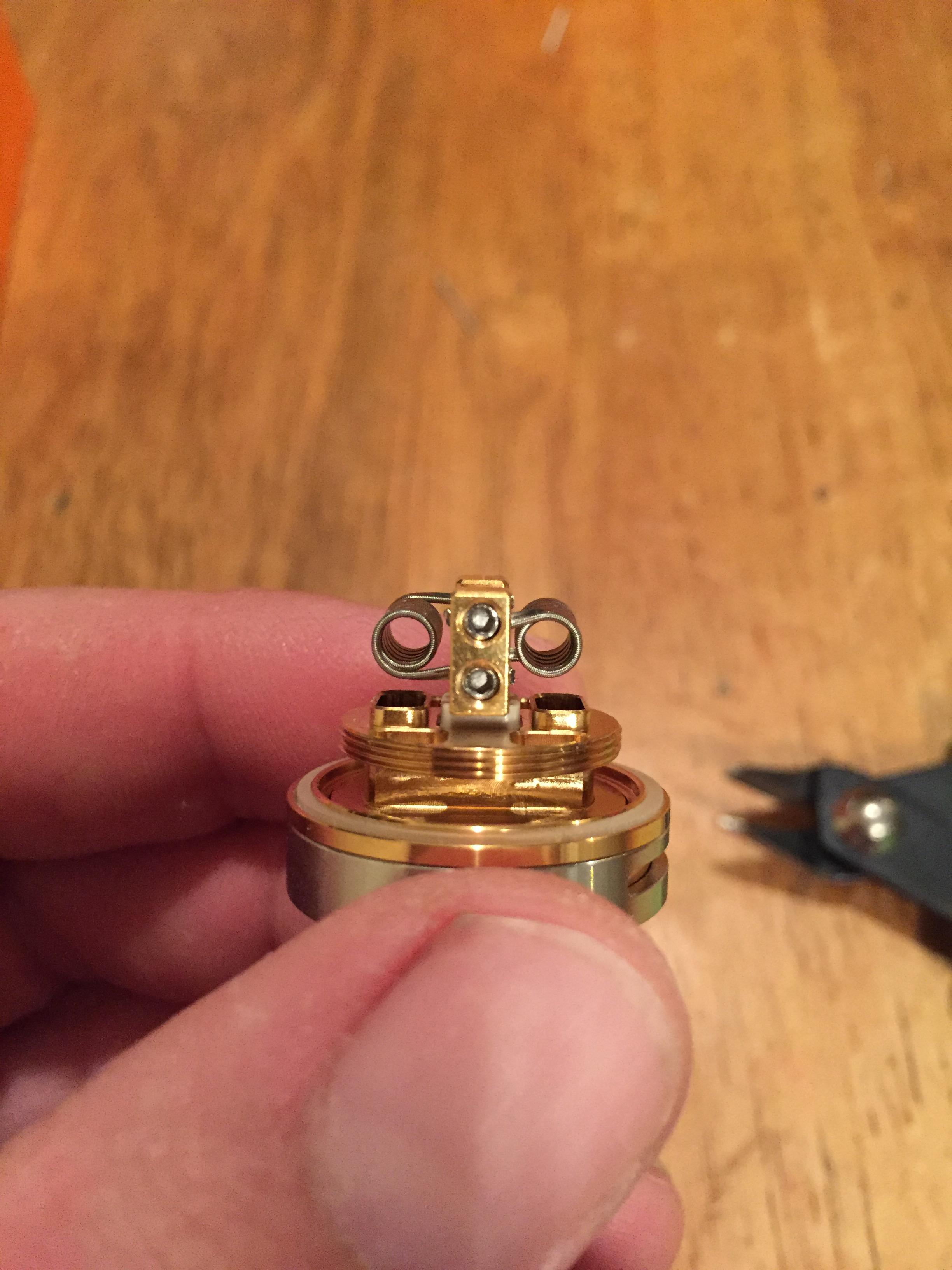 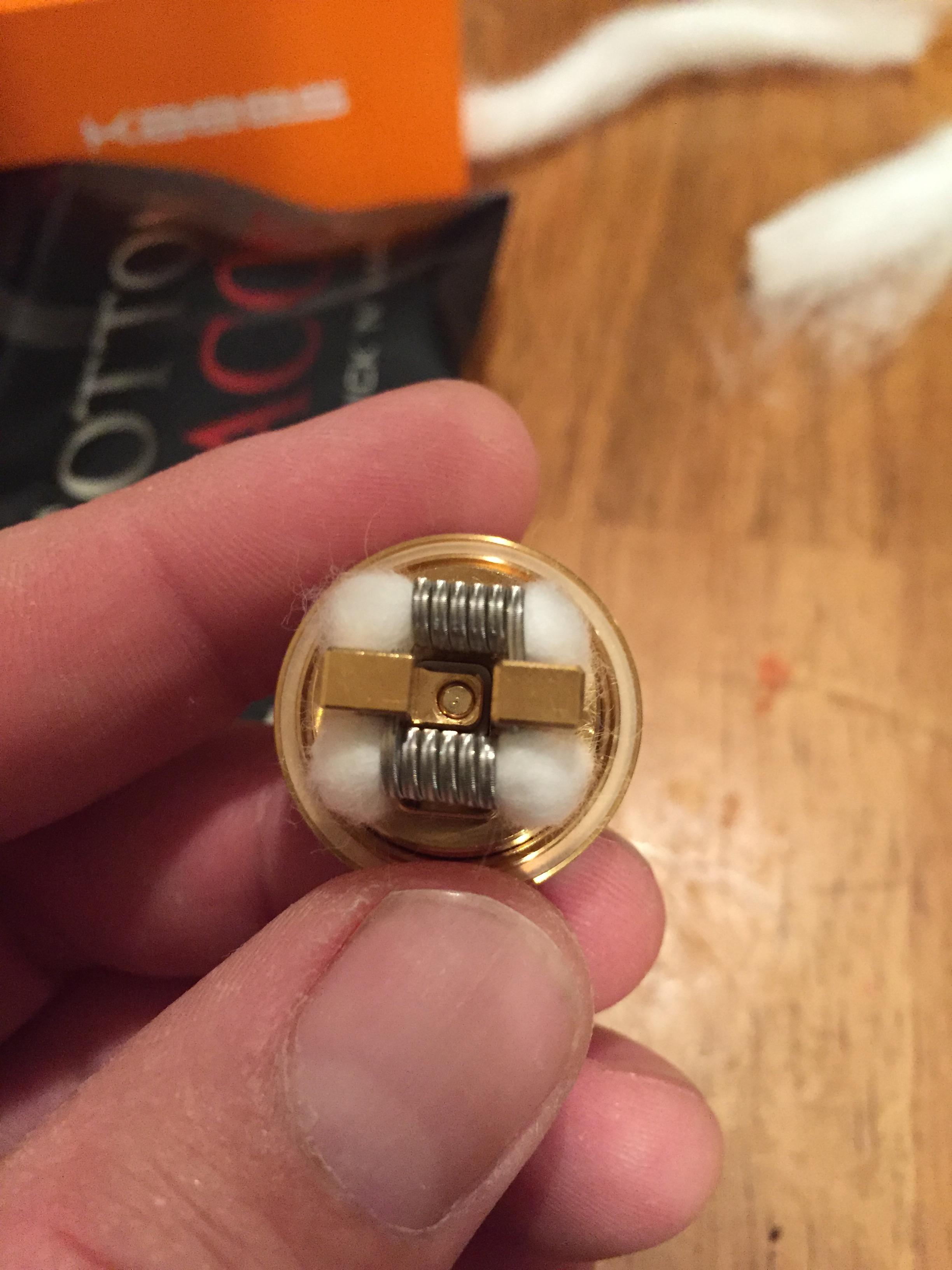 After installation of the coils it ohmed out at .19 ohms! It’s a nice deck and really simple to coil and wick! Now for the fun part of the review! Let’s fill it up
with it’s nice top fill feature which has two really large slots to make it an easy fill! 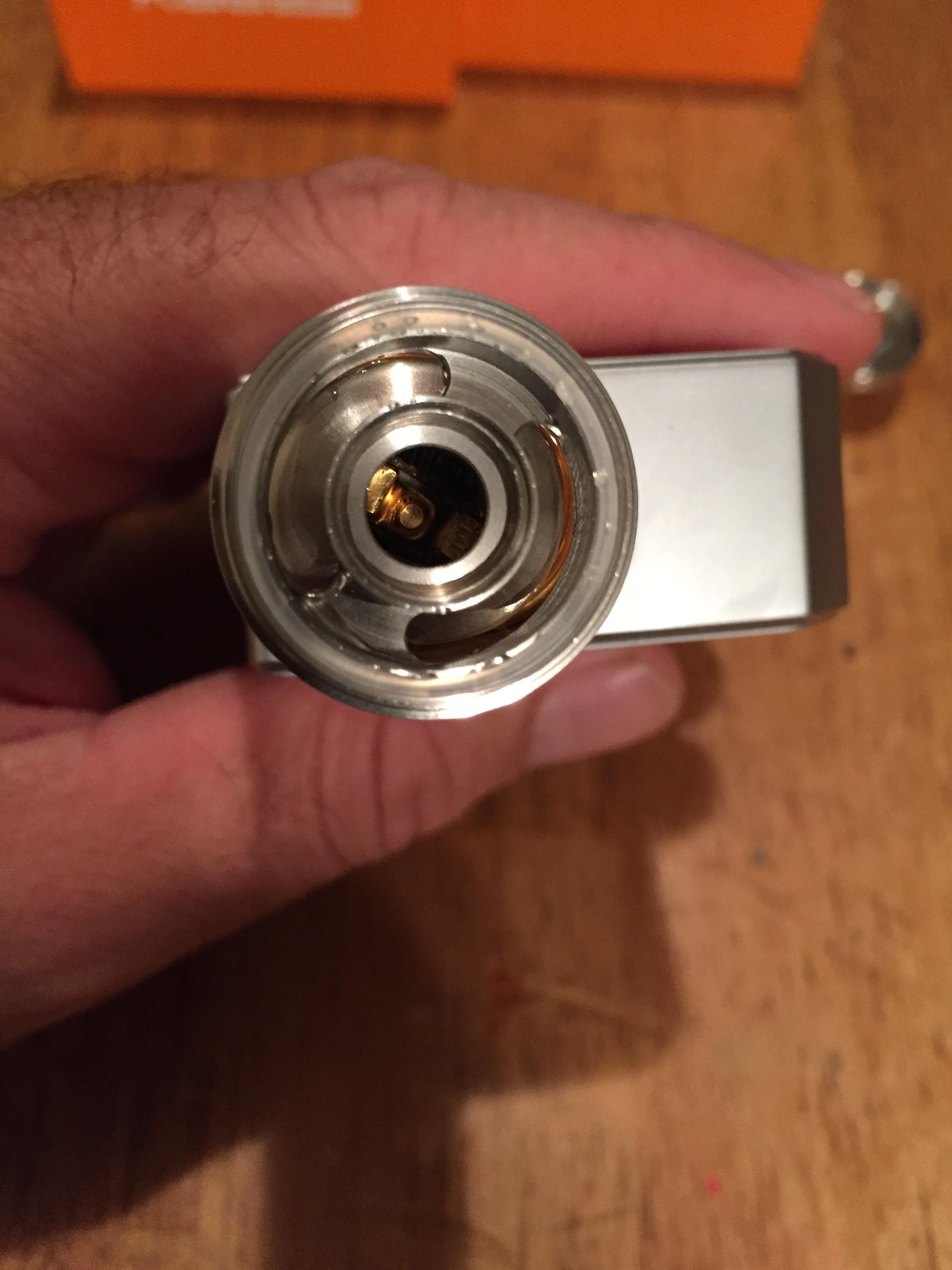 Here it is nice and full sitting on my Voopoo Drag! 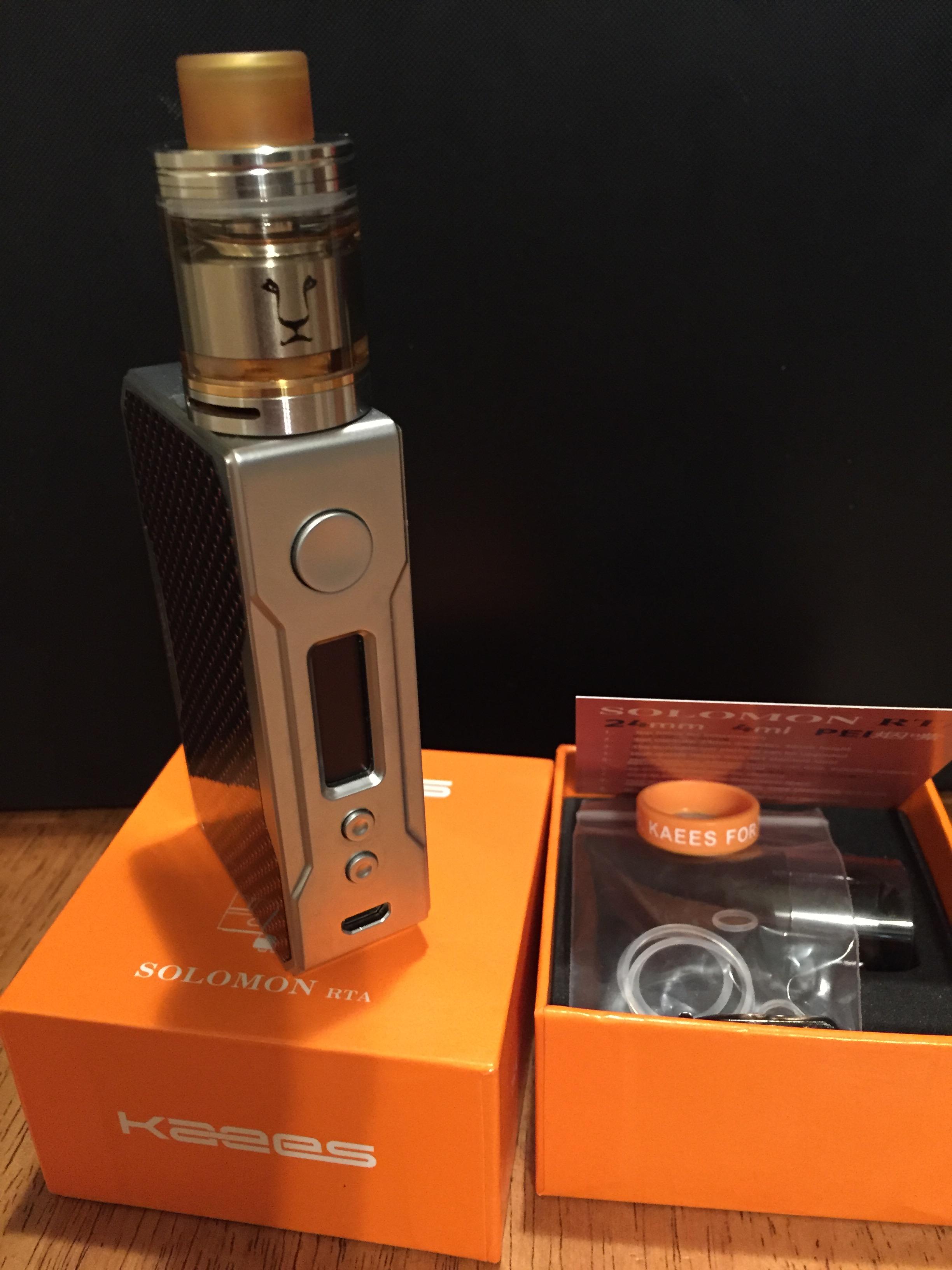 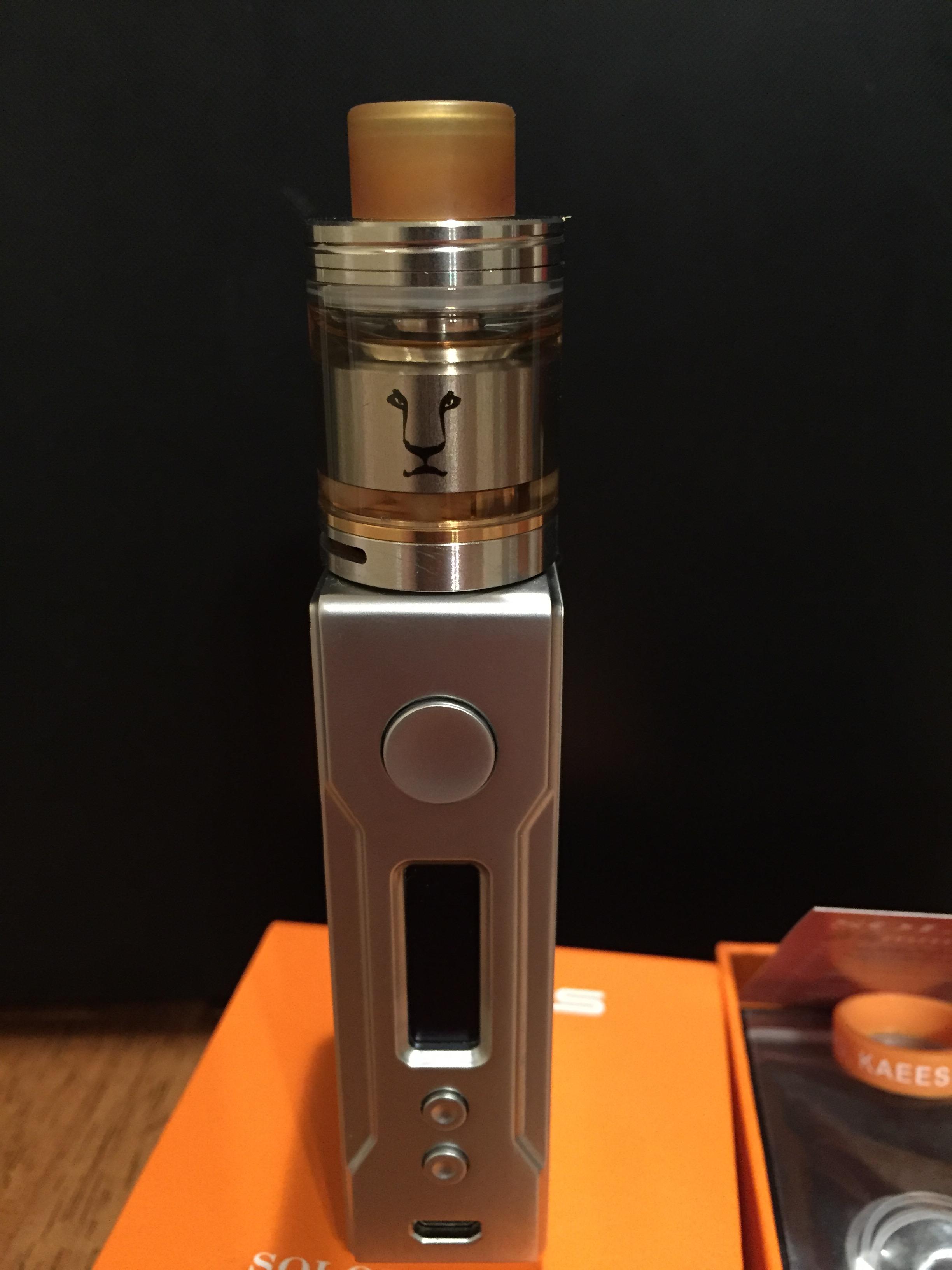 Cons: Can’t really give a con, but since there should be one I guess it’s probably the capacity. It seems like enough, but you vape through a full tank in no time! Definitely bring extra e juice if you plan to leave the house otherwise you’ll regret it!

Vaping and final thoughts: I must say this Rta is a real nice flavor producer and yields nice clouds! The claptons that came with it actually surprised me! They were very nice for premade didn’t even have to strum them! Put em in and dry fired them and they were ready to rock! I Tested it at 70 watts at .19 ohms! Overall I really am enjoying this rta and is a nice change over my usual rdas. I think this rtas strong point is the flavor it delivers! It produces rda flavor but with the convenience of a tank! It also hasn’t leaked on me if anyone is concerned about that and haven’t had any dry hits on it either! Also the quality of this rta is top notch. There’s no burrs or bad threading everything is on point! If you are looking for a nice rta or just want something new I’d say pick this up from @AtouchMall you won’t be disappointed!

Once again I’d like to thank @AtouchMall and Lincoln Zhang for sending me this for the review! Any questions feel free to post! Also anyone interested here’s a coupon code for atouchmall to save 15./. Deadline for the code is Dec 31. It’s ATM15

I tried one at ECC and really enjoyed it.

Just by chance… Did you receive this today?

Yes sir I did indeed! I’m really enjoying it also! Will continue using and update the review with additional thoughts if necessary! Why do you ask? I wanted to get the review out before someone beat me to it lol!

thank you @GalacticResidue , and welcome to visit and buy guys

Thanks for the review, GR! Sounds like a keeper!

Thanks for the review petal! Good job

Thank you @Lolly hope it was helpful! Been using it for two days straight now and the only bad thing I can say is that it eats juice! Lol