Don’t know where to put this or if I should even put in writing.
Grandson goes to middle school. Apparently there is a problem with the kids using Juul, or pod system vapes. School was urging parents to come together with an idea of how to stop, what should be done.
Days later a friend of mine at work had a new aspire breeze. Told me to try, see what I thought. I did. He said hit it again. Wow… I actually got a buzz. I mean for a minute or so, I was kinda floating. He laughed, it was 50 nic. Lord. No wonder. No nausea, but I can see why kids would do this. I was a kid once. I would’ve got a kick out of it.
Instead of banning flavors, wouldn’t it be a better idea to limit the amount of nic? I mean 50 in a salt vape? Isn’t that a tad high? Maybe a limit of 30?

Yea I think we should just ban life and parenting, turn our kids over to the government to raise, all will turn out better that way. No bumps or bruises, no experiences outside those strictly controlled by the committee. @Debbiej no offense to you, just tired of the mob telling everyone what do, say, feel or praise.

I can understand. Freedom is limited anymore.

LOL, please let me know where it may be.

what to do ? what to do ??? in junior high i dabbled with alcohol and weed then in high school i drank alcohol as much as possible and did shrooms , acid , cocaine , popped pills , tried meth and i was what most would consider a jock … i mean b4 every hame we smoke out and got as high as we could and after the games we went out got drunk etc so if using a vape in high school is the big issue today so be it… i dont condone children using anything they shouldnt but none of us are going to stop kids from experimenting and that is a fact #nomoreregulation oh and btw i also started smoking in high school and didnt quit until vaping 3 years ago … thank god or whoever that vaping saved my life and i truly believe that

Underage drinking is a much bigger problem, yet it is ‘acceptable’ as a coming of age thing. I did it, absolutely. Vaping is so less dangerous yet so much more villifed. Go figure.

Lets hope parents take the time and effort to educate their own. It’s hard to properly legislate a product that has both good and bad properties if used incorrectly.
“Expect the best, plan for the worst, and prepare to be surprised.” - Denis Waitley 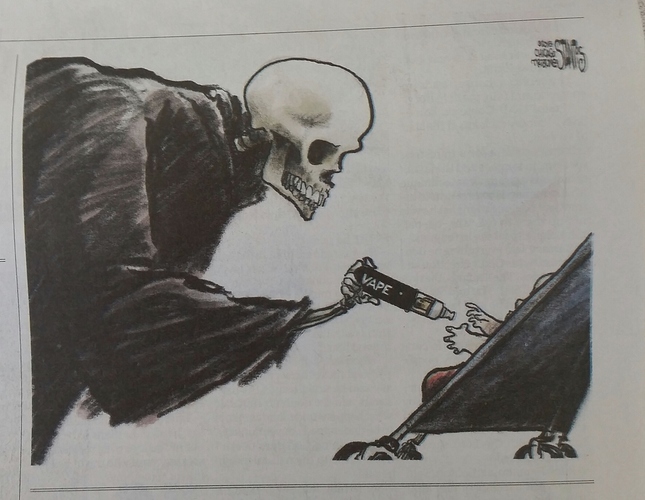 We’ve been down this road before. So many forces at play here, guberment, tobacco industry, pharma industry, adolescence, parenting, getting high however that occurs. So many perspectives from macro to micro. How do you impress upon an adolescent that a life time of addiction is not what they want to chance when their brains are not developed enough to comprehend consequences? How do you circumvent human nature? Do we want perfect people and if so who get’s to define perfect? Are we once again becoming hyper-focused on a quagmire that will do nothing but waste energy? Who will pick up the lance, hop on their donkey and lead the charge into a windmill? Is the impossible dream a nightmare or is it really 42?

Wow… I actually got a buzz.

That’s how I felt when I started smoking cigs at age 12! This is a non-problem problem through my lense. Assuming these same kids would probably have picked up smoking if there weren’t electronic versions available, they are way way way better off vaping. Kids were hot-boxing whole cigarettes in the boys room in 7th grade (in '87) like seriously consuming a cigarette in about 60-90 seconds. This is a blessing in disguise as an evil epidemic!

I remember I started, but I had friends who were years ahead of me. They told me that buzz would reduce itself to nothing soon and I didn’t believe them. They laughed at me. Of course they were right. I remember plenty of hotboxes in the dead of winter just to get it the hell done. Horrible. Anyway…

I agree that between the two, vaping is the better choice by a massive margin. It just pisses me off that there is such a refined, aggressive attack on vaping while underage smoking and drinking are still accepted as ‘kids will be kids’ type behavior. Sure there are ads and campaigns against those things, but it seems that vaping’s been considered 100x worse than both of them combined. And the worst part is the $ource of the propaganda.

The public knows the dangers of smoking and the risks of drinking (like drunk driving), so anti-campaigns are a given. But the public is intentionally misled about vaping and accept the anti-vape brigade and their nonsense at face value. That’s burns my arse.

The good ol’ FDA has refused to share all the math in their “epidemic” tirade. They say 14% of high school students (that’s 4 grade levels) have “Tried” vaping. What they didn’t include is that 11% of high school seniors “smoke” cigarettes and 36% of high school students are binge drinkers. The last two they don’t bring up because it doesn’t increase the value of tobacco company stock. I think a lot of the problem of underage vaping would go away if parents took their kids credit cards away.