Thank you @Heaven_Gifts for the cool giveaway and the chance to use this tank!

I stuck this in the hardware reviews, but let me preface by saying I’m NOT a reviewer. I may or may not include some pics at some point, but it looks pretty much the same as it does in the pics already out there.

Funny story brah—the kiddo decided she deserved to open something because she “never gets anything.” (She totally didn’t get a new toy at Walmart and a new app for the iPad this week or new playstation games last month or anything…) She ran off with the strip of plastic that has the gold stripe in it that helps you open stuff and the cardboard with the swirlies that covers the outside cuz they were ‘pretty’ I guess. She’s so weird.

The Long:
Typical stuff in the box. Tank pieces, extra grey glass that’s pretty nice looking with the black, 510 drip tip adapter, red (why red? no idea) o-rings, extra screws, silicone block thing, little black screwdriver, warranty card, and a pair of undisclosed material clapton coils. Conspicuously missing, cotton/wick and a manual. Also “missing” is a drip tip, which I should have paid attention to. More on that later. The coils came in at about 0.18 installed together and 0.33 when I pulled one out. Closest I can guess is that it’s something like 32 gauge around some type of ribbon wire cuz it’s kinda flat looking.

I took it all apart (which was a feat, lemme tell you) and scrubbed it down with soap and hot water. The black part of the tank had some weird ring of stuff on the inside that was kinda pinkish in places. At first I thought it was corrosion and I was gonna be really bummed. But, I managed to scrape it off and it didn’t leave any kind of etching in the metal, so I’m guessing it was paint.

It took me a hot minute to get the coils the way I wanted them and figure out wicking and stuff. I put both coils in at first but wound up taking one out. It was taking nearly 100w just to get any kind of glow and I am not crazy about using that much power. Don’t ask. It took even longer to figure out how to put the pieces back together the right way. I figured out you have to put the glass on first, then the bottom piece of the top part of the tank that has the fill hole, THEN the silicone block thing, then the top part of the tank with the airflow and stuff. I kept trying to push the bottom metal piece over the coil and block and it wasn’t working. It was late, gimme a break.

I filled up with berry cookie custard, then realized it didn’t come with a drip tip and I don’t have a wide one. I put on the 510 adapter, tried all of the tips I had, and decided I like the anti-spitback one that came with the aromamizer. Nice to give it a home since I use the tips @bradslinux made for me on my 'mizer.

Vaping it on the VT133 and here are my thoughts. Keep in mind I have never used clapton coils, I haven’t used kanthal or power mode in about a year, and my tastes are weird and probably broken.

I’ll probably wind up taking out the clapton coil and rebuilding with SS or Ti when I finish this tank. I’m not sure how much of the guzzle, gurgle, and flavor are due to the coil and I’m interested to see if a ‘normal’ (for me) coil makes a difference in what I think. I’ll reserve final judgement until after that and update if needed.

Overall, I like it a lot. It’s really pretty and definitely different than everything else I have. Given the choice between the two, I’d probably buy an aromamizer over this, but I’m really stoked I have it and have the chance to use it.

The Short
It’s really pretty and it’s nice, but at this point I’m glad I won it instead of bought it.

I went through nearly a tank (6ml-ish?) in the hour or so I was messing with it. Got a bit of a nic buzz. LoL

Mission Accomplished~! Congrats on the win

Congrats on the win jojo. Hope you have a bit better results with your “normal” coils.
I have the same rdta and i just can’t take to it, hot, spits all the time, way to fiddley and not great on the flavour. The more i use it the less i want to.

I did, however, notice that the griffin drip tip fits in there perfect so if you have one, give it a try, makes a hell of a difference.

Nice review!
Congrats again!
And last but not least, thank you for sharing your thoughts on it! Very informative. =)

So I rebuilt this thing with some plain ol 26g Ti and used hemp wick. It was a little tricky to get the hemp to the place where TC worked properly and there were no hot spots, but it greatly helped the flavor and gurggling. I also found out that @bradslinux’s drip tip fits pretty nice on it, and, even better, seems to eliminate any spitting. It makes it a little tall and looks a lil funny in the pics but it doesn’t look as strange in person. LoL 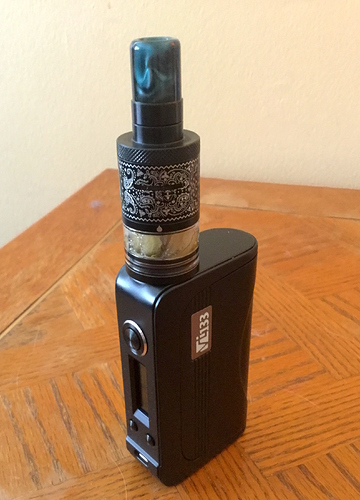 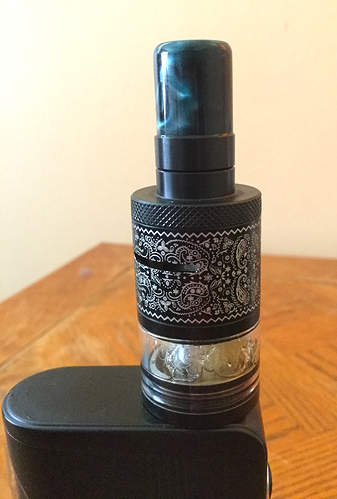 Yours is way prettier than mine, which is just flat black with the logo. Mine came with a super short chuff cap that really makes me fear a spit. It’s so short i cannot call it a tip at all really.

Wicked review JoJo. I think that tank suits you. I have one as well and I think your review pretty much nails it.

I’ve had this tank for a couple of days now. Once I got into the wicking it’s really good. The big deck is asking for big coils and this is where it gets too hot . With a smaller build I can use it with the wide tip and it’s great. I haven’t had had any spit back gurgling yet and find the longer wick stops any leaking. I’ve been using it more with the single coil set up, straight up Clapton 6 wraps. All in all I like it but I agree with the Aromamiser being better on flavour.