I’m looking at getting another RBA for bigger coil builds that matches or out runs my goon 24mm deck. Any thoughts would be great. Currently just built a dual 3.5 mm parallel with 24 guage so it has to fit larger builds. Also looking for maybe a 4 post with large screws and deep reservoir. Thinking of getting the Smok G Priv 2 to match my Alien. Any thoughts on this as well would be great.

Did u have a size in mind?


great bottom airflow, virtually impossible to leak but it has its flaws as does every piece of gear.

I picked up a ridiculous Gear RDA off ebay. Side adjust bottom airflow. The orings are single and very small, but it's basically a Ginny tank made of metal. So far it hits SUPER hard. 10.5 wraps of 20ga Ti on 3.5mm with hemp wick on my supermodel Efusion duo. 133W seems sufficient. It's a hardcore RDA, best flavor I have gotten from anything and the wick isnt even broken in. The edges are super sharp and you need a better screwdriver than it comes with, but otherwise I'm quite pleased. H…

How about the Grim Green Recoil or Recoil Rebel?

If you don’t mind going single coil, this one’s built for some large scale coils,

HellVape Dead Rabbit – Tell Me About the Rabbits George Reviews

They’re dead Lenny now STFU. [Hellvape_Dead_Rabbit_RDA_01] Packaging: Well the Dead Rabbit box in an interesting colour choice a drab green but do we care about it nope - I personally couldn’t care if it came wrapped in in an old sock as long as it protects the contents during shipping which this one did. What’s in the box: Well the rda of course, a goodie bag with some spare o rings a couple of hex keys, spare grub screws, a bf pin, a 510 adaptor, a 810 drip tip - pretty much you standard …

http://mojo-vapes.com/x1-30mm-black-chrome.html
$26 for a RDA that’s built like a tank and with big builds absolutely shines! Good flavor and clouds.

Aside from the Cigreen Gear mentioned above, Fogwind atomizers are outstanding for flavor, vapor, and draw. I have an Alliance v2 and a 30mm Ally. The Gear is above the Alliance, but the Ally is ridiculous. You need a 3 cell mod, preferably LiPo to run the Gear and Ally optimally imho. I use all three regularly.

The Recoil at least got a smaller deck than the Goon and i am not sure how the new Recoil Rebel is and if the deck got the same size. So i would say for big ass builds a Recoil is out of the question.

Rebel is way bigger deck than original. 20mm vs 24mm. Grimm took the feedback of small deck and fixed that.

I just ordered myself one of these and still waiting delivery. The thing with this one is that is has a restricted build deck and I doubt it can take the variety of coils that my Goon takes. The Goon build deck really allows for a lot and to trump that, it’s gotta be big. The reason I got this though was for flavor, less leaky than the Goon, the ease of build with a postless style deck, smooth airflow.

I’ve been contemplating whether to get the Aura or the Dead Rabbit, but the Aura lost out on leaking (bottom airflow) and condensation on mod, size of juice well, good but not outstanding flavor, not the smoothest and rather loud airflow.

Lots of reviewers have very little cons for the Dead Rabbit but don’t buy it if you have huge coils in mind. Large ID is no problem but you’re limited by the fixed distance between the positive and negative posts. Especially if you like spaced coils, like I do, this is a limitation.
For anything else, I think this RDA will be enjoyed by many. 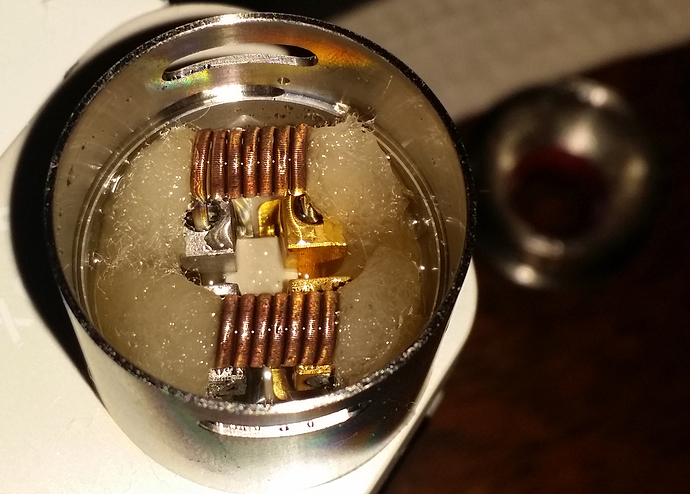 A similar build in my Goon but spaced 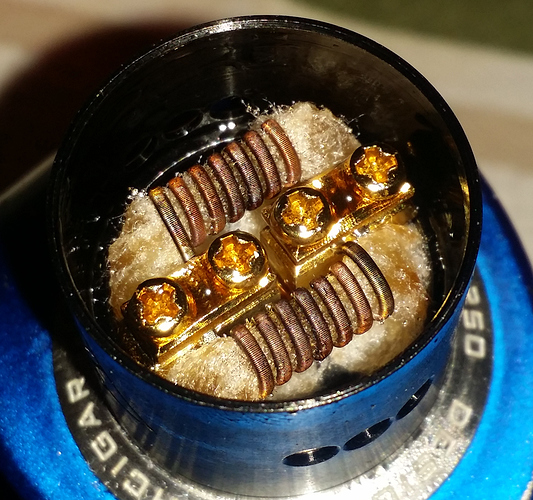 Looks nice and deep. Those coils are about what I run in my Goon at the moment. Thanks for your input it’s greatly appreciated. Still waiting for that G Priv 2 firstly then I will purchase an rda for it then.