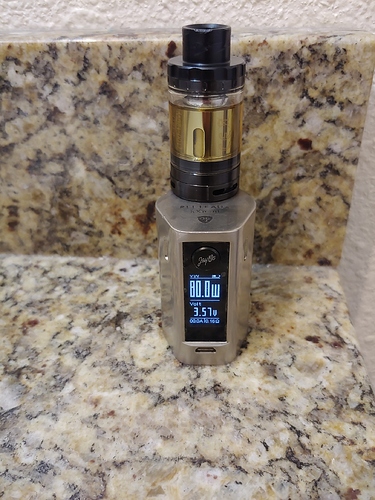 I took it to customer service and let them know it was in a shelf , they said they would just throw it away so i asked if i could take it instead…Funny thing is that they have a Cleito 120 on a 80 watt mod … Ill throw a regular cleito on it with a .4 coil and be happy … If you have ever lost something or found somethimg take a pic tell us your story … Btw anyone like the cleito 120

Lol , Right??? they didnt want anything to do with it , like it was a bomb . I explained someone probably spent 100dollars on the entire thing ( brick and mortar ) pricing of course … I damn sure wasnt gonna see it get tossed …

That p!sses my off that they were gonna throw it away. Not supposed to put any kind of battery in the trash, especially those.

I am still bitter about the set up I " LOST ". The mod wasn’t much to speak of but I had my Recoil and two brand new VTC5A’s. I even go through the house every once in a while " hoping to find it ".

Whoever lost it has got to be quite sad. Imagine going back to walmart hoping someone put it in lost and found and they tell you " oh we threw that away ". I would throw a fit that hasn’t ever been seen before.

let them know it was in a shelf

which Walmart was this?!

Did that customer service person even know what it was? To arbitrarily say it would get thrown away is pretty ignorant. From the looks of the drip tip it appears the owner must have dropped it at some point. That, or he/she’s a beaver!

Lol i explained what it was and the value… Wehad a discussion about vaping etc … Our conversation was more than what i explained… You are right though she was very ingnorant , and from the looks and smell ofnit she is a smoker …

From the looks of the drip tip it appears the owner must have dropped it at some point. That, or he’s a beaver!

[disclaimer] Ladies? these are jokes …except to Debbie …why’d you chew my pen Debbie?

Well walmart does now sell vape equipment and juices. Or at least around here, guess throwing it away would make someone buy their stuff. Sad tho, but at least you got a new toy. Congratulations

Man i knew i was doing it wrong. Maybe people wouldnt constantly take my drip tips if i bite/eat em? I keep that in mind and give it a try

you’re the one that said “Beaver”

[disclaimer] Ladies? these are jokes …

We must be cognizant of our verbiage. Some of the sheep around here are extremely fekkin sensitive.

We must be cognizant of our verbiage.

To clarify i was referring to the those furry mammals with big tails and scary teeth that gnaw timber compulsively to build homes on the river. They look real cute until you actually get close. Attraction aside, beaver make Men do stupid shiite …like this. (you can jump to about to 2:00 mark for the stupidity to begin …horseshoes, hand grenades, and Tannerite apparently).

[Disclaimer] pretty sure no Beaver was harmed in this video (they said). If Testosterone Poisoning, firearms, and Near-Darwin Awards triggers you, type “Kittens” in the YT Search {{{ELR Group Hugs}}} If you are so bold, Watch and LEARN what to NEVER do! Never be cruel to the Beaver! …just keep a respectful distance.

So that’s we’re I left it. Damn

Thanks @fidalgo_vapes but no need! Just was being silly!

I know lol , but i woould have if you wanted …

Thanks for the offer bro! I appreciate your generosity!

Mount Vernon IL? On Davidson road?
Was it filled with liquid amphetamine X CBD and a pinch RSO?

Mount Vernon Wa , and i didnt taste the juice or use the Tank at all , as much as i love the original cleito i hate the 120 , but i wouldnt doubt that it had aomething like that in it lmao

Ah ok, I was just joking anyway. I recently found out that liquid meth can be vaped, from an episode of the show Intervention. Probably a pretty good idea to dump it, last thing you want is a trip to an ER because you inhaled a mystery substance. No doubt it would make an excellent Truth initiative commercial to show the “dangers” of vaping.