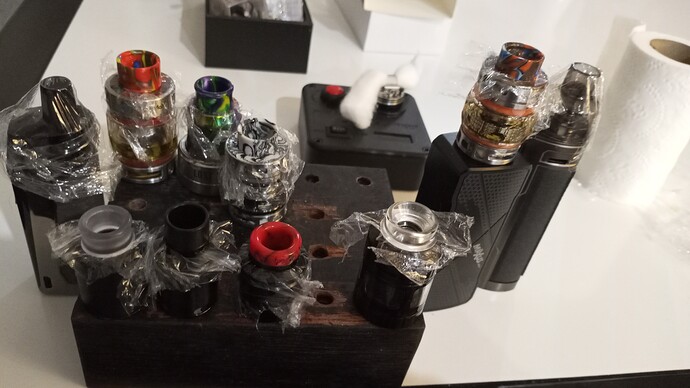 Impressive. I just use my overcoat to clean up any drips: Sometimes it has developed an amazing scent I’d try to turn into a beard wax by when I put it to wash at the end of the day.

get some marbles and put them on the DT. and close the airflow.

Marbles, a cunning idea I haven’t heard before: now pondering trying out some SS balls. Reminds me of putting balls in paint bottles,

i am something of an innovator. i have even put my Dt’s in the dishwasher, yes, it works very well.
but be aware, on a few of them the color faded, i don’t do it any more.

the SS bearings = they are heavy, if one is dropped it may do some damage = i have a glass desktop. ymmv . and marbles look better imho.

I was thinking in a tank. Even though I rarely use tanks.

placing balls in tank in order to encourage better flow.

it is a mad idea but completely sensible to ensure a liquid mixes well and doesn’t stick, would speed up cleaning and be a heat sink.

Meaning fuck yeah!? Or fuck ya…as in fuck you?
And why do you need DT covers? Do you live in Los Angeles?

I live in the North East where the air is crisp and clean… but it does get dang cold here at times…
Now I’m not trying to go all Bernie here, but do they make drip tip mittens

I meant fuck ya! Lol! And I live in Edmonton,alberta, Canada its shitty and cold and rainy and more cold. I also live in a basement apt.just, don’t use half of those and sometimes they sit for days/weeks, without being … Idk I was bored…

Your boredom turned pretty amusing though, in that cute “Can’t believe she’s doing that” kinda way

Edit: it’s actually a pretty good idea though: cling wrap is cheap and disposable and will stop bugs and shit crawling in your coils as well as air.

Vapemail sent: here’s the email vapoureyes spits out with every order that’s done:

"The products you wisely chose were carefully picked from our shelves like delicate berries and placed into a wicker basket lined with the softest rose petals. With the grace of a ballerina, we tiptoed them to our packing station where Santa’s elves, who work for us during their off-season, prepared your order for shipment.

With expert dexterity, each of your items were methodically placed into the shipping box using techniques taught to us by a former Tetris World Champion. Using a pair of fine gold tweezers, we placed dozens of biodegradable packing peanuts (they’re made of corn and dissolve in water, try it) into every available nook and cranny to ensure safe transport across our sunburnt country.

When the elves were satisfied that every gap was filled they played a beautiful tune on a ceremonial lyre, summoning a kaleidoscope of trained butterflies who elegantly arranged themselves on the lid of your parcel, closing it gently. As they carefully positioned the final piece of tape to seal your parcel shut a solemn quietness fell upon the elves, and they arranged themselves into an honour guard as your parcel was passed hand-to-hand down the line to be loaded into the waiting Australia Post truck.

In unision they chanted, “venenya vilyanirwanen ná quanta as angolingwi” — we don’t speak Evlish but we’re told it means “may these vaping supplies bring stability and success to Jason for all eternity.” Wow, we’re getting a little choked up ourselves now. Thanks, elves.

As the truck pulled away, a dozen white doves flitted gracefully through the air and a rare double rainbow formed overhead. That’s when we knew the products we had lovingly curated were on their way to a better home. Please take care of them, Jason; we promise they’ll take care of you."

Shouldn’t such a TLDR be in thread of its own?

Evidently TLDR to you, doesn’t mean TLDR for everyone else.

I just read 82 journals today. So maybe I have a short attention span.

That would probably do it.