It Happening in Canada now #

. Bill S 5 was introduced in the Senate on Mar 9 2017. Details almost identical regulations as the FDA ones. 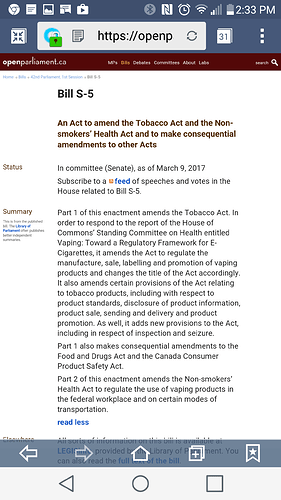 It’s fucking deplorable what they’re doing at the minute. I have a few choice emails to send out tomorrow about the TPD here, which is essentially the same thing. You should contact your elected representatives and tell them exactly how you feel about it and keep on telling the bastards until someone listens. I have a phone appointment to talk to the Speaker of the House of our parliament this week.

TPD gives rights to Corporations so they can sue for losses if a law is passed in any country compromises their profits WTF Now those in Kahoots, obviously big tobacco and pharmaceutical conglomerates, see vaping the same way and are using their vast resources in an attempt to stamp out the actual free market that Vaping created.

That was TTIP, the Transatlantic Trade and Investment Partnership, which has been more or less scrapped now.

Shit, didn’t expect them to move on this until they had finished the tobacco control consultations (which they snuck vaping questions into). That would have given them at least the ability to pretend like people wanted this.

It is not law yet. Even if it passes in the house of commons it will not become law for 180days afterwards. The wording in the bill is what scares me. It states an “inspector” can sieze your car if suspects your vaping supplies are for sale. It says they can enter “ANY” place not just stores but homes. It says they can merely call to obtain a warrant. Then it says up 2 $1,000,000 fine and up to 2 years in jail for violations. Wtf. It says if they seize your car and stuff they can charge you costs incurred to move, store, dispose of your YOUR stuff.

It also clearly states zero nicotine is a tobacco product. Its lists banned flavors ALL sodas, All energy drinks, All desserts! And ALL confectionary flavors are straight up banned. Also additives but the list of additives almost none are actually ever used with the exception of caffiene. 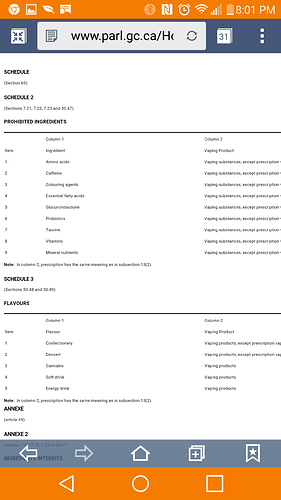 Here’s a link to a video discussing the regulatory framework. Regulator Watch actually has a lot of interesting and informative videos - you may want to watch a lot of them. There’s even a couple where he interviews someone from Health Canada about Bill S-5.

It does not say anywhere in S5 that zero nicotine is a tobacco product. The bill specifically creates and defines a separate set of terms:
“vaping product means
(a) a device that produces emissions in the form of an aerosol and is intended to be brought to the mouth for inhalation of the aerosol;
(b) a device that is designated to be a vaping product by the regulations;
© a part that may be used with those devices; and
(d) a substance or mixture of substances, whether or not it contains nicotine, that is intended for use with those devices to produce emissions.
It does not include devices and substances or mixtures of substances that are excluded by the regulations, tobacco products or their accessories.”

The bold above is my own emphasis. It literally states in the definition that whether or not it contains nicotine, it’s a vaping product… and that tobacco is not a vaping product.

Your concerns about them being able to take your gear, enter your car, home, etc. are valid, but I believe that those were addressed in another thread you’ve posted to about this topic.

Regarding flavours: those schedules refer to “an indication or illustration, including a brand element, that could cause a person to believe that the product is flavoured if there are reasonable grounds to believe that the indication or illustration could be appealing to young persons.” Meaning, if something’s called “Banana Cream Pie”, has a picture of a banana cream pie, or your brand name is “Vape Some Pie” - that’s illegal. You can’t sell it or promote it. If you call it “Some Yellow Stuff”, the image is of a yellow question mark, and your brand is “Flavour Mysteries” it can still taste like a banana cream pie, you can sell it, and you can promote it.

Personally I think it’s a stupid rule, but it does not actually go as far as banning the flavours.

I’m honestly more concerned about the bit about “no comparisons”. In no way, shape, or form will a vape shop be able to say that vaping is safer than smoking, that vaping doesn’t contain smoke, or point out that even if there are certain chemicals in vapour that they are significantly less than that in cigarettes (for example, diacetyl). I’d love to see that bit removed before this bill gets Royal Assent.

Thats the same way i understood it when i read the summary, its nit great but its better than what the inital talk sounded like. Be a interesting year or so while they go threw the motions n such

Yeah, should be interesting to see what the final bill looks like. I think the best part (and least likely to change) is that they’ve specifically called out vaping products as being different than tobacco products.

I tried explaining the proposed flavour rules to my ten year old son. In his words: “That’s stupid, mom.” He also points out that if we can’t call a thing what it is, people with allergies won’t know to avoid it. I’m a fan of not passing anything a ten-year-old can refute with reasonable health concerns.

On a personal note, I’m getting so tired of this “think of the children” bullsh!t that governments and public health keep going on about regarding vaping. Don’t get me wrong - I support banning sales to children. But I switched to vaping because I thought of my child and how much my smoking was affecting him, and how much more it would affect him if I wound up getting cancer or emphysema, or any other smoking related disease. I really wish that the government would “think of the children” from a different perspective for once. Finding a flavour to start a vaping journey with is tough enough - it’ll only be harder when all of the names are abstract.

Ya its still not great , and will lead to alot of wasted money by people trying to find the flavors they like (unless they make their own)
I just hope they dont ban the sale of liquid nicotine

And ya honestly mc donalds is the worst
"Happy meal " like really … That is a bigger danger to our children than vaping.
Its common sence not to sell to minors , to keep behind the counter, to have child proof caps , to keep out of reach when home, what the hell does it matter what its called…
But thats the gov for ya
All worried about making dollars
They forget about sence

I’ve said it before and I’ll repeat it again. You all need to be putting everything you’re talking about in here into an email and sending it off to your elected representatives.
@Kronix you can be damn sure that liquid nic will be in the firing line very soon too.

Thank you for making things more clear. I read the bill fighting exhaustion last night and may have misread the legal jargon. I understand now the category system and 0mg being a vaping product not a tobacco product.