That shouldn’t be a thing at all.

Editing removes typos and spelling mistakes and generally serves no other purpose: certainly no nefarious purpose.

Limiting the number of new posts in a given stretch of time - that’s something that serves a clear function - since it stops spamming - but having a limit set on edits to an existing post, that shit’s gotta be turned off.

What function does it serve to stop people fixing errors, bad grammar and typos in posts? 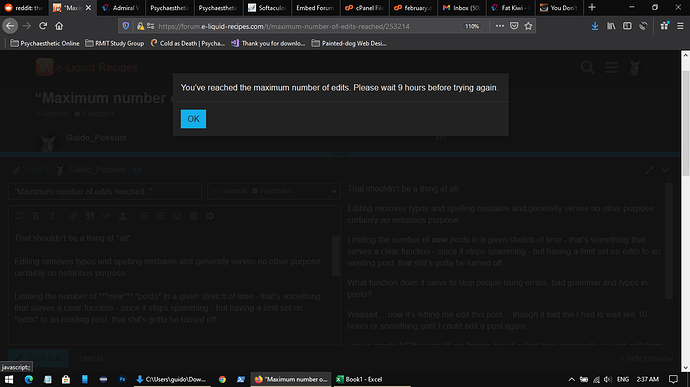 See… that’s not even a security feature: I can still create all the new posts I like apparently, but cannot edit the errors out the ones that’re already there…

I don’t have time to wait 'cause some stupid script tells me to… we could all be dead in 9 hours time.

There, fixed it for you.

It’s, doing it again though while I"m editing my Elephant Spunk code example

when typing, does whatever you use NOT underline misspelled words ?

It does, but I’m usually using my phone and it’s autopredict frequently inserts the wrong word on me, which I usually don’t spot until I’ve tapped Reply

i am on a desktop, 24" screen. see if you can turn off the word/spell check. a misspelled word is way better than the wrong word.

I wish I could reset the phones autopredict but don’t want to have to wipe my entire phone or factory reset just for that.

well, good luck with that

I’m with you on the autopredict on phones. Because of it I’ve sent some…well let’s just say I’ve sent some inappropriate texts to some folks. The embarrassment that followed was genuine. Even without autopredict issues, I’ve sent the wrong text to the wrong person while engaged in simultaneous text conversations. Was especially awkward with my boss getting a very inappropriate text from me. She has been kind enough to have never brought it up. And believe me, it was BAD. My boss gained a lot of respect because she knew it was a mistake and just let it slide. Years later, she is no longer my boss, but is a friend.