So I got bored yesterday (flavor chasing) and decided to try to put mint and menthol in a couple of cinnamon and chocolate recipes to see what happens. One of them was a chocolate mint anyway and I figured I would get away with that

The cinnamon recipe was kind of like a fire and ice type of experiment. I haven’t vaped it yet because I want to let it steep.

I would be curious as to know what non-fruit recipes anyone has had any luck putting menthol or mint in that they thought was kind of fun?

Hic has an Andes mint recpie. And really I think any chocolate recpie you can add a bit of mint to to add. Which was good when I tried it. Recpie is posted on VU.

There was a vanilla mint recpie I tried…it was ok, but I have issues tasting vanilla. Like I love simple creamy vanilla, but the vanilla never seems to hit right. Stil working in it. I found that I need to age the mix just like a custard to get the best repeatable result. Mix one was weak, mix two was almost perfect, mix three added cheesecake v2 cap and sucked, waiting another week for remix of the second.

Thanks for that! I have chocolates coming in the mail!

I put creams and custard in my strawberry and peach menthol’s and it works really well, it smooths it out and it’s a real complex, satisfying vape.

I’m kind of wondering if anyone has added menthol/mint to anything almost bakery-ish (or other drink vape odd thing) and had any success with it? (I know people probably want to just say - "try it dummy and see what happens lol)

Funny you asked, I have this planned to test @Maureeenie, 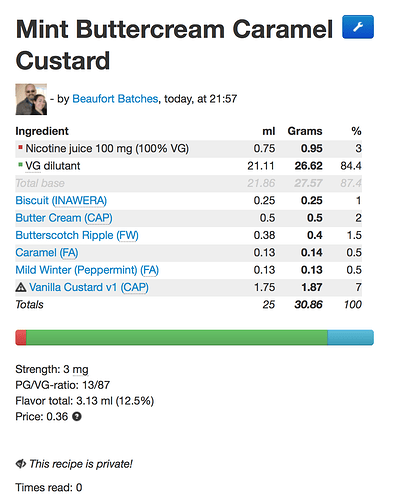 BTW, this is not being made for myself. I was challenged to make a unique custard. Custards are not my staple and especially CAP, much unlike many others…

Oh my, that looks fun!

Bookmarked!
Looking forward to trying that out!

I’ve added a few drops of Natural Mint Inawera to my cherry iced tea, the drinking kind, lol. It was very nice. I might try to reproduce this as a vape flavor when I get more time. It makes sense to try since a lot of my favorite teas have minty notes.

feel like a broken record trying to sell my wares the amount of times I’ve posted this recipe lol, but this is always in my rotation and I sell it to most of my 'customers’
I vaped this almost exclusively for a year, actually this is a tamed down version of it, it’s amazing how much menthol you can get used to lol

I actually copied that recipe and it’s on my list! LOVE this one when my throat is scratchy due to a cedar allergy.
It’s addicting… I’ve never tried the Eucalyptus… I know what it does in a cough drop is it a flavor more than a feeling thing?

To me it is flavor more than feeler.

Not a huge fan of mint, but I’ve used it in mint tea and in a mint chocolate chip ice cream. I have FW Spearmint and I like it a lot. And Flavorah’s creme de menthe. And RF Shamrock shake. That’s about as minty as I get, usually.

every few days I will also mix peppermint with strawberry ripe, strawberry sweet, and lemon sicily

I’m a huge fan of peppermint. I like it in almost all of my recipes

Okay so I’ve discontinued smoking cigarettes for two months now. The only vape that got me this far was the name brand “FIN” and I was using the “cool menthol” flavor. Recently my local area hasn’t been selling the juice nor the electronic cigarettes which means I’m having to have an imagination and play with flavors. I noticed the back of the fin box had ingredients that read “creme de menthe, peppermint, and vanillin. I have yet to find any other vape with the exact taste. The only one close to it was called diamond ice. I actually ordered custom vape juice off of www.thevapemall.com. They are AMAZING. You can either order the do it yourself supplies or go to custom ejuice and add up to 5-7 flavors? I decided at first because I didn’t know if they were good being a first time customer to try their sample pack which you choose your flavors, and you can add custom flavor that they will mix. They will also ask if you would like to add extra flavor, you choose the amount of VG/PG, Nicotine, so I ordered creme de menthe, vanillin, they mixed it, and then I ordered vanillin, creme de menthe, peppermint, and spearmint. I would recommend the site considering fast shipping, they always have great prices, and following them on social media will benefit you because they are always putting promo codes and discounts on their social media. My fiance is obsessed with “purple drank” by the name brand “bigfndeal” and I noticed their site literally has every flavor that the big expensive brands have and ordered their “grape soda”” vape juice for
him and it tasted identical to what he was paying $25 for and we paid only $12 for it on their site However now and totally freaking out. I bought the fin cool mint prefilled tanks at Walmart and emptied the liquid into my smok tank but the last three months that hasn’t been an option. Anyone have any suggestions?

Anyone have any suggestions?

Yes, start buying Flavor West, TFA, and Capella. Because that’s the majority of what they use for flavor vendors. They don’t even change the name of the flavor in most cases.

By the way, you sound like a paid advertisement for them. Especially when you say:

I really like the lady (one of the co-owners) there, as she’s both very friendly, was quite frank about which brands were which (when I asked directly), which is something most shops won’t do, because they think they can keep you locked in as a customer if they keep you in the dark… AND they sell raw flavors over the counter (also something most vape shops don’t do), so they’re in full support of DIY!! All are things I very highly respect! It makes it very convenient (if you’re close, and in need of a ‘run of the mill’ flavor). But, their selection is limited (by comparison), as they don’t keep a variety of brands, in the same flavor (EG: TFA apple pie and Cap apple pie). They only sell what they use to mix with in house. Totally understandable of course, but limiting as a mixer (in our situation).

If they mixed you something that you liked (via your described “mix and match mixing service”), then I’d ask about which flavors and brand each flavor was so you can buy your own. (Don’t ask what percentage, as that would be rude, and frankly, that’s your obligation to find out -not trying to be rude, but that’s just the truth of things in regards to DIY. Besides, you can come here for those suggestions should you need to.)

Lastly, welcome to ELR!
I hope you enjoy your stay, as there’s a ton to read and learn!