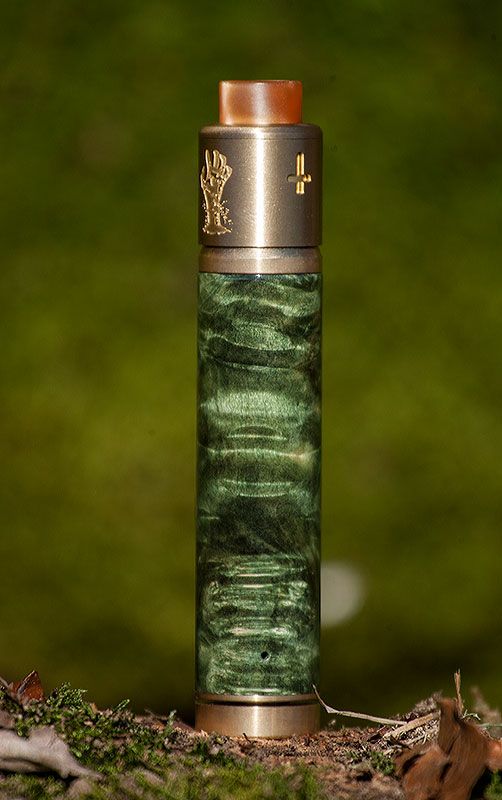 Here is a review on a tube I got back in December 2016. As usual regardless if I bought it or it was given to me I will give you my honest opinion about the object at hand.

So I went for a green stab wood tube only because I liked how the green looked and since I am totally partial I will say it looks amazing. 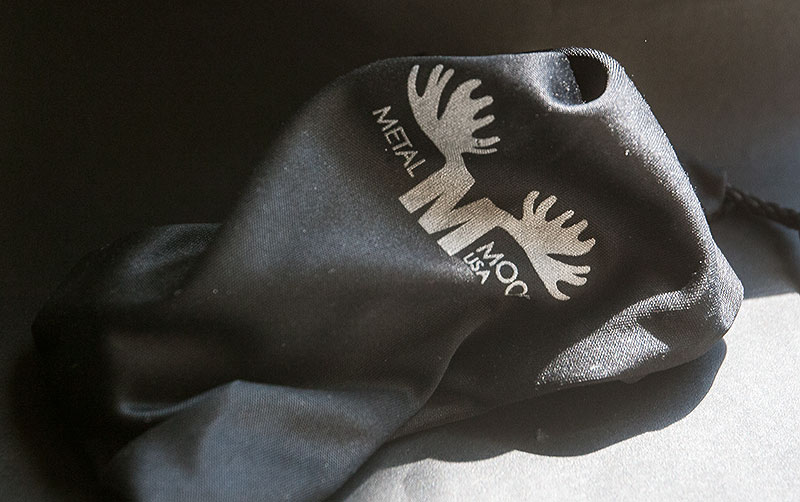 As many other American things like the Goon, it comes in a satin pouch which to me seems a bit cheap considering how much you end up paying for a kit like this. From a price point it is high end for sure. I could probably get 2-3 decent mech tubes for the price I paid for this one and those 2-3 mechs would probably give me a equally satisfying vape. 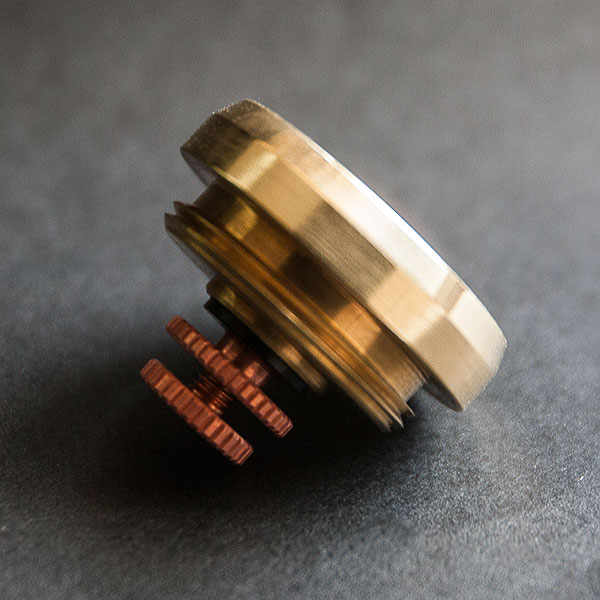 It has a 510 connection cap and it is no problem what so ever to adjust for battery rattle and still have everything tight without any gaps between the top cap and the tube or the switch and the tube. 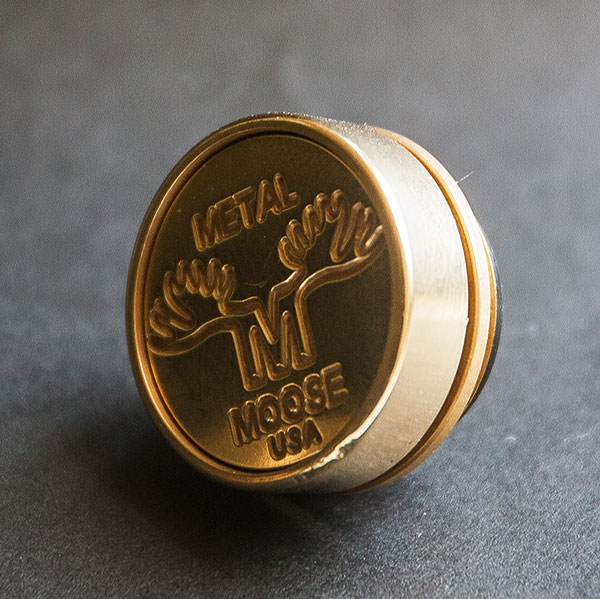 The throw on this mech is very short. It has almost no travel at all, i measured it at less than 1mm and a throw that short is short for any mech in my experience. This can actually cause an issue if you want to have the battery venting holes at the bottom and the positive side of the battery downwards. If you do that it will auto fire and it doesn’t stop until you take the battery out. Conversely the short throw is absolutely the best throw I had in a mechanical mod ever! Aside from the look of this mech the throw is what I love the most about it. 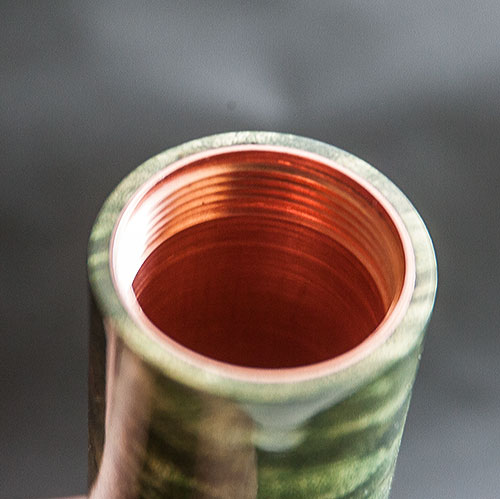 The machining is overall good and the threads are pretty clean, there is one thread that is a bit sharp but it is on the lock ring on the switch, so because of where it is it doesn’t bother me that much. Something I would have wanted however is a bit tighter threading, as it is now the lock ring on the switch kinda wobbles a fair bit when it isn’t at its end location. This is something that bugs me a little. 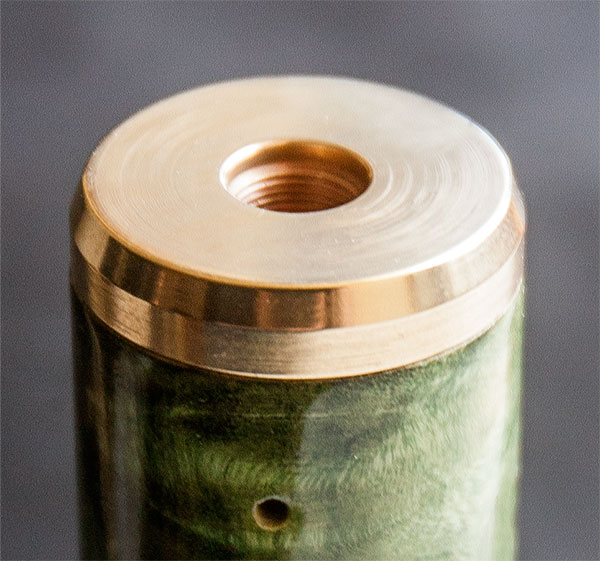 People with OCD will have a problem with how the tube meets the top cap and the switch since it isn’t flush. There is an edge of the tube that sticks out and honestly it bothers me as well. It tells me that the quality control at Metal Moose isn’t as good as it really should be considering yet again the price tag on this mech. Would have been fairly easy at the time of production to actually make the tube 24mm with the clear coat on.

All in all this is a really nice mechanical mod, it looks good, it does what it is supposed to do and it hits fairly hard. I’m sure it would hit a little better if all the parts were made of copper but all in all its working well and I didn’t want copper top cap or switch.

Cons
The price
The machining
The thing that the tube isn’t flush with the top cap and switch. Its over 24mm.
Quality Control

With the pros and cons lined up would I recommend others to buy a Metal Moose. Sure thing if they have the cash and want a mod that doesn’t look like everybody else’s. It is unique and I guess that is a big selling point.
But I really would like the people at Metal Moose to increase the quality control in order to make sure they don’t let a mod like mine slip out the doors to a new owner. A 24mm tube mod should actually be 24mm and all parts as top cap tube and switch should all line up without anything sticking out anywhere.

As an end note I can say this, if I ever go for another high end expensive stab wood mechanical mod I will look at it with critical eyes and not accept the tiny flaws this one has.

Since i wrote this review i have learned that the owner of Metal Moose has allegedly been ripping people off getting the money but never delivering the mods. The affected vendors seem to be Japanese. I can therefore not recommend anyone to buy a mod from this company.

Nice one brother excellent pictures and very informative and honest.

Thanks bro much appreciated

Great review! Thanks for sharing.

Thanks bro, glad you liked it.

Thanks bro, i appreciate you commenting on it.

Very nice! I haven’t ventured into mechs yet but I like the look of this.

Thanks Dear glad you like it. Mechs is all i use these days with RDA’s.

As pretty as it is, I think the “not flush” part would bug me a lot. It would even on a cheap mod. And I am not really OCD XD .
Other people might not mind too much though, I mean the tube itself is stunning enough to distract from that.

Thanks for your comment. Have been considering putting it in a lathe and take away what needs to be taken away so everything is flush. Just sucks that i as a customer must do the job Metal Moose should have done in the first place.

Excellent information and great pics.
Like VapeyMama, I haven’t ventured into mechs yet, but this one is beautiful.

You didn’t mention the price, which makes me not want to go look. (You know that old saying… “If you have to ask, you can’t afford it.”) And if that’s the case, I’m with (or beyond) you. I’d be PISSED if they released anything less than premium quality, if they’re going to charge a premium price. So kudos on your kind restraint. I’d have been far less kind.

But I’m the type of personality where the whole “it’s different from everyone else’s” thing doesn’t mean shit to me. And IMO, the only reason(s) to buy any device, is performance and quality of build.

I hope they take your advice, and focus a bit more on QC.

Thanks bro for your comment and opinions, much appreciated.
Price right now on the site with no mods available since all is sold out $300.

Great Review. However I will not be buying one. Yes I am one of those people that the tube not being flush would bug the shit outta me.
I wouldn’t know that were it not for your review. So Thanks for your review.

Thanks bro i appreciate that

It is very beautiful but HOLY MOLY!

Love the look of that thing man, brilliant review fella

Thanks guys, totally appreciate your comments