A new, more deadly drug has been detected in Seattle

SEATTLE (KOMO) -- Right in the midst of the opioid crisis, another illicit drug has hit the streets of Seattle. Experts say it's more potent and deadly than other opiods. The DEA says carfentanil is 10,000 times more potent than morphine and 100...

If this it true …

The DEA says carfentanil is 10,000 times more potent than morphine and 100 times stronger than fentanyl.

That’s not going to end well.

not it isnt… and I have never heard of this, yet they say it came from China via the east coast

Nothing new about Carfentanil (sometimes improperly spelled Carfentanyl) at all. It replaced Etorphine a few years ago as the item of choice to drop Elephants. It has killed (probably, it looks like) in excess of 1,000 people in the US and UK (and possibly EU - verification not found) over the last few years (since ~2016).

(2018):
“A Series of Deaths Involving Carfentanil in the UK and Associated Post-mortem Blood Concentrations”

It has been claimed that some minute amount of it was identified in the contents of a discarded syringe. It is not easy (or necessarily very reliable) to test for Carfentanil (and differentiate its molecular structure from Fentanyl and a number of very closely related analogs). Likely because not very much of it (not to say none whatsoever) has been identified in the Seattle area, KOMO TV News (a very lame and politically biased and conglomerate controlled organization) is hoping to generate unwarranted panic (clicks, ad-revenues,hoped-for praise). That is not very hard to accomplish these days at all - when very few people appear to analyze or scrutinize subjects of media content - instead simply repeating whatever (alleged) information accosts their senses in any manner from any source. Note: this is exactly how CDC manages to deceive the public.

It replaced Etorphine a few years ago as the item of choice to drop Elephants. It has killed (probably, it looks like) over 1,000 people in the US and UK over the last few years time.

Still shaking my head. Feel free to correct me, but, ummmm, I thought the “Business Model” was make it just strong enough to hook’m, then keep’m on the hook, and bingo, long time customers, right ?

doffs tinfoil hat
“Ackschoolie…”
Seriously though: if the stuff is coming from Chinese sources, could this potentially be a form of sabotage? Since the gov’t there has been getting a LOT of exposure vis a vie their handling of Hong Kong? Or is this just simply greed pushed a little too far?

removes tinfoil hat and hands it to the room

Wait! Kids are dying from carfentanil?
They should ban cinnamon!!
Because kids like ice cream.

Instead, “they” are going to ban vaping - based upon DEA anecdotes of Fentanyl(s) appearing in e-juices.

One recent example of “the press” hanging onto every one of any DEA officials’ words (true, or not true):
Brian Besser, the district agent in charge for the DEA in Utah. … Besser read an alarming DEA intelligence report stating fentanyl had been found in unregulated vape cartridges in other areas of the nation. While there haven’t been any reported cases of this in Utah, Besser said it’s only a matter of time. This is extremely concerning, Besser said. “We are starting to see fentanyl make its way into the vaping industry, and we see that we are definitely going to see the death counts go up,” he said.

(Self-reported) data relating to inhalation of (what respondents believed to be) Fentanyl (as well as Heroin) may not be something particularly new - although the occurrence of illicit suppliers covertly slipping Fentanyl into otherwise described products may be a more recent phenomenon:

… their handling of Hong Kong?

All of the Fentanyl(s) preceded the Hong Kong demonstrations. It appears that China may well be a major source. Something like Carfentanil is so extremely potent that it is not only extremely hard and dangerous to deal with in the course of preparing for distribution, it also has to be extremely dangerous to manufacture.

But Big Orange Daddy would not want to interfere with his daughter receiving more TradeMarks in China:
The Guardian (Oct 4, 2019): “Trump promised China US silence on Hong Kong protests during trade talks”

Shit, when I was a teenager we could only get horse tranquilizers.

Why are so many Americans addicted to painkillers anyway? Doctors aren’t supposed to make addicts from their patients (unless they’re terminal perhaps). I remember it already being regulated heavily in the 80’s here.

It was over-prescribed, used long term by patients that required it for their chronic pain, or people just made bad choices if not getting through legal means. I don’t think anyone went into taking those medications with a clear understanding of the withdrawal symptoms after continued use.

I think they have a very complicated sanitary system…

Why are so many Americans addicted to painkillers anyway?

Great question @anon28032772. At first I was just going to slam people for abusing, but in reflection, I think equally responsible are the pharma/doctors like @Silhouette said.

Purdue Pharma, its parent company, and three of its top executives today admitted to understating the risks of addiction to the painkiller.

Seriously though: if the stuff is coming from Chinese sources, could this potentially be a form of sabotage?

That is it exactly sir.

As a recovering addict with 5+ yrs clean (this time and for the rest of time) I have a lot to say on this subject but will limit it to this;

I fell 23 feet, face first, onto a concrete slab and busted my body pretty bad. While in the Hospital I was given morphine injections every 6 min. Not one health profesional told me the dangers. Oh, I thought I knew the dangers but I did not. Needless to say, I came out of the hospital an addict, though I didn’t know that at the time. There is more to the story (maybe I’ll tell it in a vlog) but moving ahead a year and I wanted to stop taking the pills (I was prescribed pain meds after the hospital). My therapy was done and no more surgeries. I called the DR’s office and told them I was an addict and that I would like for them to STOP filling my scripts. Do you think they did? NO, NO THEY DID NOT. I did that for several more months, telling them to stop filling my scripts but they wouldn’t. Finally I flushed them and that was the beginning of my struggle.

The Doctors. They look down on us (addicts) and THEY are the ones that created this whole mess. Them and big Pharma and just like @Silhouette stated…

And you know what’s really nasty about the whole thing?

The treatment medication is far more expensive, and a bazillion times harder to stop. Think 30-60 days of withdrawal instead of 7-10. Also, they still take in money based on your problem. 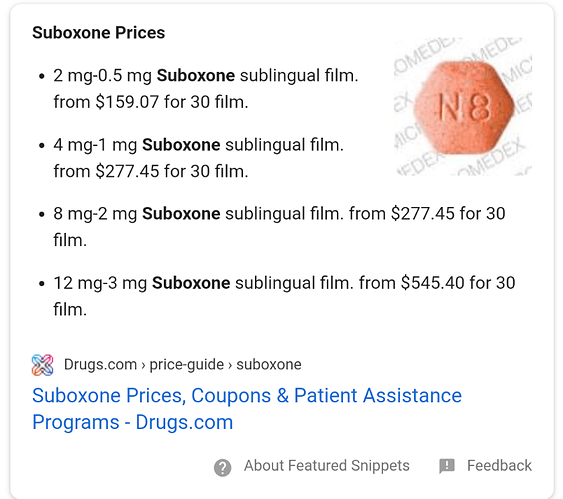