I am looking to find out how you all treat your Nicotine with your mixes…Do you blend it in during the mixing of your recipes and steep it finished (bases, flavors, and nicotine) OR do you mix your bases and flavors and steep them WITHOUT your Nicotine…then add the Nicotine after steeping?..Are there any noticeable differences between these two routines in terms of flavor that anyone has experienced, or experimented with?.. If you wait to mix in your Nicotine until after your base/flavor mix has steeped, do you steep that finished blend for any period of time?

Mine honestly depends on the mix. If i’m mixing a batch that I know is for myself, I typically mix with the NIC and am done with it. If it’s something I know I’m making for multiple people in the same batch, I generally don’t add NIC until I’m bottling for them and just ensure to shake it very well. Haven’t really noticed much difference whatsoever. same as buying zero nic at a vape shop and having them nic it for you before leaving.

I only mix for myself. I add ingredients in the order they’re in on the recipe because I’m scatterbrained and usually doing other things. That makes it easier for me to keep track of what I’m doing. I froth, cap, and put it in the steep box. I usually test the next day or at the quickest in a few hours—after it’s settled a bit. Then test once a week for a month and record thoughts/notes in my recipe spreadsheet. After a month it’s moved to my vaping box and I vape it whenever I feel like it.

Same as Jojo except for the scatter brain. I don’t froth, but I shake.

I know there are plenty of folks who leave out the nic until they vape. But for me with work and being busy that’s too much work for me because all my nic stays in the freezer. I couldn’t imagine pulling out the bottle every two days.

The other part is I love having a different recipie to vape at all times. So I rock a lot of 15ml bottles and 30ml bottles…and I don’t mix above 30mls because it get board after the 25ml mark. I also go to work with three tanks.

@JoJo So do I understand correctly that you mix in your nicotine along with all your base and flavors and steep it all together?

Yes, that is correct. Nic, PG, VG, flavors. I mix by weight and do it all in the bottle at once.

When I was using nicotine, I always added last because:
Needs extra care,gloves, shake and more accurate measurement/attention.
If I spill the mix or mis mix, I’m not out the expensive ingredient.

@Flavor_Alchemist
I add my nicotine last. …BUT…I do it in sequence as to how I want the nicotine to be affected by the heat.
If you have read any of my other jibberish, you know I only stir with a magnetic mixer. [I do use other methods on certain occasions].
All ingredients at room temperature, added together in a beaker, then stirred smoothly until they reach a temperature of 105F to 108F. Smoothly meaning hardly a visible vortex [whichever stir bar you use], and never a frothing of the liquid. Most 60ml batches take about 35-40 minutes of stirring.
I believe that this method blends the ingredients at a more natural level, and I base it not only on experience of blending oils with additives [like VG and flavorings, thick base and small amounts of additives], but the physics between the viscosity of each ingredient.
Why the nicotine last? Because it is heat sensitive, and as the friction raises the temperature…gradually…it not only mixes safely, but more like a colloidal [silver/gold, etc.] will blend in it’s environment. As it will NOT keep its suspension over time like a colloidal, nor will the flavor additives, it has proven to me that it [nic, and the flavor additives] is more easily re-mixed by shaking having used this method at the beginning.

@ozo…then like JoJo…Do I understand correctly then, that you steep your entire finished mix (nicotine included) ?

Yes, when I pour my batch from the beaker that I mixed in, stirred in, it is complete and put in [usually 2oz bottles] the bottles that it ages in, and will dispense from. During the aging process, everything else is a normal function. 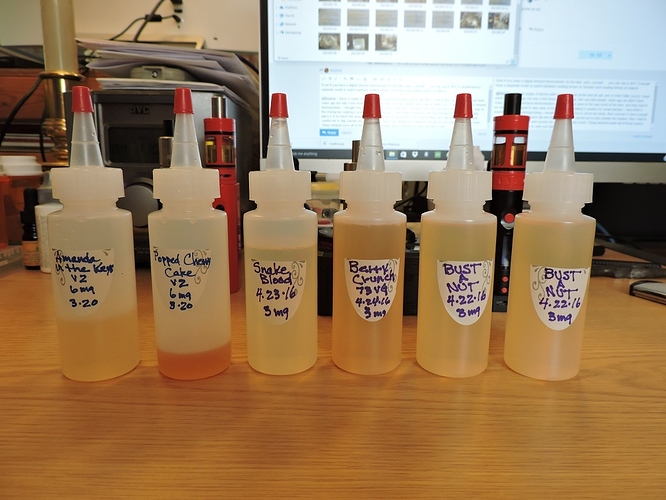 Adding an additional flavor. Yes. And no. It you are doing a dramatic adjustment like let’s say adding obaoba when it wasn’t there…you may need to give it three to four days to do its magic. If you are randomly adding kiwi to your favorite strawberry mix you may need to give it a day or two. If you are just adding more of a flavor that is already in the mix I wait for Atleast over night or until the end of the next business day.

In my experiance you just need to give alittle time to allow the flavor to find its spot in line.

Well, there is kinda two things going on here…If you made the recipe including the nicotine, and then just left it out of the bottle until the end of aging, it probably won’t make much/any difference…unless…the nicotine reacted somehow with a certain flavor and needed to age with it to ‘mellow’ and not be harsh…

The other thing is …if you didn’t calculate the nicotine into the mix, added it later, then it would be like adding another flavor of sorts, and diluting the mix somewhat, then it also would matter which nicotine you used [base, strength, etc].

I believe it is better to age it together.

Gotcha, and I think you are looking at it the same way that I am… given I use EjuiceMeUp for my recipe calculation, then the nicotine would be calculated then put in per the recipe at a later time…My main issue has to do with the question as to whether the Nicotine steeping in the mix from the start imparts any unwanted flavor during a lengthy, say 3-4 week steep or whether it is advisable to steep the base/flavor mix for the lengthy 3-4 week period, and THEN add the Nicotine…

Only one way to find out, if at all possible to the taste buds…do it both ways at the same time.

I would think the added nic at the end of aging would NOT be as smooth simply from it all melding
together, being shaken each day, etc. , not that you may even notice to any degree.

My initial mixing is on a magnetic stirrer, and you can see the 1000’s of minuscule bubbles from it blending [as I am doing as we speak, but you MUST shine a light through the side of the beaker to fully see the action]. Even though the nic will separate while aging, I believe an initial blending using only the heat gradually rising from friction helps the batch stay blended longer. No scientific fact to back it up for e-juice, but for my oil blends and tinctures it certainly makes a difference in less separation. Still no scientific facts, but years of experience. [just a smooth even steady stir as the heat from friction rises from room temperature to about 105F-length of time depends on the viscosity, stir bar size, beaker size, volume, etc]

Make two identical batches, but leave the nic out of one until aged, only way I know to conclude, and it would help if you had a second ‘taster’ for another opinion.

I don’t know how to calculate for this, but if you think there is a way, you can borrow my old calculator from college and try. I have an idea…you could ask Nicotine River in an e-mail. They are very helpful, and would know far more about how and WHY it would blend. Here, try this first… It appears that you work tirelessly in your mixing and I appreciate that…and yeah, the only way to find a difference, if there is one, would be to try the 2 bottle test you mentioned…Doing that math is no problem with EjuiceMeUp, so that is no problem…

My normal protocol is to mix ingresients by weight, froth in bottle…leave uncapped until it re-liquifies…or overnite if I am dealing with flavors with alcohol in them (Flavorah) or high volatile content (FA fruits)…cap then steep for 1 to 3 to 7 or so weeks depending on what I have made fruits/creams/custards and such…I rarely taste test early, as I have a good feeling of the steep requirement…but I do visit them daily or so, to squeeze the bottles, sniff test and shake then re-cap and let go to steep again…

It’s a hell of an affair to mix our own juices, with learning curves and all, but well worth it…as I find myself turning a variety of corners of improvement…

I appreciate your input and fellowship…

Always add the nic at the very end,after the mix has steeped.
I also separate any fruit/ custard mixes.
I will steep the custard part of a mix for the required time.this allows the various creams etc to blend properly, then I will add the fruit part and leave for a further week or so steeping, then the nicotine.
I find that blending this way alleviates any chance of the fruit being outmuscled by the custards, creams etc and gives a nicer overall blend?

I buy premixed Nicotine liquid at 36 MG and cut down with VG until I get to 2 MG.

I don’t add nic until after steep. Some of my juice may sit for 4 to 6 weeks befor I use it. I make my favorites in 240 ml jars. If I added nic when mixing it would be degraded by the time I got to it. I steep, add nic, and use a milk frother to mix.