Youtube reviewers are on a tear designing vape gear, some are admittedly great and some so so. Matt from Suck My Mod has been one of the most active, his latest in collaboration with Wotofo is the Nudge 24mm RDA. I have been using and building on the Nudge RDA for more than a month now courtesy of fine people at www.heavengifts.com 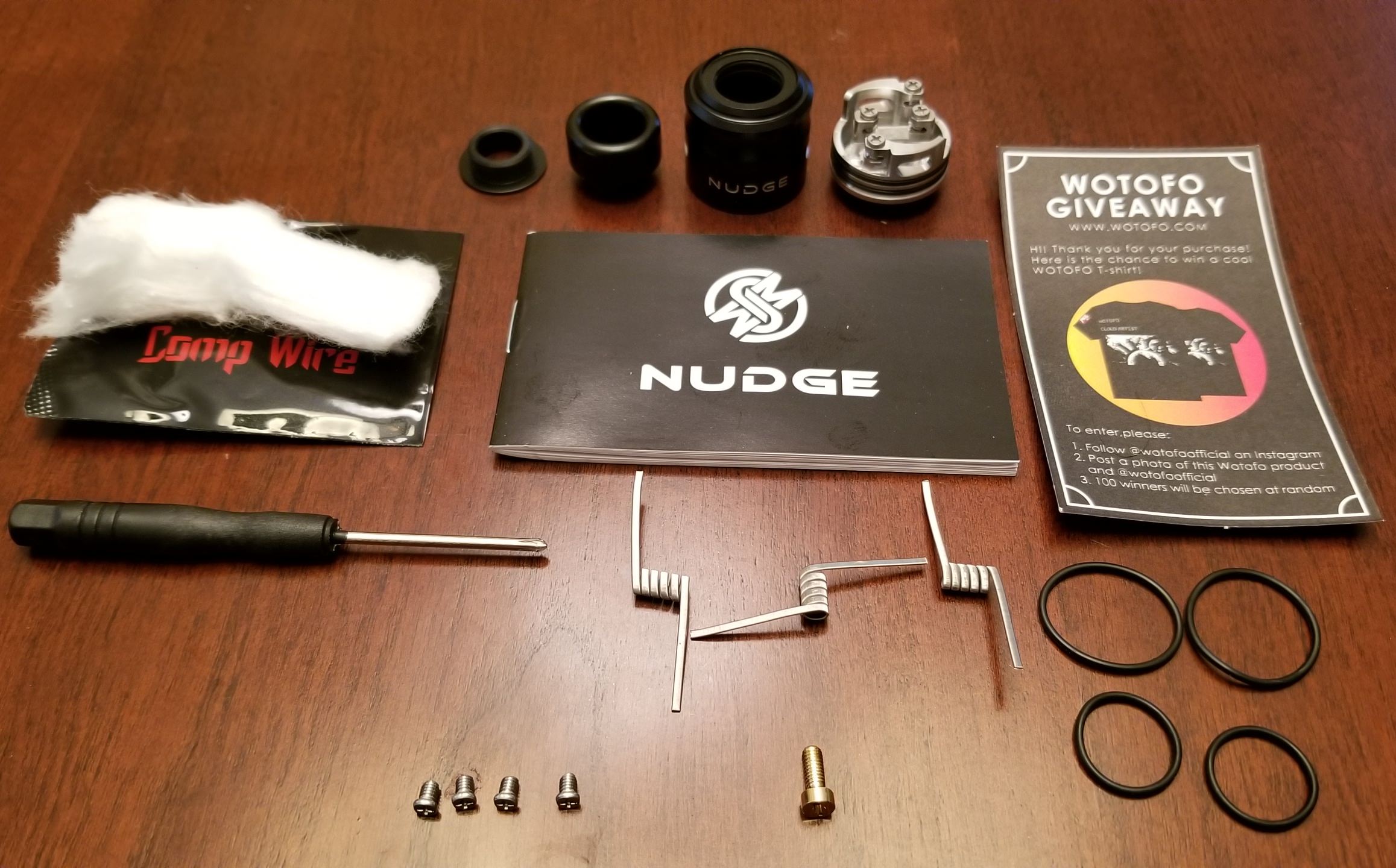 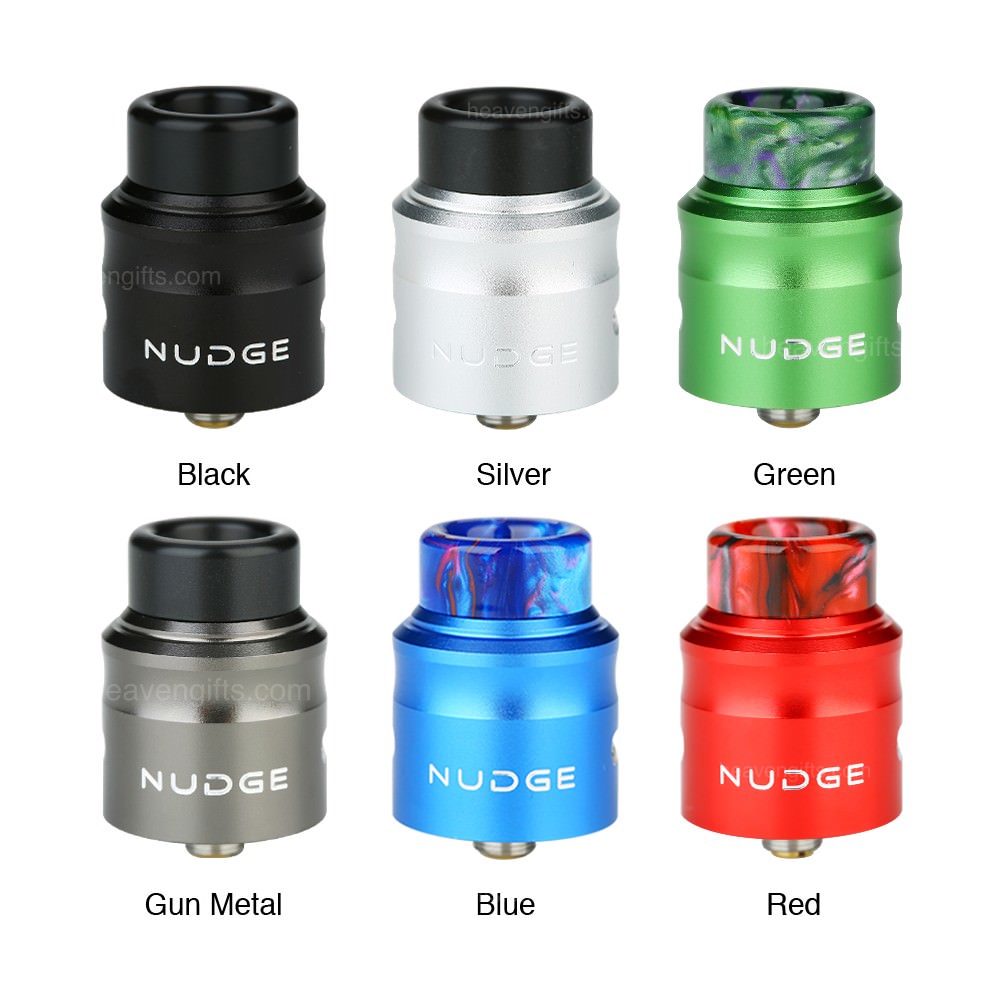 Getting to know the Nudge

I have to admit that I did not know this was co-designed by Suck My Mod’s Matt, on the box there is no mention of it. It wasn’t until I went to check the 510 that I saw the name and that is when I realized the logo on the top cap was the SMM logo, looks nice. The 510 though is definitely not hybrid friendly, in fact it did give me problems connecting to my Therion BF mod, that was the only mod I had problems with it though. 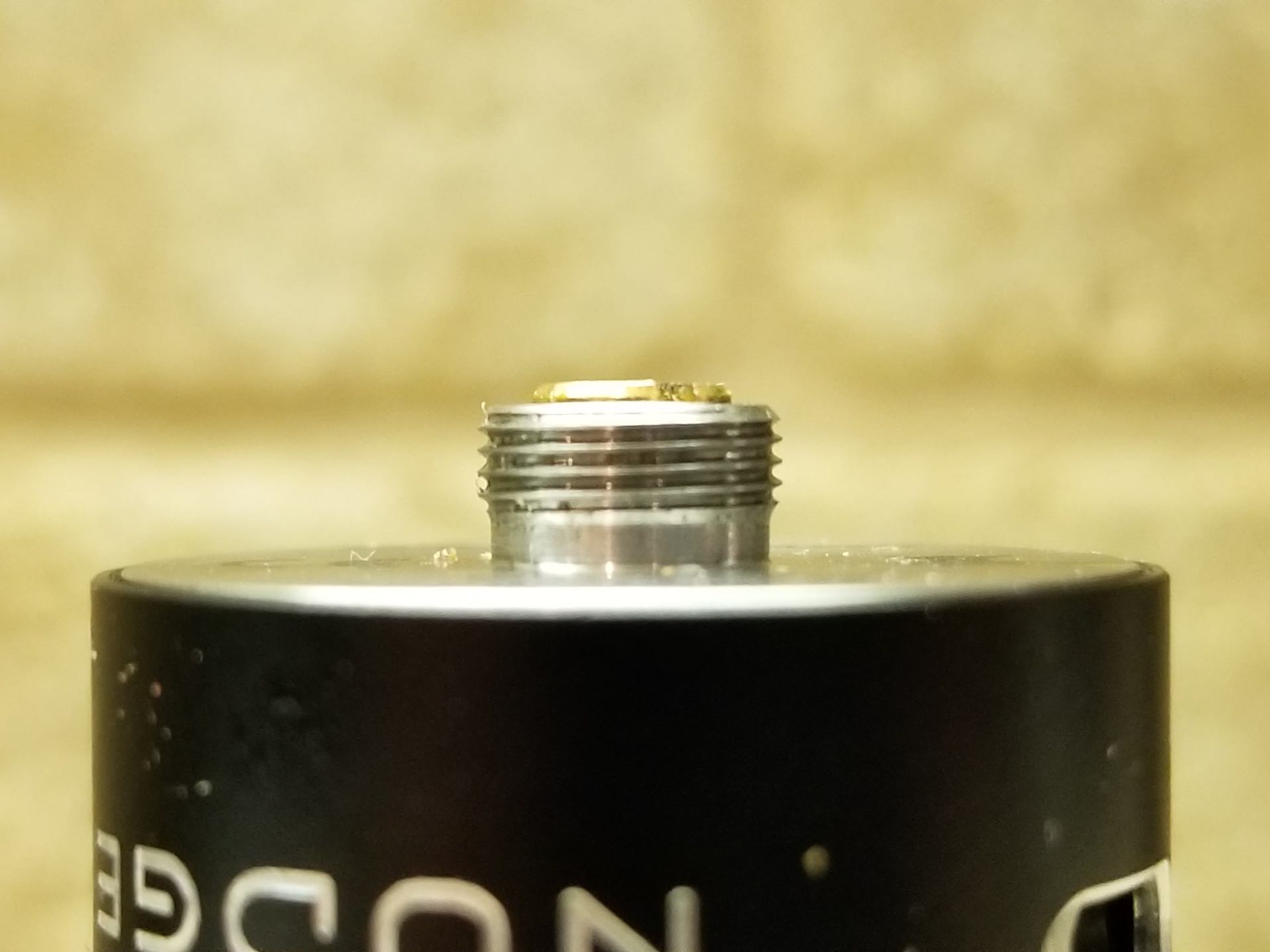 The deck looks nice although a little bit crowded but it does have a 5mm deep well, A little deeper would have been nice though. 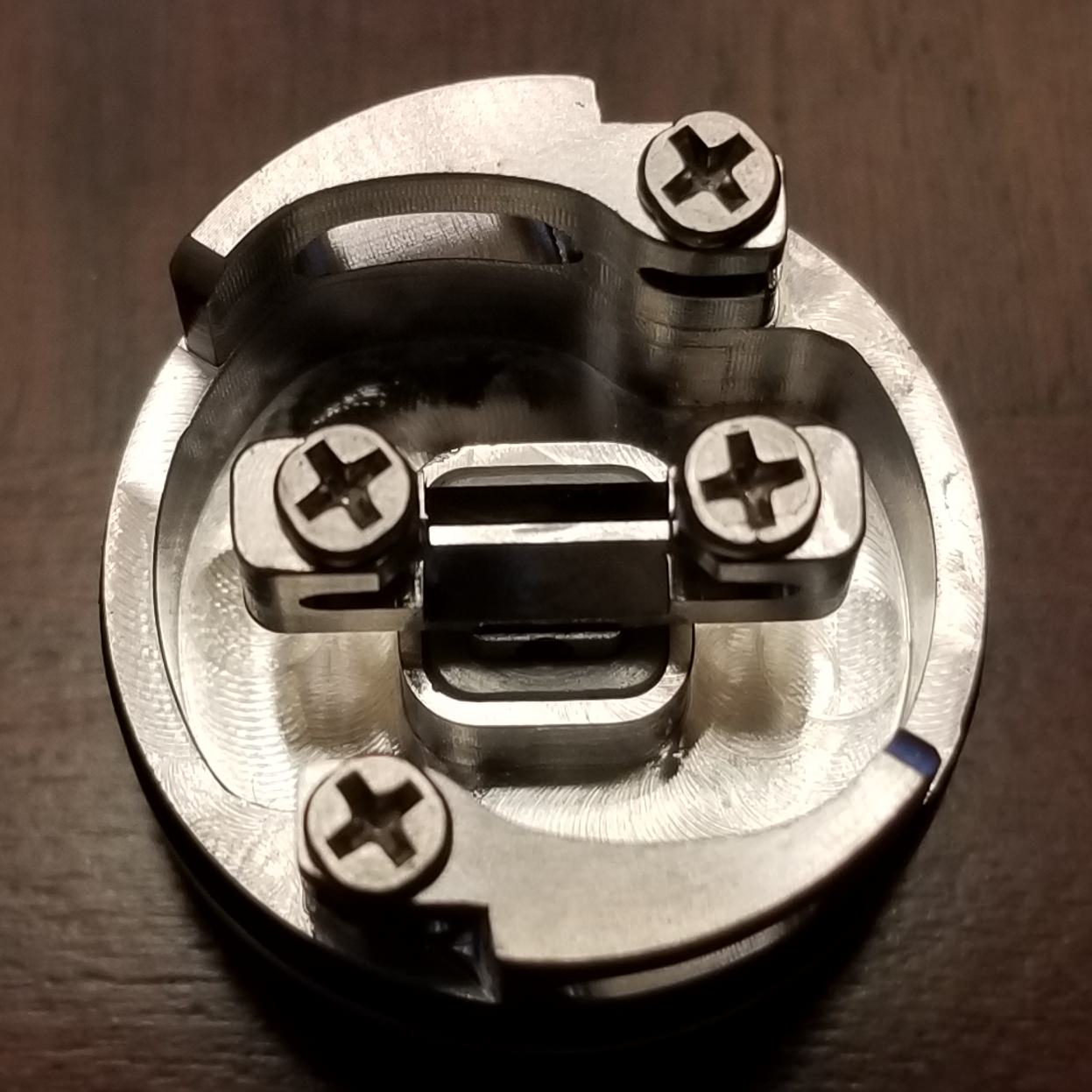 The airflow is big but no angle to it, just straight to the coils. The openings are big enough to take some thick wire. The screws are also excellent, I did about 9 builds and the screws hold up like champs. 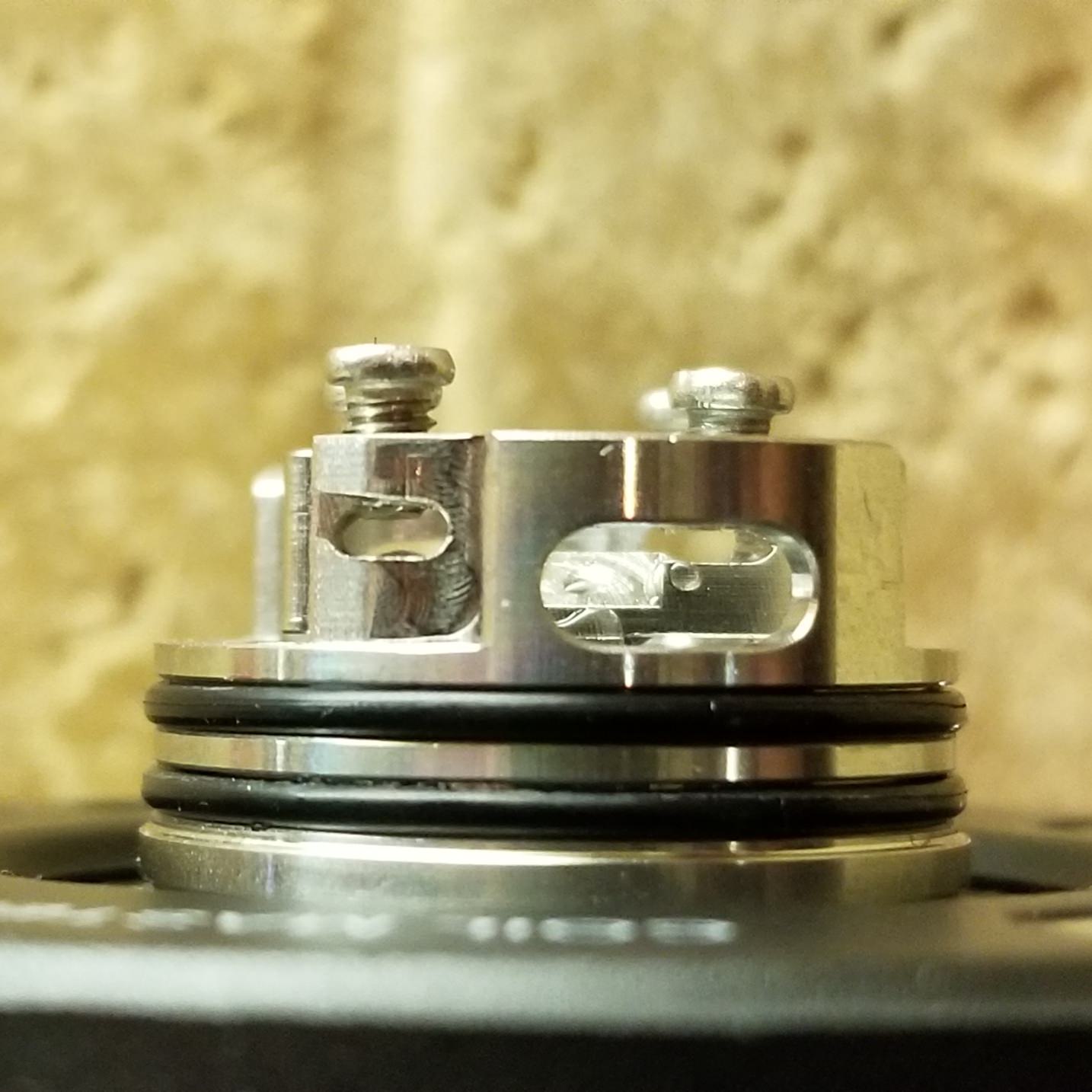 Comes with a optional squonk pin but be warned when you go to swap 510 pins, there is an o’ring and they do not include an extra, if you lose it your screwed. 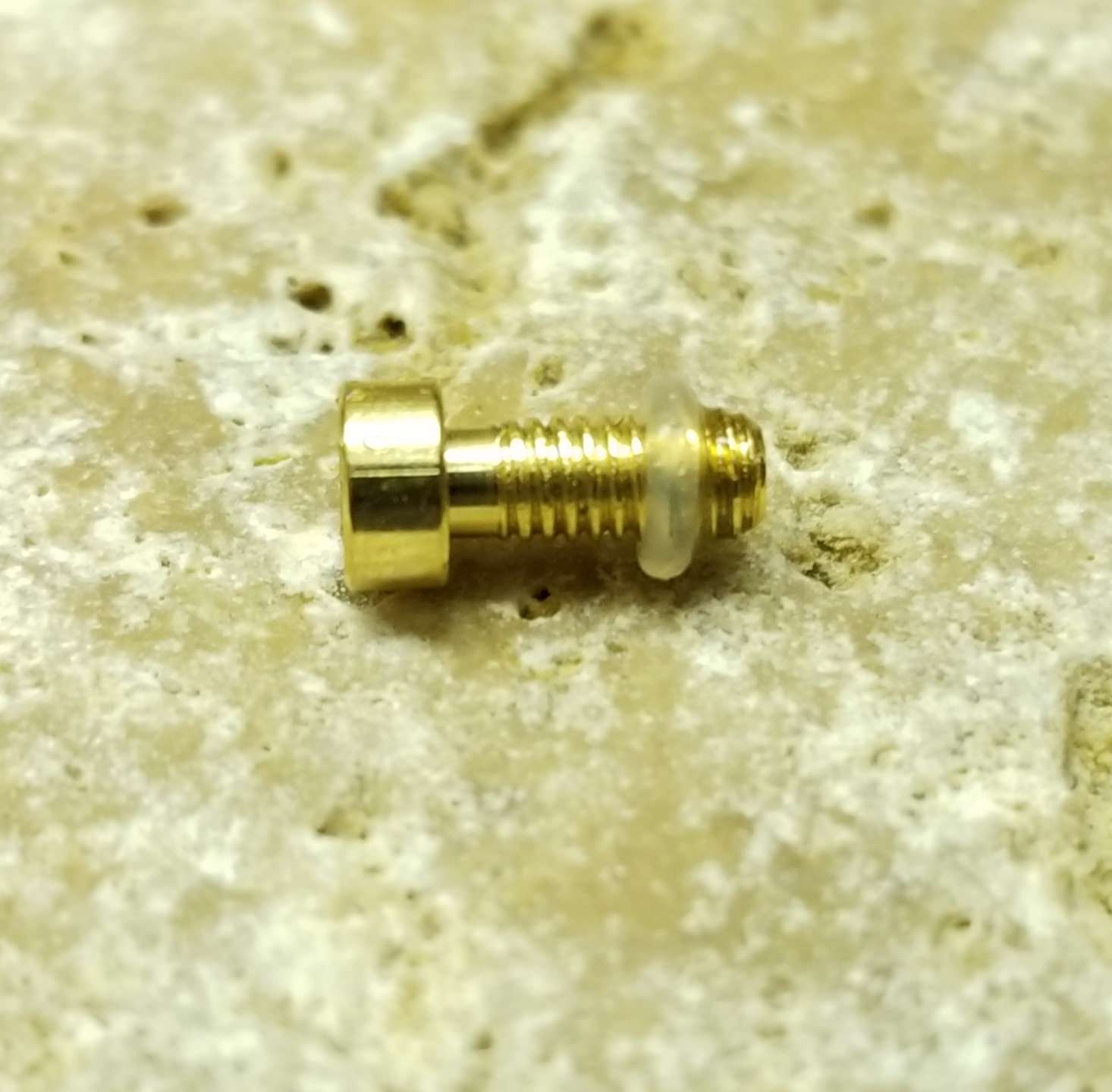 Overall I really like the fit and finish and even though I am not a big fan of aluminum top caps this one doesn’t feel bad at all. The o’rings hold really well but are not too tight, they got them just right. I really like the included drip tip, it is just big enough to keep your lips off the top cap and comfortable to use, definitely not an afterthought and the colored ones look really nice. I have no complaints about the build quality, they did and excellent job on it and after 9 or more builds it is still solid.

Wotofo includes 3 fused claptons which appeared to be of nice quality so I went ahead and installed a pair to start. They also include some Organic Japanese cotton which reminds me of Cotton Bacon, I don’t think it is Cotton Bacon but I went ahead and tried it.
The included coils are wound counterclockwise, this is so the coil sits high in the deck so the airflow comes in from under the coils. 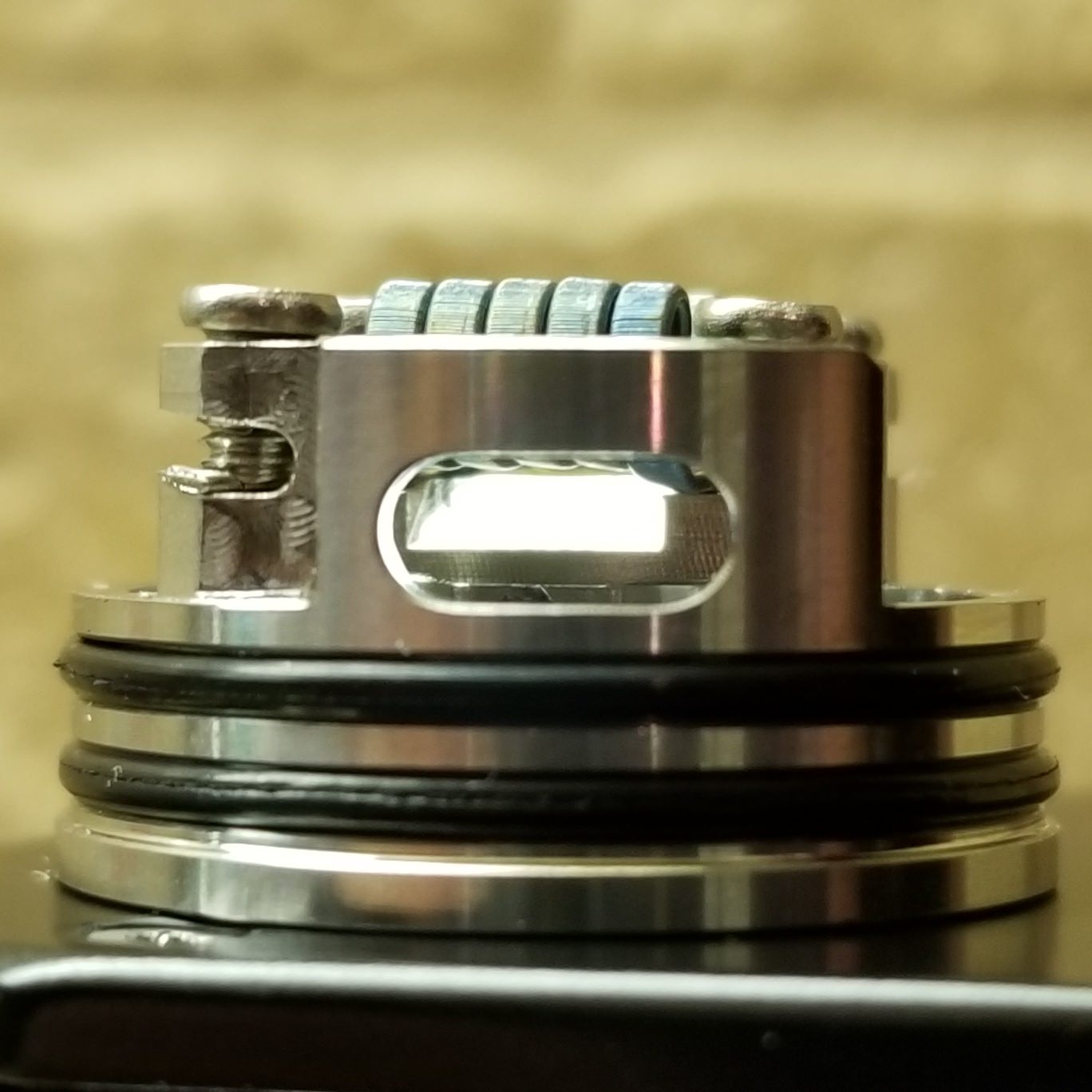 Using that build for a few days really wasn’t giving me the flavor I was expecting, really wasn’t too happy with it. I even went and adjust the coils as much as I could in height to see if that made a difference but just got more of the same. Re-wicked with Cotton Bacon as well but nope, pretty much the same results, the flavor was there but just a little muted compared to other RDA’s I was comparing it too.

I got to thinking maybe the coils were just a little too big in diameter, the included coils used a 3mm post so I decided to use a 2.5mm post and some SS316L fused claptons from advancedvapesupply.com that I am very familiar with and the flavor it produces. Of course I completely forgot to wind my coils counterclockwise, wound them the normal way but it still works and let me try a different configuration. 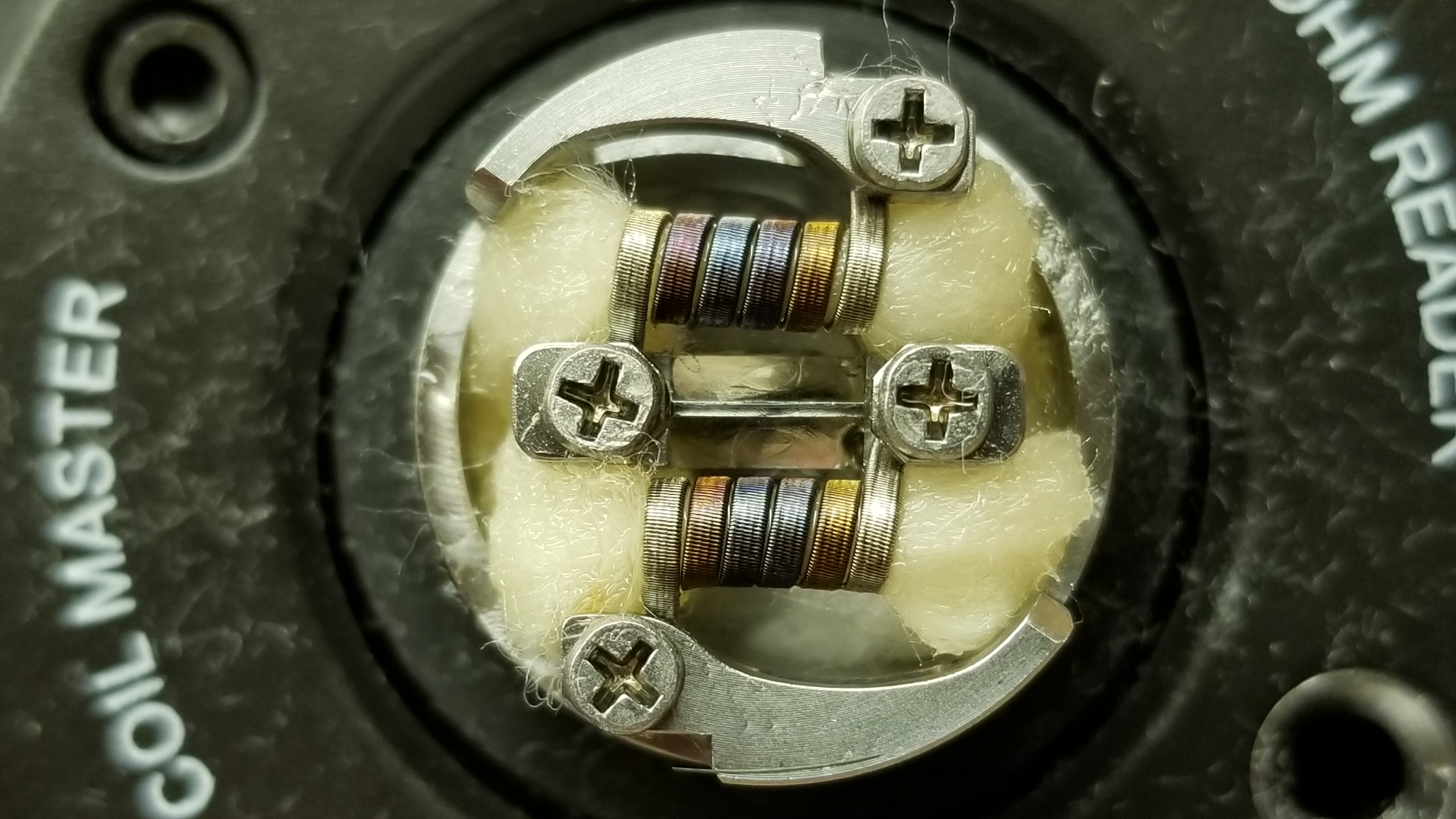 Airflow was still coming from under the coils 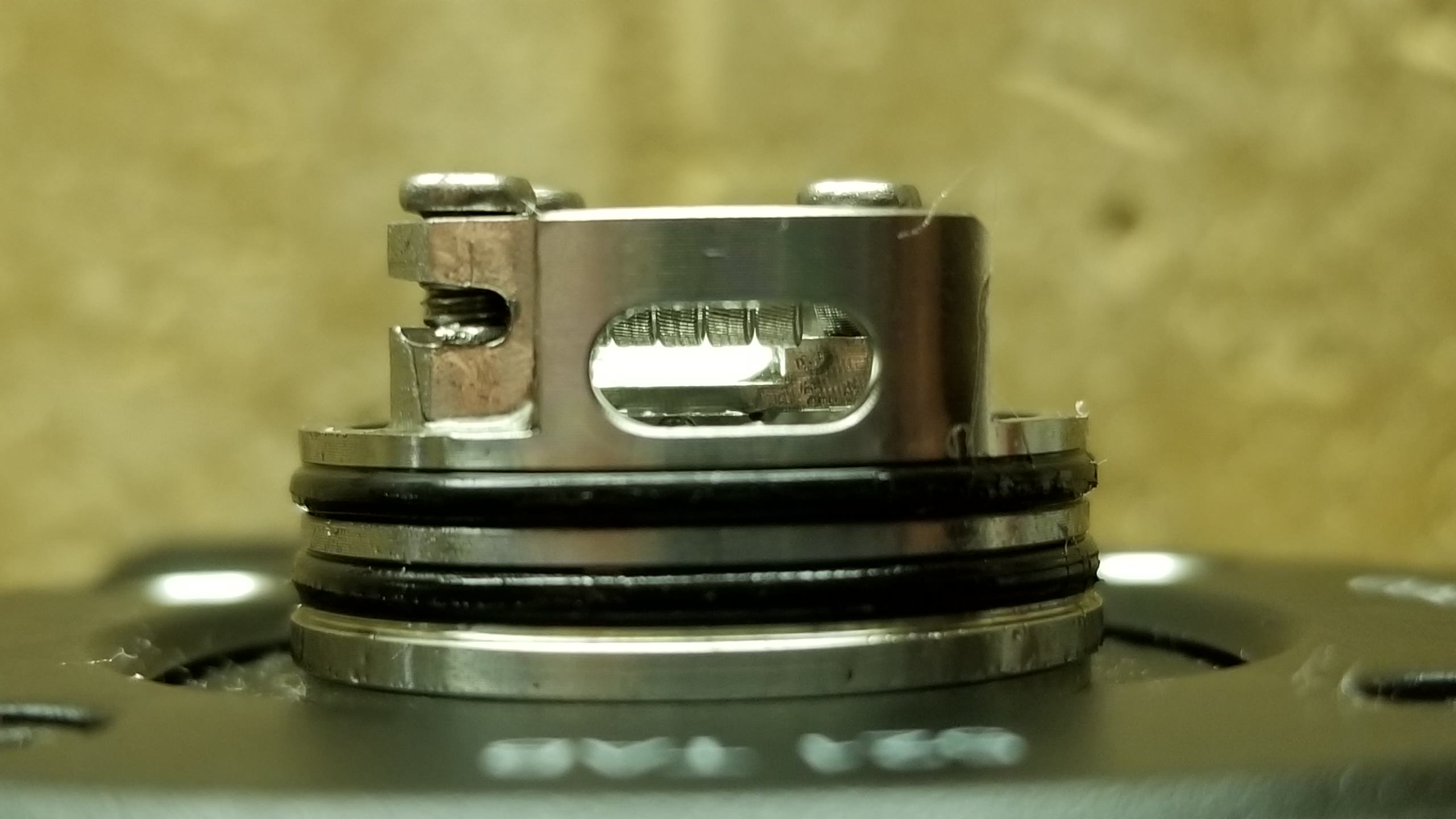 The build worked well but I felt like I was still missing a little flavor, it was really eating at me and I was determined to keep trying as I really liked the look and build quality of this RDA. I tried a number of builds from single core claptons to even single wire 26g which I have to tell you is a little hard to trap under the screws, I had to use my thumb to keep the wire under the screws when tightening down. 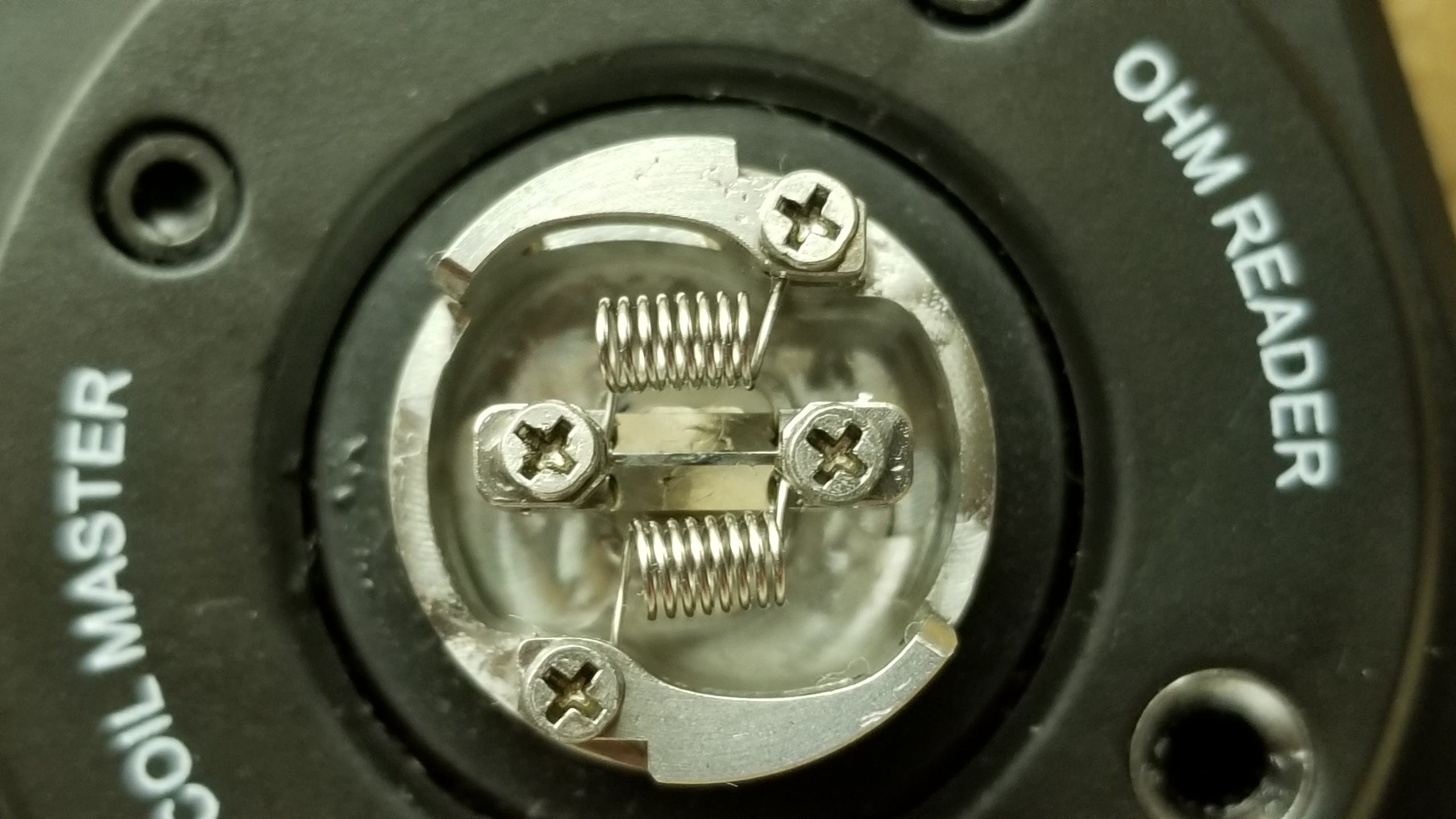 I had just finished reviewing the CoilArt DPRO RDA which is a similar style except the DPRO’s side airflow angles down to the coil, not straight to it like the Nudge RDA. I put the exact same build in both and decided to do comparison. 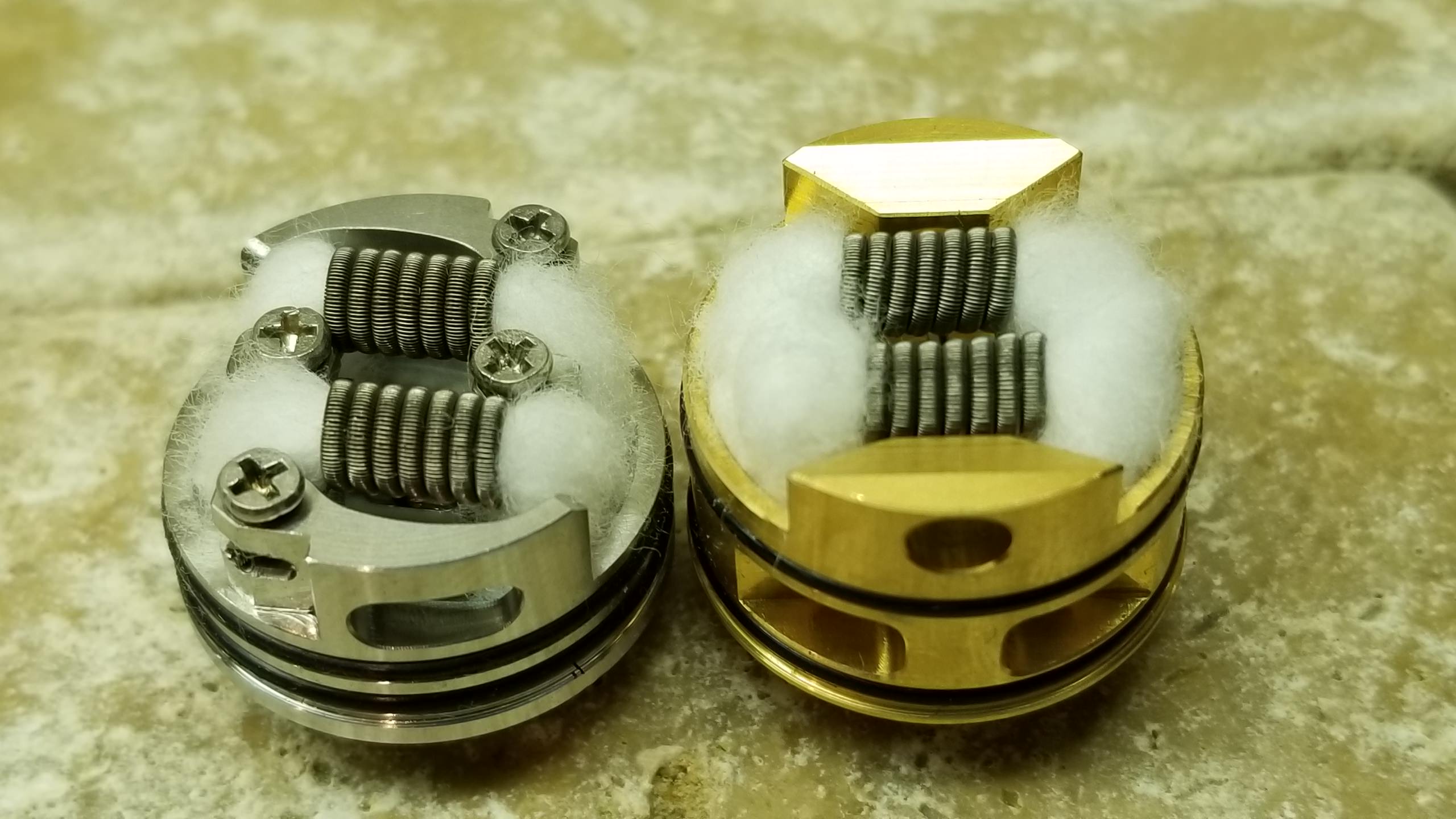 Using the same juice and mods set at the same setting I went back and forth for a few days. I purposely put both setups in a room I could keep dark so I would not know which RDA I was using, they both had the same drip tip. I also made sure the airflow on each was the same, needed to cut down the Nudge’s airflow. After a few days I have to say I could consistently pick out which RDA was which based on flavor, the DPRO had the edge for sure and it was easy to tell. This is not to say the Nudge has bad flavor but I have been testing a lot of great RDA’s lately so it was noticeable that the flavor was a little off since I use the same flavors when reviewing. This last build was one of the best though and if I wasn’t doing a direct comparison it would have been hard to really compare. I can say with confidence that the build quality and fit and finish is so much better on the Nudge RDA than the DPRO, if that is a deciding factor than the Nudge wins hands down.

I did try a couple single coil builds even though the Nudge 24 is not made for that. Look for the new Nudge 22mm, that one if meant for single coil builds. Just placing the coil in one slot was decent, I wasn’t mad at it. This has the coil off center though so I thought I might try to center the coil and see if I would have some success. 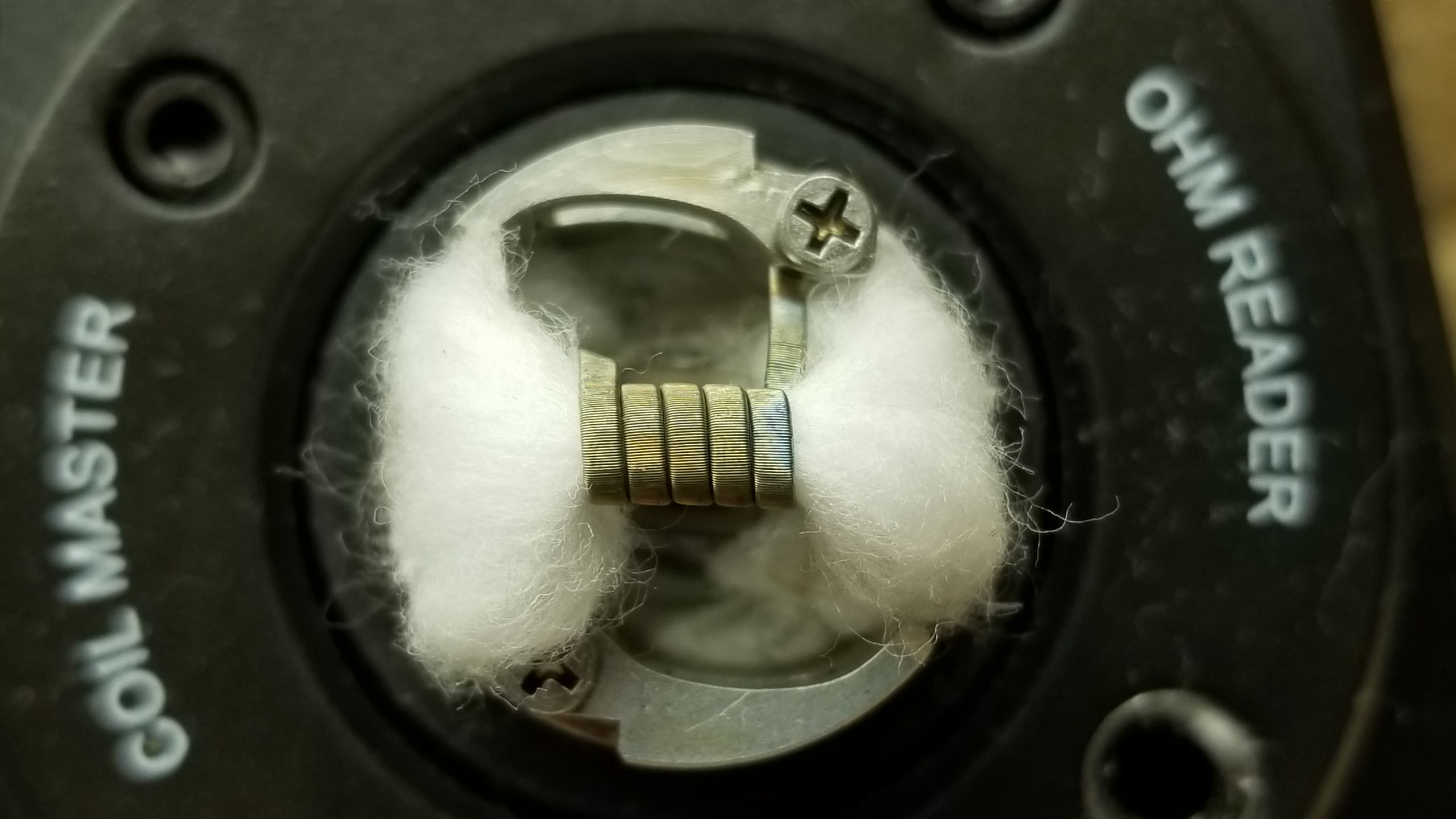 Success…nope, I liked having a single coil to one side better and it is tricky to bend your leads in all different positions to get it centered, definitely not worth the hassle. If you want to do single coil builds wait for the Nudge 22mm instead, I don’t have one but plan on getting one.

Forgot about anything bigger than 3mm inner diameter coils in here unless you leave your leads long and build above that tight deck. Even with 3mm ID coils you need to be careful that you don’t get a short, not much space in that tight deck.

Wotofo does advertise a Staggered Z 4-post deck with large space for easy building. It is not hard to build on but I would not say easier, there are a lot of RDA’s that you can throw a build into faster and easier than the Nudge. Not an RDA I would recommend to someone starting out, this is more of an RDA for intermediate and above builders.

No problem there, it squonks like a champ with every squonk mod I tried it on except one, my Therion BF. It wasn’t a problem with squonking itself, more of a connection issue, with either the Squonk or regular 510 pin if would not read the tank. I have tried more than a dozen other tanks on the Therion and everything else works fine. I also tried the Nudge on several other mods and it worked fine as well, the Nudge and Therion BF just would not get along.

I have to admit, I really really wanted to love the Wotofo Nudge 24mm RDA but in direct comparisons with other RDA’s the flavor was just off enough to knock it down a notch. The build quality is excellent and I personally like the looks, the other colors look damn cool. While I don’t love it I do like it, just wouldn’t be the first RDA I would reach for. It could be the crowded deck that contributes to the slight lack of flavor or the top cap that has a sort of catch ring at the top. After building and comparing to other RDA’s for more than a month I can’t honestly say that is has excellent flavor, just good.

This is all subjective though and your experience may be different than mine and that is OK. You won’t be disappointed at how well the Wotofo Nudge 24mm RDA is put together though, they did a great job. Based on this I will be getting the New Wotofo Nudge 22mm RDA which is more suited to single coils, I have a feeling that will be a good one.

Check out how this stacks up to other tasty vape gear and meet the Steampugs team of reviewers. Your bound to have a good time and read up on some great products, not so great ones too http://www.steampugs.co.uk/

Some of the mods used for testing 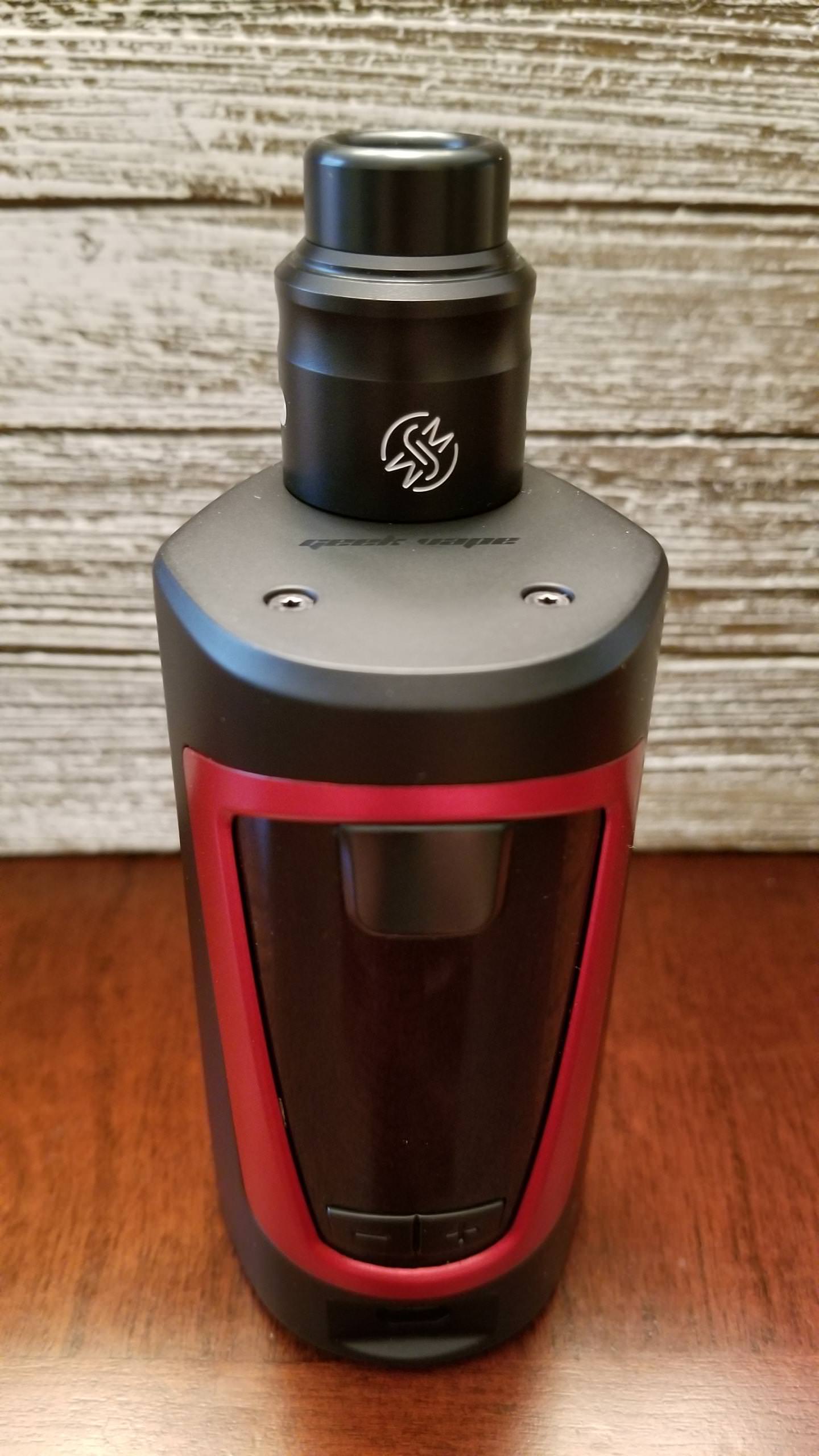 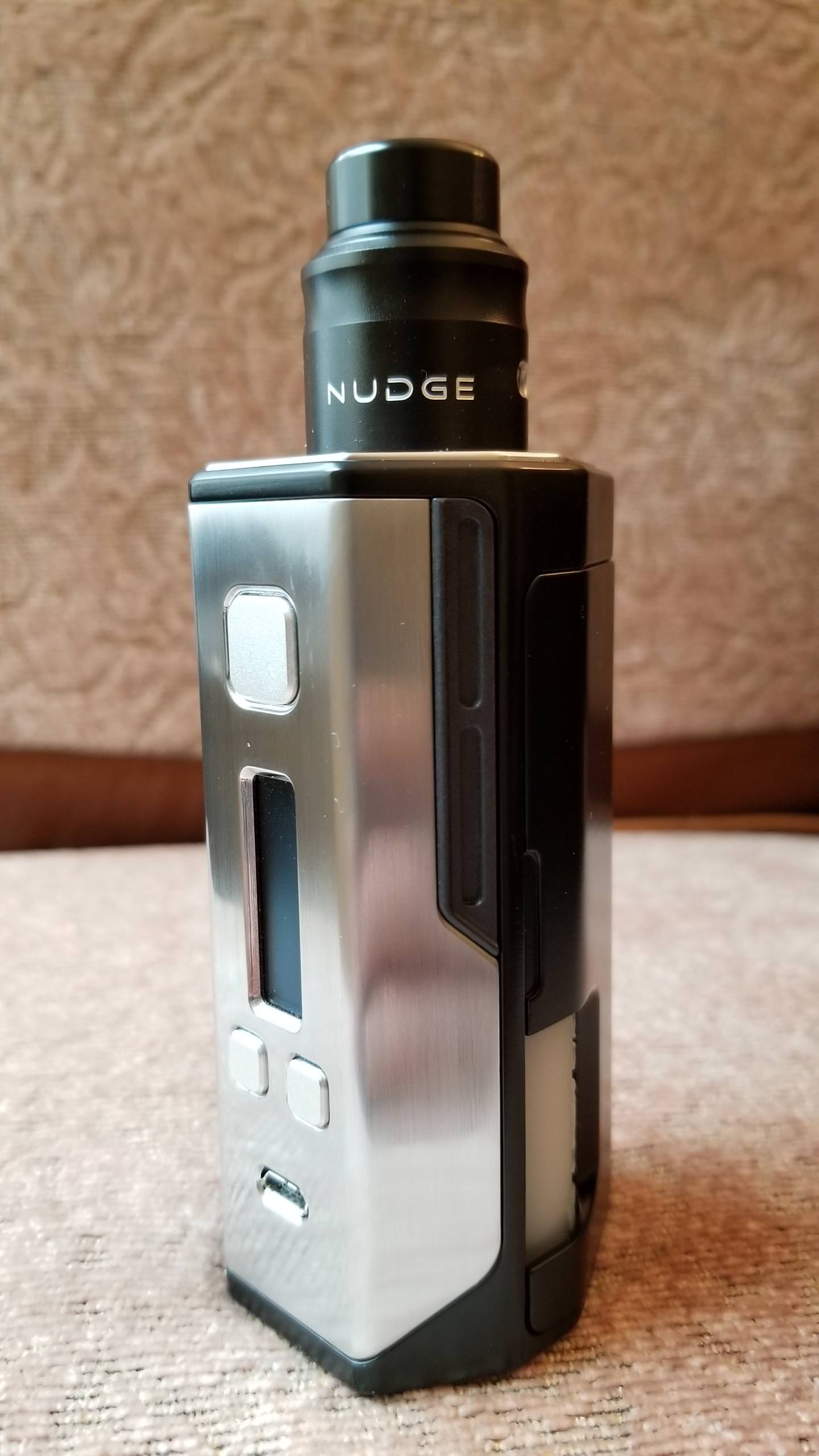 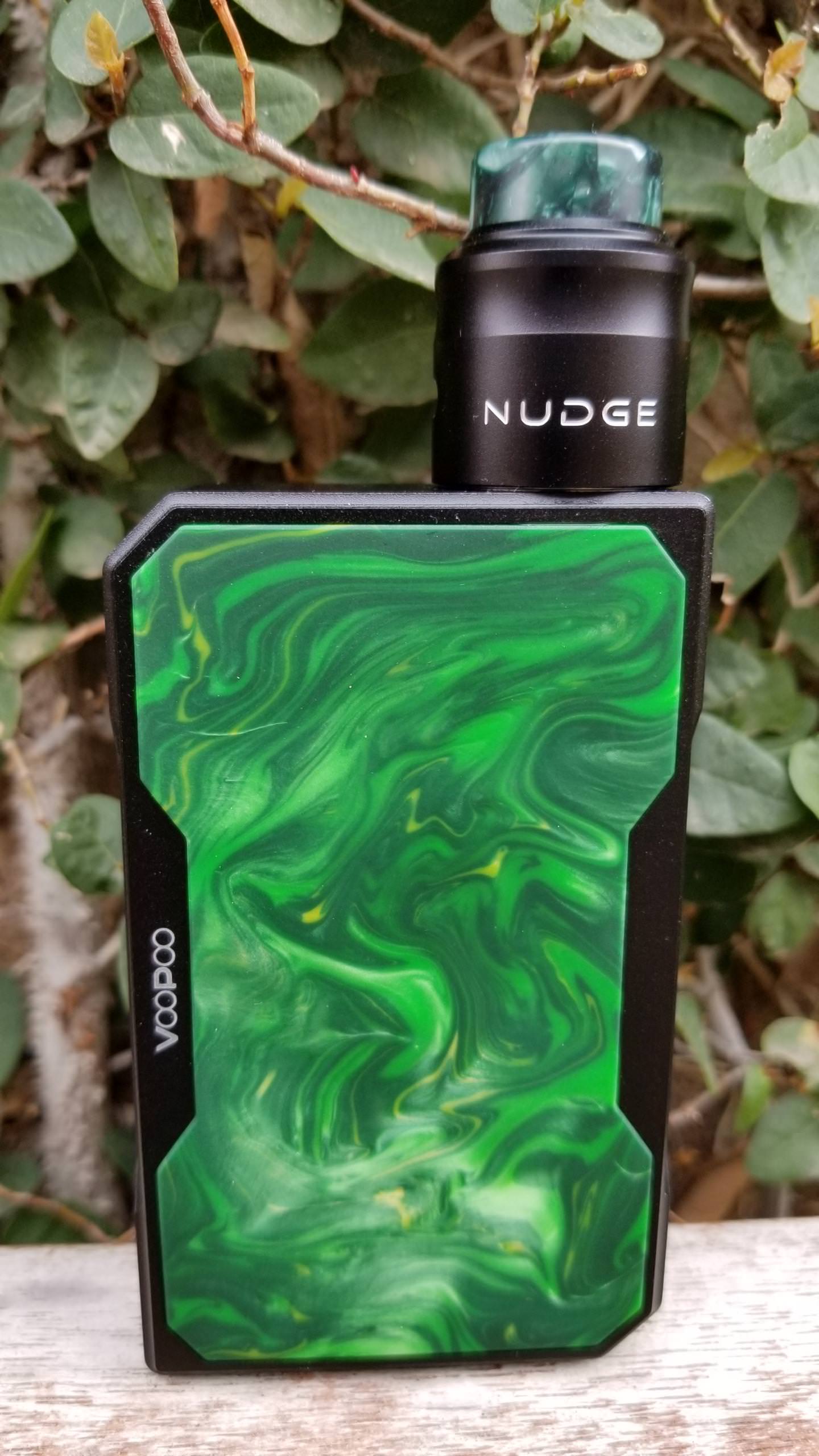 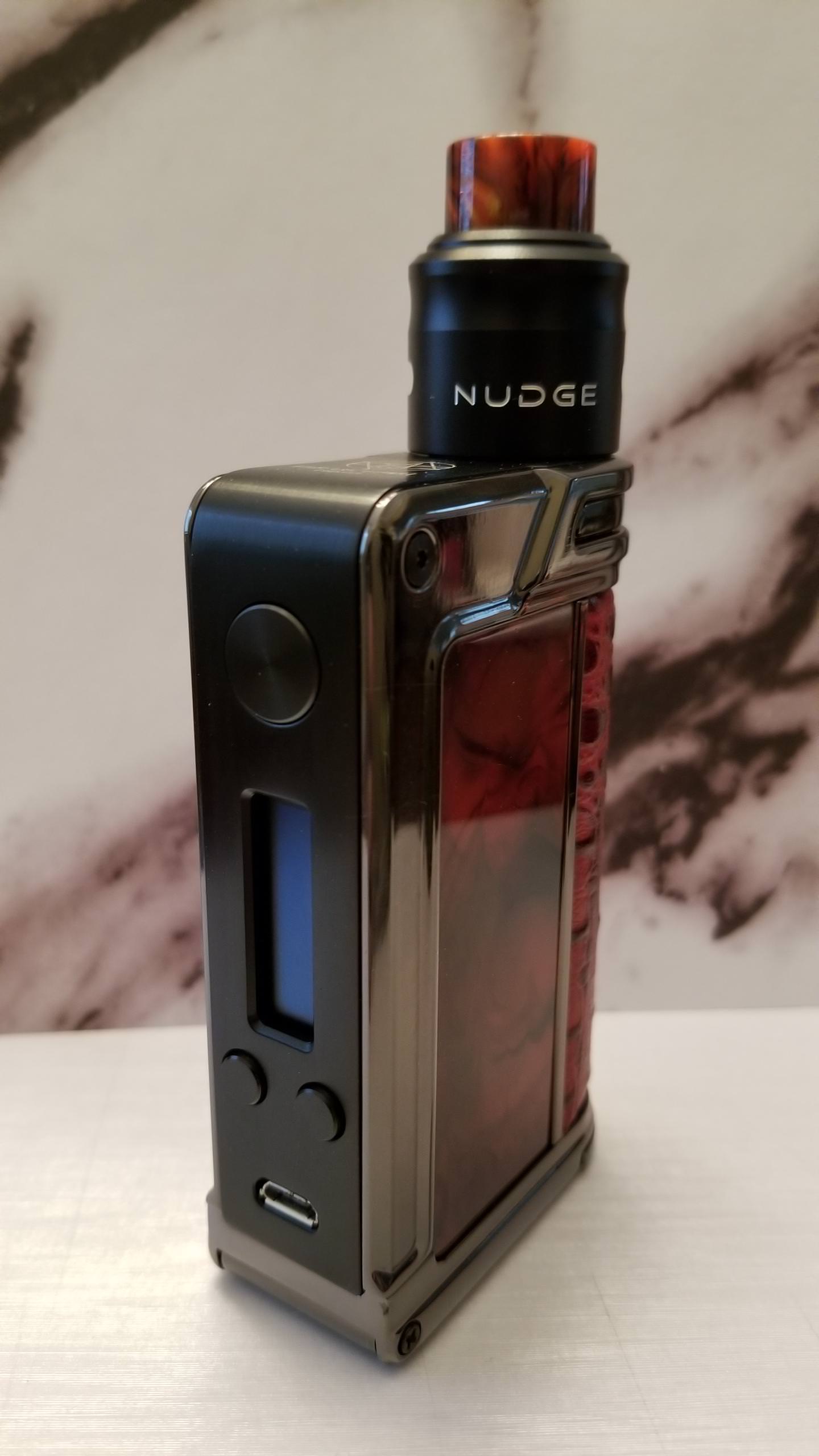 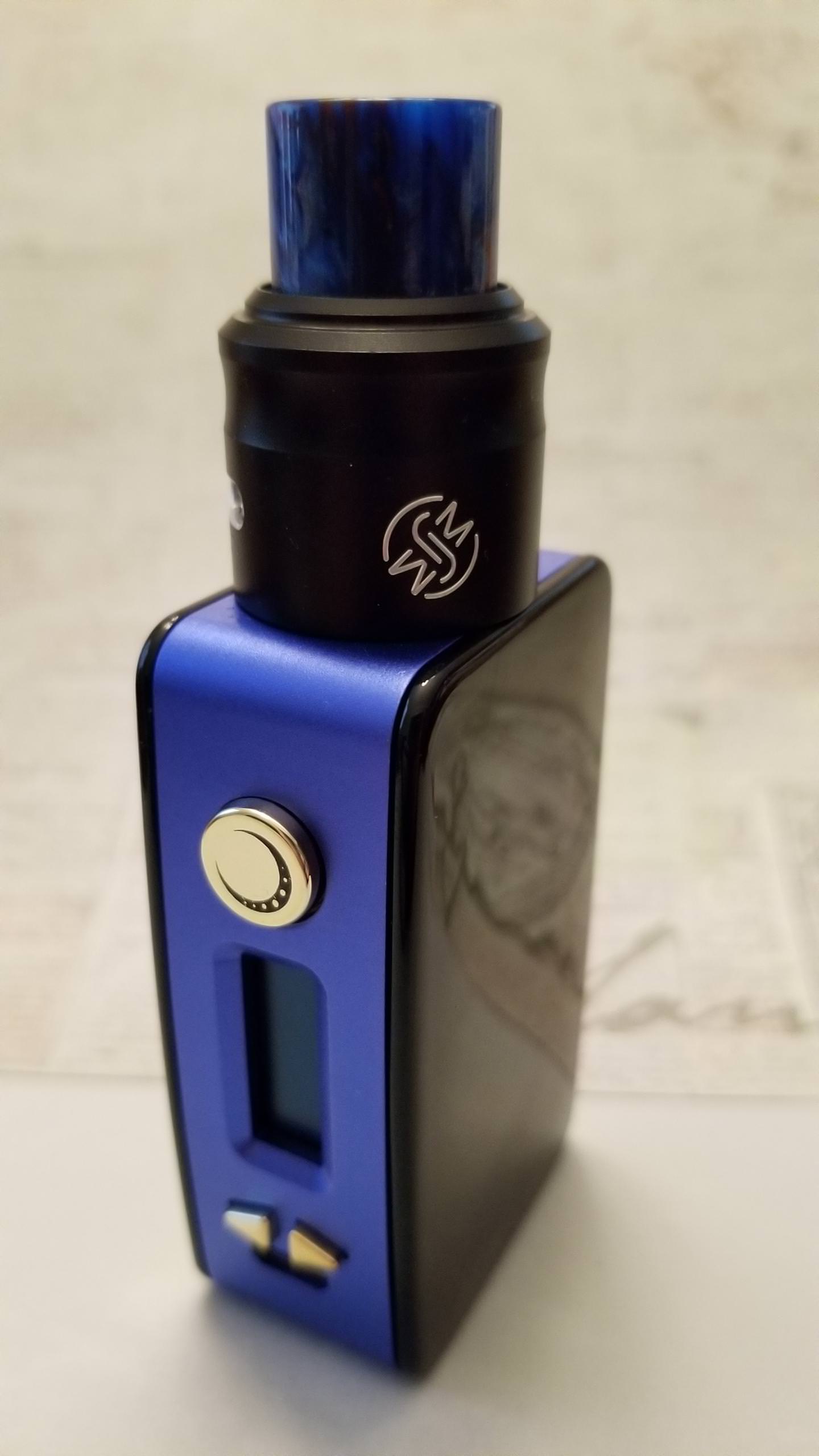 And the 2 that just couldn’t get along, the Lost Vape Therion BF 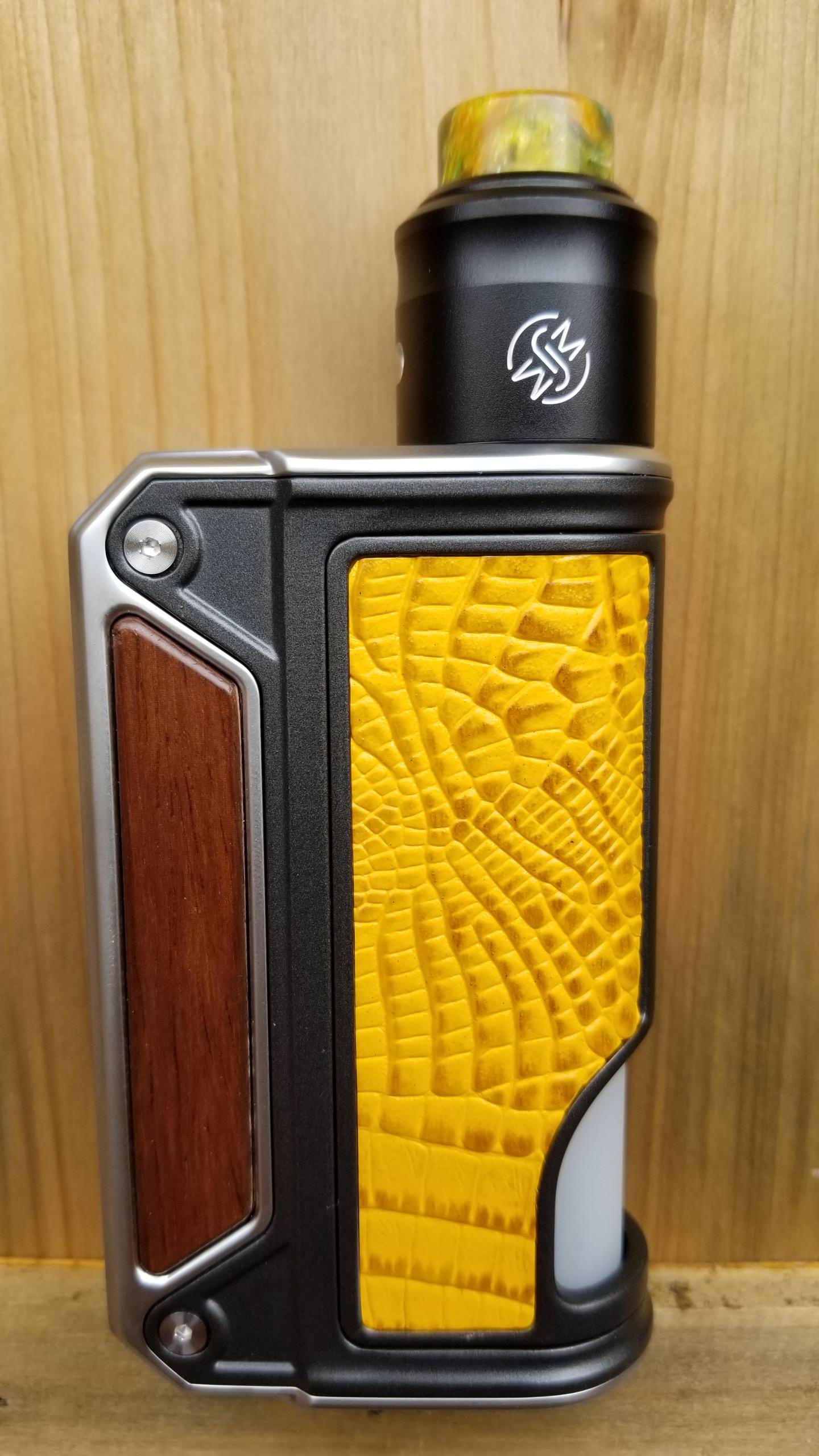 Thank you once again!

Thanks for the review! Excellent work brother.

Another great review! Thanks for the info!

Great review Mjag!
And it looks frickin sick on that Littlefoot with the matching drip tip!

Thank you @Jenny1978 @Norseman and @VapeyMama

VM, that littlefoot kit is pretty cool, was in a friends vape shop when they came in and he sold 3 or 4 in less than 30 minutes. A little on the pricey side though, I did get a discount and have no regrets. The kit as a whole makes for a nice little kit to take around in your pocket. I should review it if I can get past my current que.

Thank you my dear!