Hey, has anyone got any thoughts on clutch vapours MOAB? I’d sell my children to get a good clone. Someone on reddit suggested FA forest fruit and FA fuji apple, not sure if it can be that simple. Thanks for reading.

Max VG? Any Sweetness? Add some liquid Stevia (Pyure for fruits) or maybe some marshmallow for mouthfeel and sweetness. Maybe some saline and distilled water (common for Commercial juice). While Fuji may be considered a “best apple” …could be another. You are right “it can’t be that simple” as main goal of most commercial juices would be “clone defeating”. Whip up a small batch of Forest fruit and a separate small batch of Fuij and test separately to see if it’s even close

I have both of the flavors you mentioned, but i am not familiar with the juice you want. Please describe it in some good detail?

Best thi g i have found so far is:
Try 3% forest fruit

I like to use .5% TFA pear to make the apple pop a bit more

But somebody also mentioned that on their instagram they use a raspberry, so i am assuming if they do it is a very small amount.

Eitherway i am about to mix some up and try it out. Lol no baseline to go off since ive never had the real stuff tho

Heres what i just mixed since i have been wanting an appleberry mix already. Added a little cream to help blend and smooth the harsh forest fruit… 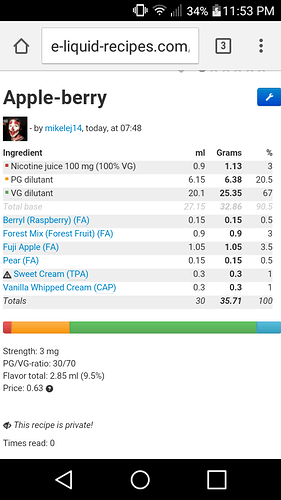 Thanks for the responses, mikelej14, how does it taste? Anything like MOAB?

Well i only just mixed it, i did have a taste and it is quite good, hard to describe really definitely getting apple but the berry is still pretty undefined just kind of a mess of flavor there. Ill try it again after a day or two and see if things have come together more lol i have never had moab to compare just thought itd be a fun flavor profile to work on

can you describe moab better?

From what i found googling a bit, it is 60vg/40pg, mixed berry and apple profile, reddish pink in color and some darker color too so i am guessing it has marshmallow for sweetness as its a little darker than other ‘sweeteners’, though i used sweet cream and vanilla whipped cream instead because i have used forest fruit before and it was quite harsh to me, wanted sweetness but also something that would help even it out some, and FW raspberry which could account for the reddish pink tone to it also.
I dont have FW raspberry, only FA so thats what im working with. I will see how my current mix progresses. So far not steeped any just SnV, its not bad but not something i would pay for lol hope it improves in time.

Pokin around on the interwebs I found this one for you guys.

ALL
OF
THEM
just kidding

Ive been meaning to get more blueberries, raspberry/blue raspberry, apples, toasted marshmallow, brown sugar, and gotta get a bigger bottle of Lemonade (LA) since i made my pink lemonade recipe i went thru the small bottle in a couple days lol everyone around me loved that one so it just drained quickkkk hah bought the small bottle just to try, little did i know itd be main ingredient in one of my best mixes lol

Ill make mine public, theres a few on here for pink lemonade but they were just all missing something i think. I think youll like mine if you have the stuff to do it up id love to hear what you think of it

Once I get some more apple flavors I will improve what I just did up for this MOAB mix, but I haven’t had it before, and its a pain to find online sources to order from now with the new law here, so I am SoL on trying it I guess. But, after leaving it over night, it has become quite good indeed, been vaping it all day

Don’t know if it’s close to MOAB or not, but it is good either way so I will still enjoy it hah

TBH the toasted marshmallow tastes kinda like charcoal. I don’t know if I will use it again. If you get Blueberry I highly suggest the Wild Blueberry by TFA, I tried a couple of small bottles that were in a bunch sent me that a friend didn’t want and I know why they were in there.There was the Inerwa, Blueberry jam by CAP I think, Blueberry candy and Blueberry cotton candy by fw. and a bottle of LorAnns didn’t care for any of them then I got a request from my wife for this recipe and got lucky with the Wild Blueberry

*Cinnamon red hot flavor diluted by half with VG
This recipe has two different strengths the numbers are ** / ** like this
I like the light better it’s a lot easier on the throat the other one seems to be heavy for some reason. my friend that owned Bionic Vapor all his juices were mixed at 30% flavor I’m finding lightening a lot of mine are bring out the flavors really nice.

How is the oatmeal cookie? I almost* ordered it but was like naa i dont think ill use it… but the more I think about it the more things I can imagine putting it in…

I got it specifically for the blueberry recipe I posted and haven’t used it in anything else as of yet. I’m sure the day will come when I do. I was looking for something that could imitate that crisp part of a berry crisp desert and between it the brown sugar, golden butter and cinnamon dilute it’s pretty spot on. I did the crust part first and tasted it and it was great. I then added the berries, I’ve considered removing all but the blue berry and adding a little sweet cream but I don’t know.

Dude! That apple-berry is delicious!! I only made it three days ago (I used fa whipped cream at 1% instead of the other creams since I don’t have them) and it’s already totally bomb. I’m gonna whip up a big batch.

Hell yeah! That is awesome to hear, thanks!

a killed the cat question (curiosity) @mikelej14 Have you had Capella’s Sweet Cream? If so can you do a short comparison for flavor, similar, dissimilar and creaminess comparison? I’d appreciate it mucho. One of the first best recipes I got had Capella in it and I’ve just always used it. I’ve got fresh cream whipped cream and probably a couple others similar just not TPA Sweet Cream

I was out bar hopping on Saturday with my chiropractor… I had the apple-berry mix in my tank and he kept grabbing and vaping it saying, “mmmm! This is SO good!” Lmao! So just fyi, it’s drunk chiropractor approved!