MONQ Pen The not a vape but vape -_- rant

So I just saw this on facebook and it really p***** me off, heres the link:

What annoyed me most about this is that they are advertising it as “not a vape” when it clearly is, if anything is going to get kids vaping surely its rubbish like this?

It apparently only contains VG and natural extracts and they’re making out that its 100% safe when we all know that there is some inherent risks involved with vaping, but as ex smokers the risks are worth it compared to having analogues. Why is this allowed?? Is this just me or should the company be more forthcoming with what this actually is? We have to abide by a shedload of regs nowadays and I don’t think products like this should be allowed to claim they aren’t vapes when evidently it is

is this just me being weird or is anyone else in agreement ??

Apologies for ranting everyone I hope you are all well

They can try to get away with it, but they are pissing in the wind. Even 0 nic has to go through the FDA process.
It’s just a matter of time before these people give vaping yet another bad wrap.

yeah thats why Im annoyed, it always falls back on us

As it’s being marketed as an herbal aromatherapy device, they might get away with it. The FDA has no jurisdiction over herbal remedies (yet). This might be the direction we see some companies going if they want to find loopholes in the FDA regs.

What bugs me is that it’s essential oils. While I’m not against essential oils in general (my sister sells Young Living EO and has given me a few bottles, they’re really nice), I don’t think vaping them (regularly) is a super hot idea. This has the potential to cause even more problems down the road if/when someone winds up with lipid pneumonia. Because it’s like a vape, it’s going to be lumped in with vaping and any problems it causes will become our problems.

My focus is being able to continue to vape. I don’t know the best approach in dealing with government. They are masters of twist and shout, manipulation, and lies. How do we feed their agenda and continue to vape? I have no idea. Sell all vaping enterprises to Philip Moris, Monsanto, and Johnson and Johnson? Hope like hell enough people start vaping to impact voting? Hope like hell those people actually exercise their right to vote? Hope like hell the candidate giving mouth service to vapors actually does something after being elected? Even in my own writing I see a lot of “hope like hell” and not much else. What can be done with a society that hands all of their problems over to government and goes back to watching horny housewives? I don’t know.

What the hell, you can’t even chuck tits with that thing 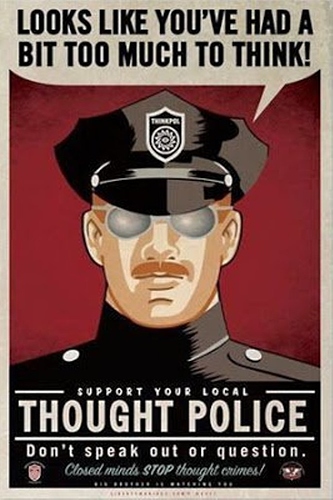 Coming Soon! To a reality near you!

My daughter ordered some of those, I said but those are not good for you you can’t vape that, she said but you don’t inhale them so it’s safe! I about lost my shit, and had to walk away.
I offered to get her a real vape and make her some juice with the sent she wanted and was like but I paid like $40.00 for these!

Hopefully they are not additive for her. As a kid I used to buy a cigar once in a while. Smoke usually part of it with friends. Wouldn’t get another one for who knows maybe a month. I could take it or leave it. There was no urge to smoke one. Of course I couldn’t inhale the damn things. I would love it if vaping were like that. Leave it at home or just take it along when visiting certain friends. Take it or leave it. At that point I would have zero reservation.

“Coming Soon! To a reality near you!”

No, its been here for quite some time. I’m in Indiana-istan where they’re so crazy I barely go anywhere and definitely don’t discuss such controversial subjects like vaping and rights and freedoms etc. Causes “popcorn lung” and corrupts the children you know. Oh the horror…

I’m here as well! I walked into work with a vape one day and the owner was like that’s great! I’m glad you quit smoking, here’s a raise!

Let me guess. You work in a vape shop right? No seriously the people in Indiana are for the most part salt of the earth good people. Government employees are another matter.

This I know moved to central Indiana from Chicago, talk about an eye opener!

I live in rural area between Peru and Logansport and my wife manages a restaurant in Kokomo where I was born and raised. When you say central , not to pry, but are you in the same area?

Close, Anderson. Make my way up to Kokomo about once a month.

That’s insane. Here in Michigan I haven’t run into any real resistance. Occasionally some red nosed old fart will spew “why that there’s worse than smokin!” then scratch his ankles without bending over and go away. And then there’s the occasional church lady that will look down her nose with utter disgust and go away. Bottom line they all just seem to go away by themselves. Couldn’t ask for more.

It’s not really the people, it’s the government!
Remember the v.p. Was the governor!

My father was born in Anderson (1922) though I have never spent much time there. You’re correct that it is the government and with Pence waiting in the wings its about as scary as anything could be if something happens to Trump. I wish the rest of the country knew how much Pence is despised in Indiana. Most vapers are aware of the patently unconstitutional laws passed in Indiana regarding vaping. They knew it would not stand up (didn’t) but in the meantime they literally destroyed the vaping businesses. Of course, Pence signed it into law.