I have tried a few temp control builds. A couple with ti that failed horribly and a couple with SS still failed… I do believe it was the mod I was using but I have finally succeeded!! SS 8 wrap 3mm ID dual spaced coils on my iJoy RDTA box mod. OHMS out at .25 and man this is nice!! Any other successful temp builds others recommend?

I don’t know your preference, (wire, ohms or other), but this build I’ve been vaping for about a year and a half… It has never failed in TC for me.

This is my all time favorite build to date. This build crank out more vapor and flavor than any of my previous builds. I hope someone try this build and let me know what you think. You know it's in TC mode Dual 22g, 6 Wraps Spaced Titanium Coils... 2.5mm ID. It should come to .05-.07 ohm. IMO the ultimate tank build. If you ever took my word for anything this is one you must try. There is no difference between this build and a dripper. I actually like it better than a dripper because it doesn'…

That is super deep sub ohm right there lol… I don’t usually go that far down in the basement but I am 95% kanthal… Interested in the temp control because I don’t like super hot vapes… I havnt had a pleasant experience over 80 watts yet… I usually build dual regular Claptons that I make myself that ohm out around .3 to .4 I am not against trying it though but I think my lowest gauge of ss is 24… I have to check when I get back home… Thanks for the advice though I appreciate it greatly!!

I have finally succeeded!!

TC requires rock solid build quality for sure. If the atty or build do not have perfect connections it will drive you crazy.

There is a learning curve with TC but once you figure it out it is the most consistent vape for me anyway.

This is my current favorite build. 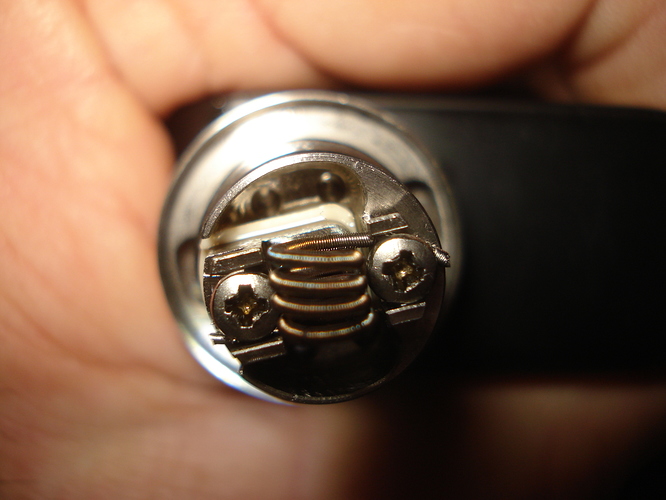 @Jayrell have a play around with steam engine and you might be able to get where you want by dual twisting some 24 or 26. I haven’t done twisted lately as I bought some ss clapton rolls recently but I used to often dual twist 26 or triple twist 28 ss wire for tc builds.

I like @Pro_Vapes builds with 22ga Ti, its my default build although on a 3mm or larger ID. On more powerful mods l use bigger builds. Anyway, as I plug on here often, I think hemp wick is something everyone should try. Here’s a thread I put together on it.

I was thinking I might write a little tutorial on how to wick with hemp. I've been using it for a few months and I think it is superior, probably due to the very long, stright fibers, but it has some quirks. If there is interest I will write something up and illustrate a couple of builds. Can I ask for folks to vote with the like button?