Hi! I was thinking of possibility of knowing when I added the new flavor to the stash. Then it would be easy to find out the oldest ones. Of course I may have buy more, but that’s different. Sort of time line.
This is just a creat community! Thank you all so much!

I don’t see how ELR would be useful for that. I have several bottles of the same flavor bought at different dates so even if there would be a field in ELR to put a date in, I still wouldn’t know which bottle was bought when. Other bottles I entered long time ago and have been reordered 2 or 3 times so an automatic date added field in the database would paint a distorted picture of what’s new and old.

You could maybe check your inbox for order confirmation emails to know when you purchased a concentrate or you can individually label your concentrates the day they come in or maintain a spreadsheet of what comes in and when.
That would still not say a thing about how long a concentrate has been sitting on the shelve at the store you bought it from so unless the flavor manufacturer would put a created on date on the label, even those email confirmations from your online orders are a vague indicator of the age of your concentrates.

I don’t see how ELR would be useful for that.

I can. When a flavor goes bad, you can start to get a good idea of how long it might last. Which is part of why I document when I buy something.

I take it a step further and add where I bought it (which has aided me in determining who sells watered down flavors and/or who didn’t shake before dispensing on rare occasions.)

@ziggy3
You can put all of this into your flavor notes though!

Think of it like a ‘scratch piece of paper’. It will hold anything you want to put in your notes.
Take a look at my notes for Inawera Shisha Strawberry for instance (the flavor I have bought most often, and the most of).

Tons of useful things for the notes section of a flavor.

And from that point of view, Suomy’s absolutely right! Nothing in ELR needs to change.

But it all depends on how you look at it I guess. chuckles

I don’t see how ELR would be useful for that.

You can put all of this into your flavor notes though!

Think of it like a ‘scratch piece of paper’. It will hold anything you want to put in your notes.

Is that really the place to put it? Feels a bit like hacking the database, using features that weren’t really intended for that purpose.
It would be one thing if you have a “personal notes” field in the flavor section but the notes are very much a public feature. People use this information to find out what flavors taste like, what they pair with, how strong they’re used.
While there’s no police who’ll prevent anyone from doing this, I’d try to discourage people from using ELR for other things than intended purposes. I think there’s enough garbage with flavor names to start messing up public notes too.

I think there’s enough garbage with flavor names to start messing up public notes too.

Better in flavor notes than in the Flavor Name line… Which is why I mentioned the whole “location numbers” aspect.

You think it’s polluted now… How about God knows HOW MANY flavor dupes of JUST Sweet Strawberry Cap (or TFA Ripe) all because folks have the location number in the name for their convenience. Each with different locations.

I’ve wiped 1000’s of these over the last few years, and some folks are at it again.

I’m all for “everything in its place”, but you also have to work with what you’re given too.

I think there’s enough garbage with flavor names to start messing up public notes too.

Realistically speaking the public notes are all messed up anyway. Some people have used them for the intended purpose which is great, but I see just as much crap written there as the flavor names themselves. I understand what you’re saying but if we discourage users from that then it stands to reason they will find other ways and we will only see double the crap appearing in recipes and flavor names then. Above all else 95% of the users will just ignore what we say anyhoo.

I would LOVE it if Lars added that. I have to run an entirely separate program to track my stock.

I have to run an entirely separate program to track my stock.

Would you consider using an off-line calculator? The one that I use HERE has inventory management. And it will import ELR recipes.

Hehe, thank you @TorturedZen that’s the one I’m using. I’ve not been able to figure out a way to mass import ELR recipes, but only single imports. Thank you for the heads up :).

I do appreciate it. If I wasn’t using it, I would after you shared it. Many thanks. 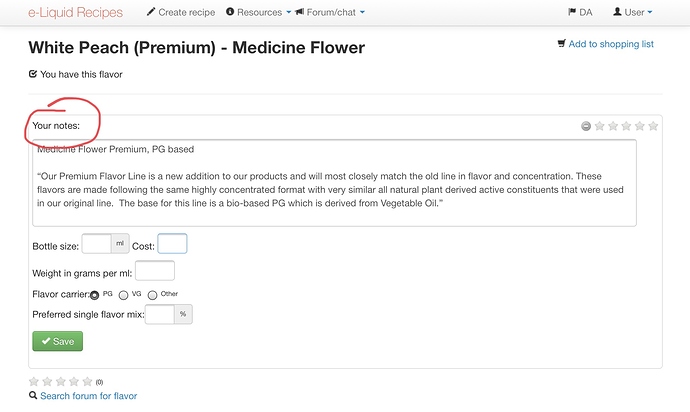 That shouldn’t be too hard, good given he’s already created/implemented the code for that in the recipes segment!

That is how I started, excellent calculator that I still use

Aha!!! So this is why the same notes appear over and over again in the flavor notes. I’ve been wondering about this since I joined.

I need to add some doumei to the data base. I’ve seen at least 3 ways they’re entered. How would you like them entered? I’ll add my stuff and I can do the correct way for the others if you’d like? Then you or whomever can delete the unnecessary ones

I need to add some doumei to the data base. I’ve seen at least 3 ways they’re entered. How would you like them entered?

They should be entered as:
Flavor Name (DuoMei)

Even though their logo is lower case, if you look at the proper company name (bottom of the page), you’ll notice they capitalize the D & M.

According to their website they only have 15 flavors that are (beyond a doubt) safe to use [those under “Water”]… Hard to believe, but that’s all I’ve been able to find so far anyway.

Just remember that we never want “flavor” or “concentrate” in the name (as far as the database goes) with the rare exception of certain TFA!

Thanks for asking, and I’ll try to follow up on it in the next couple days!

Looks like I need to research them more. They also have a concentrate section specifically for ecigs which is where most of the flavors I have are listed.

Definitely wanting to be safe!

They also have a concentrate section specifically for ecigs

Feel free to drop a link! The more information/resources the better!

Haven’t done a full check of either section on their site vs my flavors. Haven’t messed with them much but wanted to start sft them, then noticed how fee were in the database