Not a lot of data here on them. The ginger is supposed to be good.

Their sister company has a section of flavors they consider suitable for vaping, so you’re right that a lot of their stuff is meant for baking.

Huh! They have a date and a date nut concentrate!

This is the first time I’ve seen a vendor carry this flavor. Thanks @zigz.

I use their Ginger, Malt, and Cinnamon Danish Pastry regularly and always have them on hand. To me the Danish Pastry is better than CAP Cinnamon Danish Swirl or FW Cinnamon Roll. I love the doughy pastry taste in it. Here is one site you can get their flavors. https://highdesertvapes.com This site used to have the Ginger available but I don’t see it now. They do have a couple of flavors they didn’t used to carry though.

Here is where I bought the Ginger last http://ejuice4u.com/ginger-natures-flavors/

The Custard and the Bavarian Cream is good also. But that Danish has a distinct pastry note that is amazing… I don’t get this with anything else. Joy is the closest and for me if this Danish didn’t have cinnamon in it, then it would be better than Joy IMO. The pastry is like a Philo Dough and Funnel Cake together to me and it smells very nice.

I have been using them for a while and just a few days ago I dug them out and made a few mixes which are steeping atm. I have Kona Coffee which is great as well as their Organic BB cheesecake, Raspberry Cream and Strawberry Shortcake. All of them I got at high desert vapes. I find some of them can be a lil weak. I did have their Boysenberry but it was really very tart and I didn’t care for it.

How is the custard compared to cap

Well I don’t like CAP, long story short, Diaceyl gags me and gives me a sick tummy ache. I wish it tasted to me like it does most people but it just doesn’t. Among lots of others DIYers on other DIY threads there are more that have this reaction to diacetyl. So I am not the best person to compare CAP Vanilla Custard with. I will say it is similar to FA Custard but not quite as much lemon. If you are a CAP Custard lover, I’m guessing that it won’t blow you away but you may like it as an alternate Custard or as additions in other recipes. It is very creamy and is great with puddings creams and milky recipes.

Amy? I’m Jamie. Anyhow, the Kona is good too, I use it often.

The Real Flavors Custards are awesome by the way.

I know your Jamie silly Amy Jamie Lol as much as we talk ! We need to share some Kona recipes I love that stuff !

Dayyyuummm, I didn’t even know you were here!!!

I think we both just realized lol

I just picked up a few new ones NF’s Organic Danish Pastry and Organic Malt thanks to @Beaufort_Batches recommendations I’m excited as they smell so good ! 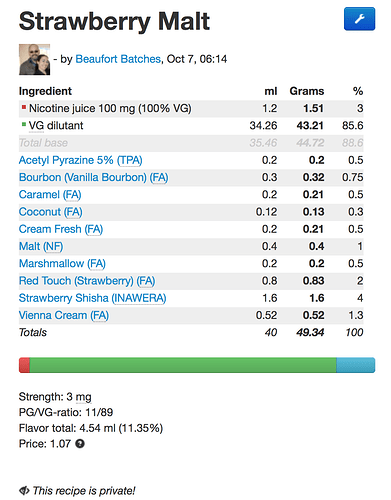