I have the Etekcity scale like a lot of people do here. I just got in a 300ml beaker, and two 500ml beakers. I would like to get a 1000ml beaker or two as well. But this little scale has outlived it’s usefulness if I mix batches that larger since it is only a 500g scale. I need at least a 1000 gram scale, but would like to be able to mix 16oz all at one time eventually. I guess for now I can mix in my 300ml beaker and just do that multiple times and fill the 600ml on the stirrer.

The only thing I have found so far is this one…

I have 5 of this I use for roasting and brewing coffee. Yes I am an engineer. They work great, I think they would be good for mixing big batches. I put a large Chemex coffee brewer on mine OK. 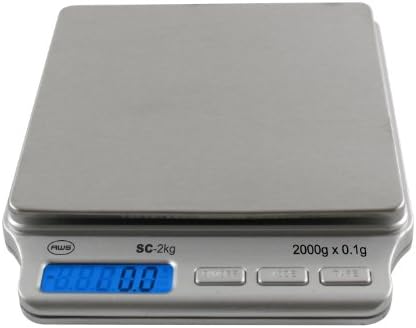 The SC Series from American Weigh is built tough for big jobs. The SC features one of the largest platforms sizes for a precision pocket scale (4 by 4-inch). You can also use the two included weighing ...

Even though I will be mixing large batches, I think I will still want it to have .01 accuracy, because there will be times when I use it for smaller batches. And I don’t plan on keeping my Etekcity scale. This thing is twitchy and sometimes I have to tare it a few times to get it to stabilize. I think that is because it is just so small and I mix large batches on it already. The more I put on it, the jumpier it gets.

I’m wondering if super large batches need to be mixed down to the 100ths. I really don’t think it would matter.

I’m with Pro_Vapes on this one. Another option is …
to add all but the VG on a lesser scale and then add the VG last using the volume method ala the graduation marks on the side of the beaker to reach final volume. Rarely do I weigh out VG on any mix unless it is a partial bottle mix. I just eyeball the bottle to the full point and let rip.

I know that this is more about scales… But for beakers, I picked up this set and am looking to pick up another… And it’s only 16.99 right now!

I really like the Corning stuff on my magnetic stirrer. They sit nice and flat and don’t move a bit. And I don’t use any padding or anything under them.

I only want a .01 accuracy because like I said, this will be my only scale. So I will need it to mix small batches as well as large ones. I will donate the Etekcity one to somebody on here once I get my new one.

I guess it depends how much it’s worth to you to only have one scale.

That wouldn’t be a bad idea. But I think if I were to do that I would just buy the .1 resolution scale and keep my Etekcity. But I just want one scale. My space is getting cluttered enough as it is.

2100 g and .01 accuracy. $236. I get the small space needs to be organized bit. I also like my current AWS scale real well. I know there were cheaper ones posted.

i love my aws its worth the money.