I’ve done a lot of research but it is just getting more confusing, so bear with my questions if you can.

Here’s a little background if anyone has time to get me headed in the right direction:

I’m going to give this to my neighbor who wants to stop smoking stinkies.
I’ve had this a couple of years, but have been on-again-off again vaper. It still works fine, and will hopefully get him smoke free.
Now I’ve started making my own Juice (Thank you all!) and think a slight upgrade in a new box mod is in order, but wow… the options are in the hundreds and soooooooooooo confusing to a hack vaper like myself.

Anyway, what I’d like is: (and thanks again for any suggestions)

Max price of $50-$60 including tank
Reliable - Like my Kangertech Nano
Larger tank than the nano
Top Fill (without taking it apart)
18650 Battery (Is a two battery mod better than a single?)
No need for Temp Control (???)
No need for High Wattage (??? - I am vaping at 25W now, not sure what this High Wattage/Temp Control thing is all about, maybe it’s not for a fairy new vaper like myself, or I’m just missing out??)

OMG !!! TYPO TYPO ! “Fairly new vaper” NOT “Fairy new vaper” (Not that there’s anything wrong with that.

plenty of mods in that price range, dual battery is nice for life before batt changes or if u desire higher watts, 80+, if u not into rebuilding coils just yet, i couldnt help u w/ experience but i have good things about crown3 tanks

Do I need to find out which mods the Crown 3 fits?

anything w/ 510 connector, not ego, just like that subbox.

lots of mods to chose but most dont like overhang and prefer flushest fit to the sides, u best reading product info about each width. The crown3 tank, only using as an example since u have to decide for yourself, is 24.5 so would be silly on a 22mm wide mod.The original Pico is nice and small but that wont even fit w/ battery cap, introduce the Pico 25, am rambling. Gl to u!

Hi ijoy captain pd270 for the box is nice and at a good price, will fit nicely under a crown, my son got it for i think around 35$, as for temp control this box is capable, that being said it is up to you if you use temp control you will need the coils to match ( nichrome or stainles or titanium) if you keep on the setup you are used to will be fine, the box my son have came whit sleeves to fit 18650 batteries, it will use 20700 a bit bigger ones if you like,
As worm1 said it will give you more using time if you dont push it, must agree whit you on the multitudes of stuff avalable, i like to vape at 15w and i did try temp control i did not like it, again this is verry subjective…

[image] 20700 batteries. Are they future or fad? iJoy quickly jumped on board and have released a device that primarily uses 20700’s. I was beginning to wonder if there was ever going to be more variety in battery cells. It appeared that batteries hit a wall in their progression… To be honest, mods haven’t progressed much either. Sure, they come in all shapes, sizes and colors, but they all basically do the same thing. What matters to me is how well the device does it’s job. It’s not always abo…

My Brand New I joy Captain PD 27070 is NOT Working!? I’m DEVISTATED!! It turns on, but Just WON’T Recognise any of my tanks?? It WON’T calibrate, I have to remove the battery’s every time I draw on it, just to get it write, but then it changes the resistance every time it goes into standby mode or gets turned off, (child lock) It seems to have been already been Calibrated to 0.86ohm, probably in the factory? And has a mind of its own? But it just WON’T keep the resistance of ANY TANK!? I’ve t…

[image] Hey everyone! I wanted to get a discussion going on this tank with the same name as iJoys’s new mod. It’s 25mm so it’s pretty big but it’s not another 3,000 watt lung exploding tank. I feel like this tank would be good for someone looking move up a size from something smaller, getting more vapor production and airflow than they would from say… a kanger subtank. [image] They used the new drop-in coil system that’s been popping up lately, where the coil is held in by pressure. The coil…

Wow never saw those warnings! To say the truht i never check any reviews, i just by and try… i got a pretty big collection,bought 2 captains whitout any problem so far ( only 2 months) then again there is sometimes no chance to take! Ijoy captain wont be in my recomendations any more!
That leaves our friend @Perry_Mason whitout recommendation!
My point is most box’s these days will do for standard vapping 15 to 30 wats, all 510 connections and capable of temp control… the rest is price and quality hard to get both…

was kinda interrupted before i could relate although u had great sucess w/ it someone else may not, As in the smok product thing it’s love/hate but best to get a lot of opinions and decide for yourself.

As in the smok product thing it’s love/hate but best to get a lot of opinions and decide for yourself.

yes i agree,thing is i remember my first mod ,not alot of choice in that time, and was not confident in my choice 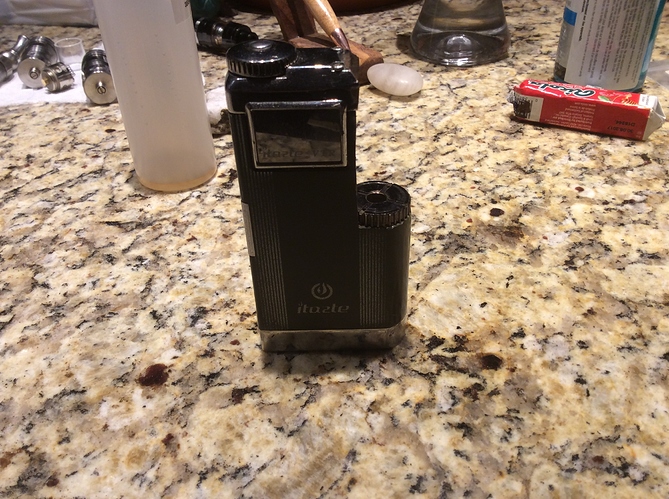 This was my first starter set up, One of the simpler box mods, but also one of the mods that give you alot of quality for your buck is the voopoo drag. (I’m starting to sound like the drag advocate).

I see them priced at around 45$ for the X007 version ones. You can probably get the carbon ones 10-15$ cheaper. One smart function that can be either good or bad, but usually good when it comes to prebuilt coils is that when you stick a freshly coiled tank on top of the drag it will give you a suggestive wattage to run the mod at, and its fairly conservative in its suggestion too. Example: I put a 0.4 ohm coil on my mod, it will tell me to run it at 42 watt. And it does run at 42 watt, when I change the watt from that point up and down, its to get cooler or warmer vape

I would stick a sense herakles 3 tank on top of it (think its around 19$), which uses the v-jet coils (which again is around 10$ per 5 pack of coils, but supposedly very reliable coils).

This is probably not the easiest route, but as far as I know and in my honest opinion, its the quality route (in my eyes). And seeing that you already know your way around coils at the 0.5ohm range, this shouldent be a problem

The new X-Priv 225W TC and TFV12 Prince Full Kit is a new line up from SMOK that features a HD screen with detailed vaping data and features the TFV12 Prince Sub-Ohm Tank.

Its an awesome tank you can get .4 coils for and the mod… is the da bomb. Or you can get two of these and keep it REALLY simple:

The SMOKTech Stick Prince Starter Kit is for vapers looking for a simple to use kit while still having a massive cloud producing experience. This starter kit features the Stick Prince Mod and the powerful TFV12 Prince Sub-Ohm Tank.