I need advise on choosing an rta and a mod. Now my favorite setup is my wismec theorem (restricted lung hits and flavor) on my rx2/3.

Now I have a friend who is going to UK this week. Any suggestion on high end UK gadgets that are within the 100-150 margin. No RDAs please, and regarding mods I only use regulated and I find looks of the mod matter to me alot. has to be UK made products

Actually guys, I was mainly in the lookout for UK made products, just edited original post.

Possibly @Pugs1970 or @Lolly could help.

@Pugs1970 perhaps, I have a feeling that @Lolly does the same as me and gets stuff either from China, or B&M Shops that get from China.
I’m pretty sure that every one of my devices: Mods, RTAs, RDAs, & RDAs are imports (I don’t got no tankses)

May have some luck here ?

Your one stop online & retail vape store providing a wide range of exclusive and high end products sourced globally for beginners and experienced vapers. Est. in 2013 Custom Vapes is the official UK home of many leading brands, we pride ourselves as...

Founf these pristine looking ones, but I think they are from US. Have a look guys, its going to be too expensive if I want to get it shipped to australia. Better off paying for a DNA 250 at that price range ya?

You want to splash out how about a dotmod petri RTA - amazing flavour and looks amazing. I have one it is awesome a little pricey but you get what you bay for. The gold is not just for looks either. As gold is basically the most inert metal it does not interfere with the flavours. The tank also is designed purely with flavour in mind. Hence the size only holding 2ml but that is the compromise you make for that flavour. Wowee I absolutely love mine.

Maybe one of the shops over there will have them 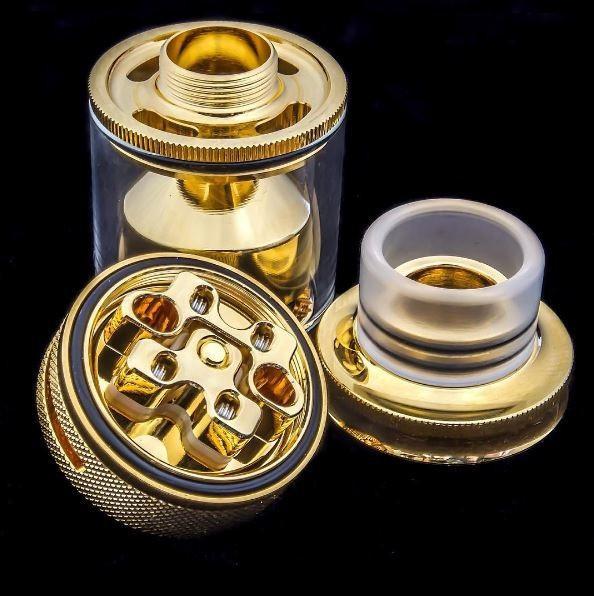 You can get them in most shops here, I Know No1 ejuice (all over the South East) has them

Hmmm, i might just invest, I have a petri v2 rda, which gives of flavor like crazy. How would you say it perfors as a restricted lung hit tnak?

nah it’s open mostly the air hole can be basically restircted to say 0.5 mm in theory but I think it would be too fiddly. In saying that it’s not wide open airflow like an RDA or anything. I haven’t MTL for a while if that’;s what you are looking for so I’d hate to tell you it’s doable.

It’s easily my favourite tank. Machining is the best I’ve seen, the coil you get with it is so cool, postless deck design, not a huge plus but allows them to have that short chamber for flavour. and is easy to work on The only tip too is get the top on quickly after filling as if you don’t it will leak. You have like 5 seconds to do it, don’t panic. The seal on the lid provides a vacuum type thing.

If any does get one watch a wicking video like this one - it’s not the best wicking video but just shows you the trick with the 510 connector. You have to screw it out a touch to build on the deck. Then do it back up again. All little compromises that really are no biggies, truly to maximise performance.

Defintely worth it, you will not be disappointed at all with this tank (except maybe with MTL, but i could not tell you)

M-vapes has some lovely walnut mods

I actually don’t think I own a single Mod made in the UK?..I don’t know of any apart from Custom made stuff, the Sites mentioned above would be a good place to start though, as for RTA’s the Sherman is UK but mainly sold out everywhere and although I don’t own one I have heard very good things about it, it’s a bit of a beast though, sorry I can’t be more help than that,

Maybe worth contacting Todd or Pauly Meatballs both prolific Uk hardware reviewers, who may well get to test UK made mods and RTAs that normal punters, could never imagine trying in our lifetime and provide you with some decent recommendations.

Todd has his own site Todds Reviews and may reply through contacting via there?

Vaping outlaws London or ukecigstore would be able to assist