I have a sample pk coming of 9 new capellas concentrates tomorrow anyone tried them yet? Ill post a picture tomo

I just mixed with Vanilla milk froth- I think this will be a versatile milk/cream. I made a simple vanilla milk steamer, 4% VMF 1.5%vanilla cream (Delosi) and 1% cinnamon sugar (CSL) .5% SS. It’s a nice milky vanilla. This is a sweet concentrate.

Sticky Buns- reminds me of a little Debbie treat, cinnamon bun but just a touch of cinnamon. It’s a bit light on dough/bun, I used 4.5% with 2% Frosting (Cap),lower middle sweetness

These are my opinions, off the shake, I’ll update in a couple of days. These were the medians off ELR, thereabouts, for the new Cap flavors.

I need to order shortbread, completely forgot but @WendyVapes said it’s definitely a one shot, cookies out of the round blue tins you get at Xmas . 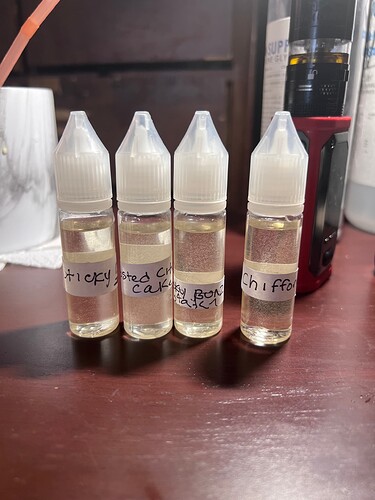 got mine in the mail today, just mixed them all as single flavor testers. The custard cake, shortbread and wafer crunch are great on the nose, lets hope that translates into taste!

So far out of all of them Shortbread is definitely my favorite. I’ve gone through 250ml of this flavor as a one shot and ordered 4oz more. You will really like it

I still stand behind the shortbread. I’ve ordered 4oz more lol gone through over 250ml of it now as a one shot. Hope you like it too

I’m interested in this Shortbread . …now I want more I only have a small 10ml bottle to test.
What % should I try for my SFT??

ok, so because of you guys, I’m going to make single flavor test with (nearly) all my concentrate, better start it now (I’m new in the DIY and still not have to many of them).
you make me busy… but i believe this is the only way to create recipes, how to make food without knowing your ingredients ?

I will definitely be getting this new Shortbread that you are talking about along with some of the other new flavours from Capella.

Hey Wendy.
Watch you on the Tube quite a bit.
Love your nails girl!

Thank you so much love

You definitely won’t be disappointed

I made my tester at 5% and then I added .25 of super sweet and I’ve been enjoying it just like that.

That Vanilla Milk froth is amazing! I mixed 4% (maybe 4.5) with 1.5% Delosi Vanilla cream, 1% Cap cinnamon sugar and .25 VSO sweet . Vanilla milk steamer. I make one occasionally at night for myself with steamed whole milk, vanilla extract and a sprinkle of cinnamon sugar. Soooo good on a cold night!

@Lynda_Marie THAT, looks TOO good to NOT mix up. Do you use actual cinn sugar at the end? And real milk or more concentration?,I want too!!

For my real one I actually drink I don’t use this concentrate. I use steamed/frothed whole milk(with a tablespoon of cream) vanilla extract and cinnamon sugar sprinkled on top. That’s where the idea came from. If you want to make one to drink I use 3/4 cup whole milk, a tablespoon of cream, a dash of vanilla extract (sometimes I add a little almond extract ) after steaming it I sprinkle cinnamon sugar on top