So I create my own recipe where I guess it fills in all the information I need I.e how many ml of nicotine I need etc

What am I doing wrong ?

That sounds odd. Are you able to provide us with the link to your receipes?

Do you have a screenshot of your recipe?

Did you use the ELR calculator? 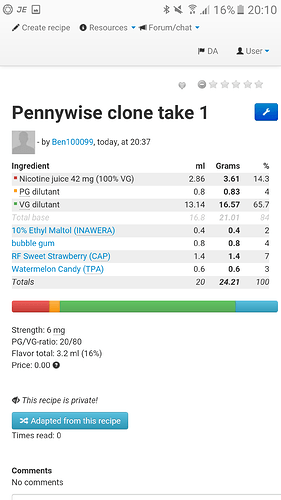 Are you judging the volume by the size of your bottle?

I don’t know if this makes me stupid now lol but I assume that if a 20ml size bottle is 20ml and that works it out to a 20ml would that not fill it up fully haha?

So I guess ye I’m judging it by bottle?

No, your not stupid…and the good people here will never think that. Throw that away, eh?

Do you have a 10ml syringe ? Larger?
Measure it accurately from one bottle to another, and see what you have.
Don’t go by what size the bottle was sold as.

I make 20ml testers all the time, use a 30ml bottle [hundreds of them from the same company]
and the 20ml only fills the bottle exactly halfway.

It is a 10ml syringe and I have a smaller one for your 0.25 measurements

Don’t get me wrong I went for a shake and vape on it and for my first diy it tastes really nice! I think I’m gunna lower the WATERmellon as it is a bit over powering but seeing other people’s on here they didn’t have much luck on their first one I’m proud

I’d measure 20ml water and see how much it fills bottle. I use 30ml and 50ml glass bottles and measure by weight - there is always head space in the bottles. I’ve got an inkling that bottle measurements are up to but not including the neck space.

Next dumb question what on earth is this for 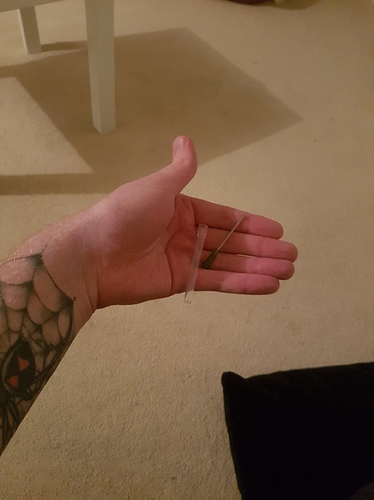 Here is an actual shot of my last order, been buying these exact bottles for a very long time.

Here are some bottles I recently made, and you can see, the safety seal has not been broken.
I make 20ml testers, and they are generally over by 1ml, so these have 21ml in them… 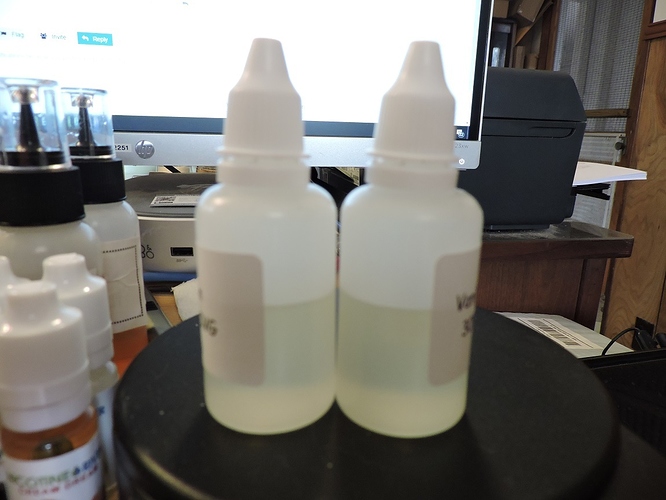 It looks like a blunt needle tip petal. You attach to end of your syringe to pull up liquid

You have been warned

I almost thought I was gunna get ripped into

Them bozo’s are asleep with hangovers right now…you are in good hands…
@anon60225325 and @Lolly are always Ladies that you can trust, helpful, and will always be as gentle as a female Praying Mantis.

That is a blunt needle, not for injections, but for measuring liquids when used with syringes, so you can reach in places the actual syringe won’t fit, and to not get liquid on the syringe itself.
From the color of the hub, as best I can see, it’s an 18ga 1.5". Each color hub is a quick reference to the size gauge of needle it is. It is too small of inside diameter to use with VG, but works well with PG and most flavorings.
If you use one for VG I suggest at least 12ga, which can be found on Amazon, E-bay, etc. in all SS and no plastic color hubs.

P.S. The syringe tip will work on either Luer style or Slip style syringes.
On a Luer, put it on and twist until snug…bet you know how the slip style works, eh?
Obviously, the (clear) plastic tube is a dust cover.

I went for a shake and vape on it and for my first diy it tastes really nice! … seeing other people’s on here they didn’t have much luck on their first one I’m proud

I am very glad you had success, right out of the gate. I have been mixing for years, and I have NEVER dumped any juice. Yes, I have had some not-so-good, but I just threw them in the closet and left them alone…and most were better at a much later date, though some still needed a tweak, but all were vapeable.
The main key is to THINK out your recipe BEFORE you slam flavors together. Think what a pastry, a dessert, a drink, or whatever you are trying to get the taste/smell of, has in or on it. What does an Almond Joy candy bar consist of…and how much of each? What does a strawberry cheese danish consist of…how much of each?

This is a good read below, I hope you will take the time.

And Ben, welcome to ELR!

Do fruit mix liquids straight away " shake and vape"

And can you tell me how any of you steep or faster process ( atm I’m just shoving the bottle lid on and shoving it into a drawer , and shaking when ever I remember )

But any info will do!