Thanks, SD. Important (and concerning) information that you are pointing out there. The “F217” type is (I think) different than the original Teflon construction ones that I had found (with that 100 piece minimum). Sigh. So now I need to figure out where my prospective 8 Oz clear bottles with Teflon construction caps stand (in terms of the ability to make an air-seal). Will research. Off to the “devilish details” (if findable).

So now I need to figure out where my prospective 8 Oz clear bottles with Teflon construction caps stand (in terms of the ability to make an air-seal). Will research. Off to the “devilish details” (if findable).

Yeah, I was shocked when I saw that. I mean how HARD is it, to get the right stuff already !! ??

I ordered some more 8oz. ambers from Amazon with minimal “negative cap reviews”, and another bottle of Argon. I’ll report back.

I am going to email the vendor (via Amazon’s Big Brother internal messaging system) to nail them directly (unless I find something definitive as to “seal or no seal”). May take a few days. Shopping for “esoterics” can be a headache ! It seems that “marketeering sins” are one’s of ommision of potentially negative information. Accountability (in the age of Amazon) is degrading. The reviews are often a zoo of “outliers”. I always try to nail the vendor first in writing as to facts.

I am going to email the vendor (via Amazon’s Big Brother internal messaging system) to nail them directly (unless I find something definitive as to “seal or no seal”).

Looking on the associated Amazon advertisement web-page, I get a sinking feeling that their language is avoiding the use of the term “seal” (not sure if “seal-lined” implies “seal”). Hope that we can “seal a deal”.

The bottle has a white polypropylene screw cap with a polyethylene foam disc liner to secure contents and help prevent spills and evaporation. An additional PTFE (polytetrafluroethylene) facing resists many chemicals, moisture, and temperatures ranging from -400 to 500 degrees F.

Let me know if you have (or are now) purchasing 8 Ounce amber glass bottles from “GlassBottleOutlet” vendor. They do have several complaints about defective caps that will not create a seal (and the lower price on a 6-pack). However, the competitor vendor has few reviews (lousy “sample size”), and they are quite old, to boot. On the up-side, one reviewer stated that when they voiced a protest (I think to “GlassBottleOutlet”), they mailed him no less than 6 new replacement caps, pronto and free. Might need to cherry-pick a few. These “cheapo” caps appear to be a pretty standard item from various vendors (although there appear to be a couple of styles of the insert).

Just wrap some Plumbers Teflon tape around the threads before sealing the cap and call it done.

It seems like no matter which “caps” I look at, they’ve all got roughly 3 star reviews. I’ll have to check which vendor ships them.

Well, it would be good to nail the manufacturer (Wheaton) of the caps that come along with directly as to any product literature available (seal not mentioned in the specifications).

Here is their CS phone (1-800-225-1437, 8AM-5PM EST). They are presently closed. Will call tomorrow, but probably won’t be able to talk to someone who knows for sure, or will commit. Perhaps better to nail the retail vendor via Amazon messaging up-front - so that they will be reliably compelled to cough-up some free replacement caps in case of defective ones.

The Amazon retail vendor for the item is “Laboratory Supply Distributors Corp”. Their “856” prefix phone number is toll to New Jersey (and not toll-free), but they have a button for submitting inquiries via Amazon internal messaging system. Let’s both hammer them as to which end is up, and compare answers …

Similarly, the negative reviews for the same product in 6-packs has several bad “cap experiences”. Ugh …

If you go through a lot of nic, I suppose one could do the same split with a 8 oz and two 4 oz bottles. A 60 ml working bottle works well for me and what I go through.

I didn’t have any wonky phenolic cone seals on any of the 3 dozen I ordered.

My wife has been asking about freezer space of late so I am now using 16 ouncers instead of the 4 & 8oz sizes. I just picked up a case on Amazon for under $20. I have been using Glass Bottle Outlet for a couple of years now, I had a 25% off coupon for them but with free Prime shipping the price of their bottles delivered is less on Amazon than it would have been with the discount code. By the way the caps on this 16oz bottle order are outstanding; I have had some poor ones from GBO outlet before too.

I’m fortunate to have a small chest freezer in the basement, so freezer space isn’t a problem. I use these Harbor Freight plastic ammo boxes to store the nic in the freezer.

Each box holds eight 4 oz bottles, perfectly. The handle folds flat, they stack nicely, and have a rubber gasket in the lid. HF has coupons all the time for the boxes @ $2.99 ea.
I use them to store most of my vape stash. I grab them 5 at a time, when I see the $2.99 coupon. They work great.

Been using the 6 pack Coleman type coolers myself.

Searching using the descriptive terms used, it appears that the mystery caps (that come with these prospective clear glass 8 Ounce Wheaton bottles) are, in fact the same as the “F217” type (that @SessionDrummer found the statement warning about regarding the lack of a reliable air-seal):

Will call Wheaton CS tomorrow to verify. If so, I guess that it’s back to the ambers and plastic cones (which one vendor of similar products stating that the cones are made of LDPE). Wish they made Teflon cones !

Wish they made Teflon cones ! 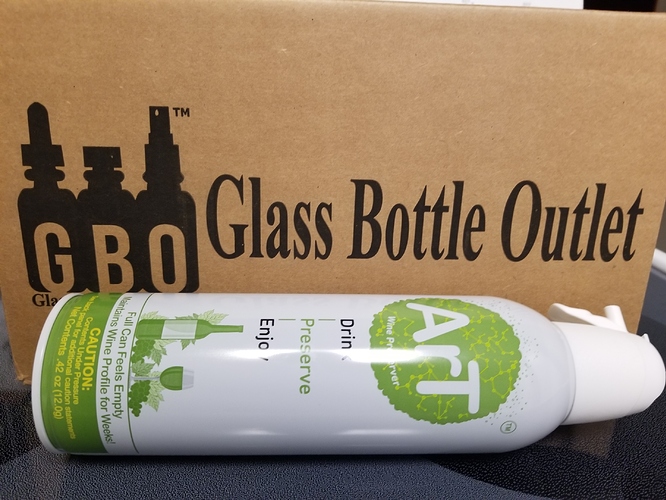 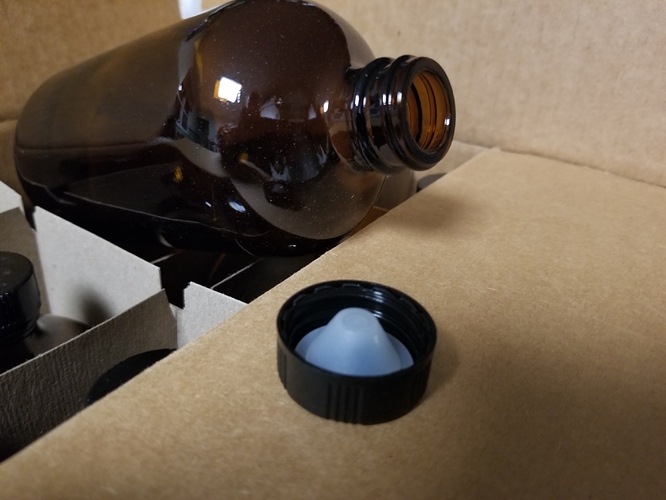 I was pleasantly surprised to be able to get through (in the Wheaton Tech Support department) to a fellow who is knowledgeable and informative (imagine that !) about these two types of caps (the Phenolic with LDPE cone assembly, and the PTFE Teflon-lined caps - the “F217” designator associated with the original once patent-holding manufacturer).

Relative to the quality and durability of an air-seal:

First, the Phenolic with LDPE Cone assembly. He says that (most) of these items work pretty well - and that if they fail, it is generally something that occurs early-on when tightening. Good to know that any defects would (likely) show up early in the process of their use.

Second, the PTFE Teflon-lined items that I have been considering, and which we have been wondering about. He says that the Teflon layer is very thin (a few thousands of an inch). While the Teflon material (itself) may not adequately conform to “hills and valleys” that exist on the glass bottle neck top-surface (which are too small to see/ feel), the layer of plastic backing the Teflon cause the system to work well for making an air-seal. The potential problems with this type can arise if/when containers are transported and shipped. The combination of vibration/shocks and (if/when the container is horizontal) the contents contacting the inside of the cap assembly can (potentially) result in tiny breaches of the (otherwise reliable) air-seal. He was a bit surprised to hear about the Cary Company’s disclaimer (that @SessionDrummer found), stating that this technology did not make an air-seal. We casually surmised that they (Cary Company) are likely covering themselves for all possible usage cases - including transport with vibration/shocks, horizontal positioning of the container, etc.

We discussed the likelihood (or lack thereof) of potential chemical attack over time by the strongly basic Nicotine molecules in higher concentrations on both LDPE as well as Teflon (the latter being quite unlikely). Neither of us have specific testing information, and we casually surmised that it is (probably) the case that at the low temperatures of freezer storage, and when the solution is not often or for very long contacting the LDPE cone assembly, this is probably not a likely occurrence.

So, in the end, it appears that both options are relatively viable ones (if/when not transporting, or removing and then re-torquing the cap onto the bottle a lot, anyway). It would indeed be very nice not to have to worry about any potential air-seal breaches in various (non-ideal, but possible) scenarios.

As well, the “Fulfilled by Amazon” GlassBottleOutlet items (might, possibly) be easier to get extra Phenolic with LDPE Cones (for free) - should any of them prove to be defective. So, that’s the “long and short of it”.