Ok, I need to submit a new nic order. I am starting to run low, well, lowish. I am thinking about submitting an Order through NictoineRiver which appears to be selling “NicSelect.”

I was oringally thinking about another company but some of the reviews over the last 4 months were not positive.

Prior to this order I got my nic from ecx…which i havn’t really had an issue with. However, I like to know where my nic comes from.

So the question is simple. Is Nicselect from NictoineRiver any good (100mg)? Anybody had any issues?

I order my nicotine, VG, & PG from Nicotine River and have had no issues at all.

They get their pure nicotine from http://www.alcheminternational.com/
MSDS & COA is at https://www.nicotineriver.com/pages/msds-coa

Nicselect is what ecx sells. So… its the same

On really? I did not know that. @DonovanECX @ecigexpress. Is this correct? Your nic is nic is nicselect?

Yup it is. Here are all of the vendors that sell nicselect:

I’ve been using it for about 6 months now and it’s good… no complaints.

Oh boy. Thanks everybody. Golly now I need to order some more flavor…yay. I just submitted an order from xyz (name not mentioned) since there were special flavors I needed not carried.

In a side note frank. I tried a lemonaid recipie of yours with a 0.25% touch up lemon fe and I loved it. Well done. Got the second mix with a touch more rassberry steeping now.

Hey thanks. I like that one a lot too. Let me know how the extra raspberry turns out and how much you used. I tried using more and it was just too funky for me… i don’t remember what the percentage was though.

Could be wrong but when i researched it 6 months back coulda sworn i seen ecx on nicselect’s page.

Let me put it this way I traded 360 ml of 100 mg PG Based Nude Nic Armour for 240 100 mg nic and 60 36 MG nic VG based and am happy as a clam. Now bear in mind the PG Fups me Ukc. I manage to tolerate the flavoring in PG but no more than that. I love it. It is my nic of choice above all else. Now I say this for two reasons
First and formost it’s true
Second I have this fantasy where Grant sends me a 55 gallon drum of it. ROTFLMAO

The recpie. Hmmm. I did a screen shot from somewhere. I think it was from Vu.

Maybe. Not even sure. Lol.

As I surf on my cell I screen shot anything that looks good. Then I send everything to the computer. Then I dig in my future recipie folder and go from there. I build eveyrecipe touching up things to my liking. But today I remember the “ffrank” and recalled having that written on a bottle as ffrank lemon rass. Just havnt said anything since I’ve only done one mix.

Now that I think about it, I’m pretty sure I never made this recipe public. And there are no views as of making it public now. Are you sure it was mine?

I found it. It was in a thread discussing how some people feel that lemon Sicily fades as time goes. 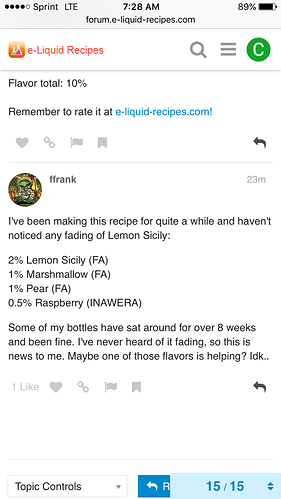 oh yeah… i remember that now. btw i still havent noticed any fading of LS. in fact, that recipe seems to get sweeter and more lemony if anything as it steep.

Also - we really hijacked the shit out of this thread lol.

thanks for the recipe guys, much appreciated.