I received this Berserker V1.5 MTL RTA free of charge directly from Vandy Vape for the purpose of this review. Regardless of this, it will not color my opinion on this review in any way, shape or form. 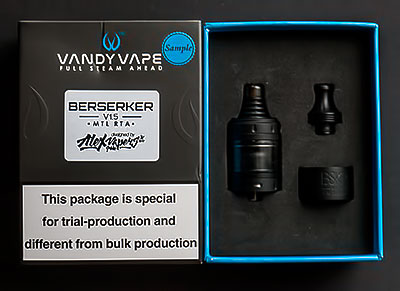 Packaging
This came in a sample box that had a sticker on it that says «special for trial-production» and it does also say «sample» several places on it. So the retail package is going to be something we have seen from Vandy Vape before. I will despite that show the box it came in. 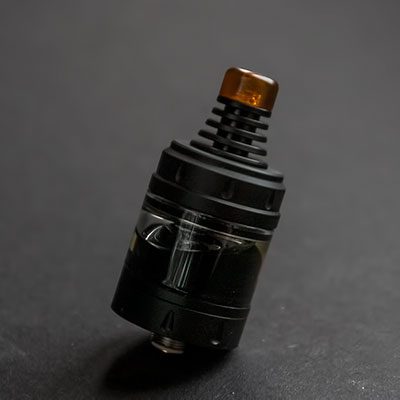 The RTA
It is a 24 mm single coil MTL RTA made in collaboration between Vandy Vape and Alex Vapers MD. This isn’t the first device they have made together and I’m sure it won’t be the last one either. 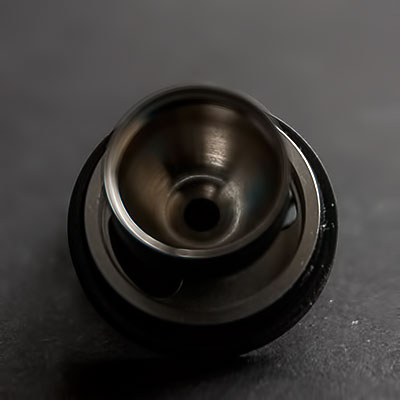 It is a nice looking RTA and as always with Vandy Vape it is well machined and well built and I haven’t managed to find any flaws on it at all. 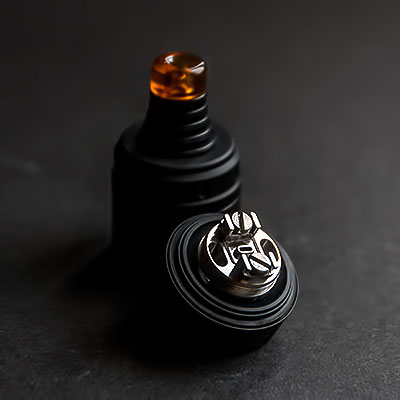 As I said before, it is a single coil MTL RTA and the posts aren’t innovative in any way, actually a bit simple, but they work. You got one post on each side of the deck which leaves the coil sitting in the middle. 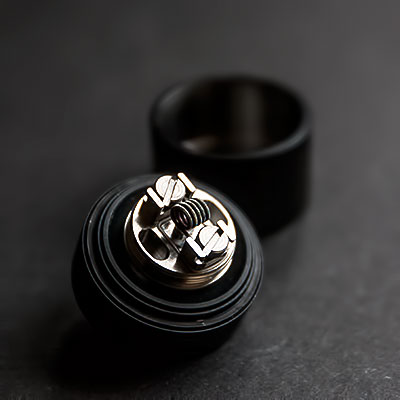 The posts, as they are, work as intended, they do hold the coil nice and snug in place and it is really easy to build and wick, and so far I haven’t experienced any leaking at all, which pleases me a lot. 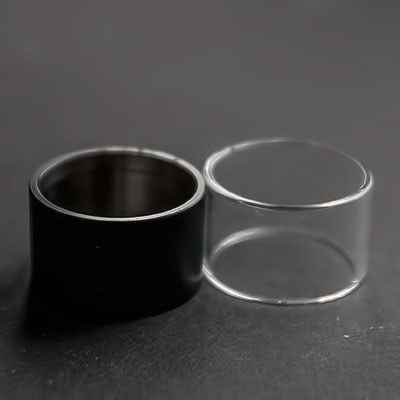 It comes with a glass tank section and in the package you will find another tank section made out of steel in the same color as the rest of the RTA, and in this case that is black. With the steel tank attached it does look good, but it makes it kinda hard to see any juice level at all. Perhaps a price to pay for looks. 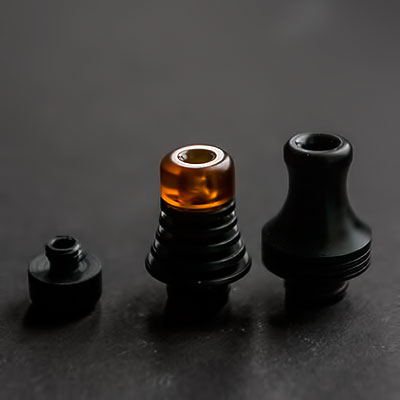 The stepped part of the drip tip is actually 510 sized where it sits in the top cap, the Ultem part is threaded and proprietary and it does come with an additional threaded one in black. It does also have a spare black 510 drip tip in the package made out of delrin.

I have tried it with a few of the Furai 510 drip tips I got from Cthulhu MOD and they all sit nice and snug on the RTA and kinda changes the overall look of it. 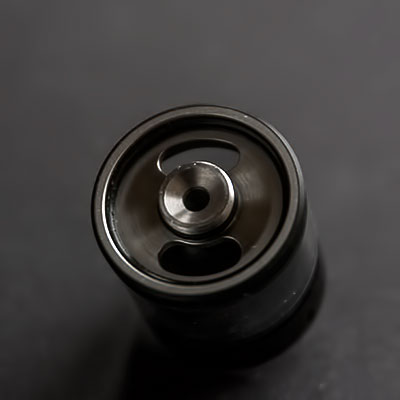 To fill it up with liquid you just take the top cap off and fill it up through the two kidney shaped filling slots on the top. They are big enough to allow you to use Gorilla bottles as well as unicorn or twist cap bottles. With the glass tank section it holds 2.5 ml and with the metal tank section it holds 3 ml, but be aware that you won’t see the juice level with it on. 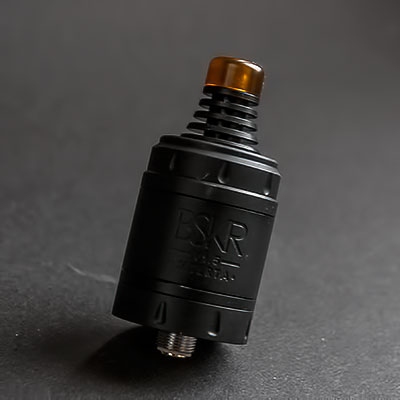 The airflow got 5 different sized air holes ranging from 1 mm, 1.2 mm, 1.4 mm, 1.6 mm and up to 1.8 mm and if you use the largest air hole you got a draw that might be called a restricted DL. The smallest air hole is definitely a MTL draw and I would say a restricted one as well. It shouldn’t be any problem for the MTL vapers out there to find a setting to their liking with it. 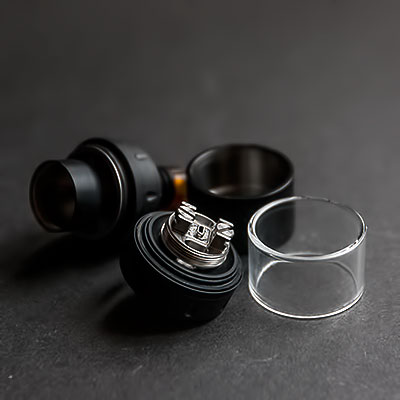 The airflow adjustment ring is easy to move around to adjust the airflow, it’s not like it’s moving by itself, it does have some resistance to it and I like the feel of it. The airflow itself is actually what I would call buttery smooth and I haven’t experienced any noise in the time I have vaped on it. 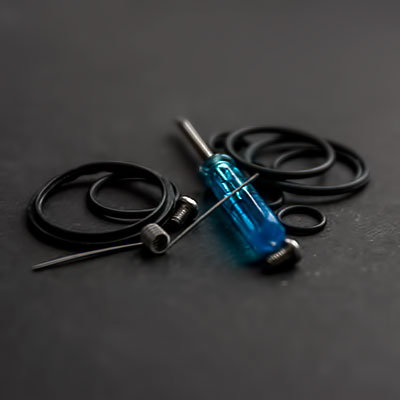 Assessment
It is a well built MTL RTA and an upgrade from the first one since this one is named V1.5. I never tried the first one so I can’t do a comparison between the two, but I know that this one is quite good, and I am sure lots of MTL vapers out there will like how this one performs.

Can I recommend it to others?
If you are into MTL vaping and in the market for a new device I wouldn’t hesitate to get this one. It does deliver on flavor, meaning that you get good flavor out of it. It is well built and it doesn’t look bad either.

You will find it here
Berserker V1.5 RTA

Thanks for reading this far and Vape on!
Norseman

I have the clone kayfun prime because i do mtl early on, but now (at least for half a year now) i prefer restricted dtl. It’s just not satisfying enough now, somehow…

Regardless, this is a well written review. Thank you for posting this.

MTL isn’t quite my thing either since i do like my dual coil RDA’s. But it is nice to be able to try something different out at least.

@Norseman Thanks I like MTL better, Im sure the largest hole would be plenty for me since I close off my RDA all the way then bump it open just a tad. when using that. The Flat Black and non see though looks so cool. This might be my first RTA I try.

sounds like a nice one.
i can’t even consider not seeing the level as it’s ones own choice to go all black on it, more of of a nice addition to the package.
thanks for a great review man keep it up

I have the clone kayfun prime because…

I have the KF Prime Clone as well, but for the steel tank option; great for rough work conditions. Alas, the airflow is not to my liking… it works in a pinch though. I was holding my breath that the airflow on the new Berserker V 1.5 was going to be larger than the KF Prime… sadly, it is not.

Thanks bro, guess you’re right about that.

I was not a fan of the original Berserker, but this one looks to be an improvement. Although it remains to be seen whether the top fill works on this one, or whether it also needs to be bottom filled to obviate flooding, like the V1
Thanks for your informative review @Norseman

Thanks man. It hasn’t flooded on me when i have filled it up.
A trick on tanks that might flood is to start threading the top cap on and then turn it upside down while tightening the top cap, all in order to avoid flooding to occur.

Yes I agree, however imho if it is designed to be top fill, it should not require a work around like having to flip it when tightening the top cap. Just saying.

That’s true. But if shit happens its a good idea to do, to avoid unnecessary cleaning.

Yes I agree, however imho if it is designed to be top fill, it should not require a work around like having to flip it when tightening the top cap. Just saying.

I think hes just saying if it does get overly flooded you can remove some of the juice down below with a quick flip and then fire it off then twist it back open and continue rocking it. I like it cause it seems to be great for flavor and I never liked the glass look on RTAs for breakage reasons also, thats why i dont have one yet.

Great review @norseman. I was gifted a previous model Beserker and am wondering what differences there are between it, and this new model. I know you haven’t used the previous version, but wondering if anyone else has.

I know you haven’t used the previous version, but wondering if anyone else has.

I watched other reviews on v1 clones and v1.5. Only thing I got out of them other than looks/aesthetics, was the mouth pieces were fanned for better heat dissipation, but still not sure if that was ever an issue with v1 in the first place… was it? As long as no one says they leak i’ll still consider it

From what i have heard the leaking was an issue with the first one and from what i can tell that issue is fixed. Or should i say that i haven’t had any leaking as of yet, other than that i got no idea what the changes might be.