Norseman's Review on the Vamp RDA from 313 Innovations

I received this RDA free of charge from ZP Vape in France for the purpose of this review. Regardless of this, it will not color my opinion on this review in any way, shape or form. 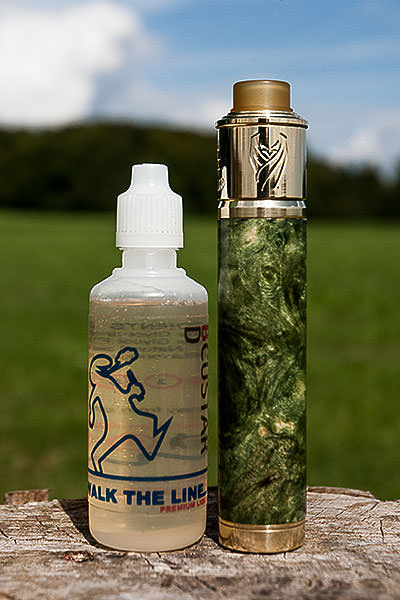 Behind the scenes of this review
When I got this it did arrive flawed, flawed in the sense of a trashed 510 thread which basically made it impossible to use for anything else than decor. This was back in August and I contacted the company that sent it to me and to their horror the rest of the Vamp RDA’s they had in stock had the same trashed threads that mine have. 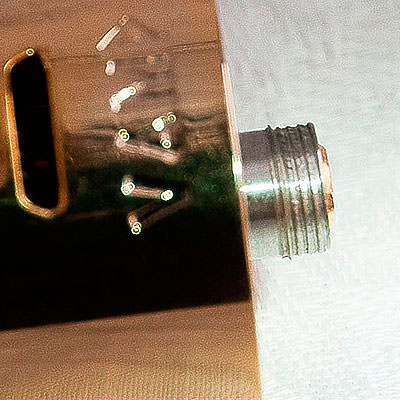 I decided that I would contact the manufacturer 313 Innovation and try to make them send me a replacement as soon as possible since I was doing a review on it after all. I was promised a replacement immediately and to my surprise nothing more happened despite me contacting them several times and when I finally basically threatened to post a review on an RDA I can’t use and where I also would describe how poorly they as a company have treated this whole fiasco they reacted and a replacement was sent out. And here we are more than 3 months later and I have just received a replacement that I actually can use.

So what can I say…well as it is, I can say that 313 Innovations have themselves a real issue with quality control, having released a product with such a big defect on it and i know for a fact that the company that sent me the first one has another 40 Vamp RDA’s that are unsellable and that they haven’t gotten any replacements despite the fact that they also have been in contact with 313 Innovations that makes the RDA and they also have been promised new ones instead of the faulty ones. I can only imagine (not knowing) that these 41 are not the only ones with the same issues. 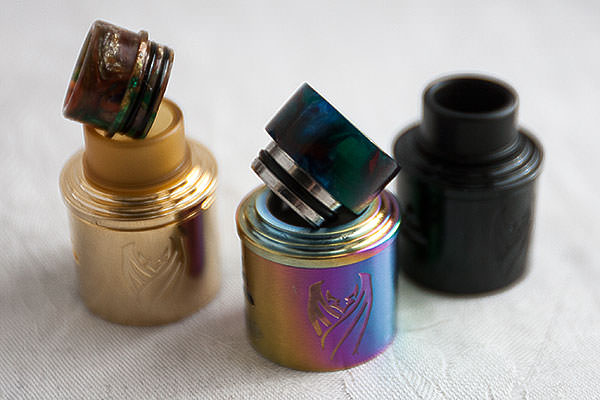 And lets be real here, a product priced this high should be perfect in every aspect of the word – because this RDA will set you back 95€, which converted into $ is around $115. Yeah you read it right, $115 and the first one didn’t even have 510 threading, ridiculous right…

Even though I have gotten this replacement among with other things to smooth over the bad one i got that slipped through the Quality Control and also the bad Customer Service i received I felt the need to inform all of you that read my reviews so you as well have all the facts on how this particular review went down and i’m doing this just because honesty as a reviewer is the only thing that can give me any credibility while doing what I do. 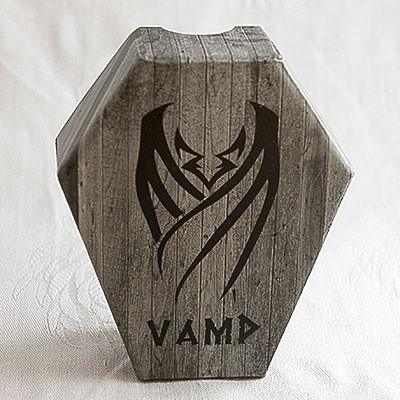 Packaging
This one came in a package looking like a coffin with the Vamp logo attached on the front. When you open this box up you will find the rda sitting there in a cutout together with a goodie bag containing a couple of o-rings, 4 grub screws and an Allen key. 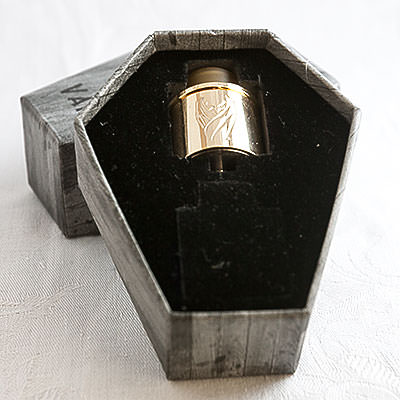 The RDA
This as many others is a 3-piece RDA with a side airflow designed as a triangle made out of 3 bars and it is only supporting dual coil builds so single coil users will have a tough time with this one.

I originally got the Gold plated RDA but when the replacement arrived I found myself with top caps in all the colors available such as Gold, Black and Heat Treated and I must say that they all look really good. 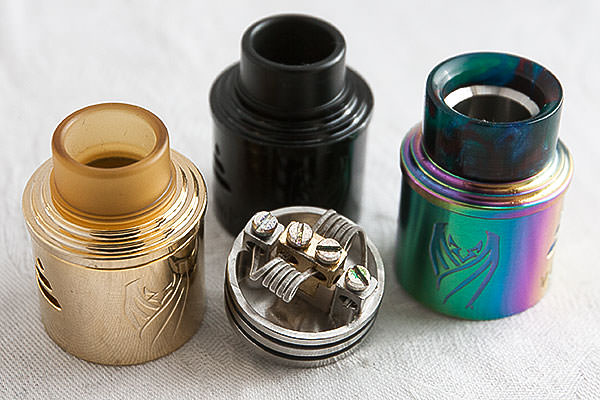 The engraving and the overall machining looks good enough but the top cap on the first gold top cap doesn’t fit that well into the airflow sleeve and needs a little fiddling to put together. On the new top caps that I got with the replacement the fitting is much better and no fiddling is required to put the parts together. 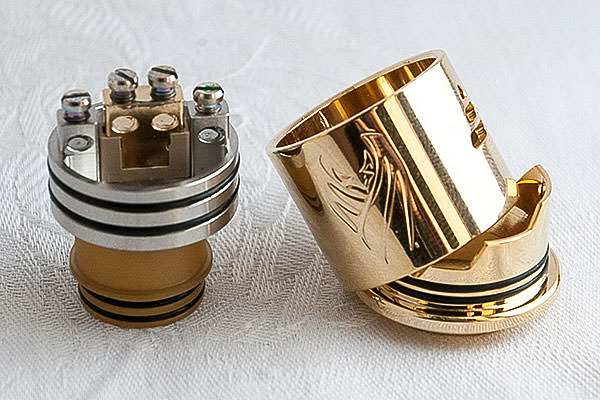 One thing that will become an issue with it is when you drip since the isolation on the positive post close off the space between the negative and positive post which in turn will make sure that no liquid can run freely from one side of the deck to the other. 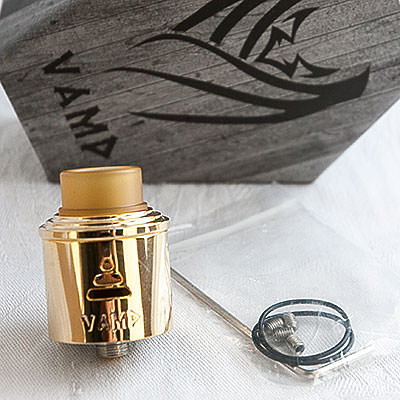 This means that you need to remember to drip on both sides when dripping which shouldn’t be an issue as long as you remember to do so. A good thing is that it didn’t come with a squonk pin since I can’t see how that would work out good at all considering how it is built. When I wrote this review I have seen that 313 Innovations have been promoting the new Vamp with a squonk pin and I truly hope it works as it is supposed to.

It is easy enough to build and since it does have flathead screws it is easy to tighten down the legs and make them sit firm. It got a nice deep juice well so wicking this isn’t any problem at all and it can take a fair amount of juice as well.

As many of the exotic RDA’s on the market this as well has a proprietary drip tip which means that probably no other drip tip you already have will fit on it. I truly look forward to the day when we get an industry standard of 510, 810 and whatever the next step might be in order to make it easier for the customers to put another drip tip on their RDA’s whether it be a custom resin or just another standard drip tip in another color.

The airflow is 3 bars made out like a triangle and you can use it in 2 ways, 1 way is to close of one bar at the time or as the second alternative, closing it off from left to right, and either way works good and is real easy to handle. While I have been using it I did have it closed off to just the lowest widest bar to get the most flavor out of it. 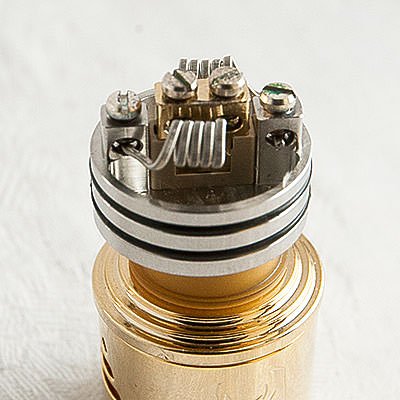 I used Fused Claptons from Jondamon (https://www.instagram.com/coilbuilderj_v.b.c/) and they are as always really nice coils that are well built and they definitely help out making the flavor surprisingly good in this Vamp and I didn’t expect that to be honest and as I always am when I test a new RDA I am using my own creation that I know better than anything and it taste as it should.

A disappointment with this RDA is that I wouldn’t say that it is hybrid safe, the 510 is not protruding enough in my opinion to be used on any hybrid mechanical mods. If you get one and use it on a mechanical mod I would say that you do that on your own risk since it could happen that it short out on you with a battery ventilating or having a thermal runaway.

Another thing is that even though it got a functional 510 thread this time around it is a bit crunchy and it takes some fiddling to get it on some of my mods. The way I see it is that the threads aren’t that good and if I compare it to other high quality RDA’s it truly got a poorer quality for sure and there is room for improvements. 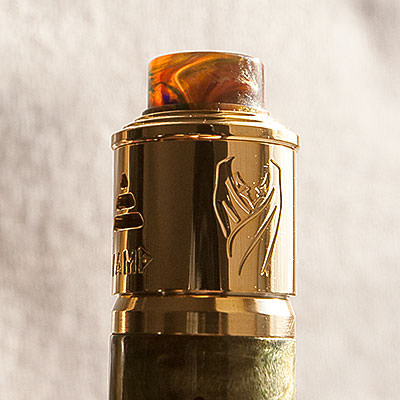 Assessment
After finally being able to use it I must say that I like it despite the cons it has. Not being hybrid safe is a big con in my book and it would have been real easy while designing it to make sure it is just that. Another thing that is a con is the fact that you just can’t squeeze liquid down the middle since that insulation closes off the deck not allowing the liquid to run freely from one side to the other.

The biggest con however is the price and pair that with the quality issues and that makes this to be non attractive. Personally, if I hadn’t been given one to review I would never shell out this kind of money and definitely not knowing about the issues with the first one received.

Can I recommend it to others?
This is a tough one. It does provide good flavor but looking at the cons, proprietary drip tip, quality control and such paired with the high price I feel that i have to let you guys make up your own mind on this one…

You will find it here
Vamp RDA for 95€

Thanks for reading this far and Vape on!
Norseman

Thanks for the review.
This definitely will not end up on my shopping list!

thanks for the heads up, this one is going on the naughty list.

Thanks bro, much appreciated as always

Thanks for the honest review, Norseman! Sounds like they have some shit to sort out…

It really is a pretty rda, its too bad about the problems (especially the bad CS).

Nice review. It is such a shame overall since u’d expect a whole lot more from the Phillipines. I had just watched a ytube review of the dreamer mech in which he enjoyed it alot w/ a vamp atop, i hope he is ok…They deserved to be slammed on this besides being a terrible design that CS would really be more of a headache for the average joe that actually looks forward to using it and saved their pennies to buy.

Thanks for the in depth review and telling it like it is.

Sure looks good though, but ooh the price and the cons… Very thorough and straight up. Thank you.

Thanks for the review. Sounds like a good one to stay away from.

Honesty is all we got when we do the reviews don’t you agree…
It sure is a nice looking rda and despite the cons i kinda do like using it since it provides good flavor.
Thanks

I have heard from a guy that deals with vaping products out of the Phillipines that the quality on stuff has gone down and that companies over there need to up the game quite a lot.
Thanks for commenting.

Thanks for commenting man

Thanks dear. Yeah the price needs to be lower on this product thats for sure.

If it would be priced a lot better it wouldn’t be half bad, it delivers on flavor and it is really good looking.
Thanks man

I’m with you. Looks sharp and I’m searching for flavor, but wow the form, fit, and function were way off the mark with what you received. When you mentioned the price I almost fell over.

Good looking out @Norseman, told me all I needed to know about it. Much appreciated bro

Thanks for the comment man.
Even though the review might be a bit negative on the company and the RDA it still is one i will use since i kinda like it despite all its cons.

I wouldn’t however shell out that kind of money to buy it since the company needs to up their game a whole lot to get the quality to match the unreasonably high price.