Does anybody know anything about this tank? I found a couple of sites that are selling it, but I’m not sure how reputable they are…
https://www.vaporworld.biz/mods/ohmega-alpha-30mm-bft-tank/

It amazes me how so many things out there are still to be discovered!!
I just bought both the 22 and the 30mm!!
Yippee!!
More new toys!
Thanks @Caddy!

In all this browsing, I also found out that the Triforce tank has a 30mm tank… Did you know this @pro_Vapes?

I’m glad you like it @Whiterose0818! Where did you order it from? The link above? Let me know what you think of it when you get it! (if I can wait that long)

@Whiterose0818 I’m not familiar with Vape this, could you post a link?

I just received my first order from Vapor World on this Friday. I bought the BFT and the Kangertech 200W. Shipping time was delayed by 2 days. Not the company’s fault just crappy USPS. So far so good. I also have the 30 mm VCMT I got from Eciggity. Enjoying both tanks.

@Big_Woo thanks for the info! I was going to pull the trigger, but wouldn’t you know now they are out of stock in both colors… “I should just shoot first and ask questions later!” lol

I did find them in stock at Orgin Vape , I got the 30mm on order!
I do like the looks of them.

Ohmega Alpha BFT RTA is offered in 22mm or 30mm. 12ml juice capacity means your vape can survive away from society, should you need to head out on your own.

Only problem I see is I want the black version and it isn’t specified, so I’d assume it’s the stainless version… I’ll have to look again tomorrow on my computer, could just be my phone…

I assumed the same Caddy! I hope it is silver but it doesn’t state the color that I could find.

i’m not completely sure that black is available…i received a gun metal grey one…the 30mm tank is a fuckin beast! watch a couple of vids on wicking this thing or you might be making mistakes…i watched 3 vids and nailed it first try! i coiled it with the 4mm ID clapton coils they sent with it.i did pull them apart a wee bit before i mounted them.
today i will be coiling and wicking the 22mm version.

EDIT: i forgot to mention…the 30mm: when i first got it running, i took 3 massive pulls off of it and became slightly nauseous…thats how strong this thing hits.
it ohmed out at .3 and i set the wattage to 94 and the voltage was something like 5.6…MONSTER!
oh, and i set it on the Wismec Roo-Loo
theres a video out there of a guy that put one of those 510 heatsinks under the tank with a protruding center pin and then mounted it on a noisy cricket!

That was the one I’m wanting @Whiterose0818… Thanks for the review, I’m pretty set now on getting one, I have a Griffin and can only imagine how awesome the BFT is other then having to Diy to afford filling the thing! I’ve seen it hold between 10-12ml which is awesome. One of the only cones for the Griffin for me is that I have to fill it like 5-6 times a day! Btw they might be oversized but the coils it comes with are advertised at 3.5mm I’d… Thanks again!

Thank you for the info!

Got the BFT in today, Thank you @Whiterose0818 for the info.I did watch a wicking video and all is good !
Lovin it so far ,filed with some lovely PB custard! 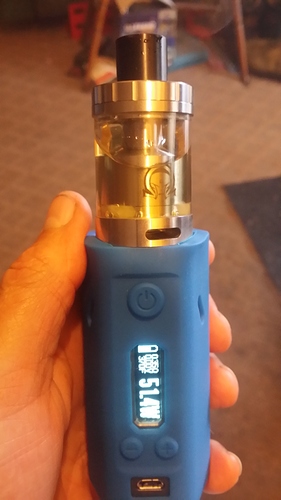 So you see how it could have gone wrong, right? Always glad to be of help!!!
What kind of coil/resistance did you put in it?