First day out with my DIY unicorn milk and two separate people commented on how good it smelled.
Pretty strange as i haven’t had that happen once in 8 months vaping high priced designer juices.
Made me happy and just thought I’d share.

Yeah, people always look at me and go what the hell do you have in there. I just breathe another cloud and say you tell me. If they guess it I know it is good.

Some jerkwad did the cough fit 2 weeks ago when I exhaled, I’m overconsiderate in public and hold most of it in. His wife looked away when I looked in the direction though. Public Psychology lesson I guess.

Usually, I just get the look of “OMG, look at that old bat chucking those huge clouds”. I just give a very large grin back.

I guy I make juice for got pulled over by the law because another motorist told them he was hitting a bong in the car - he had his aromamizer plus on a Limitless Lux 100% vg .

Maybe we should start advertising vaping as a way to quit the evil weed. There’s something extra taking a hit from a joint that you don’t get from just smoking and I’m not talking about the high, because it is something I would crave even when I was high already. DLH vaping gives me exactly that. I used to be stoned most of the day, but not since I vape, just a little before sleepy time is all.

i think it funny as hell at the casino when the smokers give me dirty looks or get up and leave , as their smoke is hovering through the entire place and ashes all over , i barely vape when im there and always blow my vape upwards so it doeasnt cloud over the screens

Vaping all day in my office… Most people that walk in ask what kind of cake or cookies I’m baking. lol

I’m always mindful when vaping in public as I know there are those who take exception to the clouds never had a problem until a couple of weeks ago whilst waiting on a train.
As usual I stand outside the station away from people but the wind caught my plume and it strayed towards the platform where I watched this middle aged man take very extreme measures in trying to avoid the almost extinct vapour cloud, by this time it was very minimal in density, not that it was in any way a big cloud to start with, I had a laugh to myself at how ridiculous he looked in his actions, and fellow passengers also looked bemused by him?
Anyway he started to snarl in my direction and before I knew it he made his way towards me shouting all kinds of abuse! I like a quiet life but I can be no shrinking violet when push comes to shove.
I asked him what his problem was?
His reply was that my ‘smoke’ causes cancer and he now felt he had to go home to change as all he could smell was smoke on his clothes???
I pointed out I wasn’t in the station but in a public place well away from people and that unfortunately some vapour strayed his way due to the wind.
His reply was what do you mean vapour? It’s not vapour but smoke and it stinks like strong cigars?
Strange, I was vaping a lovely black currant at the time which many non smokers in my workplace love the smell of! LOL

my brothers girlfriend got pulled over for the same thing when vaping a pico and nautilus. smh 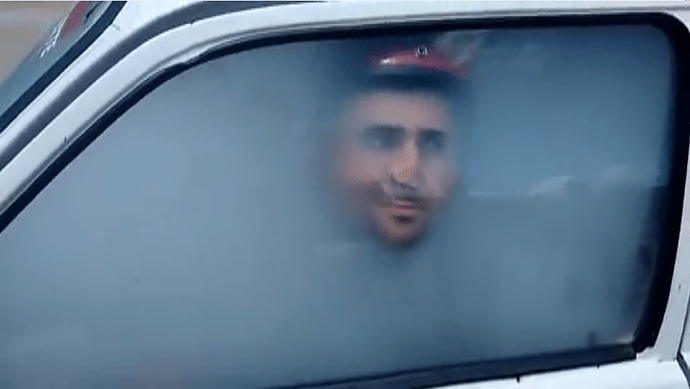 is he wearing a helmet?
…i guess i would to if i had to drive in low visibility fog that dense.