I’m quite new to vaping, and since i started i’ve been looking forward to mixing my own recipes and trying out some of the most popular ones.

Yesterday i went to the local pharmacy and got myself some VG and PG, however i’m unsure if this PG is usable or not.

Is the 0,05ml NaOH normal on PG ? Most of the stuff i find online doesn’t have proper information on it. 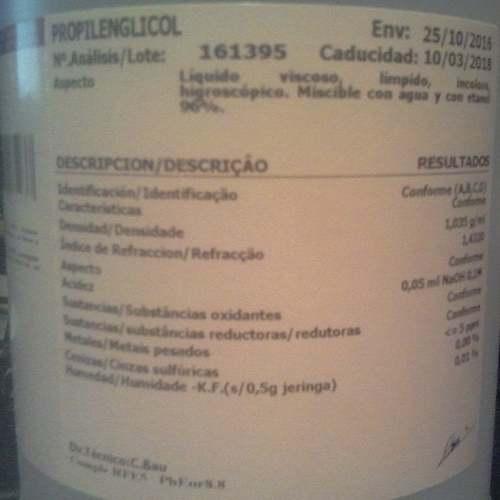 I’ve already mixed a couple of small batches but haven’t tried them so far.

Thanks in advance for anyone who can clear this.

Try and see if they have a "More Information " area on the makers or bottlers website as most companies do that instead of adding all the extra info on the label. 2nd is make sure it states, Food Quality and a USP part on the label.

Hi,
On the bottom it says it complies with PhEur 8.8 which is the european equivalent to USP, it’s pharmaceutical grade.
Online I’ve found very few PG labels that go into this much detail but a couple of “USP” ones also had 0,05 ~ 0,10ml NaOH on them.
I wanted to know if this was common or not because inhaling NaOH doesn’t sound like the best idea, even if i’ve done worst for many years.
It is a tiny amount but it made me curious if it was common across available PG.

Ita only a small concentration of sodium hydroxide, but it still weirds me out.
Ive never seen any PG that is BP/USP grade stating that it contains NaOH before… That is not to say that it doesn’t though.

Commenting as I would like to see what else comes out of this thread.

Of course, on the wiki page there is a nasty picture of someone’s hands with chemical burns. But let’s just do the arithmetic

Notice on that label it says 0.1M after NaOH? That means it’s diluted 1:10, so actually there is only around 0.005mg NaOH in each litre of PG.

Permissable exposure limit (PEL) of NaOH in air is 2mg per cubic meter. Each lungful then would have about 0.012 mg of NaOH. Dangerous levels are 10mg/m3, or 0.06mg per lungful.

So yeah, even if you vaped the whole 30ml in one massive lungful, it is still 266 times under the recommended (ie “safe”) limit for continous breathing of the stuff.

I only buy from e juice vendors. I understand one can buy vg pg and some flavors at Walmart ect. But I feel more secure knowing my supplies are directly engineered for vaping.

@WiSK
After some more research i don’t believe there’s actually NaOH diluted in it, i believe it’s refering to an acidity test.
If you’re also curious:

Even if there was i was just curious about how common it was, i think the amount is so small it wouldn’t be relevant.

@Laura5
Even though i just started, i dont really trust most e-juice vendors, the labels are massively incomplete and traceability is close to non existant. I much rather get VG and PG from a pharmacy and have proper information on what i’m actually getting.

Thanks for all the replies guys.