First, as a new guy to vaping, mixing, and to this site, I want thank the owner of ELR and so many contributors here. What a great resource!

On with it…
I made a recipe that included 7% Pineapple TPA, and daily for four days steeping, the mix would develop a thin oily film on top. Inverting the bottle once produced those familiar oil-in-water bubbles.
Also, the mix, unlike any other I’ve made, remained cloudy throughout.
This should have been a warning :] The recipe has 2% Caramel, and the oil film might match that volume in thickness, so I just figured I’d just shake real good before loading the tank, and keep the fluid moving while in the tank and warm.
So I give it a try, after 4-1/2 days steep, in my Innokin iSubV tank.
The mix is great for a first run, and I vape it all day, leaving some in the tank overnight.
After 24 hours, I get my first experience with a dry hit. … Man. … I mean… Man!
Thinking the coil is fried (tho ohms still read right), I replace the coil. Few hits later, same thing. Nasty.
Mod is bad! … Nope. Put on the Crown. No problem.
So it’s not the mod, and it’s not the coils; all that’s left is the tank.
The iSubV has an internal spring-loaded valve at its base, that closes when you unscrew the drip end of the tank. As part of the valve, there is what appears to be a plastic disc that seals off slots in the tank base.
My tank, upright, with the drip cap on, and the base and coil off, tank full, drained no liquid, when it should pour out the bottom.
On close inspection, from below, actuating the valve by hand, I notice the plastic disc, which I think should be rigid, instead more resembles jelly. When the valve is opened, a little juice is momentarily allowed through, then this gelatinous substance that was once a disc, flaps back to close the slots, thereby starving the coil.
Live and learn, I suppose. I knew the warning on the TPA Pineapple about cracking/melting plastic tanks, but mine is glass, so what’s the problem, right? Never thought about its effect on the tank’s internal components. 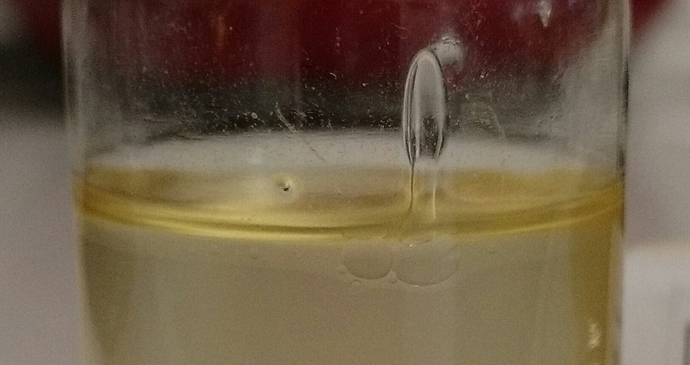 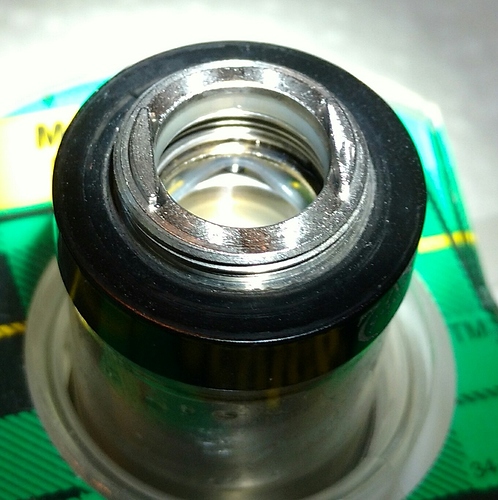 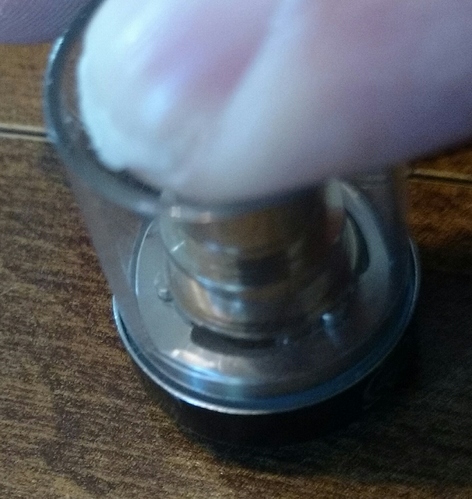 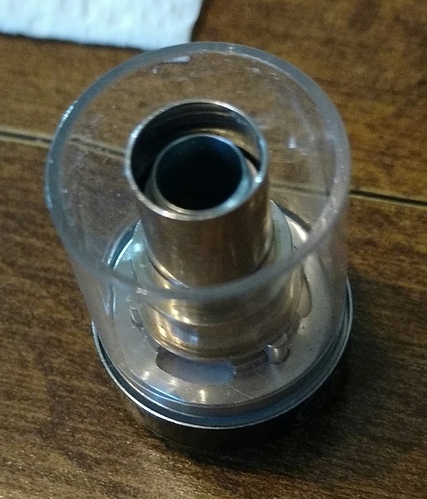 The only think I noticed here was this: I was wondering if that flapper is actually not plastic but silicone? in which case it may or may not have melted from the pineapple. as far as the oily film i recently purchased a dozen bottles and rinsed one to test the cleanliness and volume and i noticed a oily film, so I washed the set of bottles.
Silicone is what is used for the one way airflows in scuba apparatus and might look like melted plastic.
What joel is seeing is some foreign liquid has contaminated your tank. I’d clean it all up and see if its functional.

I agree, Joel has spotted some foreign liquid possibly of the “semen” variety inside the tank, its shape reminiscent of the vessel it has traveled from…

Give that a real good clean before you vape again!

You need some of this Cosmic Coil and Tank cleaner, I get it down at the Bishops farm, they keep it hid out in thaeir storm cellar. AND Ifin the plastic survives this, that pineapple can’t hurt it atall’. The picture of the juice is in the bottle, before it ever saw the inside of the tank. No way the juice was contaminated. Mixed it in new bottle, the same kind of bottle where I’ve mixed several other recipes, without the layer of oil.
And the tank has worked fine for more than a month, until this juice went in.
Thanks :]

TPA pineapple is crazy strong. i use 2 - 2.5% in a mix and it’s plenty and could even drop that down and it would still be fine. as for the flavoring floating on top, it usually means the flavoring is not compatible with the VG, which is a terrible solvent. with lower % pineapple thoroughly mixed with VG and maybe 1% distilled water, the floating flavor should disappear. i have never had an issue with tpa pineapple floating at the top but have with all tpa blueberry and spearmint(super crazy strong) if this doesn’t work, a 70%VG and 30%PG mix should allow the pineapple to mix.
as far as the plastic melting, it seems like too much flavoring could have been used along with floating flavor due to poor blending. i thought most rubberized tank parts were made of silicone as well except for the drip tip.

Pineapple (TPA)
In order to use high levels of pineapple steep/breath/shake until the mixture is no longer cloudy. Then steep longer :)…
IMO pineapple is fine <5 in a mix <8 solo and can be used as high as 15 with a steep of about 45 days. The flavor is so volatile it will actually seep out of the bottle during steeping so I wrap a towel around the glass bottle. It’s delicious at high levels w/ high nic but be sure to use glass tanks and storage bottles only! A mix I made 7 days ago mixed at 5% is still cloudy but starting to clear, I don’t see “film” but actually tiny bubbles that float to the top and stick to the glass and themselves, and they are dissipating. A SF test I mixed on 7/3/16 at TF=16% Nic=11mg 50/50 is crystal clear no reaction with the nicotine, It has little aroma but really strong sweet pineapple taste, and a fine nicotine buzz

Thank you R113 and Cosmic for taking the time to reply.

I didn’t know that Pineapple TPA was so strong. It sure came out way on top in the flavor, though. :]

Not sure if the layer on top is Pineapple at all. Had originally thought it was Caramel CAP, due to the thickness of the layer, relative to % of caramel used.

As to blending, the mix is roughly 30/70 PG/VG, given a 15 minute warm rice bath, then shaken in my homemade jigsaw rig for 3-4 minutes. Nice and frothy before going to steep.

But this mix I did not let breathe, which I think has turned out to be critical here. This, and the obviously inadequate steep time (4.5 days) before loading in my tank for the first trial.

I’ll make sure too, to use glass while tinkering with the mix further.

I am still a bit confused as to what to breathe and what not to breathe, and for that matter, how long to breathe if I let it. Now know about letting flavors with alcohol breathe, but do not know for how long, or what effect that will have on flavors in the recipe that are not supposed the breathe.

Here is the blend (which I probably should have given to start with):
“Pineapple Flip” (A woefully inept attempt by a newcomer to mimic pineapple upside down cake)
6mg Nic (48mg in 100% PG), 19% total flavor
%s: Pineapple TPA - 7; Cherry FA - 5; French Vanilla CAP -4; Caramel CAP - 2; 10%EM TPA - 1
Did not want to make the recipe public until it actually worked (and didn’t melt the tank valve - haha)

hmmm, you could pick up a magnetic stirrer and some magnets. amazon sells them fairly reasonable. https://www.amazon.com/Duda-Energy-mags-Aluminum-Magnetic/dp/B005F7R8Z8/ref=sr_1_17?ie=UTF8&qid=1476674039&sr=8-17&keywords=magnetic+stirrer

thing works great if the liquid is medium hot

for easier mixing, make your (250ml “0” nicotine example batch) in a 500ml or 1000ml glass griffin beaker, set this beaker inside a sauce pan with hot water. heat this on medium low until glass is somewhat hot yet touchable. this is like a double boiler. once the liquid is hot enough and thin, transfer beaker to magnetic stirrer. start low power on up to high slowly to avoid the dreaded skipping magnet inside the beaker. you should have a large whirlpool. let it mix for an hour or so and putting back into the hot water occasionally. transfer to a glass or plastic container with cap and let steep for a week or three plus? once this has steeped to your liking, pour into your bottles and add your nic.

there is nothing in your flavoring or amount i guess that would point towards incompatibility with the solvent. if the flavoring has not homogenized with the solvent and is floating, steeping will not help anything because all the goodie is on top. i would try for at least a 7 day steep. with the vanilla and caramel on top of the fruit, adding 1-2 more weeks wouldn’t hurt a bit. not sure if this helps but its all i have