Please make me good at this xx

Hi. I’m From the U.K.
I have 6L of 72mg nic in my freezer from 2015 good foresight as its now like rocking horse shit.
I used to dabble at DIY but just had a handful of jumbled flavours from rushing into it with no real clue.
I traveld to new Zealand for 2 yr for work and went back analog.
I’m now home armed with my stash of nicotine and a real enthusiasm for DIY (took 2 days to ditch the Stinky’s after I returned).
I have put an order in for way too many concentrates, but this time they are the result of hrs and hrs of research, and should work together.

I plan to learn the flavours individually as you must do to get good. (pics to follow how I intend to do this) any praise or criticism helpful and appreciated.

These pics are literally my idea as a way to test lots of flavours as quick as possible.

I am mixing 2ml pg + 3ml VG with 7 drops (roughly 5%) of all flavours unless I know 5% is way too much like with creams or graham cracker etc, those I will do at 2%.
A bit unconventional I know but I am mixing into baggys to save needing 60 odd bottles.

Nice to meet you 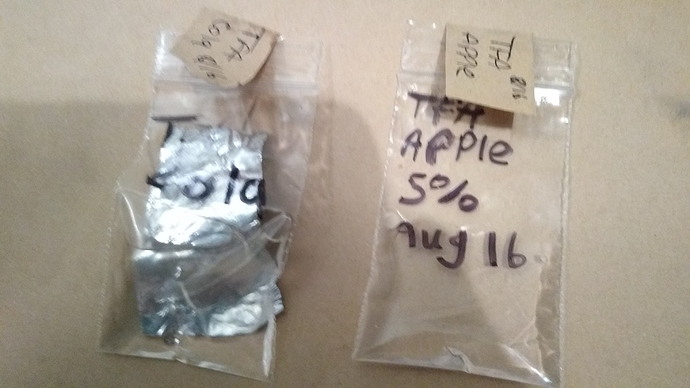 First thing I would do is properly list all of my flavors in the my flavors tab on the recipe side, then I would read everyone else’s notes, I would also do the single flavor testing, everyone tastes things differently. And put your notes there as well. Also get a scale and mix by weight.

Im doing all those things… I’m mixing big batches by weight I’m loving tfa cinnamon red hot on its own to keep me going, weighd. 5ml is easier by syringe.

Taste notes I have been reading. But like you say its personal, that’s why I’m testing each one like I am in 5 ml batches (no nic) over 3 months and taking my own notes… Big job ahead but if I’m still here talking to you in 6 months I might be posting new recipies along side you. 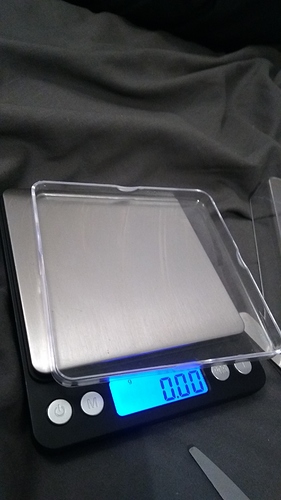 I will copy the way others take notes (noted) that I will look further into thanks.

I’m just being as well, I jumped in backwards, I bought a starter kit and when it arrived I said ok now what? And found ELR! It’s so awesome here, the people are all so wonderful and kind, i have the exact same scale but the base is silver!

Mixing on a budget is how i started and still am pretty frugal. I like the baggie idea but would suck to get it to reseal every day u open her, air is the enemy especially with fruit. I initially used old pill bottles and luckily my mother is a bit of a horder. I then and still after a year reuse plastic commercial bottles from my brother who buys, so if u know or still buy, save those lil bastards. There is absolutely nothing wrong w/ mixing by volume and until recently did, only difference in it for me was the clean up w/ not having to rinse each syringe out. The flavors in small bottles usually come w/ tips, if u mix by volume u would remove those, but save them in case u do get a scale.

Looks like you’re off to a good start. I like your baggie idea. Best of luck to u on your journey. Welcome to the rabbit hole

Got a scale, as mentioned above, I do my 30-50ml batches on them. I just find 5ml very easy with syringe as weighing that small would be a lot more work than just 2ml + 3ml + 7drops x65 which is how many flavours I bought lol.
Budget not a problem as a £200 investment would be spent in 6 weeks on fags anyway. And I already got pg VG nick and scales from my last uneducated ramshackle attempt.

My only worry is flavoring leaching into and from the plastic.

That would ruin the whole thing I know lol.
I think if I just try it with 3 or 4 lighter flavours until Sunday when my main delivery arrives, if I get any hint at all that’s happening I will order a ton of 10ml bottles. Problem I’ve got is delivery, I’ve recently moved to London for work and I’m living in a strangers granny flat (garage conversion), and he’s not so keen on me getting things delivered to his house. If I can find bottles in the wild I will buy.
I did get food safe baggys though from a spice shop, fingers crossed they should do the job. thanks for you’re concern

If you get any FlavourArt or Inawara flavor concentrates, plan on doing those at 2% MAX. I mistakenly did a FA concentrate at 5 or 8% last week(Cookie/Biscotto)-Damn near killed my taste buds for two days. I had to snort a LOT of coffee to break that flavor fatigue!

Thanks for the heads up.

Quite welcome. I’m still fairly new to all of this as well. I only started mixing in January of this year, and that was after almost a full year of reading and digesting. I kept saying"maybe next month", but juice just got to be too damned expensive with the way I was plowing through it. So I ordered up some nicotine and a bunch of other stuff to get started, then jumped in feet first.

Here’s to a wild ride down the rabbit hole-Cheers!

Greetings and welcome and congrats on kicking the stinkys!

It sounds to me like you have an excellent plan and the baggie idea is brilliant. I’ll be interested to see how you do with it. The only criticism I have to offer is that with 9 testings per 5ml you’ll only be able to do .55 ml per test. Using a dripper you can probably get a good idea at .55ml but not in a tank IMHO. Regardless, you definitely seem to be keen on learning and willing to listen so I’m guessing you’ll be up to speed in no time.

Thanks. I’m still at it.
I’m using my old magma RDA from a few yrs ago for tasting em, always liked that one. Tanks just for work (kanger subtank mini & cloupor mini 30w)
My stash is updated and open if u fancy a nose.

I will start making them in 7ml , thanks for doing that maths.