Please stop correcting me about flavor names without checking first.
There are 2 versions of wild strawberry by Inawera:

@kamanza I know the guys who are laboring over cleaning up all of the flavor mis-namings here, are getting SLAMMED trying to keep up. I don’t know who was suggesting a correction, but PM’ing them is never a bad idea.

A quick check on INW’s website DOES show two versions of Wild Strawberry. Just remember the guys who are cleaning up the flavors, and database are doing it for ALL of us. 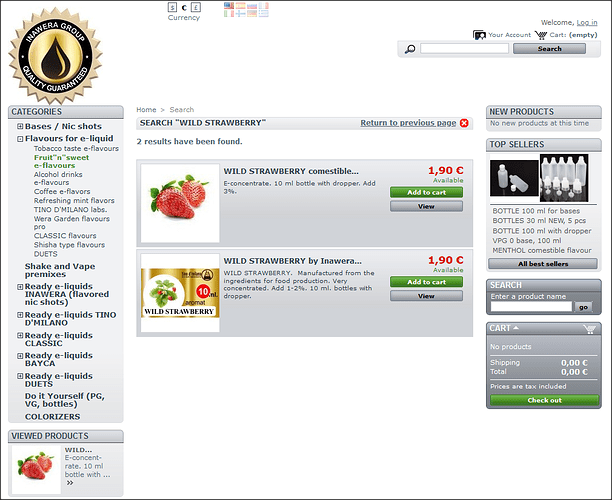 Thanks for helping to clear this up kamanza.

As already explained, flavor names in ELR’s database don’t always match the label on someone’s bottle. The simple solution of course is to perform a database merge on those flavors. Unfortunately database merge’s are rare and I’m powerless to do anything about it!

Speaking to the topic at large, but citing some points made here…

The simple solution of course is to perform a database merge on those flavors.

Which would be the wrong solution in many instances, and why I have to cross-check the manufacturer’s websites so frequently,
That and combined (yet sometimes limited) knowledge of the history of things/flavors and that changes have occurred… All adds up to a Herculean task that frankly, no one person anywhere is capable of keeping track of. Especially the longer that a given company has been in business. And especially depending on the individual company under scrutiny (in any given instance).

Some companies are great about announcing new varieties, others not at all, and frequently somewhere in between.

And then you have companies who remove flavors from even being listed (when they are out of stock). Inawera has a track record for this.

TZ made a mistake in the case you present above @kamanza. But he is trying to improve the user experience.

Not as rare as you seem to think.

I’m powerless to do anything about it!

And cases like this are part of what I’ve tried to explain to you in the past.

I spent hours in the database recently, both hand editing flavor names AND merging OoO shit, and didn’t make but a minor dent.
Now that doesn’t mean that I’m not trying, but it does mean that you have to understand a lot of the subtleties (such as the first post) involved.

I fought that fight for a long time, @kamanza. I was constantly told there was only one, which I knew wasn’t the case, yet resistance was constantly met. It wasn’t until I spoke with the Poland store about it, that my suspicions were confirmed.

A lot of people stay away from the standard WSB, but I remember being able to use the Tino version in a lot of mixes.

I don’t know what surprises me more, the fact that someone finally acknowledged this, or the fact someone read my comment about it

Right so Inawera has two versions of Wild Strawberry. The flavor Kamanza has listed is third (by sorted recipe count) on the DB list https://e-liquid-recipes.com/flavors?q=wild+straw+ina&sort=num_recipes&direction=desc Less than half as many as the second name, and a fraction of the top name, which is the TD version.

Since the TD version has been ruled out by the user, and if we follow the naming conventions, then the correct name can only be Wild Strawberry (Inawera) - #2 on the list. Which is what I pointed out to him after he stated his case and I retracted my original comment.

If I’m guilty of making a mistake it would be for failing to ask which of the two Wild Strawberries Kamanza was using before dropping the comment. The TD version appeared to be the logical choice. I’m only human FFS!

And cases like this are part of what I’ve tried to explain to you in the past.

You did indeed. But I have to disagree in this case because as I just explained above it’s in the name and the numbers. Not to mention the spelling of his selection is incorrect. Aside from the TD version, the remaining names would benefit from a merge to avoid confusion again Seems fairly cut & dry to me.

A lot of people stay away from the standard WSB

I suppose the reason for that is the fact that US & GB vendors only carry the TD version.
If you have eaten real wild strawberries, you’ll know that they are very different from the garden variety: they are not sweet, but tart-bitter & very aromatic. The original WSB concentrate closely approximates this taste in my opinion.

Since the TD version has been ruled out by the user, and if we follow the naming conventions, then the correct name can only be Wild Strawberry (Inawera) - #2 on the list. Which is what I pointed out to him after he stated his case and I retracted my original comment.

You’re absolutely correct, and I understand.
On the second go around, you were trying to point out that he was using the listing with 22 recipes, vs the listing with 54 recipes.
(It’s all been fixed BTW, including whoever added ‘flavors’ to the Poziomka listing. Which had to be hand edited of course.)

And in fairness, you’ve been learning to pick up on such matters better than before (judging by more recent submissions than previous).

Just for the record (for everyone) there’s a great deal of these types of special circumstance cases just waiting to bite someone in the keister. Be it someone trying to pick the right one (to add to their stash), or someone trying to submit dupes (to help out), to folks trying to keep on top of it all.

With 330,000± flavor numbers, there will ALWAYS be some number of incorrect entries. At least until the database is locked down. So in the past couple of years I’ve learned to not let it get to me (nearly as bad as it used to). I finally had to admit to myself that all that can be expected is to try and do what I can, where I can.

My request would be the reminder that everyone needs to cut each other some slack in the interim. Under the current implementation, it’s NEVER going to be perfect. (Both are things that I’m having to remind myself of, as well as to a while to learn, and then accept.)

But I have to disagree in this case because as I just explained above it’s in the name and the numbers.

And with your further information, I understand better what you were trying to say, as well as what led to all of this.

Aside from the TD version, the remaining names would benefit from a merge to avoid confusion again

I suppose the reason for that is the fact that US & GB vendors only carry the TD version.

Not true. When I first bought my Ina Wild Strawberry, I bought it at WizardLabs. It was not the TDM variant.

The problem is multiparty.

… or someone trying to submit dupes (to help out)

That USED to be me

there will ALWAYS be some number of incorrect entries. At least until the database is locked down

And that’s when I’ll restart.

And that’s when I’ll restart.

If you mean tackling the Dupes…start now. It’s lonely in The Masochist’s Club!

I Just want to say, THANK YOU, to You, and ALL the other people that organize and reorganize the never-ending assloads of information. I (we) do NOT take for granted the countless hours you contribute to help maintain the creditability of the information that we count on. Thank you for keeping the info. we all want and need, cohesive and accessible. We know it must be a never-ending shitstorm, so thank you. Thank you, from those of us that would still be staring, blankly at the mess of shit covering the table with no idea what to do next. I, we appreciate all the TIME, EFFORT, and ENERGY you give, so willingly to the Vaping community, indeed from the bottom of my heart. We could never repay you for the monstrous supply of content you so openly share. You and your team, (thank you leaders) earn a GOLD STAR, every day! Not many people over the age of 8 can achieve a gold level, so remember that:) I would still be at a loss of what to do with the messes of tanks, mods, batteries, RDAs, coils, cotton, wire, flavor concentrates, gallons of PV/PG, and everything else vape, and vape DIY if I hadn’t found this site, true story! Anyway, Thank you. So, when your HUMANNESS shows through DON’T worry about it, we are ALL human, {though some often forget}. Thank you to everybody that contributes to making this site what it is. Storytime over, sorry. Sorry for posting this here, I’ve been wanting to thank someone for some time and didn’t know where or to who.

Nice to see the kind words! Everyone appreciates the shout out.

I (we) do NOT take for granted the countless hours you contribute to help maintain the creditability of the information that we count on.

Sadly, just about everyone who is exclusive to the recipe side actually never even thinks about the effort that the Brave Warriors spend there correcting and maintaining. It’s only when folks make it to the forum and read about it that they begin to realize the herculean task they try to tackle!

Appreciate your thoughts and insights.

I hear ya but, IDK? NOT ME! Someone had to have the idea, resources and know-how to make it happen:) The minute I figured out what I was looking at I KNEW there were some somebodies to thank! Somebodies who love vaping and want to share their findings and thoughts with the rest of the vaping world, and in doing so have dedicated hours of their time to make it happen. That said, I didn’t realize there was another part to the recipe app for a minute, I think that probably happens often. I wonder what could be done to change that? I felt very alone in the vape world 'til I figured it out to come here.

Oh, I didn’t mean you! You clearly stated your position. I was just trying to say that most people really don’t think much about the bones under the body there. @daath has built a great resource there, and here. @Sprkslfly and @TorturedZen spend an almost un-quantifiable amount of time and energy there, and they have our undying appreciation (and sorry if others do that I failed to mention).

I felt very alone in the vape world 'til I figured it out to come here.

Well, you’re here now, so hop in the pool and stay a while!

I was just trying to say that most people really don’t think much about the bones under the body there.

Ur right, so many people have forgotten that we are not only capable of thinking on our own, but meant to, so they only see whats on on the surface, all the good, true stuff is under, not even hidden yet so many don’t look or pretend to not know. Things are changing though:}

It’s not very often that the winds of recognition or appreciation blow our way on the recipe side. Many users there are just getting their feet wet and don’t mind getting a bit of unsolicited help in terms of the naming conventions. Then of course there’s The Few, The Proud and The Ignorant types. You know…the one’s that attend Covid-19 parties because they can’t be told anything!

So anyway I’m going to just say thank you for the uplifting words. It’s nice to hear positive feedback for a change!