I have been vaping for a few months and use a kayfun lite. I want to do high VG but am unable to go over 50% VG without getting dry or burnt hits. Question is alcohol or distilled water and what percentage do I add to my recipes for 70vg/30pg?

Thanks Ken_O_Where, I am surprised at the small quantity used as I have read in other places people are using 10-20% which seemed to me as a whole lot of diluting. How could they use that much and have any flavor left is beyond me.

I honestly dont know, even those couple drops dilutes the flavor more than say PG would because PG carries the flavor so well. Too bad we couldnt get someone like Velvet Cloud to chime in since they use DW instead of PG. But this works very well for me.

I’ve diluted my VG with both vodka and distilled water (not at the same time - separately) - You can use up to 10%, but my suggestion is to thin it gradually, so you know what works for you.

Another suggestion is to use rayon for wicking - Just roll it up real tight - get as much rayon in your coil as possible - it wicks beautifully.

Thank you Daath I will take your suggestions with DW and look into rayon as a wicking material. I now use Japanese cotton.

I have a question. Just so happens that just today I learned that you can, they call it hydrate your VG with just a few drops of Distilled water. This is at times essential to maintain glycerin. Glycerin will actually absorb moisture from the air just by opening your bottle and exposing it to the air. Ok this makes me assume you can hydrate your VG and still say you are blending a 70/30 mix. OK but what of vodka. I have always assumed that Vodka was considered in the OTHER category. For instance 70% VG 10% Vodka/Other 20% Flavor. Now maybe I’m being literal but when I hear diluting VG up to 10% I then assume this 60% VG 10% Vodka 10% PG 20% Flavor. Guess I’m in need of clarity…

I think you are right. If you calculated a 70/30 mix it would actually be 65/25/10 and then the flavors would be added into the equation. The flavors would not affect 10% vodka needed in the mix.

There are two ways to dilute your VG. Add it before you mix, or during. ELR supports the former method. Where “Water/Vodka/PGA” is added to your mix (in total % of the recipe volume). If you use the first method, and use VG that has already been diluted (say you bought Aquous VG), you just add that as VG (but the numbers would in fact be wrong - low on VG)…

Get Goblin instead of Kayfun and vape max VG (:

Yes, exactly my thoughts. I felt that should the VG be diluted at 10% the number would be wrong since the added solution would actually take away from the amount of VG in the blend. Thanks for clearing that up… You threw me for a loop at first…

Did you say u know of someone who uses DW in place of PG ? Hmm I’d like to know how this turns out.

I use it occasionally. Got to be very careful even a couple drops too many will alter the taste radically. Ive never had to use more than a few drops per 30ml. Velvet Cloud uses distilled water instead of PG. I love their liquids muchly!

Yea I’ve used it in a recipe to dilute the vg some but never have I heard of DW being used to replace the PG if that’s what you say velvet cloud is doing ? I need to check them out.

Yep, thats what they do. Their flavorings are all VG based so they use DW to thin it out. I love their juices. VCV, Gunners Gold and Cafe Ecig are the standards by which i measure my own DIY juices. Nutty Cookie and Night Shift are two of my favorite juices. Night shift is coffee + chocolate donut, my first impression was, “this is awful” yet i couldnt put it down. I went through the 5ml sample in about an hour. I havent run out of it since.

I highly recommend their liquids.

No problems with wicking ? I vape only but a high vG juice will not wick on certain atomizers in my past experience aspire coils kanger coils smoktech coils all have had issues with in the past.

None at all. I drip it and run it though my Aerotanks, with rebuilt .6-.7ohm coils, without any issues at all. Their juices have incredible flavor and great clouds. I have placed a total of 26 orders and not a single issue. Those three companies are the only vendors i still buy from.

From their FAQ section:

Q: So - these are made with a complete Vegetable Glycerin base (FULL VG)? I have never had that before… That sounds very thick… is it? Will it work in my tank or carto?
A: These are indeed all VG, Organic & Naturally flavored, Home made, hand-brewed, and full of love. But we have a secret sauce that means they will work fantastically in your tank or cartomizer: We use distilled, deionized water to thin our VG base in house. Just the tiniest bit, so while there isn’t propolyne glycol (PG) added - they will still wick well, and move through an e-liquid tank just fine because that perfect drop of water will help the texture.

Awesome !!! Imma get some of those eventually when I do buy commercial juice. Yay !

I would be careful using rayon as it can be toxic if not properly manufactured.

The fibers are usually bleached to make them white which produces dioxin and is toxic to humans – if
not properly addressed in the manfufacturing process there could be traces amounts of dioxin in the finished product. 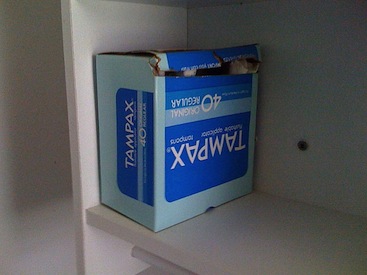 Rayon: What You Need to Know About this Fiber and Your Health

Women have quite a few considerations men never have to face, namely our monthly menstrual cycle. While chocolate can relieve some menstrual frustration, the...